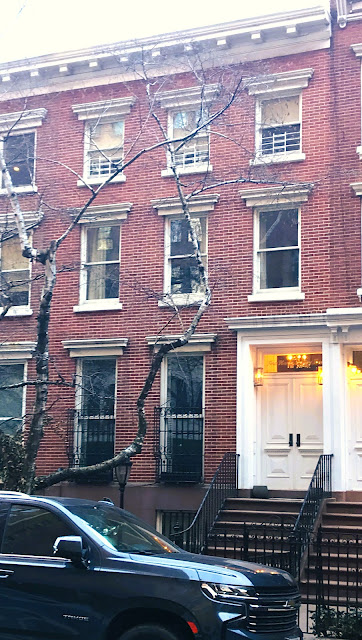 The 1811 Commissioners Plan that laid out on paper the grid of streets and avenues above 14th Street foreshadowed the end of sprawling country estates like Clement Clarke Moore's Chelsea Farm.  The estate was named after the Chelsea Old Church in London attended by Moore’s grandfather, Thomas Clarke.  Around 1818 Clement Clarke Moore began parceling off the property as building lots.
Beverly Robinson was the lawyer of the Clarke and Moore families as well as a close friend.  In 1820 he acquired the plots stretching along 24th Street from Ninth to Tenth Avenues.  Robinson recognized the potential of the land as the city crept northward.
In 1849 the magnificent row of Greek Revival townhouses, called London Terrace, designed by Alexander Jackson Davis, was completed on the corresponding block of 23rd Street as the Chelsea neighborhood rapidly developed.
Robinson sold the 24th Street land to George F. Talman on April 24, 1849, while retaining an interest in the speculative homes to be built there.  The pair commissioned local builder Philo V. Beebe to erect a series of twelve paired brick homes that same year.  Completed in 1850, they sat back from the sidewalk behind cast iron fencing that gave the houses—like the elegant London Terrace homes—front yards, a luxury in Manhattan. 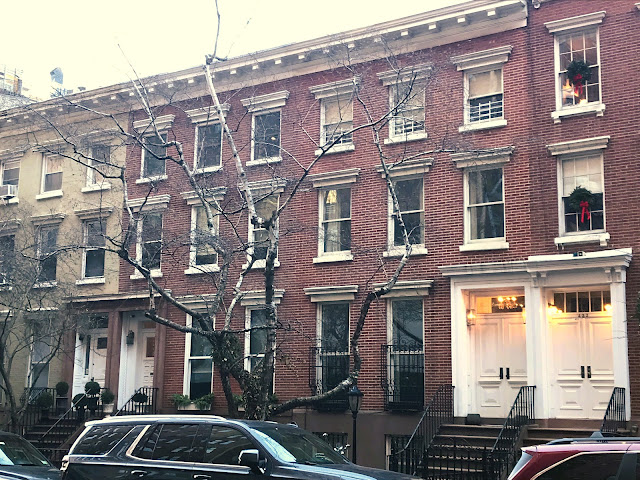 The homes were designed as mirror-image pairs.  455 West 24th Street is second from right.
Among the row was 315 West 24th Street (renumbered 455 in 1868).  Like its neighbors, the 21-foot-wide house was faced in brick and rose three stories tall above an English basement.  The architect straddled the waning Greek Revival and rising Italianate styles in his design.  The framing of the entrance reflected Greek Revival, while the absence of sidelights tended toward Italianate.  And while the third floor windows were slightly shorter than the lower floors, they were not the squat versions seen in earlier Greek Revival homes.
The marriage of styles continued inside.  The staircase newel post and balusters were purely Italianate, as were the sumptuous parlor and dining room chandeliers.  The eared woodwork and veined black marble mantels, however, were quintessentially Greek Revival. 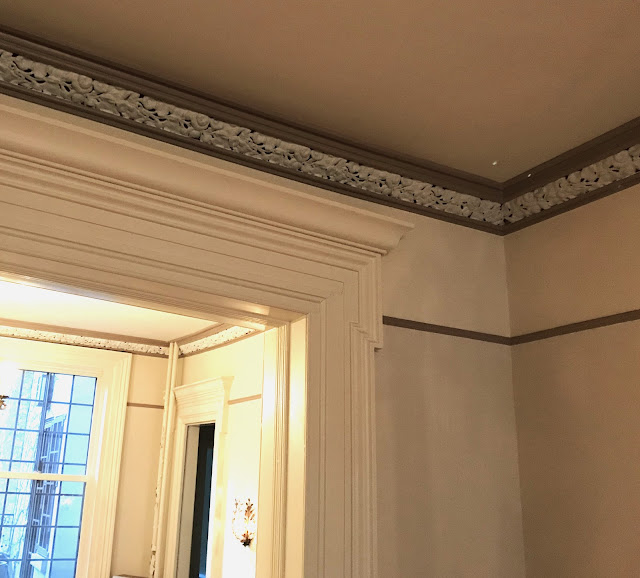 The eared woodwork, while touted as "pure Greek," actually had its origins in ancient Egypt.
The house was purchased from Robinson and Talman in March 1850 by investor William Ward.  He leased it for a year, and then in April 1851 listed it for sale at $5,100 (approximately $186,000 in 2023).
At the time Daniel Jones Barney, who operated a porterhouse at 185 West Street, lived on Charlton Street.  A porterhouse was an "eatinghouse" or restaurant, where malt liquor such as porter was sold.  In 1858 he purchased the West 24th Street house.
Born in Massachusetts in 1822, Daniel married Margaretta Ward in 1845.  They had two children, Augustus Whiton who was ten years old, and Minnie who was five when they moved into the house.
The Barneys took in a boarder, John Wood, the first year they lived here.  An actor, Wood was, no doubt, happy to find a family willing to accept him, since people in the theatrical profession had difficulty finding lodging. 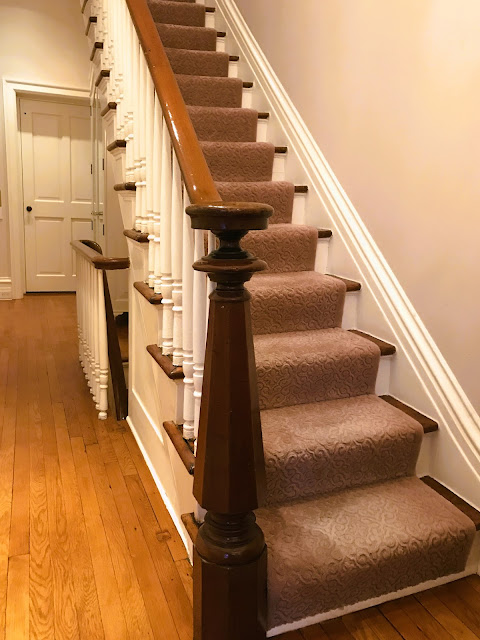 Daniel Barney expanded his business in 1861 by acquiring a hotel at 206 Chambers Street, and by adding a brewery at 356 Greenwich Street to his holdings in 1868.
By 1871 Augustus was old enough to venture into business and was listed as a fruit dealer that year.  The address of his fruit stand at 204 Chambers Street suggests that it was somehow connected with his father's hotel.  He seems to have succeeded, and in 1871 was running the hotel.
On May 12, 1874, Margaretta hired a new servant, Caroline Meyers.  She and the other servants lived on the top floor.  In the early hours of the next morning, Caroline slipped downstairs before anyone was awake.  The New York Herald reported, "One of the other servants came down stairs and found the hall door open, and she also missed a quantity of table cloths, pianoforte cover, napkin rings, plated forks and spoons and sundry other articles, in all valued at over $100, which had been in the dining room."  (The value would equal about $2,500 today).
Margaretta called a policeman and the search for "the absconding Caroline," as worded by the New York Herald, was initiated.  She was arrested the following month and pleaded guilty to the theft.  The district attorney told the judge "that this prisoner was a notorious house thief."  Caroline Meyer was sent to the State Prison for four years. 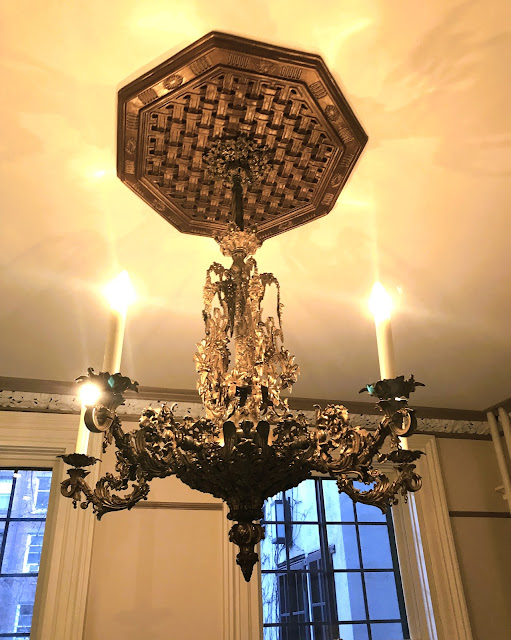 Margaretta died on December 27, 1888.  Five months later, on May 5, 1889, Daniel died.  The estate sold the house at auction on October 23, 1889 and it was purchased by the Barney's boarder, Emil Stork, for $10,100--just over $300,000 in 2023 terms.
Emil ran a cigar-making operation at 194 Greenwich Street.  He and his wife, the former Elizabeth Boell, had a daughter, Elizabeth and a son Augustus.  Emil's devotion to his daughter had nearly gotten him into serious trouble a few months earlier.
He returned from a business trip to Germany on August 10, 1889.  Tobacco magazine reported, "He passed his luggage all right, but on his effusively presenting his daughter, who came to meet him, with a box from his pocket sent as a souvenir from old country friends, the customs officers took a hand in the case."  Stork's enthusiasm was so marked that it had sparked suspicion.   The officials opened the box and found "six gold breast pins, five fine stone rings, three pairs or earrings, seven scarf pins, a pair of bracelets, and ten charms."  Tobacco said, "If he had kept quiet until he got home all would have been well; as it is the box is in the Barge office seizure room, and Mr. Stork is in trouble."
As it turned out, the nerve-wracking incident and Stork's being suspected of smuggling had a happy ending.  On August 30 the magazine reported, "The Secretary of the Treasury has directed the return to Emil Stork of the trinkets seized on his arrival from Europe a few weeks ago.  The jewelry was intended as a present for Mr. Stork's daughter." 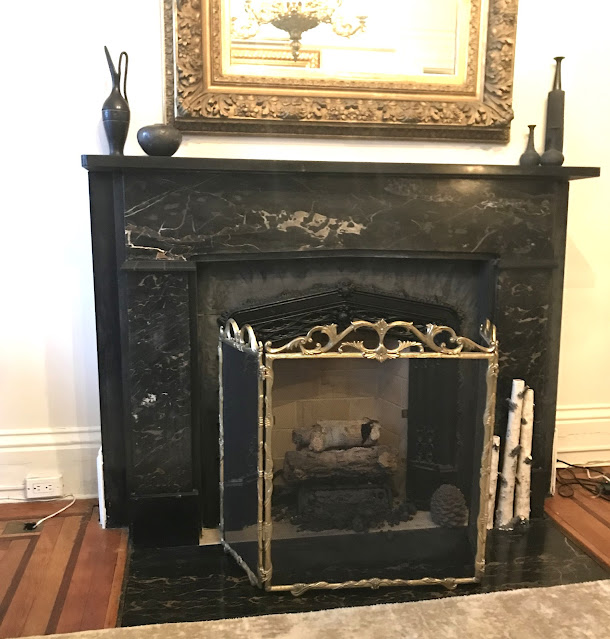 Matching Greek Revival style mantels sit in the parlor and dining room.
As the Barneys had done, he and his wife Elizabeth took in select boarders.  Living with the family in 1891 was James Edwards and his wife.  He was the assistant cashier of the Hoffman House hotel until December 21 that year, when he accepted an offer from Julia Sharpe.
Mrs. Julia Sharpe opened what The Evening World described as a "private banking business" in her home at 42 East 23rd Street.  She bought and sold diamonds and converted foreign currencies to dollars.  She made Edwards her cashier.  On March 12, 1892 The Evening World said, "Edwards's acquaintance with hotel men aided him in his work, and apparently he made a good manager for Mrs. Sharpe's business.
Things went well until March 10, 1892 when Edwards collected $400 from Brown Brothers on Wall Street.  On the way back uptown he lost the money--a significant $12,300 by today's conversion.  Although he retraced his steps, he could not find it.  When he told Mrs. Sharpe what had happened, she exclaimed, "You stole it!", grabbed a large revolver and demanded, "If you don't give me that money, I'll shoot you!"
Edwards went home to 455 West 24th Street where he wrote an advertisement offering a reward to be placed in a newspaper.  The following evening Julia Sharpe "in company with an English army officer and Detective Hayes" knocked on the door of the Stork house to arrest him.
The Evening World reported, "Mrs. Edwards, a comely young woman, went into hysterics when she heard the accusation, and not until a physician had restored her was her husband taken away by the officer."  The next day in court, Julia Sharpe not only charged Edwards with stealing the money, but "also a set of diamond earrings worth $600.  She made other serious charges against the young man," said the newspaper.
The Storks, it seems, believed Edwards's story.  Emil posted the $1,000 bail to release his boarder from jail.  Julia Sharpe was not done with Edwards, later accusing him of hiring thugs to burn down her house.  In the end Edwards was acquitted and, ironically, on October 21 it was Julia Sharpe who was defending herself in court.  She was accused of having helped dispose of stolen diamonds.
After having lived in the house for more than three decades, Emil Stork died here at the age of 82 on May 31, 1920.  His funeral was held in the parlor two days later.  Elizabeth would remain in the house for a little more than a decade.
In December 1932, she borrowed $3,000 from the Metropolitan Life Insurance Company.  The New York Evening Post explained, "the money [is] to be used in making necessary permanent improvements" to the house.  The updating seems to have been part of negotiations in selling it.
As had been the case with the Storks, the Reilly family had  already been living at 445 West 24th Street when they purchased it from Elizabeth Stork.  Born in 1896, John G. Reilly was an attorney.  He and his wife Elsie had a daughter, also named Elsie.
The younger Elsie not only followed her father's footsteps professionally, but became a partner in his law firm, renamed Reilly & Reilly.  Following her marriage to George A. Nelson, Jr., the couple moved into the 24th Street house.  Elsie continued her legal career as Elsie Reilly Nelson.
John G. Reilly died at the age of 83 on July 2, 1979.  Somewhat surprisingly, as had been the case with Emil Stork half a century earlier, his casket sat in the parlor until his funeral on July 4.  Elsie S. Reilly died two years later.
At some point Peter Bacon acquired the property.  He retained possession until 2006.  Because only a handful of families have owned the house over its nearly 175 years, it is in a rare state of preservation.  It survives as an important component in a the charming 1850 row.
photographs by the author
no permission to reuse the content of this blog has been granted to LaptrinhX.com
Posted by Tom Miller at 1:00 AM