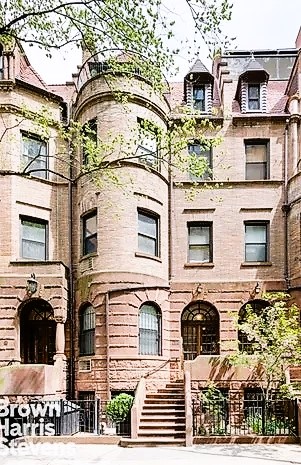 A partner with Edward H. Clark in the architectural firm of Berg & Clark, Charles Berg also operated on his own as a real estate operator.  In 1887 he began construction of a row of five upscale homes on the north side of West 82nd Street, between Riverside Drive and West End Avenue.  Each cost $15,000 to construct--roughly $441,000 by 2023 standards.  Berg & Clark designed the row in a modified version of the Romanesque Revival style.

At the eastern end of the row, 307 and 309 West 82nd Street were nearly mirror images of one another.  Each 20-feet-wide, their stone stoops gently curved upward to a single porch shared by the arched entrances.  The rounded bay of 309 rose three stories to a balcony in front of the slate shingled mansard. 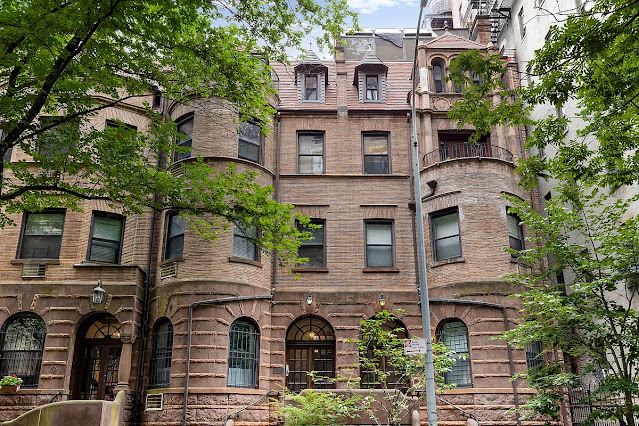 The upper floors were clad in what is known as Tiffany brick.  image via streeteasy.com
There was apparently a deal struck between Berg and the builder, Charles T. Wills, for when the homes were completed Wills held title to 309 and moved his family in.
Wills had come a long way since he started his career at the age of 17 as a bricklayer.  He was the founder and president of C. T. Wills, Inc., which erected structures like the New York Stock Exchange, the Chamber of Commerce, the Morgan Library, the American Surety Building, and All Angels' Church among many others.  He was, as well, a vice president of the Garfield Safe Deposit Company and a director in a bank and the United States Mortar Company.  Wills and his wife, the former Carrie Russell, had two sons, Ernest C. and Charles S., and a daughter Ruth.
Seven years after moving in, Wills brought Berg & Clark back to enlarge the house.  Their plans, filed on July 20, 1894, called for a one-story extension to the rear. 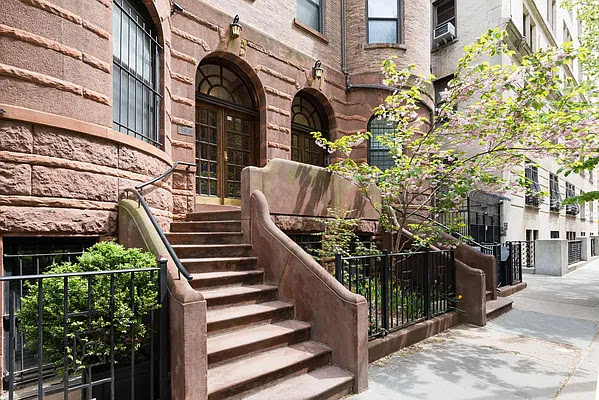 The two stoops curve gracefully to the shared porch.  image via streeteasy.com
The family's summer home was in Belle Haven, Connecticut.  Along with his many memberships in Manhattan clubs--the Union League, West End, and General Society of Mechanics and Tradesmen among them--he was a member of numerous clubs in the country.  He held memberships to no fewer than four yacht clubs, two riding clubs, and the Fairfield County Golf Club.  He was also a member of the Westchester County Horse Show and the State Road Horse Associations.  It may have been his decidedly non-urban passions that prompted him and Ruth to move permanently to Connecticut at the turn of the century.
They leased 309 West 82nd Street to Frederick R. Wood, the senior member of F. R. Wood & Son, carriage builders.  Born in 1825, he had served in the Washington Grays militia unit during the 1850's.  Wood's health was not good when he signed the lease, and he died in the house on March 2, 1900 at the age of 75.
The following year, attorney Hugo S. Mack and his wife leased the house.  He and Wills most likely knew one another professionally, since Mack's clients included major builders and contractors and he dabbled in real estate, as well.
He and his wife Ida Abagail Woolf had two children, Alan Winthrop and Marjorie Faith.  Like all wives of affluent husbands, Ida was involved in charitable causes and in 1903 was secretary of the Ladies' Bikur Cholim Society and the Industrial School for Poor Girls on East Broadway.
On May 23, 1908 Charles T. Wills sold 309 West 82nd Street at auction.  The listing said, "Property contains 14 rooms and 3 baths, wine cellar, billiard room, library, cabinet finish and trim, rosewood, &c."  It was purchased by Virginia Potter for just over 1 million in 2022 dollars.
She resold it two years later to Isaac George Waterman, who transferred the title to Daisy Greene a week later.  His generosity, no doubt, caused more than a few raised eyebrows.
Daisy Greene was born in Leeds, England in 1885.  In 1900, at the age of 15, she became one of the original Florodora girls.  The show was enormously successful, making the girls superstars of their generation.  After performing in light operas in London on her own, Daisy came to New York City and was a member of the 1908 Ziegfeld Follies. 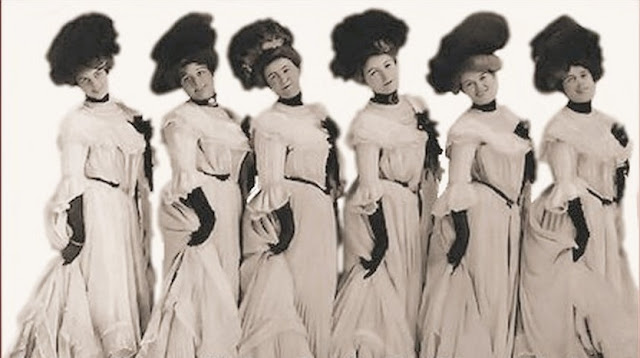 Daisy Greene is the second from left in this photograph of the Florodora Girls.  (original source unknown)
Daisy and Isaac Waterman struck up a romance.  His lavish gift of a costly house may have raised suspicions about how far-reaching their affair was.  And those suspicions were no doubt strengthened when Daisy identified herself as a married woman in a help-wanted ad on October 4, 1911:

Useful and willing white girl to do homework and can help as maid; city references.  Call between 11 and 2.  Mrs. Greene, 309 West 82d.

Any gossip that may have followed was squelched when the couple married in 1914.  Living in the house either at the time or directly afterward were Daisy's parents, Herman and Cecilia Greene.  Herman died here on August 3, 1915.
That year Isaac and Daisy purchased the house next door at 311 West 82nd Street.  They would lease the property for years as rental income.
Unlike many female entertainers, Daisy had continued her career after marriage.  On March 12, 1920, Marguerite Mooers Marshal, writing in The Evening World, followed up on the original Florodora Girls.  She wrote, "Daisy Greene, the other New Yorker, took some lucky Wall Street flyers, and graduated into comic opera, in which she has been a successful prima donna."
Six months after that article, on September 7, Isaac George Waterman died in the West 82nd Street house.  His funeral was held in the parlor two days later, followed by a mass at the nearby Holy Trinity Church.
Daisy's year of mourning had barely elapsed when gossip spread that she not only was romantically involved, but married.  She had traveled to Rome and, according to the Daily News, rumors arrived in New York by cable "that Mrs. Waterman, while abroad, had married Prince Virginio Orsinia, of Italy."  A reporter visited Daisy at 309 West 82nd Street to find the truth.
In an article on September 27, Daisy "admitted the Prince had been a 'most persistent wooer.'"  She said, "The Prince, who is a member of one of the oldest and best families in Italy, proposed to me a number of times.  My friends are at [a] loss to understand why I refused his offers."  But, although English by birth, she explained, "I am too much of an American to marry a foreigner for the social position his title and rank might give me."
In May 1925 Daisy sold both 309 and 311 West 82nd Street.  They became Miss Ferguson's Residence, a closely chaperoned boarding house for the daughters of wealthy families in New York for schooling.  An advertisement in House & Garden described it as, "A home of exclusive patronage for girl students attending school, college or special courses in New York."  While both houses received "extensive improvements," according to The New York Times, they were not joined internally.
The two residences were sold at auction in 1932, after which time 309 West 82nd Street was operated as a rooming house.  Then, a renovation in 1953 resulted in combination of apartments and furnished rooms.
Among the tenants in 1955 was actor Lee Hays.  The well-rounded thespian worked in television, films and live theater.  In July that year he received a subpoena from Francis E. Walter, chairman of the House Un-American Activities Committee.  The committee was formed in 1938 to investigate subversive activities.  By now it was widely-known for targeting the entertainment industry and its investigations often resulted in an actor's being placed on the Hollywood blacklist.  Happily, at least for this Lee Hays, the committee had sent the subpoena to the wrong man.   The intended recipient was folk singer Lee Hays. 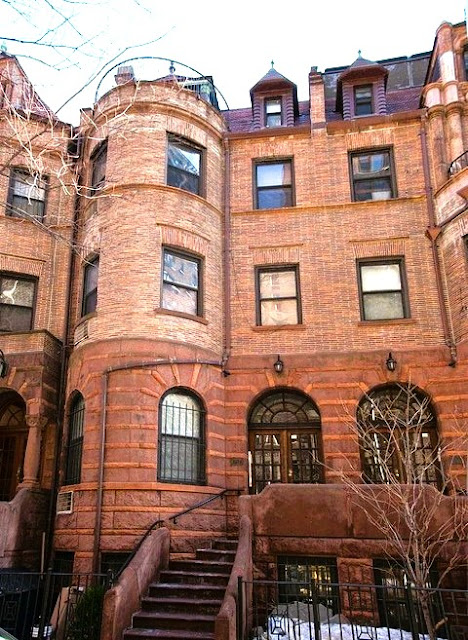 image via douglaselliman.com
A remodeling completed in 2014 resulted in a penthouse unseen from street level, and a total of 15 apartments.
no permission to reuse the content of this blog has been granted to LaptrinhX.com
Posted by Tom Miller at 1:00 AM