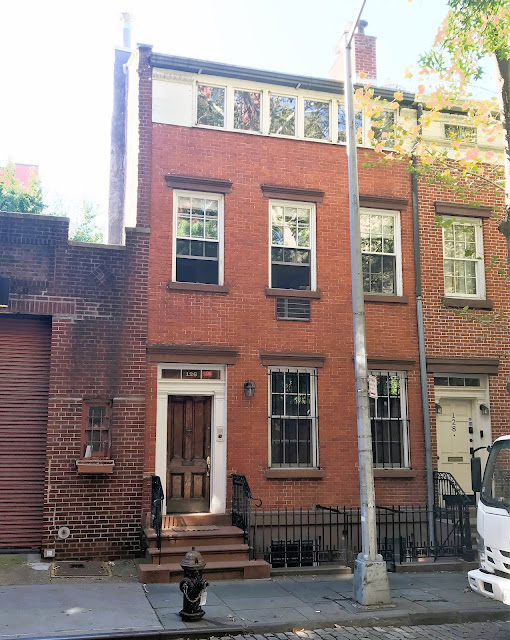 The original configuration of the attic windows can be glimpsed in the house to the right.
In 1837 Jacob G. Dyckman erected a row of three speculative houses on Bank Street, between Washington and Greenwich Streets.  The 53-year-old was a descendant of Jan Dyckman who established his farm in upper Manhattan in 1661.  A director of the Northern Dispensary, he was active in politics, having been elected to the state legislature in 1828, and holding the position of alderman when he began construction of the Bank Street houses.
Two-and-a-half stories tall and faced in Flemish bond brick, the houses were examples of the emerging Greek Revival style.  A short brownstone stoop led to the single-doored entrance, flanked by paneled pilasters.  A three-paned transom allowed daylight into the entrance hall.   Squat windows punched through the fascia board at the attic level.
Dyckman retained possession of the houses, leasing them as rental properties.  His first tenants in 116 Bank Street (renumbered 126 in 1866) were unmarried sisters Amelia and Elizabeth Felter, and Aaron B. Pell, a grocer on Washington Street.
Despite his busy civic schedule, Dyckman was actively involved in real estate.   That was evidenced on February 28, 1840 when he advertised two commercial properties for rent, and three residences, including "the new two-story brick house, No. 116 Bank street."  His new tenant did not stay especially long.  In April 1843 he advertised this house and the one next door to let.
His next tenant was retired coal dealer John A. Boyce.  By the early 1850's a Mrs. Robinson operated the little dwelling as a boarding house.  An advertisement in the New-York Daily Tribune on August 14, 1852 offered, "Two fine, airy furnished or unfurnished rooms to let, with good board, suitable for two gentlemen and their wives.  Also, good accommodations for a few single gentlemen.  Privilege of bath, &c.  Address Mrs. Robinson, No. 116 Bank-st, near Abingdon-square."  Her boarders in 1853 were Benjamin F. Britton, a fancygoods dealer at 149 Broadway; and bookseller Joseph Wilson.
In 1855 Jacob G. Dyckman sold 116 Bank Street to builder Albert G. Bogert.  While Bogert's contracting office was located nearby at 105 Bank Street, he seems to have operated the real estate operations of the business from his home.  An advertisement on February 28, 1859, for instance, read:

To Let--The upper part of house 52 Bank street, consisting of six rooms, with wardrobes, and all modern improvements, to a small, genteel family.  Inquire of A. G. Bogert, 116 Bank street.

Samuel Edsall owned the property following Bogert.  Like Dyckman, he did not live in the house, but leased it.  It was being operated as a rooming house by 1883.  An advertisement that year listed accommodations ranging from $2 to $4.25 per week, the most expensive equaling about $119 in 2023.
Renting a room here in 1888 was 21-year-old Lizzie Wood.  She had taken care of her paralyzed father, William Van Winkle, until he was removed from their home at 44 Commerce Street to a hospital.  Around that time she met Joseph Wood, an ice vender, and after a short courtship, they were married.
It did not take long for Wood's abusive personality to emerge.  The New York Herald wrote, "She regretted the act before a month was over, and only found temporary relief when her husband was given a short term for burglary."  When he was released, he promised to change.  According to the New York Herald on August 29, 1888, "his wife tried to encourage him in this resolution.  He retaliated by beating and abusing her, until a month ago, when she left their home."
A friend of Lizzie found her work as an actress in a play on Staten Island, and she rented a room at 126 Bank Street.  But, as is often the case with abusive spouses, Joseph Wood was not about to let his wife walk out on him.  On August 27, 1888, Lizzie returned home from Staten Island.  Wood was waiting for her in the hallway.  The New York Herald reported, "He struck her a brutal blow in the face.  He kept on striking her until she was one mass of bruises.  When the ruffian was satisfied he left hurriedly and escaped."
Lizzie managed to drag herself to the rear stairway leading to the basement, where she remained "in agony" all night.  Another renter who was going to the rear yard the next morning around 8:00 discovered her.  "Her lips were swollen so she couldn't talk, and it was with difficulty that she could give any explanation of her condition," said the article.  Another tenant helped to move her to her room, and then an ambulance transported her to St. Vincent's Hospital.  There doctors doubted that she would survive.  A search was launched to find Joseph Wood.  "It is believed that he is hiding in Jersey City, and the police there have been requested to look out for him," said the New York Herald.
The heirs of Samuel Edsall sold the house to William Conklin on March 1, 1894 for $7,000 (about $227,000 in 2023).  It continued to be operated as a rooming house for decades.
Renting a room here in 1935 was 26-year-old Irving Eckholm, whose drinking got him into trouble.  He told police that on the night of September 13, "while wandering between one bar and grill and another," he met 20-year-old dishwasher, Henry Kozak on Third Avenue between 17th and 18th Streets.  The Brooklyn Daily Eagle wrote, "He treated Kozak to several drinks, then left to visit a friend in Flatbush."
When Eckholm got off the subway at the Newkirk Avenue station, he realized that Kozak had followed him.  Kozak demanded money.  The two got into a fist fight, during which Kozak escaped with Eckholm's wallet and his spectacles.  (The wallet contained only 53 cents.)  Enraged, Eckholm opened a police alarm box, and gave a description of Kozak, who had fled into the subway.
Using red lanterns, police stopped the train at the next station and arrested Kozack.  He was charged with assault and robbery for his 53 cent larceny. 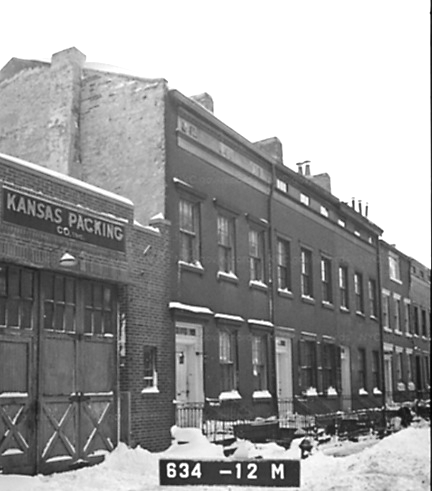 As late as 1941 the original attic windows were intact.  image via the NYC Dept of Records & Information Services
Artist Bruce Handiside Mitchell and his wife Olivia Dehn moved into 126 Bank Street in the 1940's.  Born in Tayport, Scotland in 1908, his works now hang in venues like the University of Arizona Museum of Art and the Smithsonian American Art Museum.  It was most likely Mitchell who renovated the attic floor to a studio, with a wall of windows that flooded the interior with northern light.  Mitchell died in 1963. 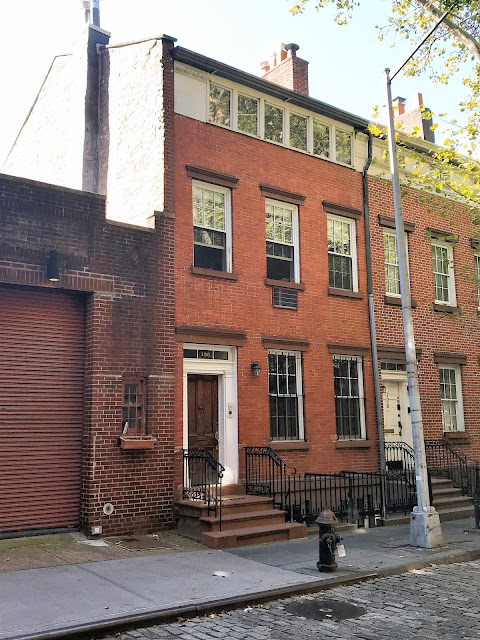 The charming house remains a single family home today, part of Jacob Dyckman's remarkably intact trio of 1837 houses.
photograph by the author
no permission to reuse the content of this blog has been granted to LaptrinhX.com
Posted by Tom Miller at 1:00 AM