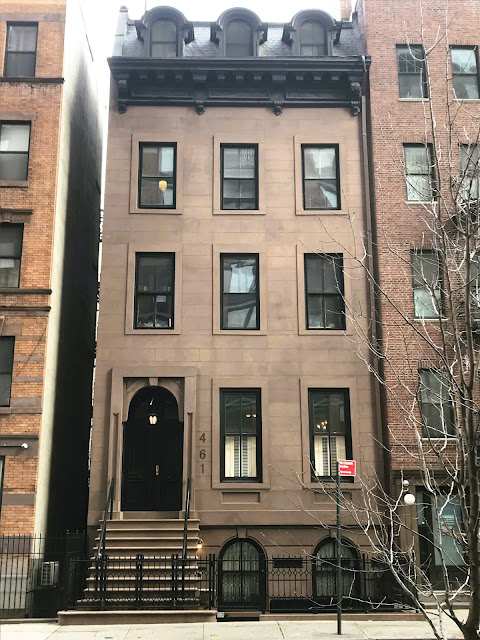 In 1843 Michael Schweyer was described by the New York Daily Express as a "German porter-house keeper at 11 Frankfort Street."  It was around that time that a row of handsome brownstone-fronted homes were built along the north side of West 43rd Street, between Ninth and Tenth Avenues.
The houses sat on land that was originally part of John Leake Norton's extensive farm, 70 acres of which had been purchased by John Jacob Astor I and William Cutting prior to 1807 in anticipation of the city's expanding this far north.  The neighborhood that would become known as Hell's Kitchen would be blighted with shanties, taverns and crime following the Civil War, but for now it was still respectable.
Like its identical neighbors along the row, 461 West 43rd Street was 25-feet-wide and three stories tall above an English basement.  The arched entrance was originally capped by a pediment upon scrolled brackets, and the windows wore molded lintels.
In 1868 Michael Schweyer purchased 461 West 43rd Street.  The move was convenient, since he had recently established A. & E. Schweyer, a malt manufacturing business, three blocks away at 530 Tenth Avenue.  His partners in the venture were his sons, Edward and Adolph.
Also living in the 43rd Street house with Michael and his wife, Margaretha, was Adolph, the younger of the two sons.  (Edward and his wife moved to 467 West 43rd Street, just three houses away.)  The population of 461 West 43rd Street increased by one on May 16, 1871 following Adolph's wedding.  Anna M. Schweyer moved into the house with her new husband's family.  It was around this time that a stylish Second Empire style mansard was added, greatly increasing the interior square footage.
Michael and his sons were Masons, all members of the Copestone Lodge.  The affluence of the extended family was evidenced when they attended the lodge's annual ball on February 14, 1872.  The New York Evening Express noted that "prominent among the ladies" were Edward's and Adolph's wives.  "Mrs. Edward Schweyer [wore] dark brown silk, powdered hair, emeralds; Mrs. Adolph Schwyer, dark blue silk, en train, trimmed with heavy overlaps of white point lace, white illusion overskirt."
Tragically, Adolph's and Anna's lives together would be short.  On June 20, 1874, Anna died at the age of 30.  Her funeral was held in the parlor two days later.
There would be two more funerals in the Schweyer house before the decade was out.  Michael died at the age of 74 on November 29, 1876, and Adolph died "suddenly" at 43 years old on April 26, 1879.  Margaretha moved in with Edward's family soon after Adolph's funeral.
John E. Hasler briefly leased 461 West 43rd Street.  It next became home to the family of James F. Wiley.  The parlor was again the scene of a funeral after the Wiley's four-year-old son, Leroy Filkins, died here on May 31, 1883. 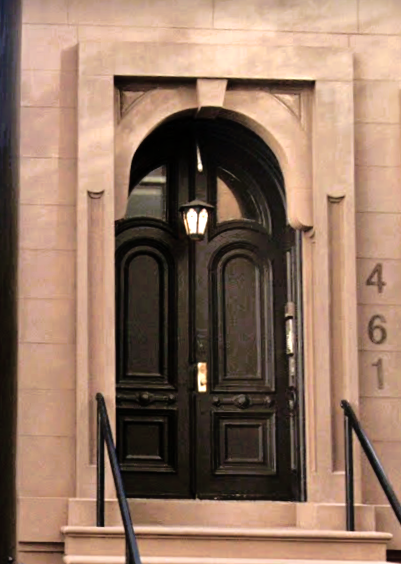 Although much of the detailing has been lost, the original Italianate entrance doors survive.
William B. Lundie, the superintendent of the 42nd Street Station of the Consolidated Gas Company of New York, next occupied the house.  A Civil War veteran, he had been discharged after being wounded in action on March 1, 1863, but the determined 21-year-old soldier re-enlisted on February 14, 1864, serving in Co. B., 1st Battalion.  Wounded again, he was discharged from the U. S. Army General Hospital in Newark on July 20, 1865.  He died in the West 43rd Street house at the age of 47 on Christmas Day, 1890.
The house became home to Jacob Loewer and his family.  He and his brother, George, were members with their father, Valentin Löwer, in the Valentin Loewer Brewing Co., which he founded in 1869.  As had been the case with Michael Schweyer, Loewer most likely chose 461 West 43rd Street because it was convenient to the brewery on West 41st Street.
The brewery was nearly lost on the night of October 18, 1893.  A massive blaze broke out in the wall paper factory of William S. Campbell on the same block.  The New York Herald wrote, "The fiercest fire this city has seen in many years swept away one-third of the block bounded by Tenth avenue, Forty-first and Forty-second streets last evening."
Next to Campbell's factory was a brick tenement he also owned.  In the basement was a saloon owned by Jacob Loewer's uncle, Jacob Johannes.  He lived in one of the apartments with his wife and seven children.  Behind the factory was a building occupied by William Schwager, the foreman in Loewer's brewery, his wife and nine children.
The New York Herald said, "From Nos. 530 to 540 West Forty-first street is the Valentin Loewer brewery, a handsome and costly structure of brick and granite, while on the opposite side are the brewery stables."  There were 60 horses housed in that building.  "Mr. Loewer arrived with a score of employés.  In a trice all the horses were taken out and were shortly scattered for the night in various stables in Eleventh Avenue."
The brewery, remarkably, escaped the conflagration.  Jacob Johannes and William Schwager were not so lucky.  In the basement of Johannes's saloon were barrels of whiskey, which exploded one-by-one, adding to the inferno that consumed the building.  The New York Herald reported that the structure in which the Schwagers lived was totally destroyed.  "Young Mr. Jacob Loewer took the Schwager family to his home, No. 461 West Forty-third street."
In 1896 Dr. William Angus White leased the house.  Born in Canada in 1873, he had graduated from the University of the City of New York Medical Department in 1896.  The bachelor doctor established his practice in the house. 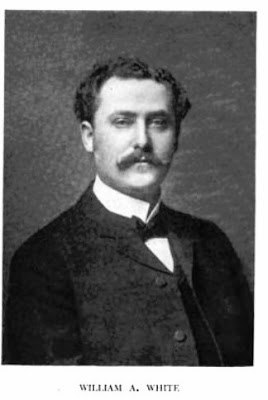 image from Universities and Their Sons, 1903 (copyright expired)
On December 27, 1900, White married Mary Mosetta Jones.  The couple soon welcomed a daughter, Mary Mildred.  (Mary would graduate from Barnard College  in 1924 and go on to teach English and biology.)  Although the Hell's Kitchen neighborhood was, for the most part, one of tenements and poverty by now, the Whites were financially comfortable.  In 1914 the doctor owned an Overland automobile.
White would live and practice from the residence for decades.  After having leased it for three decades, he purchased the house in May 1924.
His office was the scene of a tragic occurrence on December 21, the following year.  The New York Evening Post reported that while 65-year-old Peter McFarlin was sitting in the waiting room, he "collapsed and died from heart disease."
Dr. William A. White died of a cerebral hemorrhage at the age of 76 on July 10, 1933.  In 1935, 461 West 43rd Street became the home and office of Dr. Graham L. Bennett.  It was most likely Bennett who modernized the facade by stripping off most of the Victorian detailing. 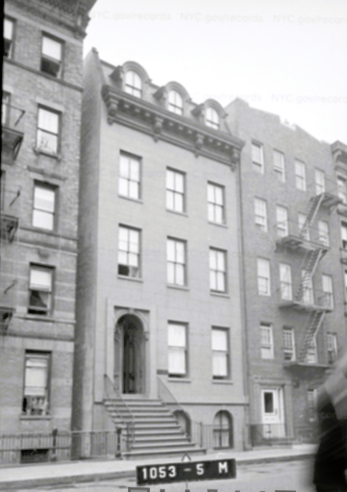 image via the NYC Dept of Records & Information Services
Dr. Bennett had received his medical degree from Cornell University and, like White, would live and practice from the house for years.  He was still listed at the address as late as 1953.
Astonishingly, the house remained a single-family home until a renovation completed in 1978 resulted in a duplex apartment in the basement and parlor floors (with a doctor's office in the lower portion), one apartment each on the second and third floors, and two on the fourth. 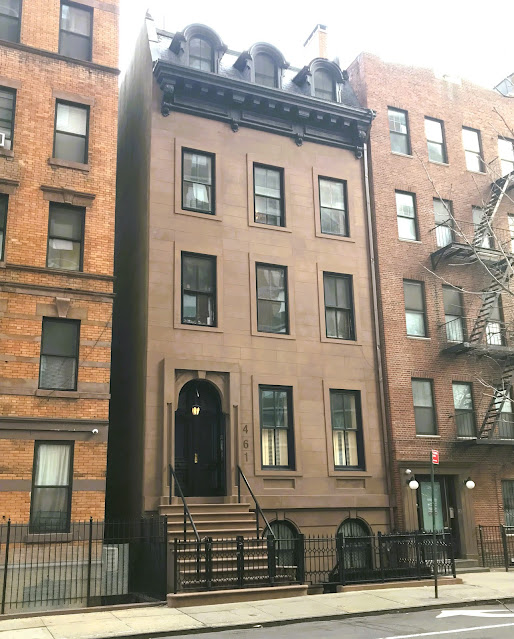