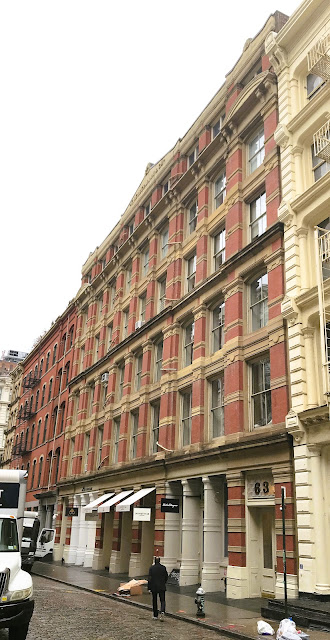 In 1858 German-born Emil Oelbermann co-founded the dry goods firm Noell & Oelbermann.  On December 1, 1874 Oelbermann and his new partner, Louis Ferdinand Dommerich, incorporated E. Oelbermann & Co. for "importing and selling dry goods and other merchandise."  The firm set up business at 62-64 Worth Street, but their success was such that in February 1875, architect Edward H. Kendall filed plans for a "six-story brick and stone drygoods warehouse."  Construction costs were projected at the equivalent of $2.87 million in 2023.

Sitting on the proposed site was the Greene-Street Methodist Church.  The congregation continued to worship from the venerable building as late as February 1876.  It was demolished that spring, and ground for the new building was broken on May 23, 1876.
As the structure rose, the Real Estate Record took note, saying on September 30, 1876 that a "notable example" of brick structures being built was "to be found in the mammoth warehouse now being constructed...for Oelbermann & Co. on Green street, near Broome."
Completed on January 31, 1877, the E. Oelbermann & Co. building was a handsome blend of the neo-Grec and Queen Anne styles.  While the dry goods district that we know today as SoHo was filling with cast iron buildings, Kendall clad this one in warm red brick trimmed in stone.  Even the ground floor storefronts--almost always pulled from the catalogues of cast iron foundries--followed the brick-and-stone motif of the upper floors.
Kendall used prominent stone cornices to create four distinct sections.  The terminal cornice was adorned with three Grecian style pressed metal parapets, each crowned with an anthemion.  The firm's name was announced within the center parapet. 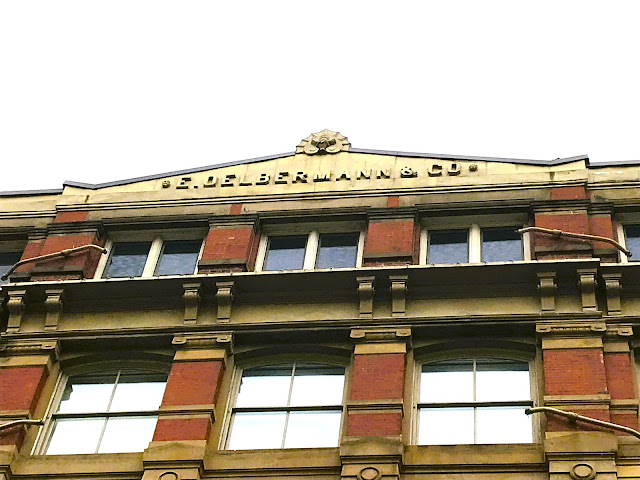 E. Oelbermann & Co. not only imported European dress goods, but acted as the New York City representatives of American manufacturers.  Among them in 1880 were silk maker Herman Simon of Union, New Jersey, and ribbon manufacturer Jacob New. 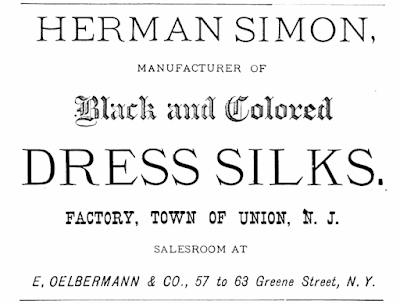 The Silk Goods of America, 1880 (copyright expired)
By 1890 Emil Oelbermann had returned to Germany.  King's Handbook of New York explained, "He resides in Cologne the greater part of the time, and attends to the interests of the house in Europe.  He makes trips to America occasionally remaining for two months at a time." 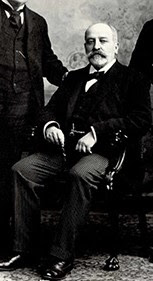 Emil Oelbermann (original source unknown)
Louis Dommerich, said the article, "is at the head of the establishment in America."  The firm was no longer an importer, but conducted its business "on a strict commission basis."  King's Handbook noted, "The firm represents manufacturers located in every part of Europe and the United States," adding "The sales amount to about $15,000,000 a year."  (That figure would translate to more than $460 million today.)
Emil Oelbermann died in 1897.  The firm retained the old name until around 1902, when it became Oelbermann, Dommerich & Co.  Among the companies it represented was R. & H. Simon, the large silk mills of which were located in Easton, Pennsylvania.  The two companies would be associated at least through 1911. 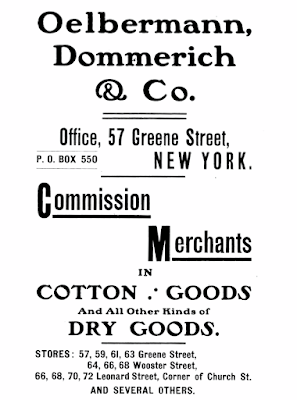 from Proceedings of the Fifth and Sixth Annual Conventions of the Southern Cotton Spinners Association, 1902 (copyright expired)
Two years later the name was changed again, now L. F. Dommerich & Co.  In 1913, after having occupied its Greene Street building for 36 years, L. F. Dommerich & Co. relocated to Fourth Avenue.  In its May 1913 issue, The American Printer announced, "The Ault & Wiborg Company, New York, has removed to 57-63 Greene Street, one door north of Broome Street, where larger quarters with improved facilities have been secured."
The new occupant reflected the changing tenor of the neighborhood as drygoods and textile firms moved northward.  The Ault & Wiborg Company was founded in Cincinnati in 1878 by Levi Addison Ault and Frank Brestow Wiborg and by now, in addition to the New York location, had branches in London, St. Louis and Chicago.
The firm manufactured printing inks, varnishes, lacquers and lithographer supplies.  When it moved into 57-63 Greene Street, it was the world's largest ink manufacturer.  The firm's high-quality colored inks were marketed in an expensive and successful decades-running ad campaign.  The company commissioned well-known artists to design colorful posters that would advertise and demonstrate its inks.  Among the artists to produce works for Ault & Wiborg were Henri Toulouse-Lautrec, Louis Rhead, and Will H. Bradley. 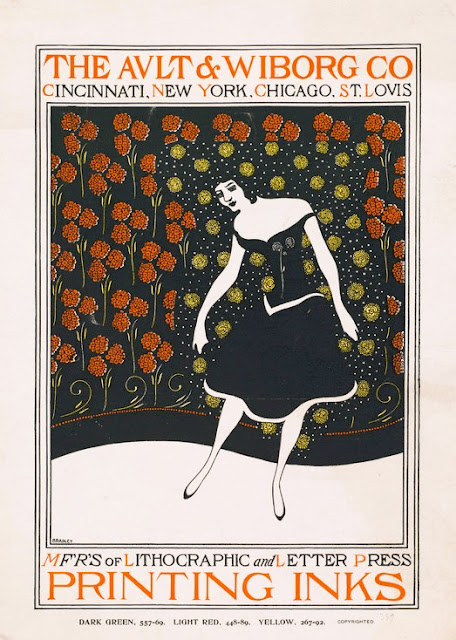 This advertising poster, designed by Will H. Bradley, noted the ink colors and numbers at the bottom.
Ault & Wiborg Company remained in the building until 1924 when the newly-formed General Display Case Co., Inc. moved in.  The manufacturer of "metal, glass and wood" cases would remain here for more than half a century, still doing business at the address as late as 1973.
The 1980's saw the SoHo neighborhood changing once again.  The lofts that had housed manufacturers for more than a century were increasingly becoming home to artists and galleries.  In 1986 WYS Partnership Architects & Designers moved into 57-63 Green Street, and in 1987 Language Enterprise Training operated from the building.  It offered "private programs in 32 foreign languages that will enable you to communicate and interact with confidence here and abroad."  A 50-hour program cost students $950 that year, or about $2,270 in 2023 dollars.
Language Enterprise Training remained in the building until the upper floors were converted to living and working quarters for artists in 1990.  One of the stores became home to Craft Caravan Inc., which sold decorative household items, that year.
Artist Barbara Nessim's worked and lived here in the late 1990's.  She was a pioneer in the use of computer aided design.  She was quoted in the 1990 The Desktop Designer's Illustration Handbook saying, "I think the computer is such a fascinating tool to incorporate into the thinking processes and the art that I am doing now."
Glass artist Euzan Etkin worked from the building in 2010 when Transmaterial 3 highlighted her hand-blown glass infused with 24-karat gold and her blown "silvered glass."
The penthouse apartment was purchased by British singer Zayn Malik, former member of One Direction, in 2018 for just under $11 million.  The 26-year-old sold it two years later for a disappointing $9.45 million. 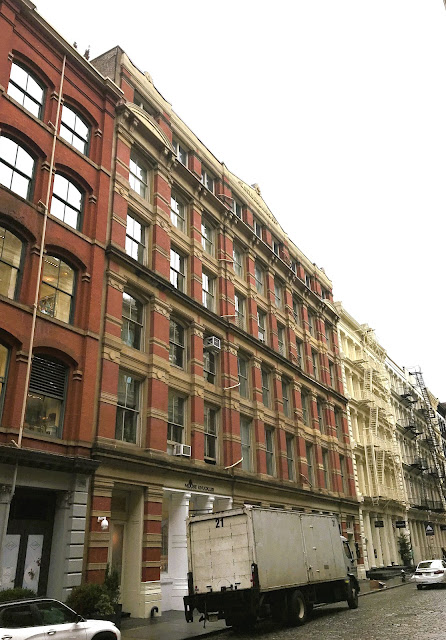 Edward H. Kendall's striking building is wonderfully intact--even the ground floor, normally the first to be brutalized.  Because of its location on the relatively narrow street, it is greatly under-appreciated.
photographs by the author
many thanks to reader Peter Alsen for suggesting this post
no permission to reuse the content of this blog has been granted to LaptrinhX.com
Posted by Tom Miller at 1:00 AM