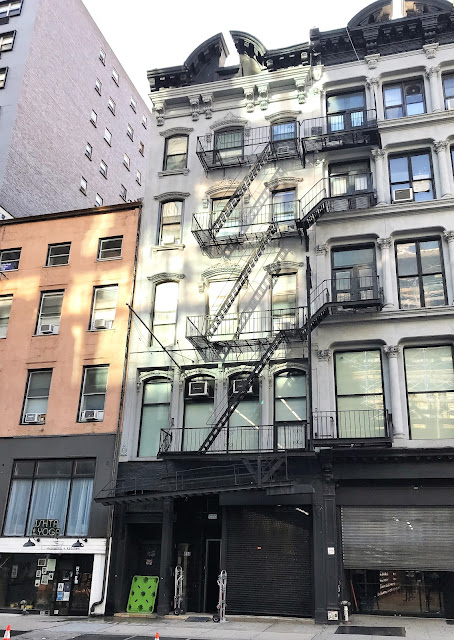 Only a decade after James Renwick Jr.'s magnificent Grace Church was completed, the era of brick and stone mansions in its Broadway neighborhood was over.  In 1854, construction was begun on a five-story meeting hall just north of the church, at 814 Broadway.  The architect embellished the marble facade with cast iron elements-- a surprising mixture of materials.  The blend of the Second Empire and Italianate styles was on the cutting edge of commercial architecture.  The tall windows of the second floor were recessed behind alternating free-standing Corinthian columns and pilasters.  The lintels over the center windows of the upper floor were decorated with stylized anthemia, and above the bracketed cornice, a robust broken-arched pediment rose. 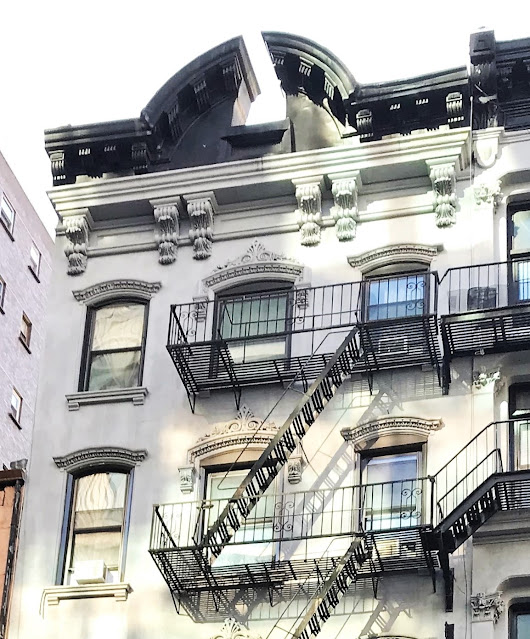 The ground floor was leased to James H. Perkins for his New York Billiard Rooms.  On opening day, June 19, 1856, the New York Herald said it was "all the talk up town," adding, "A perfect crowd of gentlemen will be present this evening, at the opening of four of the best bowling alleys ever laid in this city."  The following year, in April, an advertisement in the New York Herald read:

Billiards--This beautiful game taught without a book, by Professor Connor, at the New York billiard and bowling rooms, 814 Broadway.  Ten lessons for $5.  A fine club room to let, furnished with billiard table.

Perkins's mention of another club room being available reflected his management of the entire building.  A separate advertisement on the same day offered, "To Let--A large room, suitable for a drill or lodge room; also two rooms for club rooms, furnished or unfurnished.  Apply at 814 Broadway, at the New York billiard and bowling rooms.  J. H. Perkins, Manager."
The upper floors were leased to organizations like the New York Chess Club.  On November 10, 1858, The Family Herald reported that its members were preparing for a visit by chess master Paul Morphy.  At their meeting the previous night, it was decided "that, as the genius of Paul Morphy had done so much to advance the study of chess in this country, it was but meet and proper that some public manifestation of the admiration felt for his talents by the chess players of America should be made on his arrival in this city."
Other meeting rooms were leased to fraternal and political organizations.  One was the New York Grand Lodge of Perfection, and another was the secret society of the Sons of Malta.  Frank Leslie's Illustrated Newspaper reported on the latter's "Festival of the Seven Cardinals" in 1860, saying that 500 Sons "clad in armor, with vari-colored robes and plumage" processed from their lodge rooms here to Union Square, "before retiring to the Malta Saloon for a private dinner."
The rumbles of Civil War were a grave issue for the Republican Central Club and its counterpart, the Democratic Mozart Hall, both of which were located in 814 Broadway in 1861.  During the Republican Central Club's meeting on January 3, 1861, a series of resolutions was adopted, including the "expressing a strong hope that the Republicans in Congress would yield nothing whatever to the impious demands of the Slave power."  And two weeks later it resolved that the members "view the criminal agitation of the dissolution of the Union...as a renewal of the detestable principles advocated by the Tories in the Rev0lution."
Simultaneously, the Mozart Hall members were hoping the Government would not push the South into war.  On April 6--less than a week before the first shot on Fort Sumter--The New York Times said the group opposed "every form of menace, restraint, or coercion, under any pretext of enforcing law, collecting revenue, or retaking property, which might lead to a conflict with the seceded States."
War was, of course, inevitable by now, and 814 Broadway soon became a center of recruitment and mustering volunteer groups.  On June 15, 1861 the New York Herald reported that former Congressman John Cochran had been commissioned a colonel and "it is his intention...to organize, equip and forward to the seat of war as many regiments as can be recruited by him.  Col. Cochrane's headquarters are located at No. 814 Broadway; and in two days, such is the patriotic ardor of the people, enough men have volunteered...to form two or three new regiments."
A second recruitment office, run by Colonel Gurney, operated from Mozart Hall by the summer of 1862.  Businessmen donated money to boost enlistments, placing an ad in the New York Herald that read:

Colonel Gurney's National Volunteers--Extra Bounty--The Produce Exchange Committee will pay an extra bounty of $10 to the first 300 men enlisting with this regiment.  The bounty will be paid at headquarters, No. 814 Broadway, Mozart Hall.

The incentive was the equivalent of $265 per man in today's money.
The Women's Central Association of Relief opened its New York headquarters here.  The group received donations of food and supplies to be sent to the front.  On December 22, 1861, The New York Times reported on the challenging work.  That week an urgent telegram had arrived from the South that read, "Send 2,500 each, sheets, shirts, drawers, socks, towels; and 1,260 each, blankets or quilts, bed and pillow ticks, handkerchiefs and flannels, with wine, starch and cocoa, by Government steam."  The women filled most of the order, but pleaded, "In consequence of this large demand, our stores are very much exhausted, [and] indeed we must again appeal to the benevolent for further supplies."
Recruitment for a new group of soldiers began early in 1863.  The New York Times reported that men were already being drilled at 814 Broadway, even before Congress had passed the bill to create the group.  "The corps is called the First Regiment Ambulance and Sanitary Troops, and the office is at No. 814 Broadway."
The Fenian Brotherhood leased meeting rooms in 1865, calling the space Fenian Hall.  While the purpose of the group was to fight for Irish independence, its focus was much closer to home that year.  A schism among the working class members and the officers had reached a boiling point.   In an article titled "The Fenian Explosion" on December 12, 1865, The New York Times reported that the "malcontents" "allege that of those lavish contributions which the frugal and industrious Irish servant-girls in the United States have contributed with the expectation of liberating their native isle, no insignificant share has been squandered if not embezzled by the salaried officials who utter their edicts from the headquarters of the Fenian President in New-York."
With the war over, activities within the building returned to lodge meetings and lectures.  In 1866, the top floor room was operated as a lecture room by Richard D. Goodwin, who described himself, according to the New York Dispatch, as "a lecturer on several subjects of interest," a reformer, a politician and a spiritualist.  Audiences came to see appearances of Ella Vanwie, a medium.  An advertisement on June 8, 1866 said in part, "She is tied and untied by spirits; no lock or bolt can hold her; musical instruments of various kinds are played upon; hands, faces, feet, legs and arms are frequently shown to the audience; also feathers, flowers, ribbons, laces, jewelry, &c., are shown, and often presented to the mystified assembly."
The New York Dispatch was unflattering in its description of Ella Vanwie, saying "She appeared to be about seventeen years of age, was without bust, and was born, she said, in Michigan; was as thin as a rail, and fever and ague seemed to have shaken her out of shape."  At the time of the description, both Ella and Goodwin were appearing in court.  Female undercover investigators had raided Ella's dressing room after a performance.  On her they found not only keys to the locks that had bound her, but the ribbons and baubles that had mysteriously appeared.  More importantly, they found rings and jewelry that had been stolen from audience members.  In court Ella testified "that God or the spirits put things in her pockets after she had been searched."
The New York Dispatch reported, "Taken altogether, this was one of the most extraordinary expositions of humbuggery that has ever engaged the attention of the Court of Special Sessions.  Following the case Goodwin was arrested for perjury.
In 1866 the space ground floor became home to the decorating firm of Thomas Faye.  It decorated the walls and ceilings of homes and businesses with frescoes, paneling, fabrics and wallpaper. 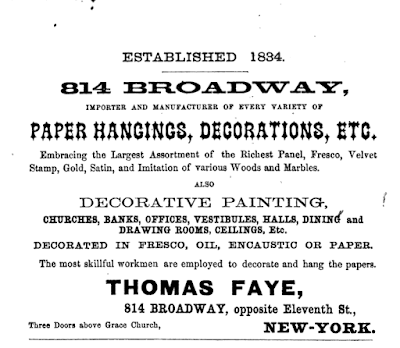 Sadler's Catholic Almanac, 1866 (copyright expired)
Mozart Hall remained in the building at least through 1867, and the Republican group, now named the Liberal Republicans, were still here in 1873.  But gradually, 814 Broadway was becoming home to commercial tenants.
Perhaps the first was the drygoods firm of Reiman & Co., which moved into the building in December 1874.  An advertisement listed items like "dress goods, black and colored silks, laces and embroiders, hosiery, white goods cloths, cassimeres &c."
In 1876 music dealer and publisher Thomas J. Hall was listed here, joined by Beer Brothers, purveyors of "fine gold and bronze picture frames" in the 1880's.  Importantly, the store and basement were leased to Thonet Brothers of Vienna, Austria in September 1880.  The makers of bentwood furniture signed a lease at $4,500 per year--a significant $9,800 per month in today's money. 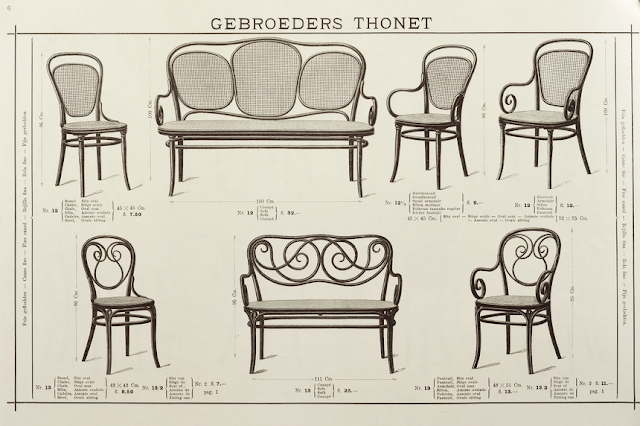 Customers at the Thonet shop browsed creative bentwood furniture like this.
On April 26, 1884 The Record & Guide commented:

The bent-wood furniture, which is very light and indestructible, is gaining rapidly in favor and popularity; one great merit it possesses is comfort, as the backs of the chairs are made to fit the body, a variety of graceful designs are shown at No. 814 Broadway.

Leasing space in the building by 1887 was another furniture maker, Sargent Manufacturing Company.  The firm made items for the elderly and disabled, as reflected in a blurb in The New York Times on December 11 that year.  "If you wish to remember your invalid friends with a sensible Christmas gift, examine the Sargent Manufacturing Company's stock, 814 Broadway, where are to be found all of the most approved styles of reclining, rolling, and carrying chairs, back rests, bed trays, commodes, and all sorts of book stands, and convenient reading appliances." 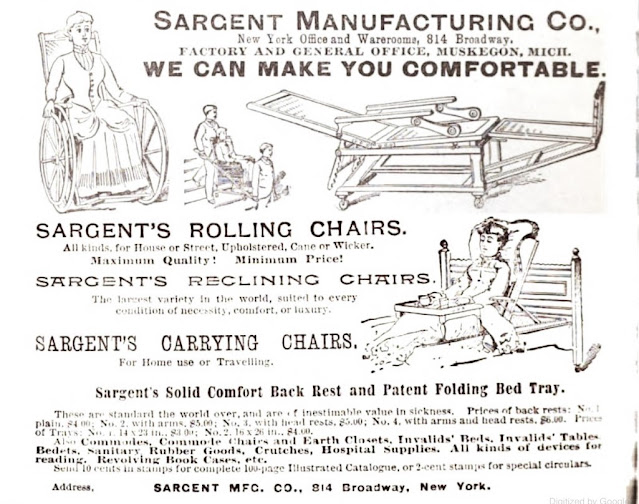 The Arena, 1890 (copyright expired)
Sargent would remain in the building at least through 1895.  By then apparel firms like Riess & Marcus, neckwear makers, and Joseph Yesky, were leasing space.  Joseph Yesky manufactured sportswear, like its "men's bicycle and golf suits," and "linen crash suits."  It made commercial uniforms as well, advertising "coats, jackets and aprons for waiters, cooks, bartenders and barbers," in 1895.
Amasa Lyon was first listed at 814 Broadway in 1899.  The firm manufactured umbrellas and canes, including parasols, gold and silver handled umbrellas, and children's carriage parasols.
Around this time, the store became home to C. G. Willoughby's camera and photographic supply stores.  It would remain in the space until the summer of 1916, when it moved just two doors to the south, at 810 Broadway.
The building continued to house apparel firms over the next decades, including the Manhattan Neckwear Co. following World War I, and the Boys' Clothing Company in 1921. 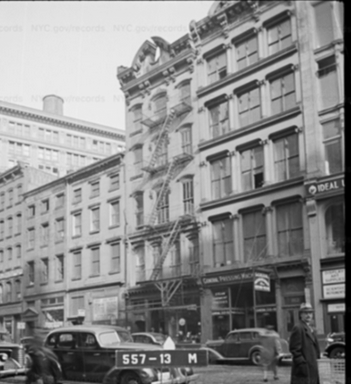 Two former homes, converted for business, survived to the north (left) of the building in 1941.  from the NYC Dept of Records & Information Services
The 1970's saw the U-P Screen at 814 Broadway.  The venue showed vintage films, like a marathon of Charlie Chaplin films in October 1975, and a series of animated silent films in 1978.  On February 24 that year, The New York Times said, "The antics of Gertie the Dinosaur, the Katzenjammer Kids and Happy Holligan can be seen tonight and tomorrow." 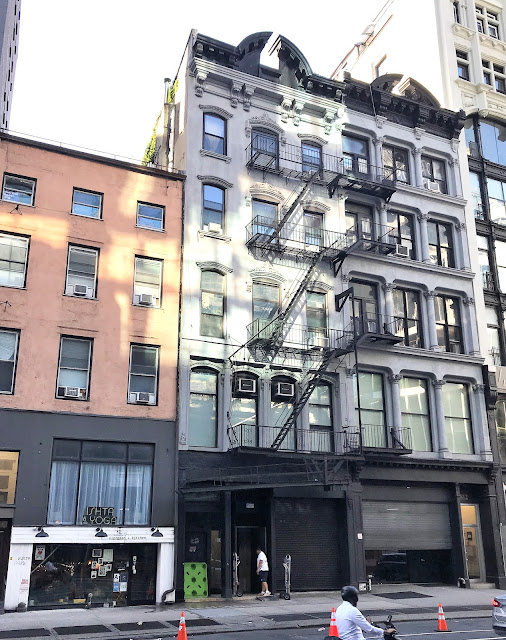 The store space was home to the Bodega Wine Bar starting around 2013.  In 2015 the upper floors, where Union soldiers had enlisted to fight the rebels in 1861, were converted to residential use, one apartment per floor.
photographs by the author
no permission to reuse the content of this blog has been granted to LaptrinhX.com
Posted by Tom Miller at 1:00 AM