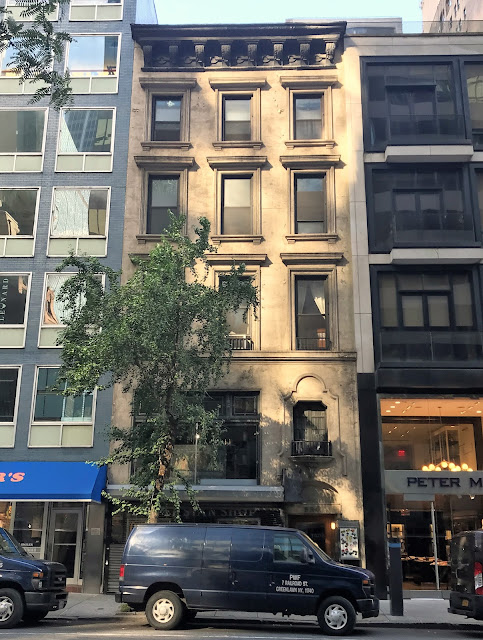 Builder John Sares erected a row of four high-stooped houses in 1870, on the northwestern corner of Madison Avenue and 54th Street.  Typical of the brownstones going up in the neighborhood, they were handsome yet understated when compared to the palaces that would appear within the decade--like the Vanderbilt houses a block away on Fifth Avenue.

Construction of each of the residences cost Sares $10,000, about $205,000 in today's money.  It is generally agreed that architect Mortimer C. Merritt designed the Italianate style structures.  Four stories tall, their arched entrances and parlor floor windows were enhanced by classical pediments.  Molded lintels topped the architrave surrounds of the upper openings, and individual bracketed cornices crowned the design. 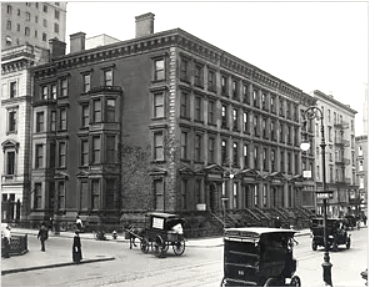 534 Madison Avenue sits next to the corner house.  photo via Culver Pictures
The family of Henry Stokes moved into 534 Madison Avenue.  Stokes was president of the Manhattan Life Insurance Company and vice-president of the Manhattan Savings Institution.  He and his wife Mary had a son, John S. Stokes, who was in the real estate business.
Even the wealthiest of families had to deal with vermin, and in 1878 Mary attacked the problem head-on with disastrous results.  On May 21 The New-York Times reported, "for some time past Mrs. Mary Stokes, the wife of Mr. Henry Stokes...has been troubled by cockroaches and Croton bugs [i.e. the Oriental cockroach, or "water bug"], which swarmed behind the wainscoting in a pantry in the rear of the first floor of the house."  A friend had told Mary that kerosene oil would destroy the insects.  She purchased a can of the fluid, and poured it into the crevices where the roaches had been seen coming and going.  Most likely the friend meant that the kerosene oil would poison the insects--if so, Mary misunderstood.
She lit the kerosene.  "A blaze followed, and the flames ran along the wood-work until it reached the can of oil.  An explosion followed, and the burning fluid was scattered over the person of Mrs. Stokes, burning her on the arms, wrists, neck, and face."  Mary's screams alerted a maid, Mary Keith, who rushed to her aid.  In attempting to extinguish her employer's burning clothing, she herself was burned on the arms and hands.
Firemen arrived to put out the blaze.  The New York Times reported that the damages "to the furniture and building will not exceed $100" and that the women's injuries, "though painful, are not of a serious nature."
Henry Stokes died in the house at the age of 81 on February 11, 1887.  His funeral was held in the drawing room three days later.
In 1891 Mary transferred title to her son.  The following year, in November, Frank R. Lawrence and his wife, the former Eva Annette Reed, purchased the house.
The Lawrences had married in 1876 and had four children, Eva Reed, Frank Jr., Herbert Reed, and Connor.  Their country home was at Milton Point, in Rye, New York.  A partner with his brother Malcolm R. Lawrence in a corporation law firm, Frank was also a director in the Chatham National Bank and City Trust Co.  Having been admitted to the bar in 1869, The Sun later said, "His rise was rapid, so rapid that within a few years he was the legal representative of banks, railroads, and other great corporations, and was conducting the legal affairs of his prominent clients with marked success."
His wide interests were reflected in his club memberships--he was president of the Lotos Club, and a member in the Manhattan, American Yacht, Lawyers', Arkwright, and Salmagundi Clubs, and the Dunlap Society.
Nine years after moving into the Madison Avenue house, Eva Reed Lawrence died at Milton Point on August 11, 1901.  Her husband's social prominence was reflected in his sitting on the "Committee for the Reception of Prince Henry in New York," appointed by Mayor Seth Low on January 22, 1902.  The younger brother of Emperor William II of Germany and a grandson of Queen Victoria, Prince Henry of Prussia's visit to the United States launched major receptions in Washington, Boston, New York, Philadelphia and West Point.
Eva Lawrence's death put Frank in the uncomfortable position of hosting his daughter's debut into society--unquestionably the bailiwick of society mothers.  He seems to have pulled it off successfully.  On December 1904, The New York Press reported, "Miss Eva Lawrence was introduced by her father, Frank R. Lawrence, yesterday at a reception in No. 534 Madison avenue."  He did not have to manage alone, however.  The article noted that Eva was assisted by nine young unmarried women.
Five months later, on May 27, Eva married David H. Taylor in St. Bartholomew's Church.   The New York Times wrote, "The ceremony will be an imposing one," adding, "A reception will follow the ceremony at the residence of the bride's father, 534 Madison Avenue."
By the time of Eva's wedding, the neighborhood was becoming increasingly commercial.  When the Lawrence family moved into their home, the traffic on Madison Avenue was limited to  the elegant carriages of the homeowners.  Now it teemed with vehicles.  To help alleviate the problem, in 1910 the city ordered the elimination of all "encumbrances" in order to widen the thoroughfare, including the removal of stoops.  The upheaval prompted many well-to-do families to move further north, but the Lawrence family remained in its now stoop-less home.
In 1918 Lawrence was afflicted with what The Sun called a "heart lesion."  Nevertheless, he went about his duties, particularly with the Lotos Club, where he had been president for three decades.  On October 22, he presided over a dinner during which he read aloud "President Wilson's last note to Germany and leading in the cheers which greeted the words 'complete surrender,'" as reported in The Sun.
Four days later, on the morning of October 26, he arose feeling particularly well.  "In fact," said The Sun, "he remarked to his secretary just before leaving his home at 534 Madison avenue to go to the St. Regis barber shop that he felt better than he had in a long time."  But, while seated in the barber chair, he suffered a fatal heart attack at the age of 73.  In reporting his death, The Sun called him "eminent among corporation lawyers of the country."
The Lawrence heirs briefly leased the basement level to the Spanish Antique Shop, run by the Montllor Brothers.  Then, on November 30, 1919, the firm announced "our building has been sold and we must vacate by January, 1920." 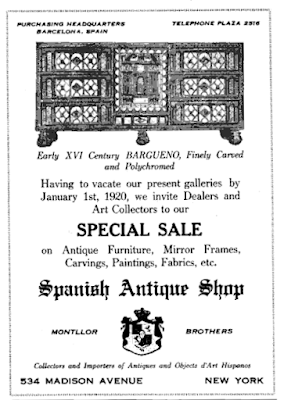 Arts & Decoration, December 1919 (copyright expired)
The Sun explained, "The four story residence at 534 Madison avenue, for twenty-nine years the home of the late Frank H.  [sic] Lawrence, president of the Lotos Club, has been purchased by Anthony Kimbel, interior decorator."  A. Kimbel & Son was one of several high-end interior decorating firms, like Schmitt Brothers, moving into the neighborhood.  It catered to wealthy clients and sold 18th century British and European furniture, antique tapestries and such. 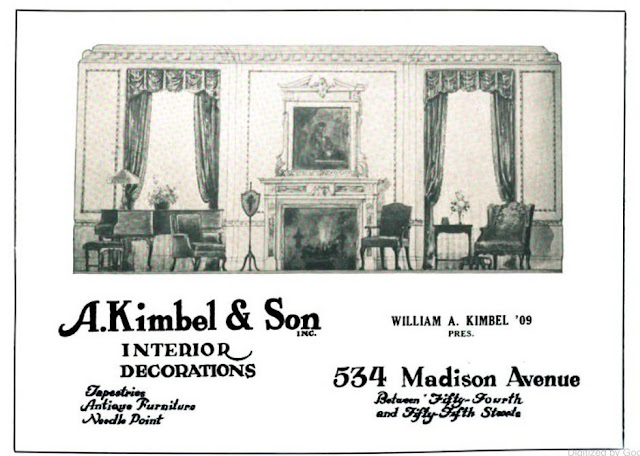 The Columbia Alumni News, July 1922 (copyright expired)
A. Kimbel & Son would not remain in the building especially long.  The firm left in 1925, to be replaced by A. Wertheim, Inc., art dealers.  Before moving in, however, A. Wertheim, Inc. renovated the lower two floors of the facade by installing a double-height show window and a Spanish Renaissance style window with faux balcony above the entrance. 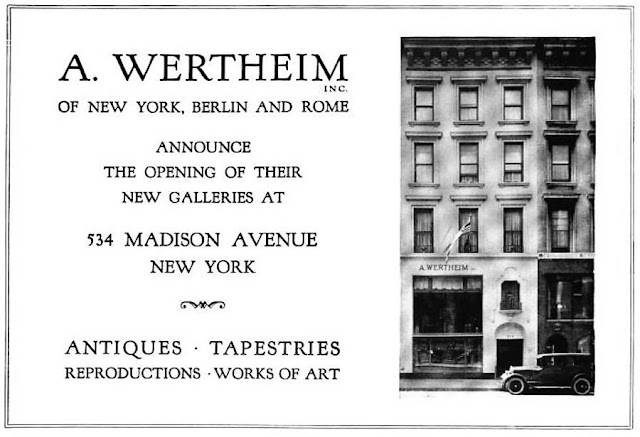 The gallery's opening advertisement featured a photo of the newly-renovated building.  International Studio, July 1925.
In its July 1925 issue, the International Studio wrote, "A. Wertheim has recently opened a branch studio at 534 Madison Avenue, which is a distinct acquisition to the art interests of New York.  In it one finds a carefully selected assortment of rare and fascinating objects of art, both ancient and modern."
But, like A. Kimbel & Son, A. Wertheim would remain only five years.  In 1930 Freeman of London, dealers in "antique English silver and old Sheffield plate," leased the store.  On September 26 The New York Sun reported, "This firm has specialized in the collection and sale of English silverware for the past fifty-five years."  Freeman of London's presence was even shorter.  The shop moved out following the end of a single-year lease.
A long-term occupant would finally arrive in 1940 with the opening of The Persian Shop, run by the Terzis family, who purchased the building and moved into the upper floors.  The new owners updated the facade with a black glass, arcade storefront. 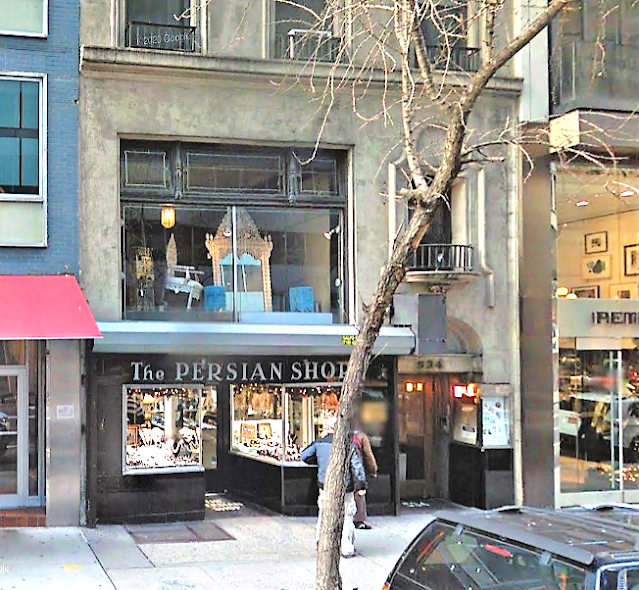 The Persian Shop originally sold exotic, imported jewelry from the Middle East.  On August 22, 2008 The New York Times columnist Christopher Gray commented, "In the 1960s, the shop window was filled with intriguing artifacts like jewelry with secret compartments, intricate metal work and mysteriously named 'poison rings.'"  Now, he said, Andrew Terzis sold mostly modern jewelry.  "I have to focus on what sells," he told Gray. 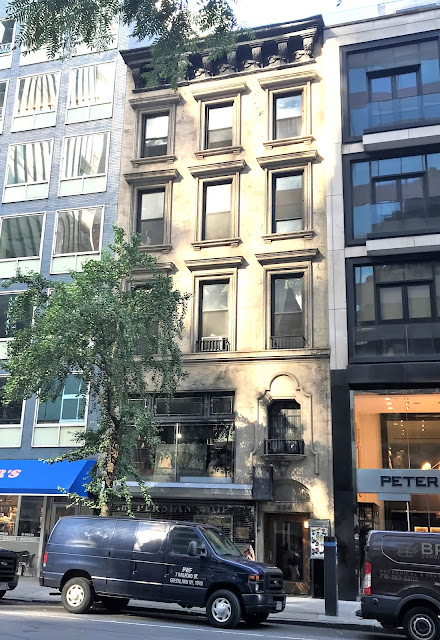 More than eight decades after moving in, The Persian Shop is still in the building.  And above the 20th century storefront, Henry Stokes's 1870 house is remarkably unchanged.
photographs by the author
no permission to reuse the content of this blog has been granted to LaptrinhX.com
Posted by Tom Miller at 1:00 AM