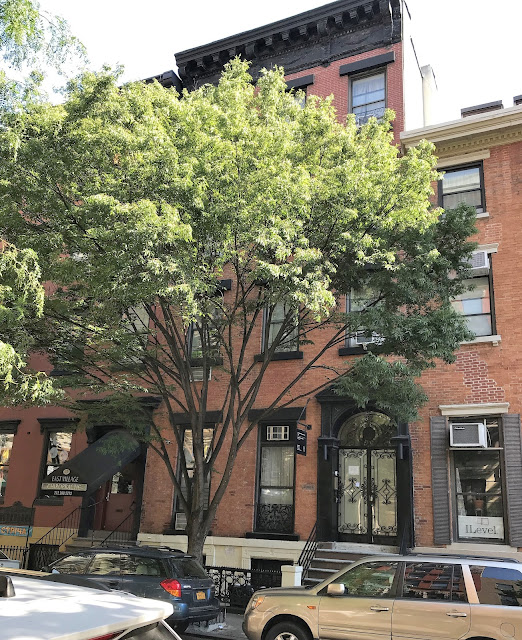 By the 1830's attorney and banker Thomas E. Davis had become, perhaps, more interested in real estate development than his primary professions.  He would become a major player in the East Side east of the exclusive Bond Street neighborhood as it transformed from farmland to residences.  Beginning around 1831, he erected rows of speculative brick homes in the area.

Partnering with Louis Wilcox in 1832, he began construction of one such row on East 7th Street between Second and Third Avenues.  The handsome Federal style residences were completed the following year, valued at $6,000 each—about $191,000 today.
Among them was 35 Seventh Street (the "East" would come later).  Identical to its neighbors, the 25-foot-wide residence was clad in warm orange brick laid in Flemish bond and rose three stories high above an English basement.  Diminutive carved brackets supported the stone window sills and a prim denticulated cornice capped the facade.  The intricate doorway was an upscale element, reflecting that the home was intended for a financially-comfortable family.  Here the round arched door surround with its faceted keystone featured delicate carving and suggested upscale interiors behind its double doors. 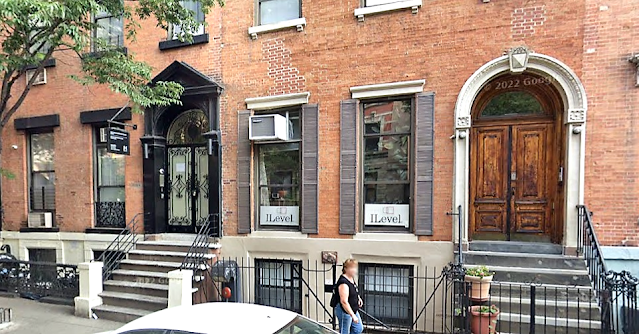 The entrance originally matched that of 37 East 7th Street (right).
By the mid-1840's the house was home to William G. Edwards, a fur merchant, and his family.  As was common, they took in a boarder.  William C. Booth an unmarried woolens merchant on Cedar Street, moved in with the family in 1845 and would remain throughout their residency.
A servant made an unsettling discovery that fall.  On September 24, 1845, The Evening Post reported:

Several days ago a male infant was left at the door of the house No. 35 Seventh street.  It was taken into the house, and every effort made to save its life, but it died yesterday.  If the unnatural mother had a heart, this news would wring it to the core.

In 1850 the Edwards family moved down the block to 43 Seventh Street.  Their relationship with their boarder was obviously quite close, and he moved with them.
No. 35 Seventh Street became home to attorney and writer Richard Burleigh Kimball and his wife, the former Julia Caroline Tomlinson.  The couple had married in 1844 and would have five children.
Born in Plainfield, New Hampshire on October 11, 1816, he had graduated from Dartmouth at the age of 17 in 1834 before studying law in New York and Paris.  Kimball traced his American ancestry to Richard Kimball, who landed at Boston in 1634.
Three years after moving into the Seventh Street house, Kimball left his law practice and ventured into the development of Texas and into writing.  An advertisement for the Texas Land and General Agency said, "The Proprietor of the above Establishment instituted at the City of Houston in March 1843, can be found to day at Richard B. Kimball's, Esq.; No. 35 Seventh-street."  He founded the town of Kimball, Texas and built a portion of the first Texas railroad.
Through his extensive travels he became acquainted with important American and European figures.  According to Appletons Encyclopedia, "He knew Dickens intimately and had met Lamartine, Thackeray, Lord Palmerston, and the elder Peel, and among prominent Americans knew Washington Irving, Webster, and Clay." 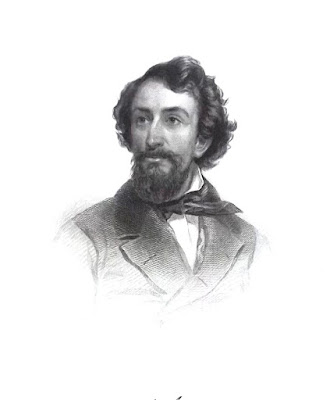 Richard Burleigh Kimball in 1854. original source unknown
Among his many works were the 1850 Cuba and the Cubans; Romance of a Student Abroad, published in 1852; and the 1870 To-Day in New York.
It was most likely one of his many trips that prompted Kimball to first lease his home in 1855.  An advertisement in the New York Herald read:

To Let--The three story furnished house, 35 Seventh street.  It is completely and handsomely furnished, and fitted with gas and water, and all the modern improvements.

The well-respected Kimball suffered a blow to his reputation in the summer of 1885.  On July 24 The New York Times reported, "Richard B. Kimball, a lawyer, was arrested yesterday on an order of arrest...at the instance of Mary A. and Louise Crotty."  The sisters accused him of  appropriating "about $2,689 of the property" of their deceased father's estate for his own use.
In the meantime, around 1861 two widows, Mary A. Rogers and Ann E. Cox, were living in the East 7th Street house--most likely renting it from Kimball.  It is quite possible that the two were sisters.  They remained until 1878 when it was purchased by William Wicke.
It may have been Wicke who replaced the areaway ironwork with extremely eye-catching Aesthetic style fencing.  He sold the house in January 1885 to real estate operator George Roll for $14,500 (about $403,000 in today's money).  By then the neighborhood had changed from one of monied professionals to immigrants, many from Germany.  The once-proud house was now home to several families. 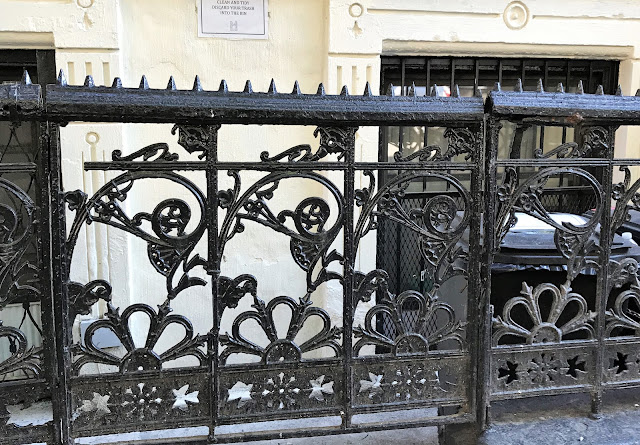 The Aesthetic period ironwork replaced the original Federal fencing.
When Gustave Solomon purchased the house from  George Roll's estate in 1896, it was described as a "three-story brick tenement."  Interestingly, the property values had not fallen since Roll purchased it.  Solomon paid $15,000 for the house, or $477,000 in today's terms.  Solomon immediately made renovations, hiring architect William C. Sommerfield to remove and reconfigure walls on the second and third floors.
Among the tenants was Dr. Alexander W. Beck.  He was called to the room of Pauline Barnett (described by The New York Press as "a most consummate actress") at 11:00 on the night of November 9, 1896.  The newspaper also mentioned that she "did not bear a reputation beyond reproach," however.  In fact, it appears that Pauline engaged in prostitution with the full knowledge of her husband.
Pauline had been "choked and robbed" the night before, according to the article.  There had been two similar assaults on women recently, causing the newspaper to opine this "might suggest the existence of some maniacal strangler."
Pauline's husband had not called police.  "It is explained that he thought his wife might recover, and exposure would make their mode of living the harder for them," said the article.  By the time Dr. Beck was summond, he "found the woman violated and unable to recognize any one."  The New York Press said, "He administered morphine, but feared that insanity, if not death, might result."
Although two men were arrested, Pauline denied that either was her assailant.  The New York Press reported, "Some of the police go so far as to say that the woman may be shamming to avoid being dispossessed."  (Prostitution was a sure grounds for eviction in most rooming houses.)
Dr. Beck responded to another disturbing case, this one just across the street, in 1898. On December 11 The Sunday Telegraph reported on "a strange death certificate handed in by Dr. Alexander W. Beck, of 35 Seventh street" to the City Coroner.  "The certificate stated that David Goldberg, aged 2 years and 1 month, of 32 Seventh street, had died Friday afternoon of asphyxia, the burning of one-quarter of his body, and opium poisoning."
The baby had been "horribly scalded by hot coffee" on December 8.  His parents' home treatment was peculiar by today's viewpoint.   They "applied oil and limewater to the burned parts and then poured ink over them."  When that did not work, they called for Dr. Beck, who prescribed a powder containing bismuth, boric acid and opium.  It was to be used sparingly, but the Goldbergs "put the powder on the child very freely," according to the article, "and in two hours the boy was unconscious."  Dr. Beck blamed the parents for not following his instructions, while the Goldbergs maintained that he gave them no directions.
Mrs. Jennie Dorf purchased 35 East 7th Street in 1906.  There were four families living in the house three years later when she hired the architectural firm of Harrison & Sackheim to make significant alterations.  The height was raised to four floors, and the entrance given with a Renaissance inspired triangular pediment.  The alterations cost Dorf the equivalent of more than $175,000 today. 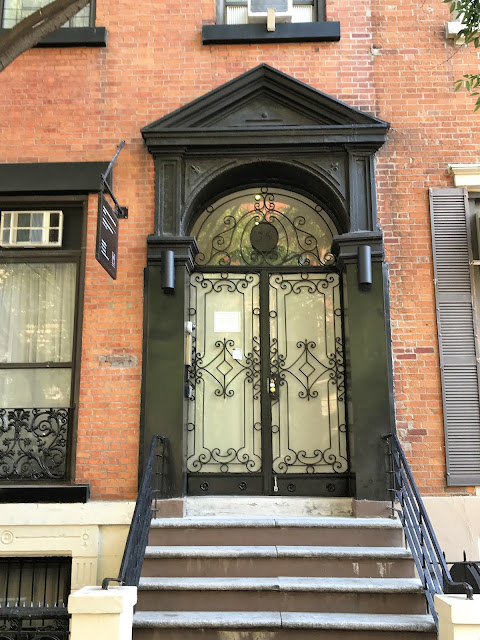 The proportions of the arched 1832 dooway survive within the substantially altered entrance.  The stone pedestals at the foot of the stoop very likely once held wrought iron basket newels.
A renovation completed in 1955 resulted in a doctor's office on the parlor floor and one apartment each on the others.  The Lower East Side neighborhood was dealing with a raft of problems like poverty and substance abuse at the time.  Living at 35 East 7th Street in 1964 was 19-year old Shirley Neff.  On June 19 that year, undercover police posed as out-of-town college students and visited the East 80th Street apartment of Margaret Hagopian.  They arrested Hagopian for "living off the proceeds of prostitution" and jailed three "alleged call girls," including Shirley Neff. 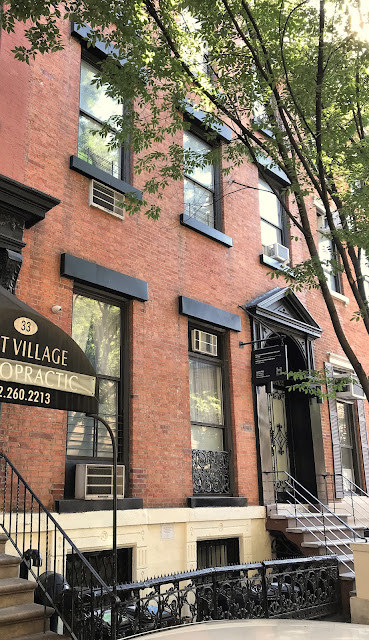 The venerable house was remodeled once again in 2006.  There are now five apartments in the building, one per floor.  The Edwards house, with its riveting history, stands out among the row with its somewhat quirky 1909 entranceway.
many thanks to reader Joe Ciolino for prompting this post.
photographs by the author
LaptrinhX.com has no authorization to reuse the content of this blog
Posted by Tom Miller at 1:00 AM