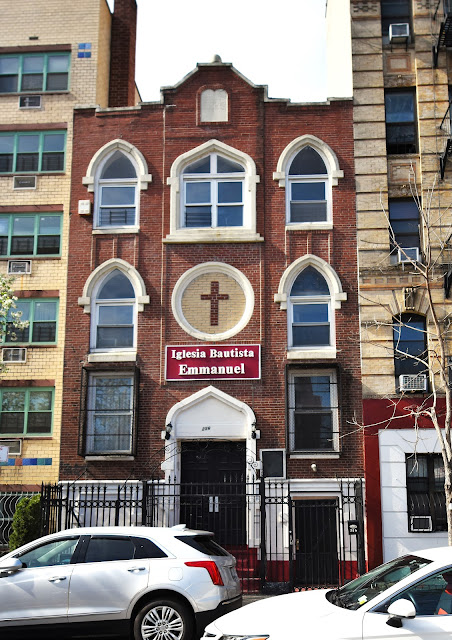 On April 4, 1859, August and Elizabeth Janson transferred the 24-foot-wide lot which would become 256 East 4th Street to Freiderick Bender.  The deed noted that the property "is part of the estate of Petrus Stuyvesant, deceased."  Sixty years later, in 1919, the Bender family sold the property, which now held "a four story front and rear building."  Both the structures were described as "tenements."
The neighborhood had greatly changed in those six decades.  It was now crowded with immigrant families from Hungary, Poland, Ukraine and Germany.  In 1925, the Lemberger Congregation purchased the buildings and hired architect James J. Millman to design a shul, or synagogue, on the site.  The congregation took its name from its native city, Lemberg, at the time the center of the Lwów Voivodeship of Poland.  The city is known today as Lviv, Ukraine.
The new building was faced in red brick and trimmed in stone.  Millman's understated design relied mostly on Gothic arches over the openings.  Projecting brickwork between the second and third floors, and on either side of the central rondel above the entrance provided interest.  There were two entrances, one above a short, centered stoop, and another to the right for the women worshipers.
It is unclear whether the rondel was always bricked in, or if it originally contained a rose window.  In either case, it almost certainly displayed a Magen David, or Star of David.  Set within the parapet is a stone Decalogue, representing the tablets of Moses.
A force behind the erection of the new synagogue was the congregation's president, Leon Stand.  A Tammany assemblyman, he had been involved in Democratic politics for years.   Two of his five children were also politicians--Murray W. Stand was an alderman, and Bert Stand was secretary of the New York State Athletic Commission.
In the fall of 1926, the Lemberger Congregation gave a Leon Stand a dinner "in appreciation of his work for the building of the new synagogue," as reported in The New York Times.  The 58-year-old fell ill soon afterward and died on October 28.  Ironically, he was never truly able to appreciate the synagogue which he was so instrumental in making a reality.
On the top floor of the building was a hall, used by the Lemberg Sech Benevolent Society.  On the evening of January 28, 1939 there were about 60 members conducting a meeting there, while on the first floor another 250 persons were witnessing the wedding of Ylonda Reiz and Moses Schwartz.  Suddenly four gunmen broke into the fourth floor meeting. The New York Times reported that they "escaped with about $300 in dues and an estimated $200 in cash and jewelry taken from men and women at the meeting."
Among those robbed was Max Rothman, who lost a watch and chain valued at about $838 by today's standards.  Two days later, he spotted two of the youths, 19 year old Matthew (known as Max) Uchansky and 20 year old Edward Usakowski, standing on the corner of Third Avenue and 13th Street.  Rothman found a policeman and had them arrested.  On March 24, 1939 the two were sentenced to serve from 10 to 30 years in prison at Dannemora, New York.
A third robber, 22 year old Benny Amatsky, was also caught and sent to Dannemora.  Oddly enough, while he pleaded guilty, The New York Times reported that he "insisted that Uchansky was not an accomplice."  When questioned by the judge, however, he refused to identify the supposed other offender.
Then, three months after being incarcerated, Amatsky wrote to District Attorney Thomas E. Dewey offering to name all parties involved in order "to have Uchansky freed."  He wrote a similar letter to Uchansky's sister, Lucy.  Assistant District Attorney Whitman Knapp went to the prison, and got the names of two accomplices--Joseph Gordon (who had been shot dead two weeks after the synagogue robbery), and Sigmund Wisnowsky, aka "Mal."  Wisnowsky was found in prison on an unrelated burglary charge.
On July 31, 1940, The New York Times reported that Wisnosky, "on the witness stand yesterday admitted he had taken part in the holdup and swore that Uchansky had not."  The misidentification of Uchansky by the witnesses, said Judge George L. Donnellan, was "an honest mistake because of Uchansky's strong resemblance to Sigmund Wisnowsky."  Now, Donnellan, the same judge who had sentenced Uchansky, set his conviction aside and freed him.
It was not the only surprising twist to the case.  On August 22, 1940, Judge Jonah J. Goldstein freed two of the convicts on suspended sentences "because they had aided in bringing about the exoneration and discharge of the wrongly accused man."  The sentences were held "in abeyance, contingent on their future good behavior," said the judge.
While the neighborhood continued to be the center of New York City's Ukrainian population, by the late 1960's it was also highly Hispanic.  Around 1970 the former synagogue building became home to the Spanish language Iglesia Bautista Emmanuel, or Emmanuel Spanish Baptist Church.
In August 1976, the church was broken into and desecrated.  The New York Times reported, "The organ was set on fire, windows broken, obscenities were spread on the walls, and the washroom was vandalized."  It was the first of a string of arsons and vandalism in neighborhood churches.
In October, the Damascus Christian Church at 289 East 4th Street was destroyed by fire, and a week later the pastor of the Eglesia El Divino Maestro, at 250 East 3rd Street, received a telephone call saying, "Your church will be next."  All three of the churches were evangelical Protestant, Hispanic congregations.  A spokesman for the Accion Civica Evangelica, a civic and social-action group, explained, "Hispanic churches are most vulnerable because they are new to the neighborhood and not fully accepted."   It is unclear if the perpetrators were caught.
Iglesia Bautista Emmanuel remains in the converted synagogue--the Christian cross in the rondel happily coexisting with the Jewish Decalogue above it.
photographs by the author
LaptrinhX.com has no authorization to reuse the content of this blog
Posted by Tom Miller at 1:00 AM