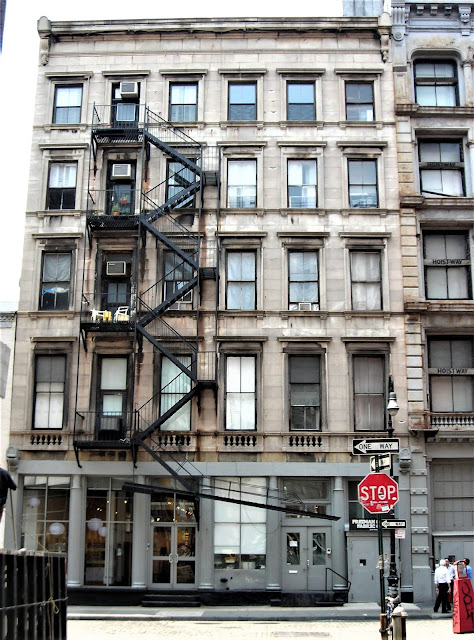 image via centurionre.com
The fashionable tenor of the Mercer Street block between Canal and Grand Streets in the early 19th century was evidenced in a description of the building at 7 Mercer Street in December 1830.  The rental ad called it "the elegant three-story brick dwelling house and lot No. 7 Mercer street...finished in the best manner."
The upscale, residential neighborhood would be completely transformed in the first years following the Civil War, as low brick houses were replaced with modern loft buildings.  One of the pioneers in the movement was J. J. Phelps, who did not wait for the construction flurry of the late 1860's and early '70's.  In 1859 he purchased and demolished the 25-foot-wide houses at 5 and 7 Mercer Street, and hired architect John B. Snook to design a replacement structure.
His five-story, Italianate style structure sat upon a cast iron storefront, manufactured by Daniel D. Badger's Architectural Iron Works.  Its fluted columns were originally capped by ornate Corinthian capitals.   The openings of the upper floors sat within prim architrave surrounds, those of the second floor being fronted with handsome balustrades.
It is probable that Phelps already had a tenant before construction began.  Although the building was not officially completed until 1861, the publishing firm of Mason Brothers moved in before then.  Headed by brothers David G. and Lowell Mason, Jr., in addition to academic books, the firm published sheet music and the biweekly New-York Musical Review and Gazette.
An advertisement in May 1860 listed the latest releases, including the three-volume Life of Andrew Jackson (which cost the pricey equivalent of $240 today), The Life and Times of Philip Schuyler, and Italy: From the Earliest Period to the Present Day.
A separate, but related, firm, Mason & Hamlin, shared space in the building.  Organized in 1854 by Henry Mason (David and Lowell Mason's brother) and Emmons Hamlin, the company produced and sold cabinet organs, sometimes called parlor organs.  An advertisement in The New York Times on May 11, 1863 announced:

Clergymen and Others interested are invited to call at our warerooms, Nos. 5 and 7 Mercer-street, New-York, and examine the new Cabinet Organs, with from one to twelve stops each, recently introduced by Mason & Hamlin.  They surpass all other instruments of the class, for smaller churches, chapels, Sabbath school-rooms, and private houses, while the prices are very moderate, viz, $70, $85, $95, $120, and upwards, each.  Dr. Lowell Mason, Dr. Thomas Hastings, and more than fifty of the most distinguished organists and musicians of New-York, Boston &c., bear witness in written testimony to the great value of these new instruments, and their entire superiority to all others.
Mason Brothers 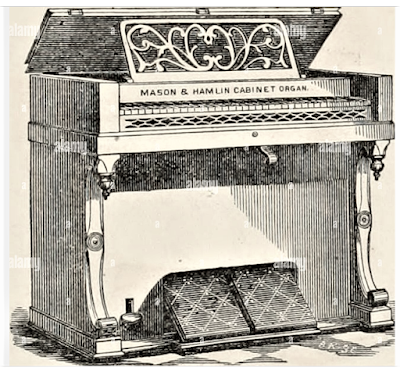 This model was among Mason & Hamlin's most scaled-down versions.  Others had elaborate cabinets and finishes.
In 1861 music publisher and agent Theodore Hagen leased space in the building.  He offered sheet music "of every description, foreign as well as American," and, like Mason Brothers, published a journal, the Musical Review and World.
Hagen had a knack for marketing.  In a December 21, 1863 article outlining the recent programs at the Academy of Music, The New York Times mentioned, "The lady patrons of the matinees were presented with copies of the polka which is published by Mr. Theodore Hagen, No. 5 and 7 Mercer-street."
In 1865 space on the upper floors was leased to brothers Bernard, Jessie and John Travis for their millinery shop.  It was a hint of the future of the district, which would become the center of the millinery and apparel trade by the mid-1870's. 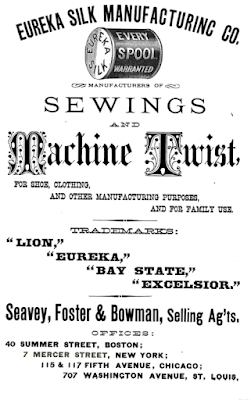 In the 1880's the John P. Lynch Knit Goods Co. and G. & M. Bamberger leased space in the building.  John P. Lynch had immigrated from Ireland and was fervently behind the cause of Irish Home Rule.  On June 17, 1886 The Sun reported, "A big pile of money came into The Sun office yesterday to help the Home Rulers win their battle.  The largest contributor was John P. Lynch of 5 Mercer street.  He sent a check for $200.  It was his second contribution to The Sun fund."  His initial check had been for $100, bringing his total donation to date to the equivalent of $8,500 today.
Lynch flourished his dual patriotism in a long letter included with his second check, which said in part:

As an American and an Irishman, I feel deeply grateful for what The Sun has done for human liberty in general, and for Irish liberty in particular, and I have no doubt I voice the feeling of millions.  May it continue to shed its brilliant rays on the subject of home rule until Ireland is a free and prosperous nation.

At the turn of the century, the ground floor was home to E. Bissell & Co., wholesale auctioneers.  The firm liquidated overstocked goods and inventory of closed factories.  On December 9, 1908, for instance, The 14th Street Store, owned by Henry Siegel, advertised "Toys Bought at Auction," and touted its recent purchase "right in the heart of the Christmas Season." The ad urged, "Think of it!  An auction sale of bright, new perfect toys sold by E. Bissell & Co."

On an upper floor was the Base Sorting Plant, Inc., operated by Ira M. Kaplan, Nat Meyers and E. A. Stone.  The firm repurposed scrap materials from garment makers.  But World War I brought a new purpose to the company.  On December 29, 1917, Textile World Journal reported that the business, "is henceforth to be operated in the interest of the Government."
The Daily Mill Stock Reporter added that since September, the Base Sorting Plant was "handling all clippings resulting from the cutting up of khaki cloth for military uniforms.  It is also handling the old khaki rags from the cantonments."  The owners "have tendered their services gratuitously to the United States Government for the duration of the war."  All profits were turned over to the Government.
The building continued to house apparel-related firms until the Soho renaissance in the third quarter of the century.   In 2002 the Grant Gallery was here, as was Rooms and Gardens, a furniture and lighting store. 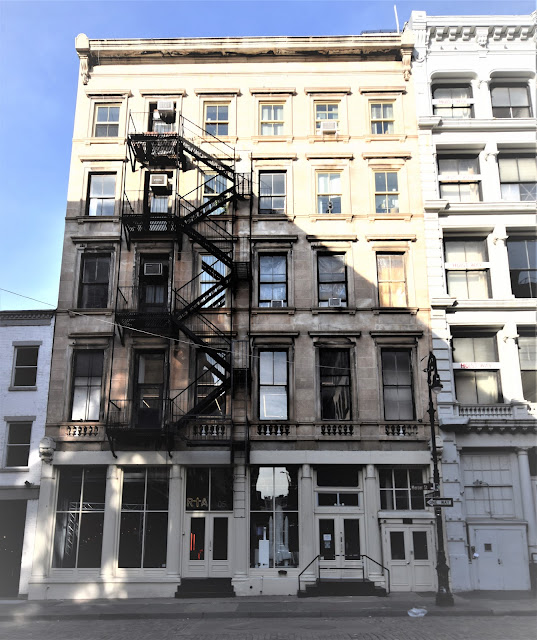 photograph by the author
A renovation completed in 2019 resulted in joint living-work quarters for artists above the ground floor retail space.  Although the cast iron capitals of the storefront have been lost, John B. Snook's handsome design is little changed after 160 years.
no permission to reuse the content of this blog has been granted to LaptrinhX.com
Posted by Tom Miller at 1:45 AM