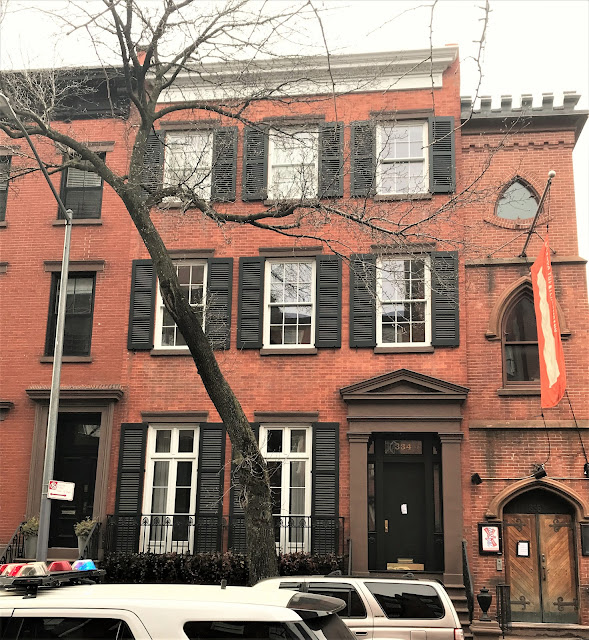 The 1811 Commissioners’ Plan laid out on paper the regimented grid of streets and avenues that would define Manhattan above 14th Street.  Sprawling country estates of the city’s gentry were now, at least on paper, divided into blocks and plots that would sprout rowhouses and commercial buildings.  Among them was Chelsea, the family estate of Clement Clarke Moore.  By the first years of the 1830's Clarke had given up in his fight against development and in 1834 began selling building lots along West 20th and 21st Street.  He was clear that he wanted his property to become an elegant residential neighborhood.  Available parcels carried the restriction, "Purchasers of lots...will be required to build fireproof houses of good quality."

In 1836 one of those "houses of good quality" was completed for Richard Redford, the cashier (a high officer) of the Commercial Bank of New-York.  Sitting next to the bucolic grounds of St. Peter's Church, Redford's brick-faced house was 25-feet-wide and three stories tall above an English basement.  Its Greek Revival design included intricate iron stoop and areaway railings, floor-to-ceiling parlor windows, and delicate egg-and-dart fascia board molding below the cornice.  The brownstone pedestals that flanked the stoop very likely originally held elaborate basket newels. 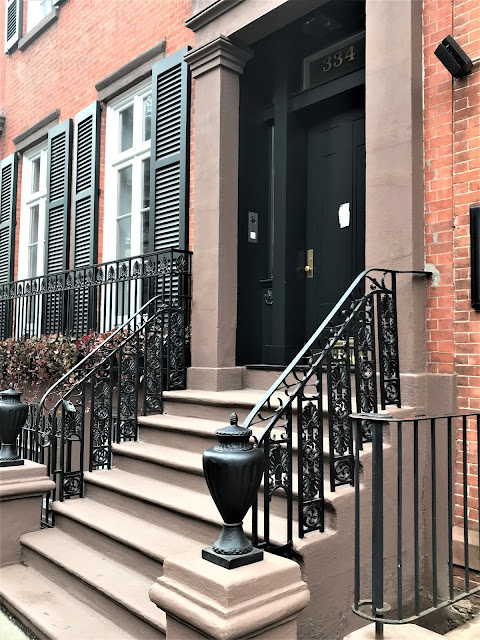 By the first years of the 1850's, the Henry Austin family occupied 133 West 20th Street (it would be renumbered 344 in 1865).  Henry and his son, Henry Jr., ran a shoemaking firm.  Living in the small house in the rear yard in 1851 and '52 was John Drake, a baker.
The house saw a relatively quick turnover in owners.  In 1867 Leopold Wise, another boot and shoe merchant, moved in with his family.  His partner, Charles Wise, presumably a brother, lived on Clinton Place (later West Eighth Street) at the time, but in 1870 he, too, listed his address here.  The Wise family remained until through 1875.
They were followed by the family of Joseph Bird, the president of the Manhattan Savings Institute at 646 Broadway.  Two years after Bird moved in, his bank suffered a massive robbery.  He left the bank at about 3:30 on Saturday afternoon, October 26, 1878, after having locked the heavy vault.  Only one other employee, the secretary of the bank, was still there.
At around 6:10 on that evening thieves broke in and made off with $3.5 million in cash and securities–approximately $93.7 million by today’s standards.  It was the most sensational bank robbery in United States history at the time.  Although he was, for the most part, above suspicion, Bird underwent grueling questioning.
Although he kept his position with the bank, Bird moved his family permanently to Larchmont Manor in Westchester County.  It was there that the wedding of the Birds' son, Constant Mayer Bird, to Lillias Ivy Hayward would take place on October 20, 1897.  The bride was the daughter of miniature portrait painter Gerald Sinclair Hayward.
In the meantime, their former home was being operated as a boarding house.  Living in the basement here in 1882 were Bridget Carney, presumably a servant, and her daughter.  The daughter slept on a makeshift bed on the floor, called a "shake down."  At around 10:30 on the night of September 22 that year, Bernard Reily arrived "and attempted to make himself at home," according to the New York Dispatch.  He told Bridget he had lost the key to his room on 9th Street and wanted to be put up for the night.  The newspaper said, "She would not have him, and he had to make his exit."
Then, at around 5:00 in the morning, Bridget was awakened by her daughter's screams, "Mercy! mercy! mother there's a man in the bed!"  Bridge jumped from her bed and attempted to force Barney out of the room, and he struck her with a chair.
In court three days later, the daughter testified.  The New York Dispatch reported, "She said she was fast asleep, when she felt something hairy rubbing her chin...When she found it was a man in bed with her, she yelled like mad for her mother."
Barney responded, "All I have to say, it is an entire lie.  It wasn't a bed.  It was a shake-down."
The judge countered, "Well, even if it was a shake-down, what right had you to get on the shake-down?"
"I lost my key and I had to go somewhere, this was a common low basement.  She took an axe to me and I defended myself."
The judge was unmoved and Barney was held on $100 bail, a considerable $2,600 in today's  money.
By 1886 the boarding house was run by Susan F. Walker, a widow.  That year another servant, Barbara Williams, was the victim of a crime.  She was standing at the jewelry counter of Macy's on December 14, 1886, when 28-year-old Mary E. Lyon snatched her pocketbook containing $5.  She was tracked down and faced a judge on February 1, 1887.  As had been the case with Bernard Reily, her defense was feeble.  The New York Herald reported, "Her plea was that she did not take the pocketbook with the intention of stealing it." 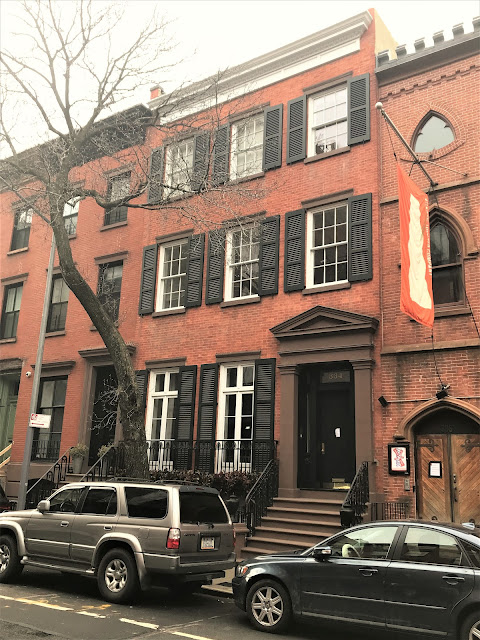 At some point a triangular pediment was added above the entrance.
The upscale nature of boarding houses was reflected in the number of boarders--the fewer there were, the more select the house.  It appears that there were never more than three boarders, with or without wives, here at any given time during the 1880's and '90's.
The house was leased, briefly, by St. Peter's Church as its rectory.  Rev. Oliver Scott Roche occupied it in 1905 and 1906.  Real estate operators Joseph W. Cushman & Co. purchased 344 West 20th Street in 1911, leasing it to single families for years.
By mid-century the once-stylish block had declined, and 344 West 20th Street was operated as an expensive rooming house.  Typical of the residents in 1963 were Ricardo Alonzo Gardia, Francisco Matos, and Roberto Vargas, all of whom had seasonal jobs as dishwashers at the Mooring Restaurant in Cold Spring Harbor.
Change came in 1975 when a renovation resulted in two apartments each in the basement and parlor level, and a duplex above.  Around the turn of the century the two-bedroom duplex became home to artist Karl Mann.  He redecorated it in what journalist Aisha Carter called a "'Jungle Book' vibe." 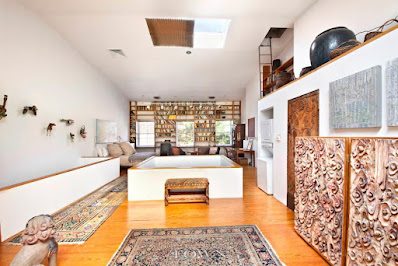 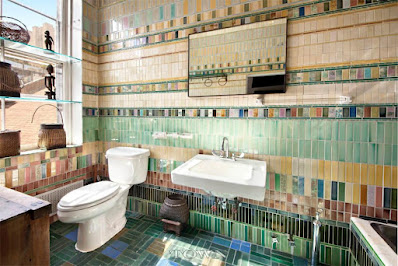 Karl Mann's décor was personal.  photos by Town Residential
In 2019 the house underwent a two-year renovation by Scott Wilpon, of Sterling Equities.  (The property was owned by the firm at the time.)  The facade was restored and the interior returned to a single-family dwelling.  The renovations resulted in five bedrooms, a screening room, wine cellar and gym.  It was placed on the market in March 2021 for $25 million. 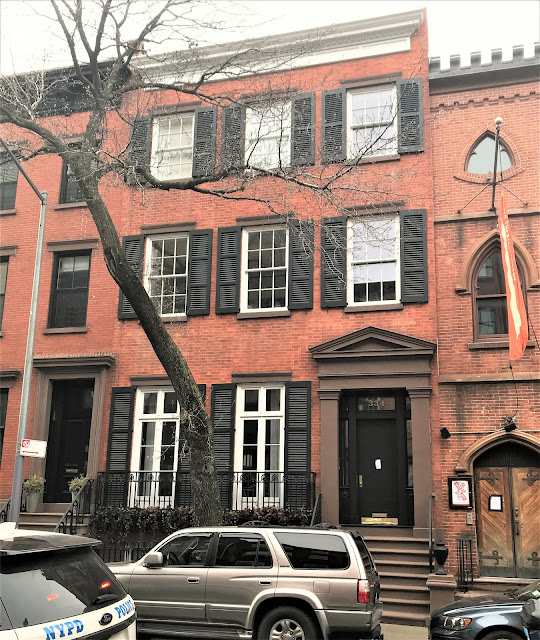