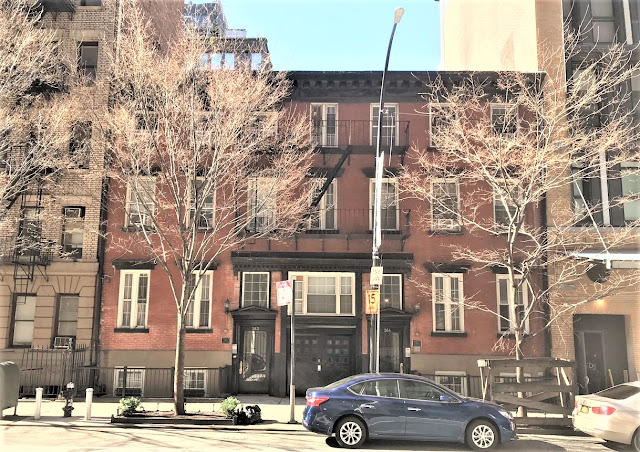 Around 1842-44 the mirror-image brick houses at Nos. 232 and 234 West 15th Street were completed.  (They would be renumbered 362 and 364 in 1860.)  Three stories tall and three bays wide, they were designed in the Greek Revival style.  An unusual feature was the double horse-walk between the two stoops.  Tunneling through the houses to the rear yard, it provided access to accessory structures--small stables, shops or possibly houses for rental income--and was large enough to accommodate a cart.
In 1847 No. 362 was home to James Vandenburgh and his family.  A builder, it was possibly he who was responsible for the construction.  Thomas K. Mills, an embroidery merchant, lived next door that year.
Theodore Lavielle and his wife, the former Amelie Gervaize, followed Vandenburgh in No. 362.  Lavielle died at the age of 81 on December 7, 1853.  It was soon purchased by attorney Matthew Campbell.
Like all financially comfortable New Yorkers, the Campbells spent their summers in the country.  The unoccupied townhouses provided tempting opportunities to burglars.
The Campbells extended their stay through September in 1857--a decision that nearly cost them dearly.
While making their rounds at around 4:30 in the morning on September 28 police officers Tuorney and Fischer noticed three "suspicious-looking men coming out of a vacant lot," as reported by the New-York Daily Tribune.  They were carrying a large bundle of "costly wearing apparel, valued at about $400."  (That amount would exceed $12,000 today.)  Upon further investigation, the officers discovered that a door in the rear of the Campbell house had been forced open.  "The house had been thoroughly ransacked, and a large quantity of goods had been packed up for removal," said the article.
The Rev. Joseph R. Mann moved into No. 364 around that year and would remain through 1861 when the McQuoid family took possession.  Robert McQuoid was a partner with his brother, William McQuoid, Jr., in Hudson River Pottery, the business started by their father in 1838.  It was located on West 12th Street and Tenth Avenue.  The brothers' widowed mother, Martha, lived in the house as well.  She died in the house on January 19, 1865 at the age of 83.
Interestingly, around that time William changed the spelling of his surname to Macquoid.    The firm's name was changed to William A. Macquoid & Co. around 1868.  In her 1879 book, The Ceramic Art, Jennie Young called it "the oldest [pottery] establishment in New York."  She explained,

The only products, until within a year ago, were store-ware and glazed earthen-ware.  At that time the demand by decorators for terra-cotta in the choicest antique forms led the firm to add it to their list of productions.  The experiment was successful.  The paste is fine and well worked.

Mary Killmer moved into No. 362 around 1866.  She was the widow of Abiram P. Killmer, a dentist, who had died in 1857.  Living with her was her son, William G., who was employed as a clerk in the stationery manufacturing firm of J. Q. Preble & Co.
Mary took in boarders to make ends meet.  From 1872 to at least 1876 Barbara Evans lived in the house.  She taught in the Primary Department of Grammar School No. 11 on West 17th Street.  A widow, Margaret Highet, was here by 1879, as was Albert Demarest, a "boatman."  Given the female population of the main house, it is possible that Demarest lived in the rear building.
For at least a decade, starting around 1876, William D. Duyckinck and his family lived next door at No. 364.  He owned the Duyckinck & Co. gentlemen's furnishings store at No. 707 Broadway.  Like Mary Killmer, the Duyckincks took in boarders.  In 1886 William Lupton, an importer, and Matilda M. Ogden, the widow of E. D. Ogden, were boarding with the family.
Two years later No. 364 was converted to Ferdinand J. White's School of Religious Music.  He boasted the "large and fine-toned organ" and a "complete library of liturgical and musical works."  The school offered instruction not only in "every branch of choir and church music work," but in the "ceremonies of the church, the relation of the choir to the altar, chanting, [and] the liturgy." 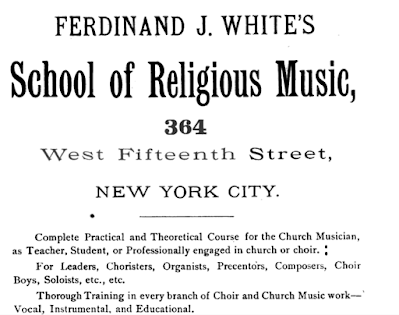 Sadlier's Catholic Director, 1888 (copyright expired)
It appeared that the twin houses would not survive past the first decade of the 20th century.  On March 2, 1910 the New York Produce Review reported that Conron Bros. had purchased the entire block on Ninth Avenue from 14th to 15th Street, extending east to No. 357 on West 14th Street, and 362 on West 15th Street.
But if Conron Bros. had envisioned a large commercial structure on the site, it did not come to pass.  The two houses were converted for business, with the stoops being removed and the entrances lowered to street level.  The Ireland & Nelson Paper Company operated from No. 362 and the Park Trucking Company, Inc. was in No. 364. 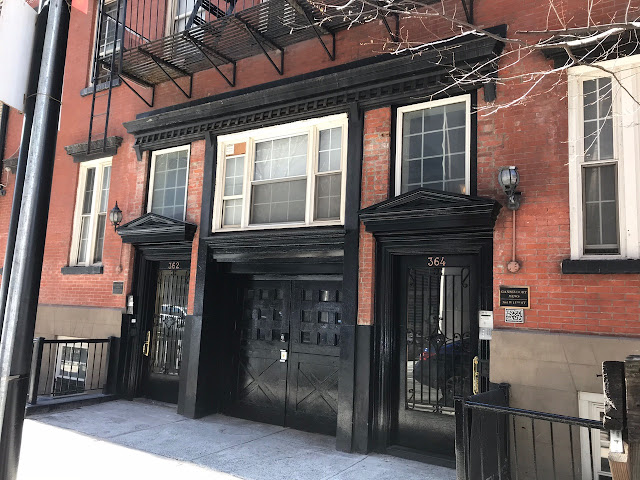 The double horsewalk is protected by heavy doors today.
The upper floors were rented as apartments.  In 1915 Fitz McCorney, an elevator operator at the Hotel McAlpin, and Dr. James T. Manchester, live in No. 362, for instance.
Manchester found himself in legal trouble in the summer of 1916.  A terrifying epidemic of infantile paralysis, or polio, swept the city that year.  On August 23 The New York Times reported that the 70-year-old had been arrested "on the charge of selling a fake cure for infantile paralysis."  He sold his mixture of alcohol, capsicum and sassafras for $1 a bottle (about $25 today), promising that it was a "sure cure for infantile paralysis and various other diseases."
Living in No. 362 during the Depression years was the Rioz family.  They received a shock on July 28, 1935.  The New York Post reported, "A ten-day-old baby girl with blue eyes and blonde hair was found last night outside her door by Mrs. Guadalupe Rioz...Mrs. Rioz turned the baby over the the New York Foundling Hospital." 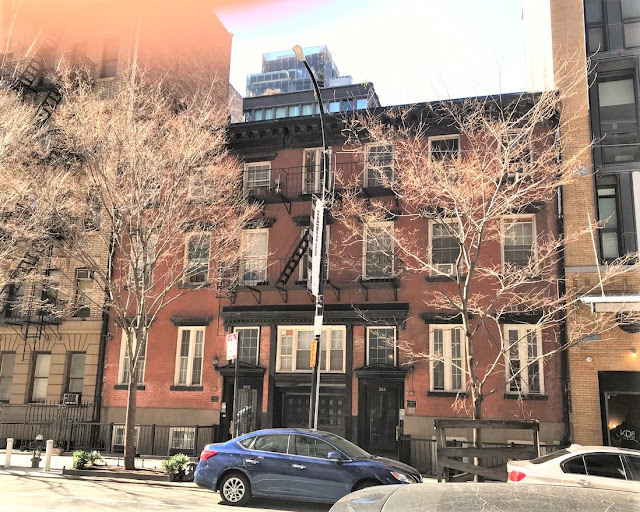 In the summer of 2020 the Landmarks Preservation Commission held a hearing regarding a proposed glass and steel tower which would replace all but the facades of the Greek Revival structures at 351-355 West 14th Street and along Ninth Avenue.  The discussion included the comment "a pair of non-landmarked Greek Revival houses at 362-364 West 15th Street would likely not survive."  The proposal to gut the historic structures and to demolish the 15th Street twins was declined.
photographs by the author
Posted by Tom Miller at 1:52 AM