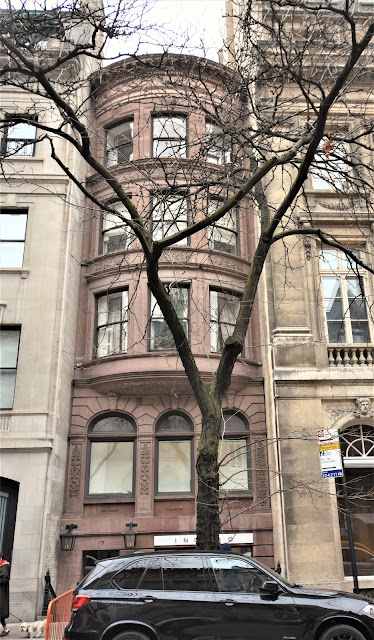 In 1879 the prolific architect John G. Prague designed four high-stooped brownstone houses on the north side of East 64th Street, just steps from Central Park, for developer William F. Croft.  Completed the following year, No. 17 became home to the family of financier Charles L. Rathborne.
The head of the brokerage firm C. L. Rathborne & Company, he put the title to the new house in the name of his wife, Elizabeth (known as Bessie).  Living with the family was Elizabeth's father, Joseph Hagan.
Elizabeth's entertainments were detailed by the society columnist.  Such was the case on January 26, 1882 when The New York Times reported, "Mrs. Charles L. Rathborne gave a brilliant reception last evening at her residence, No. 17 East Sixty-fourth-street."  After providing the impressive guest list, the article noted, "The supper was served by Clark."  (Clark was one of the three top society caterers at the time.)
In 1885 Elizabeth hired a Swedish butler named Theodore Hahr, who left after only a few days.  Nothing more was thought about it for several months--not until Mrs. Duncan Cryder took a pair of diamond earrings and a diamond ring to Tiffany's to have them reset.  The pieces had originally cost her husband $3,000.  She was "astounded and mortified to learn that they were not diamonds, but glass," reported the Illustrated Police News.
Mrs. Cryder directed suspicion on her former butler, Theodore Hahr, who--just as he had done with the Rathbornes--disappeared after working only a few days.  Knowing that the Rathbornes had also employed Hahr, Mrs. Cryder suggested to police that they should check Elizabeth's jewelry.  The Illustrated Police News said, "an examination showed that Mrs. Rathborne's earrings also, which had cost nearly $1,000, has been successfully tampered with and glass substituted for the expensive jewels."   Hahr was traced to New Jersey and arrested on May 25, 1886.  Happily for Elizabeth, The Evening Post reported, "Inspector Byrnes said that the diamonds stolen from C. L. Rathbone [sic]...had been found pawned in Jersey City and would be recovered during the day."
On May 14, 1887 Joseph Hagan died in the house at the age of 89.  Hagan was a Quaker and his funeral was not held in the Rathborne residence, as some might have expected, but in the Chappaqua Meeting House.
Despite technically being in mourning, Elizabeth turned her attention to her daughter's coming-out.  On December 2, 1887 The Evening Telegram reported, "Mrs. C. L. Rathburn [sic], No. 17 East Sixty-fourth street, gave a large reception to introduce her daughter, Miss Rathburn [sic], yesterday afternoon."  The article added, "An elaborate collation was served by Clark."  One can imagine Elizabeth's annoyance with the newspaper's misspelling of their names.
Elizabeth died on New Year's Eve, 1890.  Her funeral was held in St. Thomas's Church and, like her father, she was buried in Chappequa, New York.
Charles sold No. 17 East 64th Street to sisters Elisabeth M. and Anna Catherine Meyer in 1895.  The women were the daughters of millionaire sugar refiner Cord Meyer and his wife Catharina.  Never married, they lived quietly and on the few occasions that their names appeared in society columns, it was always as a pair.  They had three brothers, John N., Cord, Jr., and Christian Moller Meyer.  Their father had died on June 10, 1891, leaving each of the children approximately $7 million.
The sisters immediately hired architect Gilbert A. Schellenger to remodel the house.  He and the new owners may have initially wanted to do a complete makeover, removing the stoop and pulling the front forward, but there was a problem.  A restrictive clause in the deed expressly prohibited the "building or extension thereof on said premises beyond a front line established."  And so Schellenger's changes were less drastic.  He gave the house a full-width, three story bowed bay above the parlor floor and added Renaissance Revival decorations.  The cost of the improvements was $8,000--or about $251,000 today. 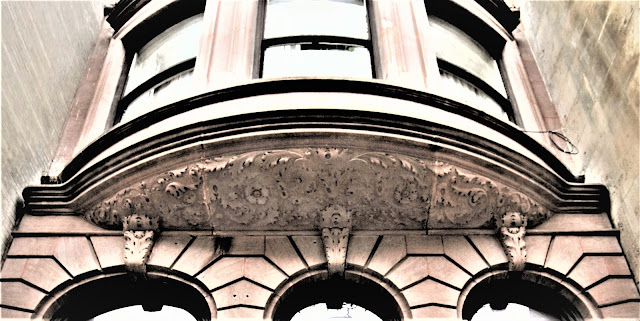 Complex leafy carvings decorate the underside of the bay.
Elisabeth and Anna shared a summer home with their brother Christian in Maspeth, Long Island.  The Meyer estate held two "costly mansions in the centre of a handsomely-laid-out park," according to The New York Times.  The families of brothers Cord and John shared the other residence.
While most New York socialites traveled to Europe routinely--some going to Paris and London every year to shop for new fashions--the Meyer sisters' trip in the summer of 1897 was only their second.  The Times Union reported on November 18 that they "returned from Europe in the early fall and express themselves as highly pleased with their sojourn abroad....While in Germany they visited the homes of their ancestors.  They were intensely interested in the novelties presented in Switzerland and Holland."
Elisabeth died on April 2o, 1900 at the age of 43.  Her funeral was held in the 64th Street house two days later.  Anna Catharine lived on in the house for another two decades, now alone with her servants.  She died at the age of 63 on September 6, 1922.  Her funeral, too, was held in the drawing room.
By 1927 the house was home to Henry Huttleston Rogers, Jr. and his wife, the former Mary Benjamin.  Huttleston was the son of Standard Oil mogul, Henry Huttleston Rogers.  The house was the scene of the funeral of Mary's father, Dr. George Hillard Benjamin, on November 12, 1927.
The following year the house was converted to apartments.  The renovations included the removal of the  stoop, lowering the entrance to the former basement level, and remodeling the original doorway to a window. 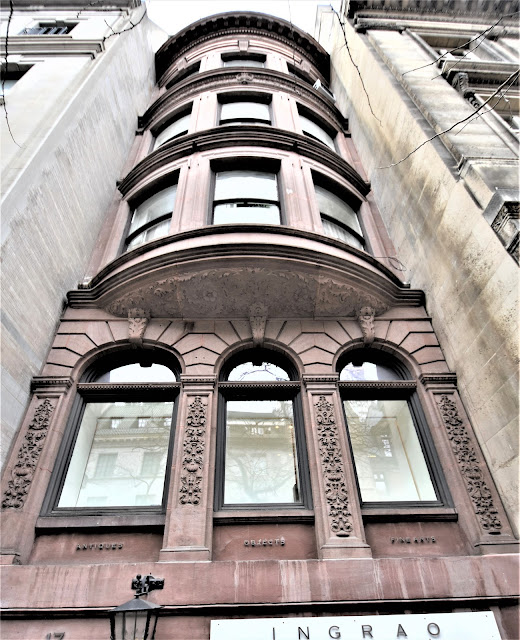 The Renaissance Revival panels to the left do not extend to the base of the pilasters--evidence of the stoop railings that once terminated there.
Among the original well-heeled residents was attorney William H. Harkness, Jr., another Standard Oil heir.  Shortly after moving in, on June 18, 1928, his engagement to Jane G. Penfold was announced.
Another renovation, completed in 1953, resulted in a commercial space on the ground floor.  It became the office of Magnum Photos, founded in 1947 by photographers Robert Capa, David "Chim" Seymour, Henri Cartier-Bresson, George Rodger and William Vandivert.
In July 1957  The Blackamoore Showroom opened here.  The owners, Charles Meyer and Randall Kenney, designed the furniture exhibited and sold in the shop.  Only five months later the Andre Emmerich Gallery opened in the space.  Its premier exhibition, according to The New York Times on December 20, included "recent paintings by five American artists, a selection of Northwest Indian and pre-Columbian sculpture and several classics, among them a Degas pastel and two Miro oils."
Beginning in 1959 the Edward R. Lubin Gallery, which dealt in Gothic and Renaissance antiques, shared the space.  Both galleries remained for years.  Today the space holds the offices of the design architecture firm Ingrao, Inc. 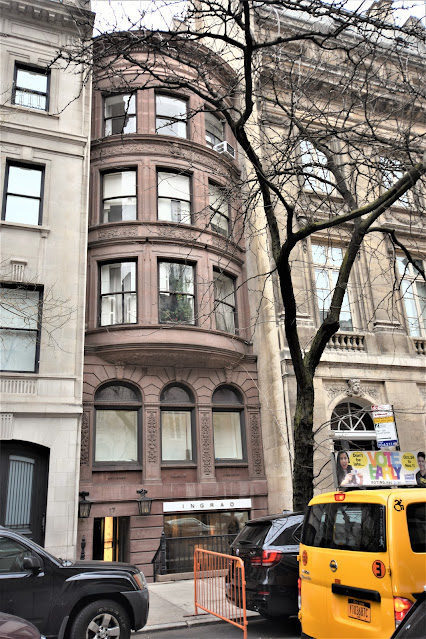 Surrounded by opulent mansions of the early 20th century, the Meyer house looks a bit out of place, a remnant of the previous chapter along the block.
photographs by the author
no permission to reuse the content of this blog has been granted to LaptrinhX.com
Posted by Tom Miller at 1:13 AM