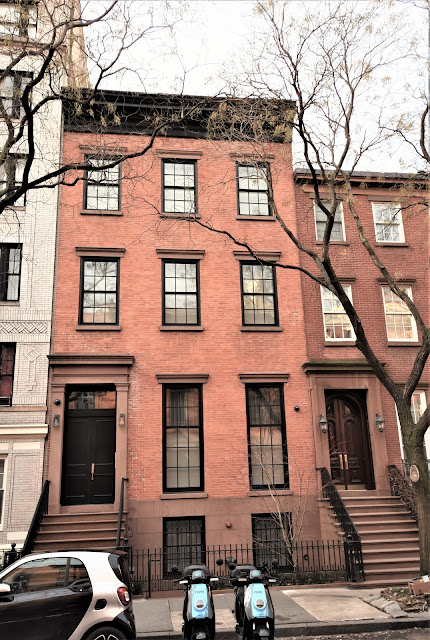 A stonecutter and mason, Abisha Smith also operated a flagstone business on Washington Street.  In January 1835 he purchased six building lots from Clement C. Moore.  Intent on creating an upscale residential neighborhood on what had been his family's country estate, Chelsea, Moore wrote restrictive covenants into the deeds, demanding that at least one "substantial residence" be erected within a year of the purchase.
In compliance, Smith completed a 25-foot wide Greek Revival home on the easternmost plot in 1836.  No. 244 West Twenty-Second Street (renumbered 338 in 1868) would be somewhat grander that the rest of the row, most likely because Smith always intended it for him and his wife, Lydia Ann.   Three floors high above an English basement, the ceilings inside were higher than its neighbors, resulting in the house standing noticeably above the others.
Smith's business was substantial.  In 1822 he had been awarded the $2,000 contract to supply the stone flagging for the Fulton Market--a significant $45,000 sale in today's money.  Much of the stone he sold came from his own quarry upstate.  In his 1880 History of Ulster County, Nathaniel Bartlett Sylvester noted "The first bluestone (tradename) quarried as a matter of commerce in the United States was at Mosey Hill...about 1829-30.  This quarry was owned by one Abisha Smith of New York."
It is unclear if Abisha's brother, Bezaliel F. Smith, was originally in partnership with him.  In 1833 both signed a letter to Congress from New York businessmen lobbying for the continuance of paper money at a time when a return to only coins was being considered.  Abisha listed himself as "stone dealer" and Bezaliel wrote "ditto."
In 1841 Bezaliel erected a row of homes slightly to the east on West 22nd Street.  They were mirror images of Abisha's row.  He lived at No. 222 West 22nd Street (later 316) until 1852 when he moved in with Abisha and Lydia Ann.  If the brothers had been in partnership, that was amicably dissolved by now, with Bazaliel's stone business, Bazaliel F. Smith & Co., at the corner of Tenth Avenue and West 19th Street.  Bezaliel was highly involved in the public school system, holding the positions of Inspector and trustee of the 16th Ward Public Schools.
In the 19th century single blocks were sometimes renamed--officially or not--to give them an air of exclusivity.  It resulted in Depau Row on Bleecker Street and St. Mark's Place on East 8th Street, for instance.  The block on which the Smith house stood was renamed Lenox Place (sometimes spelled Lennox), but unlike Depau Row and St. Mark's Place, the name Lenox Place was never truly embraced.
For that reason, most likely, when the Smiths advertised for a boarder in 1855, they covered both bases:

Board--A private family, having more room than required, will let a parlor on second floor, also one on the third, to a lady and gentleman, or three single gentlemen, at a moderate price.  Modern improvements.  Location desirable.  No. 224 West Twenty-second street, Lenox place.

It was not unusual for even well-to-do families to take in a boarder or two.
Lydia Ann was looking for additional domestic help in 1856, advertising for "a neat, tidy girl, to do general housework.  An American, English or German girl preferred."
Abisha had retired by the time of that advertisement, city directories listing him as "late stone."  The Smith family continued to live in the house until 1864 when it was sold to Jessie T. Higgins and his wife, Sarah M. Higgins.
Higgins operated a "fancygoods" store at No. 893 Broadway.  His son, Thomas, worked in the business as a buyer.  A fancygoods store was different from a general or drygoods store.  General stores sold food, like canned goods, as well as kerosene lamps, brooms, and other household items.  Drygoods stores dealt mostly in fabrics, linens, and related goods.  Fancy goods included a range of items like ribbons, buttons, ceramic figurines and such.
As the Smiths had done, the Higgins family rented a room (although unlike their predecessors, they did not offer board).  An advertisement in September 1872 offered:

To Let--A large front room, newly and prettily furnished, at a moderate rate; suitable for one or two persons; family private; references.

The Higgins family remained in the house for more than two decades, selling it to John D. McLean on February 10, 1872 for $13,500 (about $292,000 today).  He and his wife sold it just five years later for a substantial profit.  J. and W. Darling purchased it for $18,000 in June 1887.
The Darlings operated No. 338 as a boarding house.  Among the early residents were a single mother, Catharine Stark, her young son and her mother.  Catharine was married when she was 17-years-old.  Her baby boy was born in 1882.  Her husband died in 1884, leaving the 19-year-old widow to raise the toddler.
Rearing a child alone was not an easy task in the 19th century, especially with limited income.  In 1888 Dr. W. T. Miller began treating Catharine for "nervous prostration," known today as nervous exhaustion at best or a nervous breakdown at worst.  On the afternoon of February 24, 1889 Dr. Miller received an emergency call to the 22nd Street house.  Catherine Stark was dead at the age of 24.
The Evening World reported "An overdose of morphine was the cause of death.  The doctor was inclined to think she had taken it with suicidal intent, and for that reason refused a burial certificate and reported the case to the police."  Suicide was not only against the law, but brought shame to 19th century families.  Catharine's mother, therefore, was quick to respond.  "The mother, Mrs. Scheu, denies that her daughter committed suicide.  She says Catharine has been ailing for some time, and had been in the habit of taking morphine to relieve pain."
Two other boarders in 1895 brought unwanted press attention to the house.  On November 8 The Sun reported "Two nests of scamps were unearthed accidentally by the police on Wednesday, and two gangs of lawbreakers were bagged."  Included in the round-up were "John G. Smaling, a waiter, and Lena Smaling, his reputed wife, of 338 West Twenty-second street."
In an attempt to track down the perpetrators of a string of burglaries, undercover detectives closely watched pawn shops.  When the Smalings dropped off some expensive items on November 6, they were followed back to their rooms.  There they found "a silver-handled hair brush marked 'L.O.S.,' a leather card case stamped 'J. Stewart Barney, 134 West Thirty-seventh street,' and seventeen pawn tickets for clothing and jewelry."  Smaling confessed to robbing four homes.  At an address found in his pocket detectives arrested seven other gang members and discovered 40 pawn tickets, two trunks of expensive clothing and other stolen goods.
Alina Stevens was arrested in June 1903--but under much different circumstances.  Alina arrived in New York from Toledo, Ohio in January that year and took a room in the 22nd Street house.  She spent $130 on a course in dress designing, completed the course, and was now engaged to a letter carrier and attempting to earn a living as a modiste, or high-end dressmaker.
On the evening of June 25 she was waiting for a street car on Fourth Avenue when a man stepped up and said "good evening."  According to Alina, he said "something about the weather or the cars, and she answered him.  Finally he asked her to take a walk, but she told him she was in a hurry to go home.  Then he told her he was a policeman and that she was under arrest."  Alina was taken in on charges of prostitution.
While she sat in a cell awaiting her hearing, a female probation officer went to the boarding house to check on Alina's story.  In court she told the judge "This woman is entirely respectable...The woman with whom she lives says there is not the slightest doubt of her good character."  She added, "Perhaps Miss Stevens made a mistake in allowing the officer to speak to her, but she is not a New York girl, and where she comes from people are more hospitable than in New York."
A tearful Alina was discharged after the judge cautioned her "But let me say to you, a stranger in this great city, that it is unwise to even notice men whom you do not know."  Miss Smith, the probation officer, accompanied Alina to the boarding house to "explain fully to her friends the cause of her detention overnight," said The New York Times.
No. 338 was returned to a single-family home in 1919 when it was sold to William E. Devlin, who operated a trucking business.  Following his death it was sold to E. C. Roach, "for occupancy."  The end of the line as a private home came in 1932 when architect Abraham Grossman was commissioned to convert the house to two duplex residential spaces--one on the basement and parlor levels and the other on the second and third.
Five years later major change came when architect Joseph Mitchell created furnished rooms throughout with a single apartment in the basement level--possibly for the janitor.  It was at this time that the stoop and cornice were removed and the brownstone lintels shaved flat. 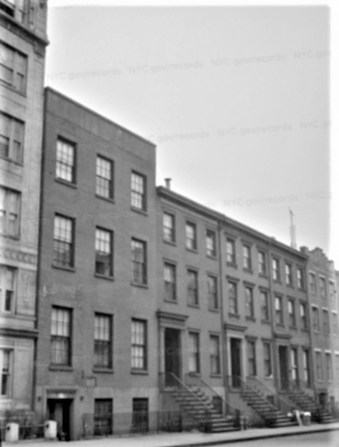 The 1937 renovations resulted in a featureless, bland facade.  via the NYC Dept of Records & Information Services.
Among the residents in 1979 were Charlotte Louise Rivenburgh, who worked in public relations for the Metropolitan Museum of Art, and her husband Harold.  The couple was financially comfortable enough to have a summer place near Binghamton, New York.
Harold was Charlotte's second husband.  Her first marriage ended in divorce.   She married Rivenburgh about a year after he was released from prison on charges of armed robbery.  He soon founded and headed a rehabilitation center in Manhattan for prison inmates.  Tragically, in August 1979 Harold found his wife's body in the backyard of their summer home.  The New York Times reported "There was a single, small-caliber bullet hole behind her left ear."  Police noted that Harold was not a suspect. 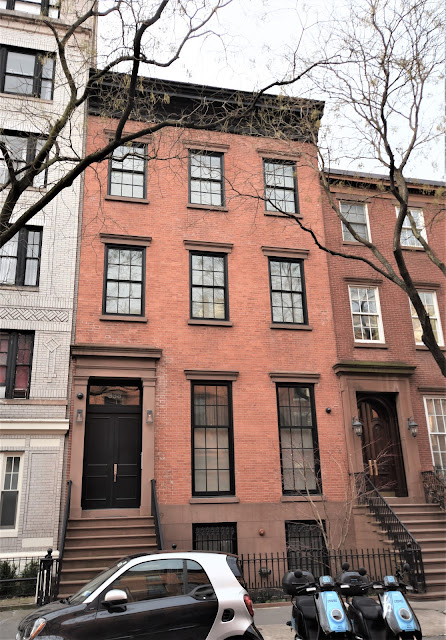 The Smith house received a Pygmalion-type makeover when a substantial renovation completed in 2015 returned it to a single-family home.  Amazingly, the architects returned it nearly to its 1836 appearance.  The stoop was refabricated as were the Greek Revival entrance and molded lintels.  An Italianate style cornice (slightly out of keeping with the style but appreciated) was attached to what had been a blank parapet.
photographs by the author
no permission to reuse the content of this blog has been granted to LaptrinhX.com
Posted by Tom Miller at 1:38 AM