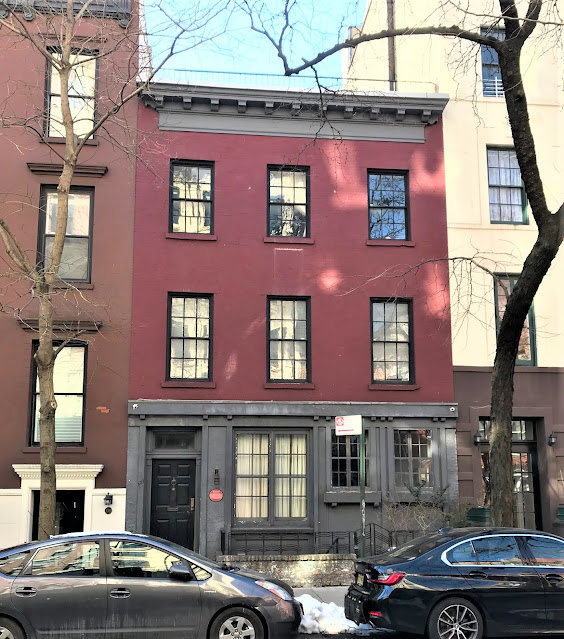 In 1847 Hamilton Fish erected a three-story stable building at No. 88 East 19th Street (renumbered 128 in 1865).  It was leased to Lewis G. Irving who moved his family into the upper floors and conducted his storage business from the stables area.  His was a significant operation with two other locations further downtown.
Five years later John T. Smith took over the lease.  He was a carriagemaker in partnership with William H. Ludlum.  Smith's family now lived in the upper floors with the Ludlum & Smith carriage factory on the ground floor.  Theirs was a small operation, as evidence by the size of the space.  As vehicles were completed, advertisements appeared like this one from October 22, 1853:

For Sale--One two seated Rockaway and light wagons with and without tops.  Inquire at Ludlow & Smith's, 88 East Nineteenth street.

On March 1, 1859 the partners issued a statement that "the copartnership heretofore existing under the name of Ludlum & Smith, carriage builders, 88 East Nineteenth street, is this day dissolved by mutual consent."
Hugh McGarr had listed himself as "horseshoer" until now.  Perhaps seeing the opportunity to expand, he rented the building and partnered with carriagemaker David F. Waldron.  As Smith had done, he moved his family into the floors above the new carriage shop.
The factory's location teetered between the boisterous Little Germany district to the east, filled with tenements, bier gartens and German social clubs, and the increasingly elegant residential neighborhood to the west.  Gramercy Park, just two blocks north, was ringed with the mansions of some of Manhattan's wealthiest and most influential citizens.
It resulted in a perhaps unexpected architectural compromise around 1874.  Neil McLean leased No. 128 East 19th Street and renovated the upper two stories as a home for his family.  He used the ground floor for his private stable.  When he sold his wife's "handsome phaeton horse" in May 1874 he noted "will be sold from a gentlemen's private establishment for want of use, very low for cash.  Call at private stable No. 128 East Nineteenth street, during the week."
Living upstairs with McLean were his wife, Catharine, and sons Archibald and William.  Archibald was a stock broker with offices at No. 81 Cedar Street and William was a clerk.
Neil McLean died here the house on December 22, 1875.  His family stayed on and in 1877 Archibald joined other well-heeled businessmen in complimenting the Commissioners of Police in a letter to the mayor.  It said in part that the commissioners had done much "toward raising the discipline of the force, weeding out the faithless and incompetent officers, preserving the public peace, and enforcing law."  McLean's name was among some of the most recognized in city, including Sloane, Townsend, Morgan, Dodge and Chase.
The McLeans left East 19th Street by the mid-1880's.  The upper floors of No. 128 were being operated as a rooming house in the 1890's and early 1900's.  The varied tenant list included Steve Maley, who advertised himself as "character Irish comedian" while living here from about 1888 through 1890; carpet cleaner David McCloskey; and Edward Doran, the chauffeur of Baron Schlippenbach, Russian Consul General, in 1909.
An eyebrow raising ad was placed by one tenant on May 3, 1893, that read: "Colored Ladies--Wanted, three athletic colored girls immediately; good pay; call to-day.  128 East 19th st."
Astounding change began on the block in 1911 when architect Frederick Junius Sterner transformed an outdated Greek Revival house into a stucco-covered Mediterranean-style residence.  Quickly old houses and stables were revamped into romantic artists' studios and homes, earning the block the nickname “The Block Beautiful.”
In 1913 the Fish estate leased No. 128 East 19th Street to William Nelson Burritt and his wife, the former Anna Castle.  Both were well-known vocal coaches.  William was described by Music and Musicians as "one of the best known and ablest vocal teachers in the country." 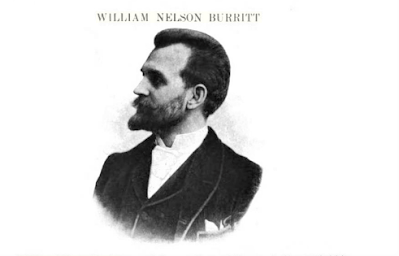 William Nelson Burritt, Music & Musicians, 1899 (copyright expired)
The Burritts joined the Block Beautiful movement and transformed No. 128.  On August 3 The Sun noted, "It was a ramshackle affair when Mrs. Burritt, who might well be called a stable studio expert, since she has already remodeled at least three of them, took hold of it.  To-day it is as artistic an abode as can be found anywhere in town and possesses many features that are both novel and artistic."
The Burritts spent just over $37,000 in today's money in remodeling the building into a two-family house for themselves and their daughter Katherine and son-in-law, attorney Harold S. Deming.  Anna had acted as her own architect.  She joined the main structure with the smaller building in the rear yard, creating a footprint 30 by 60 feet.  The carriage bays became a short window and an entrance to the Deming's space which mirrored the Burritt's doorway to the left.  "The remaining space was thrown into two broad French windows in the centre," said The Sun.
The Burritts' reception room was furnished in Mission style and "On the walls are scores of autograph photographs of musical and other celebrities here and abroad," according to The Sun.  Also on the ground floor were Anna's studio, the "7 o'clock dining room" and a kitchenette.  The Burritts also enjoyed a "bedroom, guest room and library" on the second floor.  The Demings' space was similar to the Burritts.  "Along with the living quarters of each domicile are closets innumerable, big ones of the sort one expects to find only in country houses," said The Sun.  "All sorts of contrivances for the convenience of the housekeeper are there too, as well as special fittings for the feminine wardrobe."
One contrivance that Anna Burritt did not include was electricity.  The Sun said "Like a country cottage in the midst of a city block it is...Old fashioned latches have replaced door knobs and candles the more modern electric light."

The New-York Tribune, October 17, 1920 (copyright expired)
Having leased the property for nearly a decade, the Burritts purchased it in December 1919.  In reporting on the sale the New-York Tribune noted "This house was formerly an old stable and was altered by the present tenant into one of the most attractive studio apartments 'on the block beautiful.'"
By 1920 the Burritts were leasing the space formerly occupied by the Demings to tenor Lambert Murphy and his "friend and musical confrere," as described by Musical Courier on January 8, Clifford Cairns. 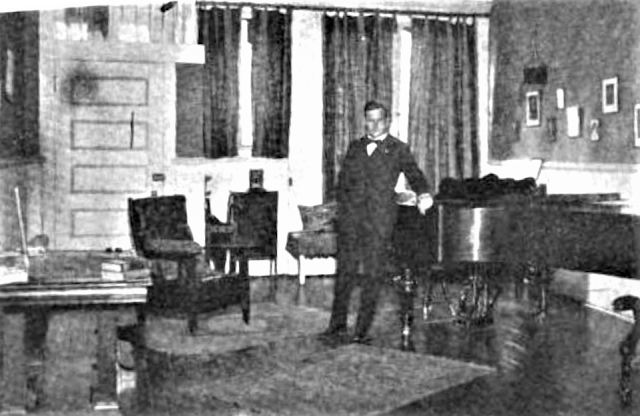 Lambert Murphy poses next to his grand piano in his upper floor studio.  Musical Courier, January 8, 1920 (copyright expired)
It was most likely the Burritts who installed the striking Art Moderne style areaway fencing that still stands guard. 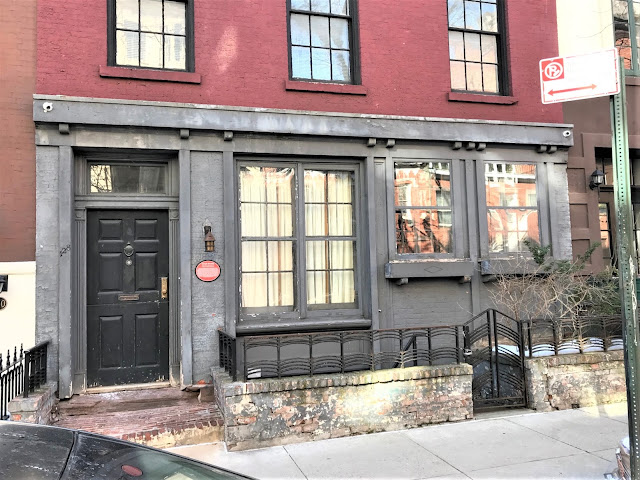 The house continued to see artistic and musical residents, like soprano Katherine Crocco, here in the 1930's; and actor William Eauter and his wife, radio commentator Bessie Beauty, in the 1940's.
In 1953 No. 128 became home to Lincoln and Fidelma Kirstein.  It was a gift from Lincoln's mother, Rose Stein Kirstein, shortly before her death.  A writer, impresario and art connoisseur, Kirstein had started his artistic career early.  While still a student in the 1930's he founded the literary periodical House & Horn and formed the Harvard Society for Contemporary Art.  The latter would form the basis for the Museum of Modern Art.
In 1933 Kirstein had invited George Balanchine to Manhattan.  They founded the School of American Ballet and the New York City Ballet.  He married Fidelma Cadmus (sister of artist Paul Cadmus) in 1941. 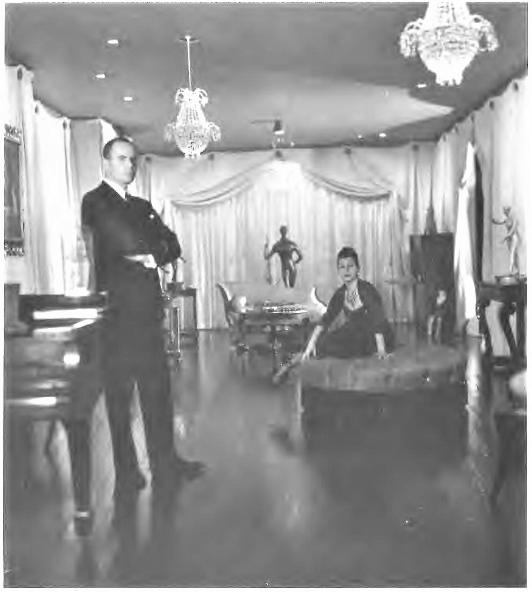 Lincoln and Fedelma Kirstein in their living room.  photograph by Cecil Burton via Intimate Companions by David Leddick
Fedelma was understanding about her husband's bisexuality and throughout the years shared the house he called his "midget mansion" with a few of his long-standing lovers.  Among them were artists Jensen "Jens" Yow, Dan Maloney, and Jose "Pete" Martinez, all of whom at one time or another lived in the former Deming apartment.  Martinez, whom Kirsten met in 1936, was reputedly one of his great loves.
Lincoln Kirstein died in 1996 and the following year playwright George Wolfe purchased the house for the equivalent of $2.85 million today.  He had won a Tony Award three years earlier for directing Angeles in America: Millennium Approaches, and another in 1996 for directing Bring in 'da Noise/Bring in 'da Funk. 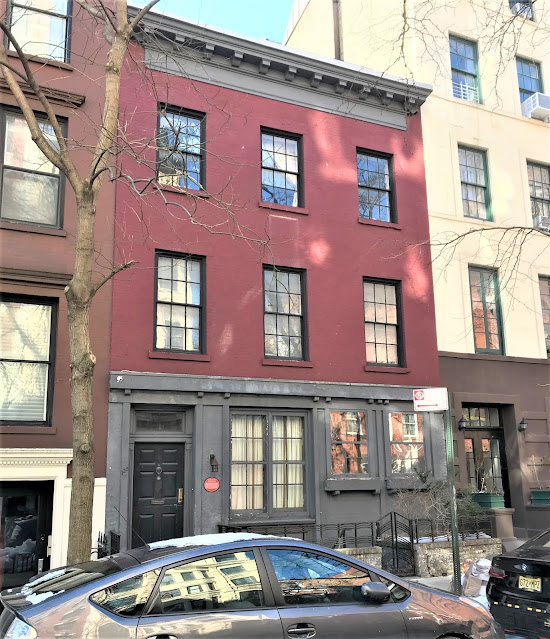 A single family home today, the utterly charming converted carriage factory is an important page in the history of New York art history.
photographs by the author
Posted by Tom Miller at 1:20 AM