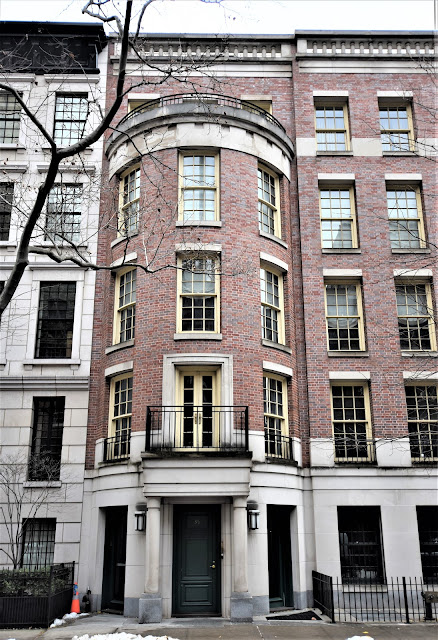 The easternmost house in the row, No. 35, was home to Peter Fenelon Collier and his wife, Catherine, in the 1880's.  Born in Ireland on December 12, 1849, Collier came to America at the age of 17, first settling in Dayton, Ohio.  The young immigrant saved his money for an education and after working in automobile shops for two years, entered St. Mary's Seminary in Cincinnati.
Upon graduation he moved to New York City where he was hired as a book salesman.  Only six months later, using the $300 he had saved, he bought the plates of Father Burke's Lectures from a bankrupt firm, used credit for paper and printing, and published the book.  In a story worthy of Horatio Alger, he cleared the equivalent of nearly $2 million today.
Peter married Katharine Dunne (also a native of Ireland) in 1873.  Their son Robert was born in 1876. 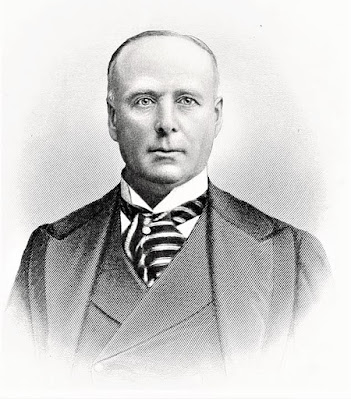 Peter F. Collier, Prominent and Progressive Americans, 1904 (copyright expired)
In April 1888 Peter began publishing Collier's Once a Week.  The weekly magazine was a sensation with a circulation of more than a quarter of a million within four years.  It was later renamed Collier's Weekly.
The Colliers remained in No. 35 East 63rd Street until about 1896.  At the turn of the century it was home to broker Conde Raguet Thorn and his wife, the former Louise Ackerly Floyd-Jones.  The couple had three children, Edward, born in 1890; Conde Jr., born in 1898; and Katherine Delancey, who was born in 1900.
The Thorn's country estate, Little Unqua in Oyster Bay, Long Island, had been a gift of Louise's father, Senator Edward Floyd-Jones, in 1891.  He had built it in 1861 and it was where Louise was born six years later.
The same year that Katherine was born, widowed Senator Floyd-Jones moved in with the family.  His house in Amityville, Long Island was burned that summer, The Suffolk County News noting, "he narrowly escaped with his life."  Prior to coming to live with the Thorns, according to The New York Times, "he took up residence on property he owned at Amityville, and that was damaged by fire on June 15."  The Suffolk County News was more directly, saying "two weeks [after the first fire] an attempt was made to burn another residence of his...but this was unsuccessful."
On January 23, 1901 Senator Floyd-Jones suffered a fatal heart attack in the 63rd Street house.  The New York Times reported, "Mr. Floyd-Jones was apparently in excellent health on Tuesday night and played cards before retiring.  At 5:30 o'clock yesterday morning he was dead."
The Thorn family left East 63rd Street soon afterward.  It became home to Loring Townsend Hildreth, a partner in the law firm of Cochran, Moore & Hildreth.  His wife was the former Augusta Warner Miller.  He was appointed Consul to Siam in 1902 and later Assistant Corporation Counsel to the City of New York.
Around 1909 Annie W. Gould, the wife of millionaire Charles J. Gould, purchased No. 35 for investment purposes.  She leased it first to Oscar von Reisdorff (while, incidentally, he was undergoing an ugly separation from his wife).  In 1920 she leased the house to A. Musgrave Hyde "for a long term of years," according to the New-York Tribune.  He converted it to a two-family residence.  But greater change was on the horizon.
Annie Gould sold No. 35 to Thomas Watkins in October 1922 for $75,000 (about $1.14 million today).  The Record & Guide reported that he "will rebuild it into an American basement type house from plans by A. Wallace McCrea."  The renovations removed the stoop, lowered the entrance to street level and returned it to a single-family home.  Watkins sold the remodeled residence in December 1923 to Henry (known as Harry) Steward Durand and his wife, the former Mildred Holmes. 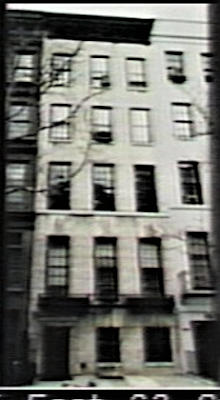 A fuzzy tax photo shows the house as it appeared following the 1923 renovations.  via the NYC Dept of Records & Information Services
The Durands had four children, Marlon, Mildred, Harry, Jr., and Joan.  (Their first child, Marion, had died on June 14, 1920.)  Their country home was in Rye.  Moving into the 63rd Street house with the family was Harry's widowed mother, Emma Weber Durand.  Emma died only a year later, on January 10, 1925.
Durand was a partner in the banking and brokerage firm of Mackay & Co.  The Durands moved among high tiers of society.  Among the recognizable surnames at a dinner on December 23, 1925 were Gould, Kirkland, Gwynne, Herzog and Choate, for instance.
The 1935-36 winter season was an important one in the Durand household.  On November 30 the New York Post reported "Mr. and Mrs. Harry S. Durand...entertained at an old-fashioned reception at their home, 35 East Sixty-third Street, for their debutante daughter, Marion."
On April 9, 1939 Harry Durand died at the Rye estate at the age of 47.  Mildred left the East 63rd house soon after that, moving to No. 1010 Fifth Avenue.
No. 35 East 63rd was purchased by V. S. Velissaratos in 1945.  He converted it to apartments and furnished rooms.  Another renovation completed in 1953 resulted in a total of six apartments, including a duplex.
But major change would come in 2005 when Mitchel Maidman purchased Nos. 35, 37 and 39.  The interiors were gutted, leaving only the exterior walls--which technically meant that the structures were not demolished, but were being remodeled.  The three properties were combined into a single luxury rental apartment building that obeyed the Landmarks Preservation Commission's demand that it must appear to be three distinct buildings.  Nos. 35 and 37 received neo-Georgian facades that left no hint of their 1878 design. 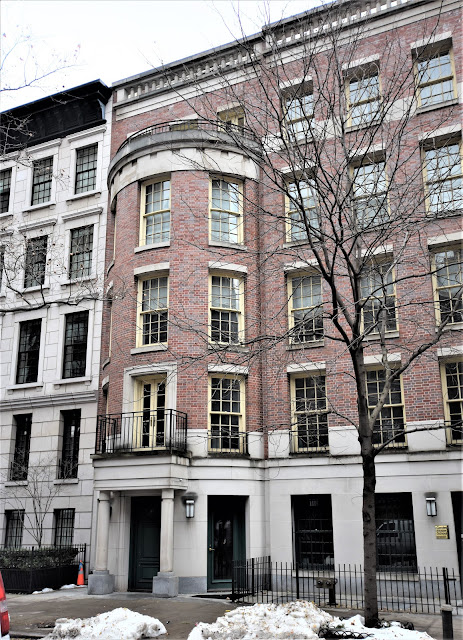 The 21st century makeover successfully pretends to be an early 20th century rowhouse.
In 2017 Caroline Biggs, writing in The New York Times, noted that a five-bedroom, eight-bathroom apartment in No. 35 rented for $60,000 per month.
photographs by the author
Posted by Tom Miller at 1:12 AM