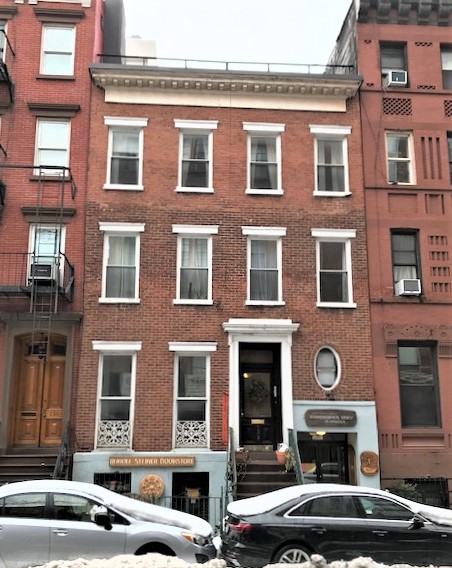 The noticeable change in brick color testifies to the alterations which raised the attic to a full floor.

By the mid-1850's the Vaneeten family lived in the comfortable brick-faced house at No. 102 West 15th Street (renumbered 138 in 1860).  Louis M. Vaneteen was the senior member of the brokerage firm Louis M. Vaneeten & Co. on William Street, and his son August worked as a clerk, quite possibly in his father's firm.  When the family moved out in 1860, an auction sale of their high-end furniture hinted on the elegant interiors of the residence.  Included were a rosewood piano manufactured by Horace Waters (who, incidentally, also wrote hymns and was a collaborator with Stephen Foster), Brussels carpets, and silver flatware and hollowware.  That the area was still developing was evidenced in another item being sold, a "milch cow."

The Greek Revival style Vaneeten house sat upon a high English basement and rose two-and-a-half stories.  The understated framing of the entrance featured "ears" just below its cornice, a motif common in Greek Revival houses, although their origins were actually Egyptian.  The parlor windows, which extended to the floor, were most likely fronted by a cast iron balcony.  Below an oval opening to the right of the entrance, at basement level, was an opening to a horsewalk which led to the rear yard (where that milk cow lived).
The house was purchased by Patrick Brophy and his wife, the former Isabella Ramsey.  Brophy operated a painting business on University Place.  The couple had four children, William J., John A., Mary Ann and Jeanette G.
The family had just moved into their new home when Mary Ann Brophy died just two months before her 17th birthday.  Her funeral was held in the parlor the following afternoon.
It is easy to think of all Irish immigrants as impoverished and living in squalor.  But like many others, the Brophys were well established and financially comfortable.  William eventually worked with his father, and John went into the dry goods business by 1864.
Isabella Brophy died at the age of 46 on August 30, 1865.  Her funeral was held in the house two days later, followed by a requiem mass at the nearby St. Francis Xavier's Church on West 16th Street.  The house was the scene of the funeral of Patrick's brother, Dennis, four years later on July 4, 1869.
At some point the attic of No. 138 West 15th Street was raised to a full floor.  The architect carefully copied the window treatments and either recycled or nearly copied the original Greek Revival cornice.
Following William's marriage he and his wife lived in the West 15th Street house with his father and unmarried sister.  Following Patrick's retirement William took over the business, renaming it W. J. Brophy & Son by late 1880's.
There would be two more funerals in the Brophy residence.  Jeannette, who had never married, died on July 20, 1889, and Patrick died at the age of 80 on April 5, 1893.
Exactly one year later William offered the 15th Street house for sale.  It was purchased by John Leslie, a well-to-do lumber merchant and respected member of the General Society of Mechanics & Tradesmen.  Born in Scotland in 1845, he had entered the lumber business in 1871 and by now operated two stores, one on Prince Street and the other on Thompson Street.  The New York Lumber Trade Journal later recalled, "John Leslie, who started this business, was a retired carpenter who, with an original idea, entered the lumber business simply that he might have something to occupy his mind."
Soon after purchasing No. 138 Leslie initiated changes.  He erected a one-story wooden building in the rear in January 1895, and converted the basement level of the main house for his third lumber store.  He hired Andrew H. Dykes, the teen-aged son of a friend, to manage the new location.
Given Leslie's Scottish roots, it is perhaps surprising that when he looked for a servant in 1898, he specified a German girl.  He noted that she was needed for "general housework [and] to go in the country for summer."
His sharp understanding of business and human nature was evidenced in a help-wanted at in 1902:

Leslie recognized that a boy living with his parents would be more responsible--simply because he would be answerable to his father.  And by requiring that the boy himself write the application letter, he could assess his literacy and attention to detail.
John Leslie died at the age of 72 in June 1917.  His estate retained ownership of the 15th Street house for years and the business was renamed the Dykes Lumber Co., co-operated by Andrew H. Dykes and Frank Leslie.  The business would remain in the house for decades, eventually becoming one of five locations throughout the city. 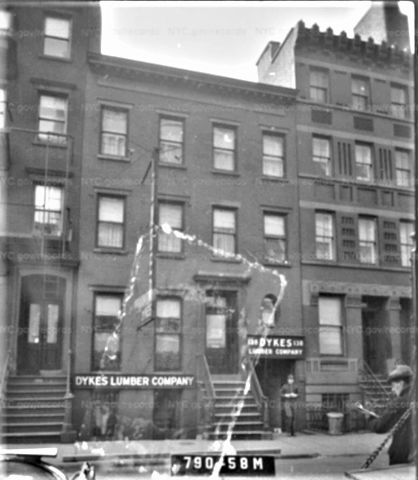 In 1941 the Dykes Lumber Company still operated from the basement level and rear yard.  via the NYC Dept of Records & Information Services.
In 1943 the lumber store was replaced by The Artists Associates.  It opened on June 20 with "an exhibition and sale of selected works in exchange for war bonds and stamps," according to The New York Times.  The space was known as the New Age Gallery by 1945.
In the meantime, the upper floors were leased to multiple tenants.  Among the residents in the early 1950's was artist Nova Hecht, the daughter of painter Zoltan Hecht.  Nova's father was known to the U.S. Government as "a leftist."  Federal officials' attention was focused on No. 138 West 15th Street in 1954 when Nova began a relationship with artist Frederick Taylor, who was a member of the Labour Progressive Party.
In his 2008 book Fred Taylor, Brother in the Shadows, John Virtue notes, "As soon as Fred started seeing Nova in the fall of 1954, FBI director J. Edgar Hoover ordered him placed under surveillance...The FBI staked out the Hecht home at 138 West 15th Street, in New York, noting Fred's comings and goings and mail addressed to him." 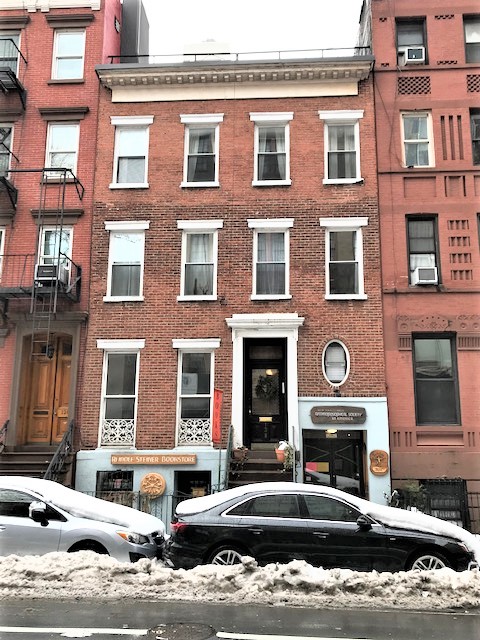 A renovation completed in 1990 resulted in one apartment per floor above the store.  It was most likely at this time that the horsewalk was converted to a second store.
photographs by the author
Posted by Tom Miller at 1:25 AM