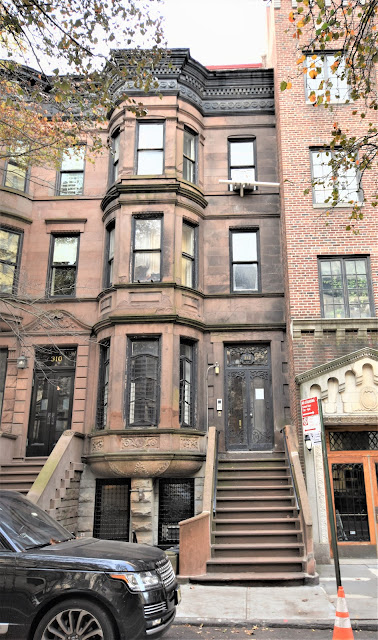 Developers Walker & Lawson hired architect Martin V. B. Ferdon in 1893 to design a row of five houses on the south side of West 91st Street between West End Avenue and Riverside Drive.  Ferndon was responsible for scores of Upper West Side homes, the majority of them in the Renaissance Revival style.  These would follow suit.
The row was designed in an off-balanced A-B-C-B-D arrangement.  The D style house, No. 312, featured a three-story angled bay.  Its rather somber façade was enhanced with decidedly French-inspired parlor entrance grillwork. 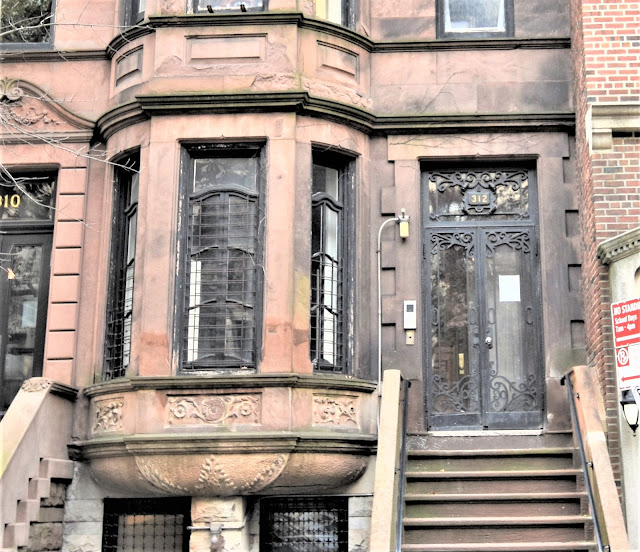 The French casements of the parlor floor replaced the original windows, possibly part of an updating by the Kranich family in 1903.
The row of houses was offered for sale in an 1893 advertisement:

No. 312 was sold to Frederick Kranich and his wife, the former Olga A. Rohe in October that year.  According to The Sun they paid $23,000 for the property, or about $705,000 today.  The couple had three children, Frederick H., Jules G. and Vivienne.  They maintained a summer home in Hohokus, New Jersey.
Kranich was a partner in the piano manufacturing firm of Kranich & Bach.  Kranich's father and grandfather were both piano makers.  In 1864 Helmuth Kranich, Frederick's father, founded the firm with another German immigrant, Jacques Bach.  Three years before purchasing the 91st Street house Frederick and his brother, Alvin, were made directors and officers of the company. 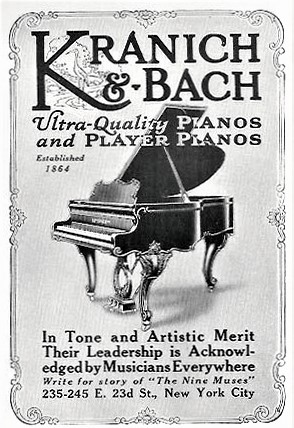 Kranich & Bach was known for its high-end instruments and use of exotic woods.
Following Helmuth Kranich's death in 1902 Frederick became president of Kranich & Bach.  In his 1913 Pianos and Their Makers, Alfred Dolge said, "Frederick Kranich acquired a thorough knowledge of the art under the direct tutelage of his father and has evidently also inherited his father's inventive faculties, as demonstrated by his various improvements and inventions."
In May 1904 Kranich hired architect R. W. Buckley, Jr. to make $3,000 in renovations to the house.  Included in the project, which cost nearly $90,000 in today's money, were the repositioning of interior walls and a one-story addition in the rear.  It was most likely at this time that the parlor windows were replaced with French-inspired casements.
Vivienne's engagement to Edward G. Burghard was announced in the July 6, 1916 issue of The Music Magazine.  The following year, on October 21, 1917, The Sun reported, "The ceremony will take place in St. Patrick's Cathedral" and following the November 1 ceremony, the Columbia Alumni News noted "Burghard and his bride will occupy an apartment at 650 West End Avenue on their return from their honeymoon."
Olga and Frederick were at the summer house on September 10, 1920 when the 57-year old Frederick died from what the New-York Tribune deemed, "a complication of disease."  In reporting his death The Evening World remarked "He made a keen study of piano construction, becoming an expert on piano woods and veneers and development of tonal quality."  His funeral was held in the Fourth Presbyterian Church just down the block from the 91st Street residence, at the corner of West End Avenue. 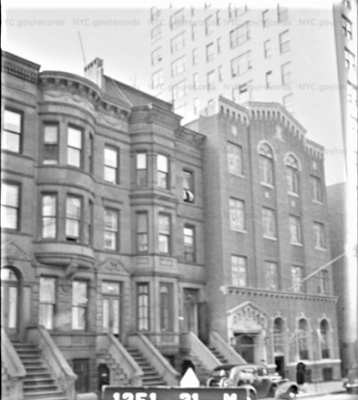 The 1904 one-story addition can be seen in this photo taken around 1941.  via the NYC Dept of Records & Information Services
Olga remained at No. 312 for a few years.  In 1922 she was looking for a new cook, advertising for one who was "experienced, German, Protestant" and describing the position as working for a "small family; private house; country for summer."  The following year she sold her home of four decades for $40,000--equal to about $510,000 today.  She moved permanently to the Hohokus, New Jersey house.  She was in Winter Park, Florida in January 1934 when she died.
It appears that the Kranich house was operated as a rooming house at the time.  In 1936 it was home to Henry H. Dennis, the night clerk at the Hotel Park Royal.  But the residence escaped being converted to apartments until 1971, when an alteration resulted in one apartment per floor.
photographs by the author
Posted by Tom Miller at 1:07 AM