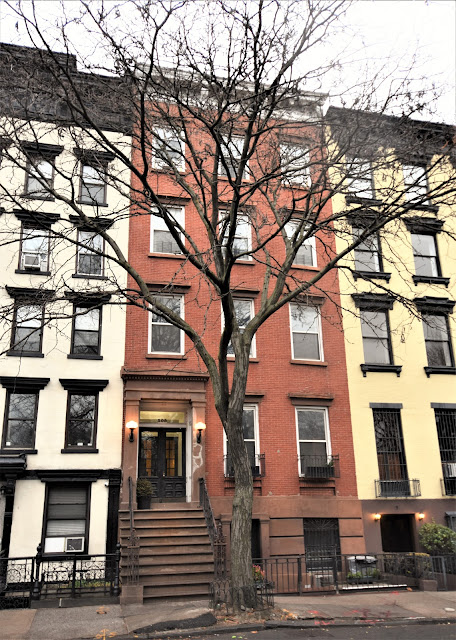 Around 1845 William F. Pinchbeck began construction of his new home at 305 10th Street (the designation "East" would not be applied until around 1868).  It is generally agreed that his architect was Joseph Trench who would design the white marble A. T. Stewart drygoods building at No. 280 Broadway in 1846 and the Odd Fellows' Hall on Grand Street the following year.

Pinchbeck had chosen an elegant neighborhood.  His 25-foot wide property, between Avenues A and B, faced the newly landscaped Tompkins Square.  The architect produced a handsome Greek Revival style home faced in red brick and trimmed in brownstone.  Pinchbeck's affluence was reflected in details like the window lintels which echoed the winged pediment of the entrance.   The house rose three stories about the rusticated English basement, plus a squat attic level.
Pinchbeck was an author, perhaps best known today for his 1805 The Expositor; or Many Mysteries Unravelled.  It was the first book on magic tricks published in America and gave instructions for recreating many illusions created by professional magicians.  He and his wife, Sarah, had a son, William J. Pinchbeck.
The Pinchbecks initially shared the house with another author and his family. Lyman Cobb wrote educational texts and schoolbooks.  His spelling books were widely used in public schools, along with those of Noah Webster.
On June 7, 1847 the New York Herald reviewed the multi-volume The Treasury of Knowledge, noting "The first volume contains...an English Dictionary, with the plurals of nouns, verbal distinctions and other peculiarities, by Lyman Cobb."  The following month the newspaper reviewed his The Evil Tendencies of Corporal Punishment, As a Means of Moral Discipline in Families and Schools.  It was a surprisingly early censure at a time when school masters routinely wielded a stick to the backs of pupils.  The critique said, "We commend it to the attentive perusal of all parents and schoolmasters, and express a hope that it will drive from families and schools the rod, which, in the words of the author, 'debases and degrades our youth.'"
Living with Cobb and his wife, the former Harriet Chambers, was their son, Lyman, Jr.  He would eventually become a minister, but while living in the Pinchbeck house he seems to have struggled to find himself.  In 1850 he was the "general agent for the sale of Dr. D. J. Cobb's Vegetable Family Medicines and Prepared Herbs."  But by the spring of 1852 he had purchased a large Yonkers house on the Hudson River which he converted to a girls' boarding school.  His advertisement on April 10 that year said in part:

Boarding School for Young Misses--Number limited to ten.  For misses under fourteen years of age only...Terms for board and instruction in the English branches, together with French and Drawing, $80 per term of five months--half payments in advance.  Music and Painting, Books and Stationery extra...For further particulars apply to Lyman Cobb, Jr., No. 305 10th-st.

Harriet and Lyman Cobb, Sr. moved to Third Avenue in 1853, and Lyman Jr. now listed his address permanently as Yonkers.
Sarah Pinchbeck's widowed mother moved in with the family.  The elderly woman suffered what the New York Herald called "a long and tedious illness.  She died here at the age of 79 on February 8, 1858 and her funeral was held in the parlor two days later.
In September 1868 The Record & Guide reported that William Pinchbeck had purchased a "first class house" on 52nd Street just west of Fifth Avenue.  He sold the East 10th Street house to Magdalena Escher the following month for $17,000--about $315,000 today.
Escher leased the house to real estate agent Louis Fromme and his wife.  The couple, who had a son, Jacob, took in a boarder.  It appears the first was Dr. Charles W. Betzel, followed by another German physician in 1870, George Lindermeyer.  On April 3, 1873 an advertisement in the New York Herald read:

A furnished parlor and bedroom to let on the first floor; a doctor occupied the rooms for three years.  Inquire of Mrs. Fromme, 305 East Tenth street.

The rooms were occupied by Dr. James J. Friedrich in the mid-1870's, by which time Jacob was attending Columbia College.  As the decade drew to an end the Frommes were taking in more than one boarder.  One of them, Louise Stahl, would garner national press attention.
When Louise took her rooms she explained she was the widow of Hermann Stahl.  Her marriage to John William Adrianus De Vietter took place in her rooms here on May 6, 1877.  But it was by no means a normal wedding.  The groom lived in Rotterdam, Holland and, according to The Sun, "he intended that Louise Stahl should be his wife, and in order to be relieved from the fatigue of a sea voyage he sent William Margat Pauer, his attorney, to this city to appear as groom for him."  A minister performed the ceremony and Pauer, standing in as proxy, answered the vows for De Vietter.
Louise then sailed to the Netherlands.  The New York Herald reported "it is fair to infer the union was not a happy one, for within three months after her arrival in Rotterdam Mrs. John William Adrian [sic] Vietter was on her way back to this country.  The intrigue quickly deepened.
Louise had barely arrived in New York when she was married to Frederick Sahlfeld on December 6, 1877.  Louise represented herself as the widow of John De Vietter.  When her story began to fall apart in the spring of 1879, investigators discovered that not only was De Vietter quite alive, but so was Louise's first husband, Hermann Stahl.
On July 5, 1882 Magdalena Escher sold the house to two of the boarders, George Zuckschwerdt and his wife Mary.  They paid the equivalent of $464,000 today.  In April 1887 Zuckschwerdt hired architect E. W. Greis to make renovations to the house.  The attic floor was raised to a full story capped by an Italianate style cornice.  Modern newels and stoop railings were installed, and it was probably at this time that the parlor windows were shortened. 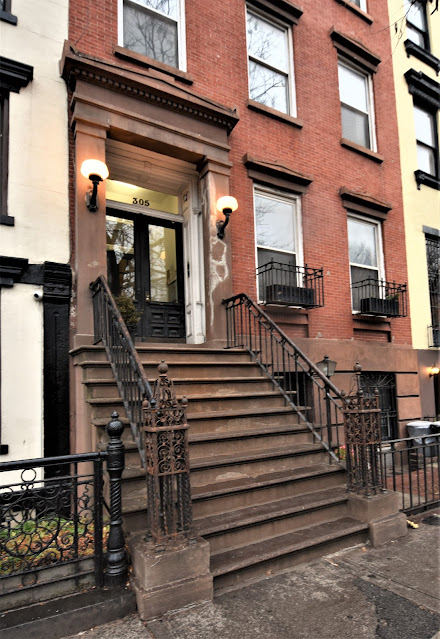 The iron newels were the latest in style.  Brick infill testifies to the shortened parlor windows.
The Zuckschwerdts sold No. 305 the following year to William H. A. Rubino.  The improvements had paid off, garnering a sale price of $25,000, or about $693,000 in today's money.  Born in Germany in 1840, Rubino was a partner in the wholesale wine and liquor business, Rubino & Schwartz.  He and his wife, Charlotte, had three daughters and four sons.
Their home was was the scene of the funeral of William's brother, Frederick H. Rubino, two years later.  Frederick had moved from New York city to Yonkers around the first of July 1890.   Within two weeks he contracted pneumonia and died in his new residence on July 12.  His body was brought to the West 10th Street house where his funeral was held on July 16.
A much more joyous event took place in the parlor on October 16, 1895 when daughter Elizabeth Anna was married to William C. Martin.
The Rubinos moved to Brooklyn in 1903, selling the East 10th Street house to Dr. Nicol M. Mandl.  The well-to-do physician owned an automobile in 1910 when the State of New York enacted a law requiring that vehicles be registered as of August 1.  Automobile Topics reported on July 16 that "men of prominence...seem to have a preference for some particular set of numerals...The greatest demand up to date has been for low numbers."  The lowest possible, No. 1, was assigned to Dr. Mandl.
Mandl retained possession of the property until 1920 when he sold it to another well-known German physician, Philip Jager.  Jager had graduated from the Eclectic Medical College in 1899 and was a lecturer at the Post-Graduate Hospital.  By now the Tompkins Square neighborhood was filled with needy immigrants and Dr. Jager offered his services for free to their children.
Jager became ill in the fall of 1925, and died at the age of 51 on November 16.  Three days later The New York Times reported "More than a thousand friends gathered at 305 East Tenth Street, home of the late Dr. Philip Jager, yesterday afternoon, where funeral services were held for that popular east side physician."  The article noted "During the last five years he had prescribed for more than 200 school children each week, without fee."
An alteration completed in 1933 resulted in rented rooms.  Among the tenants in 1932 was Army Private David Weishar, who became a hero that summer.  In its July 1 issue the United States Army Recruiting News reported "Further proof that machine gunners are heroes in peace as well as in war is contained in a letter recently received by the Adjutant General of the Army concerning Private David Weishar."
The letter, from a Salt Lake City woman, told of an recent incident when she left her three-year old daughter in the car while she ran into a drugstore.  The toddler got out of the car and started across the street.  "Too late, I saw a car coming at a great speed, and thought that the end of my baby had come.  A soldier, who after much coaxing, gave his name, happened to be on the corner, ran out at the risk of his life, snatched my child from the path of the car, which continued without slowing down."  The woman offered Wishar a reward, which he refused. 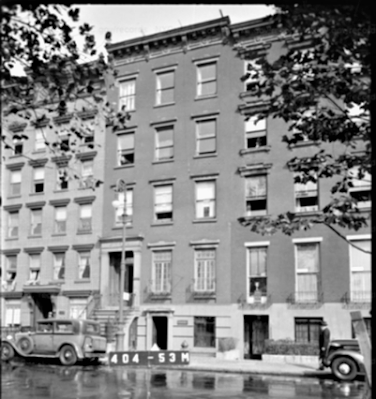 The house in 1941 looked little different that today.  NYC Dept of Records & Information Services.
Another tenant, Minnie Gartein, lived here for several years from the mid-1930's into the 1940's.  She was annually listed on the Government's list of voters for the Communist Party of the United States. 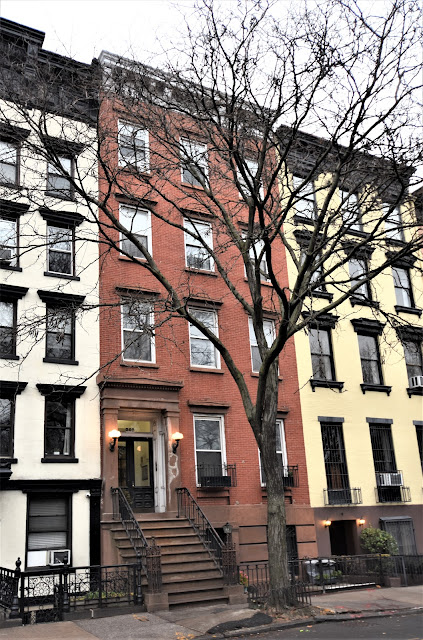 An alteration in 1987 resulted in five residential units.  Overall, the exterior of the handsome house is essentially unchanged since the alterations of 1887.
photographs by the author
Posted by Tom Miller at 1:13 AM