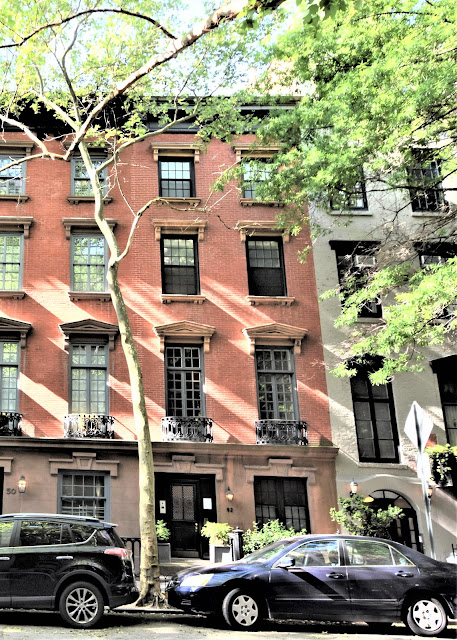 In 1853 businessman and inventor Thaddeus Hyatt purchased a parcel of land from Trinity Church on the south side of Morton Street, between Hudson and Bedford Streets.  The following year he completed construction on four especially handsome brick and brownstone homes stretching from No. 46 through 52.

Their Anglo-Italianate design forewent the tall brownstone stoops seen throughout the city.  Instead, the entrances were within a brownstone base.  The second, or parlor floors, boasted elegant French windows fronted by cast iron balconettes and classical stone pediments.  The openings of the upper floors wore bracketed cornices, while the sills sat upon unusual paired corbels.  Hyatt advertised the "first class basement Houses" for sale with $3,000 down and "the balance on favorable terms."
No. 52 was purchased by Dr. Russell Thatcher Trall.  Born in Connecticut in 1812, he had earned his medical degree from Albany Medical College in 1844.  By now he was well known as the head of the Hydropathic and Hygienic Institute at No. 15 Laight Street--a combination hospital, medical school and "water-cure" establishment, and as the founder and president of the New-York Vegetarian Society.
His water-cure theories were based on the fact that the human  body is composed mostly of water.  Patients immersed in the various cold water treatments--"plunging baths," "sitting baths," and "head baths" among them--would have impurities flushed out of their bodies.
Trall apparently purchased the Morton Street house as an investment, for he continued using the Laight Street address as his residence.  He first leased No. 52 to William J. Wilcox, whose lard business, William J. Wilcox & Co., had two locations on West Street.  He was, as well, secretary of the Knickerbocker Ice Company.  He and his wife, Mary, had a daughter, Rena.
When the Wilcox family left in 1857 Trall considered selling the property.  He placed an advertisement in the New-York Daily Tribune that read:

To Let--House No. 52 Morton-st., near Hudson; well arranged for a select private Boarding House; partly furnished; will be sold at a bargain.  Inquire of Dr. Trall, No. 15 Laight-st.

Interestingly, he leased it to an associate, Charles H. Shepard.  Born on September 28, 1825, Shepard was a member of the firm of Fowler & Wells, which had published Trall's cookbook.   He opened the New-York Kinesipathic Institute in the Morton Street house, which like Trall's facility, offered water cures.
Shepard and his wife had six sons and one daughter.  Later The Phrenological Journal said "He traveled abroad extensively to familiarize himself with the working of the Turkish Bath in other countries, and made it his life work to demonstrate to his countrymen the advantages of the Turkish Bath in America."
Shepard's wife was highly involved in the operation.  An advertisement in the New-York Daily Tribune on May 16, 1860 read:

At this establishment Invalids can have the advantage of Kinesipathy, or Swedish Movement Cure, combined with all necessary Water-Cure appliances.  Mrs. C. H. Shepard, M.D., assists in the treatment of ladies.  Our success during the past year has been highly gratifying.

It may be that the house became too confining for Shepard's growing business, or, possibly, the neighbors within the upscale homes along the block protested against the presence of the institute.  For whichever reason Shepard moved his Kinesipathic Institute to Brooklyn Heights in September 1861.  His announcement explained "Dr. Shepard hopes by his enlarged facilities for the treatment of disease, and the superior location, to give ample satisfaction."
The Shepards remained in the house for another year, and then, somewhat surprisingly, Dr. Russell T. Trall moved in in 1863.    He and his wife took in two boarders that year, John S. Stryker, a clerk, and policeman John E. Fitzgerald.
It was a short-term arrangement and in 1864 the family of William G. Robinson was living in the house.  Robinson's dry goods business was on Broadway.  Henry Robinson was in the flour business on Whitehall Street, and William, Jr. was a clerk.
Maintaining an upscale household with several adult family members required a domestic staff.  In the spring of 1868 Mrs. Robinson was looking for "A girl as chambermaid and waitress, and to assist in the washing and ironing; must be neat and tide and come well recommended."
The Robinsons remained in the house until 1870 when the family of broker William E. Heiley moved in.  Heiley's wife was apparently more comfortable speaking in her native language than English, for an advertisement in the New York Herald on September 7, 1872 read "Two German Girls wanted--One to cook and assist with washing; the other for chamberwork."
In 1888 No. 52 was purchased by William J. Broderick for $13,000--about $360,000 in today's money.  Living with him were his widowed mother, Catherine, and his sister Celia Ann.  Following Celia's marriage to Patrick Corbett, the newlyweds lived on in the house.
Broderick was a partner with James F. Nearey in the hatters' supply firm of Broderick & Nearey, and the printing firm of Amity Printing Co.  Proud of his native roots, he was an active member of the American-Irish Historical Society.
Catherine Broderick died in the house on February 7, 1895 at the age of 73.  There would be another death in the house eight years later.  Celia died on July 15, 1903 and her funeral was held in St. Joseph's Church on Sixth Avenue three days later.
Although he retained possession of the house, William Broderick left No. 52 in 1911.  He first leased it to A. J. Wallick, and then to Edward Kearney and his wife, Catherine, in 1914.  The Kearney's remained here for several years.
By the late 1920's the house held unofficial apartments.  In 1931 Allard Valentine lived on the third floor.  He and his wife, freelance writer Anita Valentine, were separated but remained close friends.  She often stopped by to clean his apartment for him, and since she was preparing to go to Cape Cod on Saturday June 6, she made certain to "tidy up" the place on Friday.  She arrived at around noon and remained for several hours.
The rear garden of the house backed up to that of No. 12 St. Luke's Place.  That once-refined home was now broken into apartments as well.  Among the tenants there were entrepreneur and inventory Stanley Faithfull and his wife, the former Helen Wyman.  Helen's daughter by a former marriage, Helen Starr Faithful (who went by her middle name) lived with them.   Starr Faithfull had had a trouble past.  She had been repeatedly sexually abused by a relative, Andrew James Peters when she was 11-years old and had shown signs of emotional disturbance as a teen.
Helen's mother did not learn of the abuse until 1927 at which time she engaged an attorney who negotiated a $20,000 settlement in return for keeping the scandal a secret.  It appears, however, that the Faithfulls continued to extort money from Peters and some accounts estimate the total payouts at $80,000.
Starr Faithfull, in the meantime, led an unflattering life.  She habituated speakeasies and cruise ships, where she carried on numerous sexual flings with ship officers.   On at least one occasion she was discovered drunk, naked and beaten in a hotel room.
Between 3:00 and 4:00 on that June afternoon Anita Valentine heard screams from the St. Luke's Place house.  They were coming from the Faithfull's apartment.  She later testified she heard a woman's voice saying "She mustn't do that.  She must stop it."  The shrieks, she said, ended as abruptly as they started, but another woman could be heard talking in a loud voice.  She looked out at the open windows of the Faithfull apartment, but could see nothing.  Nevertheless, the incident so affected her that she made note of it in her diary.
Anita went on with her vacation and it was some time before she read in the newspapers that Starr Faithfull's body had been discovered on a beach on Long Island on Monday morning, June 8.  She was interviewed several times in regard to the matter.  The mystery of Starr Faithfull's death was never solved.  It sparked several novels, including John O'Hara's Butterfield 8.
Noted dancer, teacher, author and spiritualist Joseph Gifford lived here by the mid-1950's.  Born in 1920 in Niagara Falls, he began his career as a member of the Doris Humphrey and Charles Weidman Dance Company.  By now he had formed his own company, the Joseph Gifford Dance Theater, headquartered in his apartment.   He performed within the group, as well.  On April 9, 1959 The Villager reported "The Joseph Gifford Dance Theater, 52 Morton St., appeared on Sunday in a production of Igor Stravinsky's 'L'Histoire Du Soldat' at the Kaufmann Concert Hall, 92nd St. and Lexington Ave...Mr. Gifford himself played the part of the devil."

In May 1960 the house was purchased by Jeanne Denny.  In reporting on the sale The Villager noted it contained eight "non-housekeeping apartments."  The term meant that the apartments had no kitchens.  The article added, "The new owner plans to do extensive rehabilitation by making Class 'A' apartments and a duplex for her occupancy."
That finally came to pass in 1982 when a renovation resulted in a duplex apartment in the basement and first floor level, and one apartment each on the upper floors.  That configuration changed in 1996 when the third and fourth floors were combined to a duplex residence. 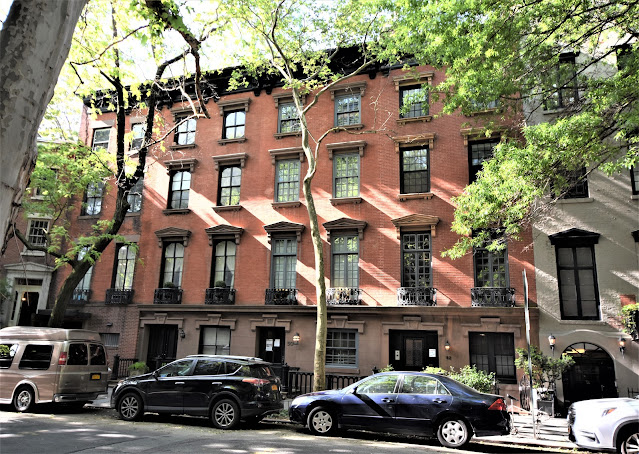 Externally, the Trall house is almost entirely unchanged after more than 165 years.
photographs by the author
Posted by Tom Miller at 1:20 AM