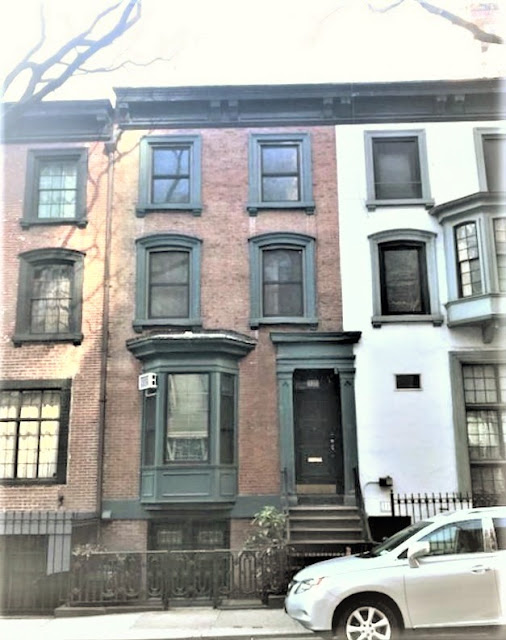 In 1870, three years before he would become head of the piano firm J. & D. Walker, William H. Walker looked to lease his charming brick-faced dwelling in the Rose Hill neighborhood.  His ad on April 4 in The New York Herald offered:

A mix of Greek Revival and Italianate styles, the house was one of a string of six similar homes designed with minor differences.  Handsome Italianate ironwork fencing protected the areaway and continued up the double-wide brownstone stoop which it shared with No. 118.  Paneled pilasters flanked the double doorway and upheld the corniced entablature.  A three-sided oriel at the parlor level no doubt provided a charming, pleasant window seat inside.  Molded architrave frames, slightly arched at the second floor, surrounded the upper openings.


Seven years earlier Josephine Shaw had married railroad executive Charles Russell Lowell III.  Born into a wealthy Massachusetts family, she had lived both in France and Italy.  Her parents urged her and her four siblings to study and to work to improve their communities.

Remarkably, when her husband was called into military service during the Civil War, Josephine refused to leave his side.  She followed his division, aiding wounded soldiers at the front.  On October 19, 1864, a year into their marriage, Josephine was eight-months pregnant.  Yet she stayed on with the Union Army and her husband, now in Virginia.  That morning Lowell was wounded at the Battle of Cedar Creek.  His wounds were such that General Sheridan ordered that he be promoted to brigadier general that day.  On October 20 he died at the age of 29.

The 21-year old widow and mother-to-be returned to Staten Island.  Josephine focused on the rearing of her daughter, Carlotta Russell Lowell, born a month later.  She also turned to public works, working for "the alleviation of human misery," according to historian William Rhinelander Stewart in 1911.

Because she wanted Carlotta to attend Miss Brackett's School in New York City, in 1874 Josephine's father, Francis George Shaw, purchased No. 120 East 30th Street for her.  She continued her tireless work here and in 1876, at the age of 32, she was appointed the first woman commissioner of the New York State Board of charities by Governor Samuel J. Tilden.  She was reappointed by Governor Alonzo B. Cornell in 1881.

Josephine's father died the following year.  The New York Herald reported "To his daughter Josephine Shaw Lowell he gives the house at No. 120 East Thirtieth street, New York."  Although her mother, Sarah Blake Shaw, inherited the Staten Island mansion, she soon opted to rent the house next door to her daughter at No. 118.  In May 1887 the women hired architect H. R. Marshall to connect the two dwellings internally.  His plans called for altering walls and a "door cut through between front halls."

William Rhinelander Stewart commented "there was constant going and coming; the three women, Mrs. Shaw, Mrs. Lowell, and her daughter were one family.  A friend said of them 'I had never before been with people who talked over the affairs of city and State exactly as they would those of their own family, and on Decoration Day, when the flag hung across the doors of those two houses, one knew what it meant to the women within.'"

Josephine's work in state-wide reform organizations did not distract her from causes closer to home.  She was enraged during the 1889 Christmas shopping season as department store proprietors kept counter employees working late with no compensation.  A reader of The Sun wrote to the editor on December 18, saying in part "The movement undertaken by Mrs. C. R. Lowell of 120 East Thirtieth street...for the employees in dry goods and other establishments that keep open late during  the holiday season, is one that should have the support of the public generally...Wishing Mrs. Lowell and her associates 'God speed' in their humane and equitable task."

Her name consistently appeared in newspapers as she lobbied for improvements in the lives of the underprivileged.  On October 18, 1890 the Record & Guide reported that she had originated a petition for "establishing a park and children's playground" in the infamous Hell's Kitchen neighborhood.

Josephine's parlor was the scene of a notable political meeting on June 16, 1893 following the signing of the Russian Extradition Treaty.  Many Americans feared that it threatened the safety of Russian political exiles who had sought refuge in America.  The New York Times reported "A number of well-known ladies and gentlemen of this city who believe that the extradition treaty recently entered into by the United States and Russian was signed because of misunderstanding and misrepresentation, met yesterday afternoon at the home of Mrs. C. R. Lowell, 120 East thirtieth Street."

The Evening World called it "a small but earnest gathering of patriotic men and women" who hoped "to plant the seeds of protest against the new Russian treaty, which is threatening the liberties of more than one good citizens of this republic."  Before the meeting was over the Society for the Abrogation of the Russian Extradition Treaty had been formed.

Josephine was equally intent on women's rights.  On April 23, 1894 The New York Herald reported "Mrs. Charles Russell Lowell, of No. 120 East Thirtieth street, has long figured in the ranks of New York's ardent suffragists, and though she had held a 'parlor meeting' at her house several weeks ago, she again on Saturday bade her friends to partake of her hospitality and listen to the remarks of Mr. Frederick Hollis in opposition to the arguments that have been advanced by the City Woman Suffrage League and the orators of the many drawing room meetings during the last few weeks."

Carlotta followed her mother's lead in civic involvement.  On December 14, 1896 Mayor William Lafayette Strong appointed her a School Inspector.  She was also involved in the New York Kindergarten Association.

Sarah Blake Shaw died at No. 118 in December 1902.  In reporting on her death, The Sun mentioned "Mrs. Shaw was a member of the famous group of Abolitionists who lived in and about Boston.  William Lloyd Garrison, Wendell Phillips and Theodore Parker were among her personal friends."  It added that Josephine "has written extensively on subjects pertaining to charitable and humanitarian work."  Sarah's estate was valued at about $4.58 million in today's money.

Josephine continued her sometimes controversial work.  On November 28, 1903 she held a meeting in the 30th Street house "to arrange for a mass meeting at which protests will be made against the deportation of John Turner, an English labor organizer and social reformer," according to the New York Evening Post.  The Government had labeled Turner "an anarchist."

Josephine was juggling her work for Turner with her determined efforts as part of the Women's Municipal League to have Mayor Seth Low reelected.  On October 18 The New York Herald said Josephine's house "is like one of the old houses of the aristocratic literary set on Beacon or Charles street in Boston.  One almost expects to see the Charles River as he looks out the rear windows.  It is this house that Mrs. Lowell has converted for the time into a campaign bureau...Porters come and go carrying materials of the campaign into downtown tenements or into uptown mansions, wherever there is a possibility of winning a vote."

Josephine Shaw Lowell died on October 12, 1905.  Carlotta immediately left the house she had grown up in and she and her aunt, Ella S. Barlow, leased it within weeks of Josephine's death.  On November 7, 1905 The New York Press reported "when they return from their honeymoon Mr. and Mrs. Bryce Metcalf will reside in No. 120 East Thirtieth street.  Mrs. Metcalf, who was Miss Susie Hall, was married last week."

Unlike Josephine Lowell, Susie Bryce's name appeared in newspapers not for any activism, but for purely social reasons.  On January 24, 1906, for instance, The New York Press announced "Mrs. Bryce Metcalf, No. 120 East Thirtieth street, will be 'at home' to-day."  Society columnists followed the Metcalfs as they moved between their townhouse and country place, Cedarwild, in Ardsley, New York.

Following the Metcalfs in No. 120 in 1917 was Mary Fanton Roberts, "known to the world of letters as editor of 'The Touchstone,' a magazine of art," according to the New-York Tribune.   She moved her editorial office into the house and focused tremendous attention on the rear garden.

Two years later the New-York Tribune said that backyard had been "the same sad little patch of would-be grass that usually forms the groundwork for an overhead laundry line in places where the owners are not the practical dreamers we find Mrs. Roberts to be.  It had a homely, rickety fence alongside, and, worse of all and almost discouraging even to Mrs. Roberts, it backed up directly against a great factory from which pasteboard boxes had a way of crashing down on tender plants and getting lost in the branches of the few trees that then ornamented the grounds."

Landscaping, shrubs and flowering plants, statuary and an Italian birdbath transformed the unattractive space into an urban oasis.  "Already neighbors in that block who have heard of the fame of Mrs. Roberts's gardening...have engaged landscape gardeners to 'fix their yards up' because the spirit of competition has set in," said the article.

George Eghyan was living in the house in 1933 when he was a victim of a high profile swindler.  Edward Jockin convinced him to pay $840 "in the belief that Jockin has smuggled a large quantity of silver bars out of Mexico and had cached them in Germany."  He promised Eghyan a share "of the booty" for helping retrieve it.  Eghyan was not the only victim of the shady proposition.  Former General Motors Corporation head William C. Durant and former New York Police Commissioner Richard E. Enright also lost "substantial sums of money," according to The New York Sun on April 3. 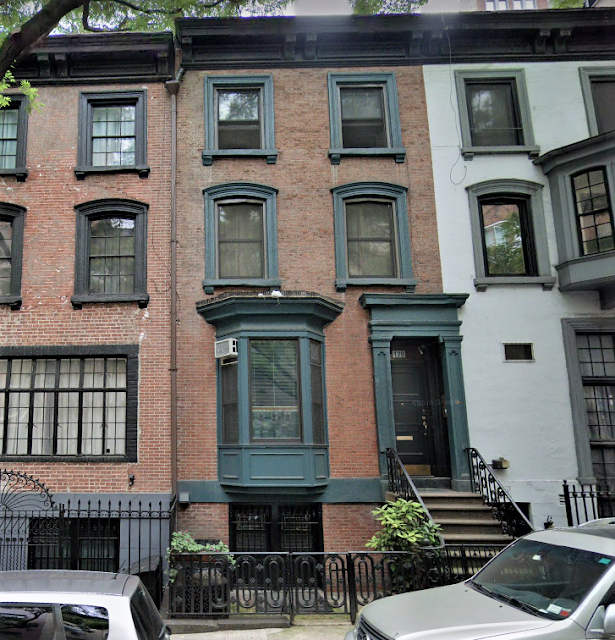 The charming house with its significant history was converted to offices in the basement and first floor in 1972, with one apartment each on the upper floors.  In 1980 the offices were renovated to a duplex apartment.