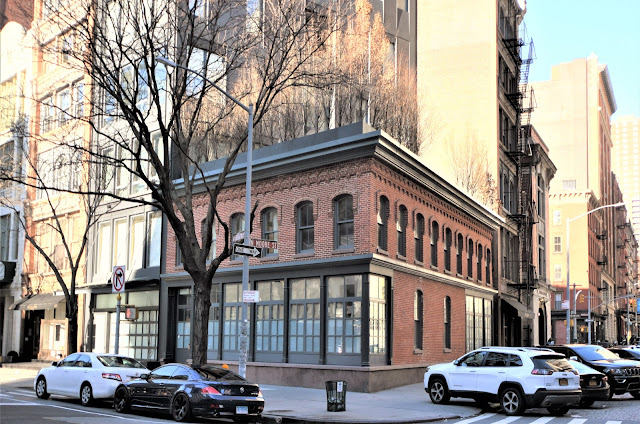 On February 26, 1870 the Record & Guide reported that M. A. Marcy had hired New Jersey-based architect M. H. Scott to design a "two-story brick store" on the site of a coal yard at the corner of North Moore Street and West Broadway.   Completed before the end of the year, Scott had wasted no unnecessary money on the building's decorative elements--yet without sacrificing architectural style.   The segmentally-arched window heads, ribbon-like freize and corbel table below the pressed metal cornice were all executed in brick.  They all reflected the modish neo-Grec style.

There were two cast iron storefronts--one which engulfed the entire West Broadway side and another at the rear on North Moore Street.  (The West Broadway address, No. 132, would be renumbered 232 in 1897.)


In the 1890's Achille Bataille & Co.'s "West Broadway Wire Works" office and showroom were located in the building.  Its factory was located significantly north on Hudson Street, one block south of West 14th Street.  The "wire work" was more substantial that it sounds today.  The firm manufactured the brass and wire railings for "banks, offices, cemeteries," as well as elevator enclosures and folding gates, wire fencing and similar architectural items.

At the turn of the century Italian-born Michael Pascarella operated his wholesale paper operation here.  He shared the building with M. Tortakoff's laundry business, which was most likely located in the rear space.  Pascarella would remain for several years and the large sign erected atop the building in 1907 most likely advertised his business.  It cost $230 to install, or about $6,500 in today's money.

Pascarella lived in Emerson, New Jersey and his successful paper business garnered him a comfortable lifestyle.  In September 1910 he purchased a new automobile and proudly invited three friends to take a test ride.  Joining the party was Pascarella's teen-aged son.

On September 4 New-York Tribune reported that when they were about six miles from home the younger Pascarella "said he knew how to run it and he was allowed to try his hand."  Things did not end well.  "When near the Old Hook Cemetery, between Westwood and Emerson, something went wrong with the steering gear."  The boy ran his father's new car off the road and up a steep embankment where it then "turned turtle."

The newspaper said "The five occupants were made prisoners under the car, but all miraculously escaped injury."  They were rescured by men in a "passing machine."  The Tribune ended saying "The new car is now in a Hackensack garage, a wreck." 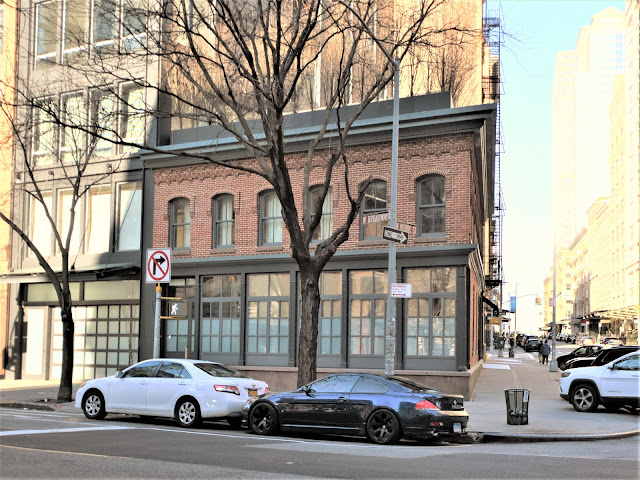 In 1911 ex-City Chamberlain Charles H. Hyde was facing a charge of swindling a client.  Israel Tilden, a law student and clerk, applied for a change of venue, claiming that Hyde was so hated locally that he could not receive a fair trial.  To support his application Tilden presented the court with an affidavit alleging that local businessmen had disparaged Hyde, assumed he was guilty, and called him unflattering names.
The problem for Tilden and his client was that at least a dozen of the men learned of the affidavit and told reporters they had never made the remarks attributed to them.  Among them was Michael Pascarella.

Tilden had reported that Pascarella had said "My opinion is that he [Hyde] is no better than the rest and ought to be convicted."  But Pascarella told the assistant district attorney that he had never met Tilden nor made the statement.  The Sun added that he "says that he cannot read English and never read anything about Hyde or the 'others' in any newspaper."

The Pascarella paper business was gone by the onset of the Great Depression.  A restaurant moved into both levels in 1931, followed by a fish processing and packing factory in 1942.  At mid-century the building held a single store along with storage space on the first floor, with an office and more storage upstairs.  In 1952 the building next door at No. 230 was demolished and would remain a parking lot for years.


Much had changed in the Tribeca neighborhood by the last decade of the 20th century.  The little corner building was home to One Dream theater by 1991 and it would remain in the space for years. 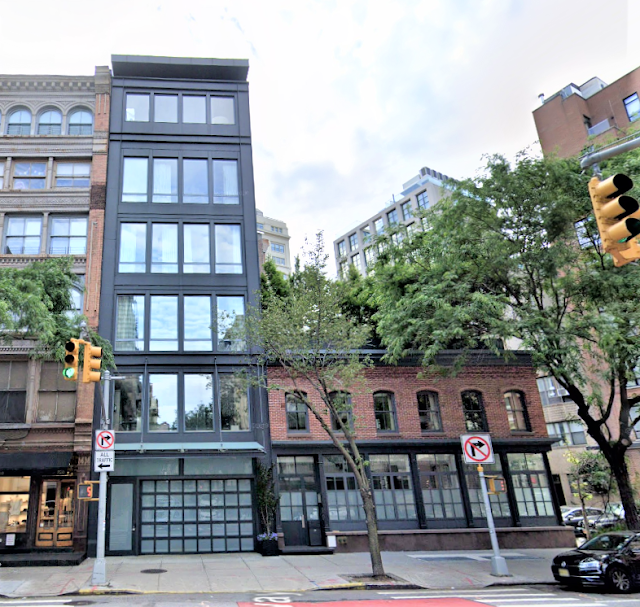 Then major change came in 2009 when construction started on a six-story structure next door which incorporated No. 232.  Completed in 2010, the combined buildings now form a sumptuous single family residence.

photographs by the author
Posted by Tom Miller at 1:33 AM