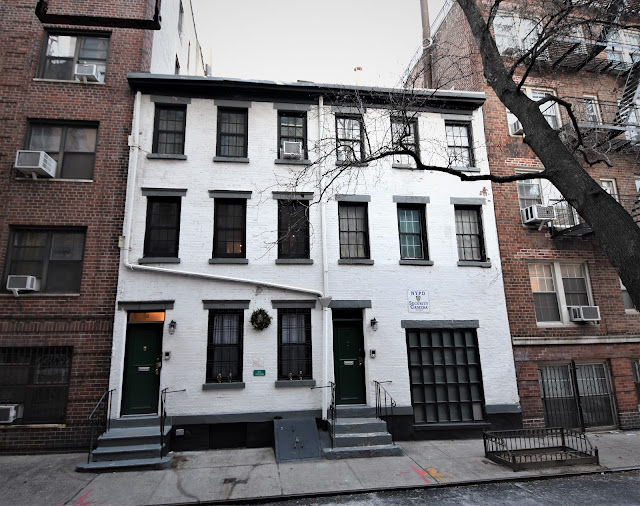 In the 17th century "partially freed" Black slaves were permitted to own property far north of New Amsterdam around a brook the Algonquins called Mannette--variously translated as "Spirit Water" or "Demon Water."  The Dutch interpretation was Mintje Kill, or "little stream," which eventually became "Minetta."

The stream bank was used as a pathway, which became known in the 18th century as "the Negroe's causeway."   After the brook was covered over in the 1820's, the well-trodden path became Minetta Lane from MacDougal Street, turning into Minetta Street and curving towards Bleecker--following the old stream's course.  Following the abolishment of slavery in New York in 1827 the majority of the city's large Black population gathered in the area.  By the 1840's little curvy Minetta Street was lined with humble houses.

Among them were three brick-faced Greek Revival homes erected by Abraham Van Nest around 1847.  Van Nest was the president of the Greenwich Savings Bank, a prominent merchant and a leader in church and city affairs.  The Van Nest family occupied the impressive 18th century estate built by Sir Peter Warren at Bleecker and Charles Streets.

The houses, Nos. 10 through 14 Minetta Street, were three stories tall above three-stepped stoops.  Had the 50-foot plot been in an upscale neighborhood, Van Nest most likely would have allowed for only two houses.  A width of just over 16 feet each would do for this location.


In the mid-1850's No. 12 was home to Samuel B. Totten, a butcher who volunteered at Guardian Engine Company No. 29 on Amos Street (later West 10th Street).  He, like many of the original residents in the years following the Civil War, moved northward.  Emancipated slaves who migrated from the South added to the Black population, earning the neighborhood the nickname "Little Africa."   They shared the 300-foot long street with impoverished Irish immigrants, a group which was also the target of extreme prejudice.

One such family was that of Patrick and Rose T. Reilley, who followed Totten at No. 12.  Their home was the scene of the funeral of their one-year old son, John Francis, on September 14, 1869.

No. 14 was home to several tenants in 1872.  Quite possibly newly-arrived to the city, three of them were looking for work that year.  From the wording of an ad on September 15, they each lived in a single room.  "14 Minetta St., Third floor, back room--A respectable colored woman wishes a few gentlemen's or families' washing."

By 1876 Minetta Street had become dangerous and squalid.  Both No. 12 and 14 were sold by Silas M. Stilwell, Jr. to John M. Pinkney in June that year as part of a bundle of more than 50 other properties, most of them in wretched neighborhoods like the Five Points.  Stilwell was a partner in the law firm of Stilwell, Gardiner & Stilwell.  Pinkney paid a total of $20,000 for the group--about $483,000 today.

Among the tenants of No. 12 in 1889 were 38-year old James Hobson and his wife.  He worked as a longshoreman on the National Steamship Line Pier on the Hudson River, as did his 30-year old unmarried neighbor across the street at No. 15, Gilbert Farmer.  There were 200 longshoreman who worked on the pier unloading and loading vessels, only eight of whom were Black, including Hobson and Farmer.

On the afternoon of December 7 the Holland docked and the crew began work on unloading her.  The Brooklyn Daily Eagle reported "Upstairs eight colored men were rolling cotton bales and three white men directing operations."  An elevator boy discovered a fire "blazing up among the cotton."  The fire spread throughout the massive pier in seconds.  "It all happened in a few moments, long though it takes to tell it," said the newspaper.

Laximia Lewis lived at No. 12 in 1897 when she fell in love with the wrong man.  The 25-year-old expected her boyfriend, Frank Smith, to be faithful.  But she discovered that was not the case.  At around 10:00 on the cold night of February 25 she caught him with another woman on Sixth Avenue near Carmine Street.
The Evening Telegram reported "A colored woman was seen stealthily sneaking behind a man and woman of the same hue.  Suddenly she pranced in front of the man, and striking him in the face with her fist, screamed:--'Yo' deceitful man!  I'll teach you' to trifle with my affections!' and she let out again with her fists, finding a resting spot on his nose."

The other woman screamed and ran away.  But Laximia had merely enraged Smith.  "He quickly delved down in his hip pocked and, producing his native weapon of warfare, a razor, began to carve the belligerent Amazon's countenance."  Laximia screamed "Murder!" and drew the attention of the nearby Policeman Berow.  Both were locked up overnight and the following morning Laximia refused to press charges.  The Daily Eagle summed it all up saying "A keen-edged razor in the hands of an agile colored man served to subdue the jealous frenzy of a woman last night, and as a consequence she will carry a bad looking scar down the side of her left cheek for the rest of her days."

The degraded condition of Minetta Street was evidenced in 1907 when No. 14 was deemed by city inspectors "unfit for human habitation" and ordered vacated.   In 1916 the city proposed a solution to the overall horrific conditions.  On December 10 The Sun ran the headline "Minetta Street, Tough, Crooked And Dilapidated, To Be Wiped Out Under Civic Betterment Plan."  The sub-headline called Minetta Street the "worse section in Old Greenwich Village" and the "home of disreputable characters and [a] trouble centre for more than half a century."  The article noted that originally it was a peaceful, respectable street but, "in time, the best people having gone away, even the honest negro refused finally to live there and gave way to his degraded brethren."

The proposal was to simply do away with Minetta Street and replace it with a new roadway running the opposite way, from Sixth Avenue to the corner of Bleecker and MacDougal Streets.  "Of course the life of the old street depends on whether the Board of Estimate is willing to spend $688,000 on the improvements," said The Sun.  Apparently it was not; for the project never got off the ground.


It was not demolition, but demographics that changed Minetta Street.  Greenwich Village was already the epicenter of Manhattan's arts community and the little winding street with its quaint (albeit abused) buildings fit perfectly into the bohemian lifestyle.  On February 7, 1920 the New-York Tribune reported that Anthony W. Watson had sold No. 14, adding "this is one of the houses which are going to be remodeled in the section to be known as the 'Latin Quarter of America.'"


In 1924 architect Arthur C. Holden was hired to remodel both No. 12 and 14 into two-family homes.  Where impoverished families had crowded into squalid rooms, artists and writers would soon live.
In 1939 lyricist and author John Treville Latouche moved into his five-room apartment at No. 12.  While here he wrote the lyrics for "Taking a Chance on Love" for the musical Cabin in the Sky.  He was interviewed in what Collier's magazine called "his bizarre Greenwich Village apartment" that year.  Latouche shared the apartment with his writer-editor friend Robert Faulkner, but his residency here would be short-lived.  Latouche married Theodora Griffis on October 30, 1940 and moved on.

By 1949 Margaret Brownson Clark was living at No. 12.  Known professionally as Peggy Clark, she had attended Smith College and the Yale School of Fine Arts where she studied scenic design and lighting.


A pioneer in making lighting design a profession on Broadway, she would be elected president of the United States Scenic Artists in 1968.  Peggy Clark remained at No. 12 past the mid-1950's.

The other resident of No. 12 at the time was George Auerbach, a film and stage writer and producer.  He organized the American Creative Theatre in his apartment here.  When he proposed that Saul Bellow transform a novel into a screenplay in 1946, the esteemed writer checked first with his agent, Henry Volkening.   His letter of February 4 said in part:
A man named George Auerbach who heads a group called the American Creative Theatre at 12 Minetta St. wrote this week to ask whether I would be interested in dramatizing The Victim.  I asked Eric Bentley about Auerbach and he reported very favorably.

In the meantime, vocalist and singing coach Donald Gage lived next door at No. 14.  He appeared on stage as well.  By 1957 the house was home to artist Sidnee Livingston, who would remain into the 1970's.  Born in 1909 she studied at New York University and the National Academy of Design.  Among the collectors of her works was Sir John Gielgud who at one point owned the largest private collection. 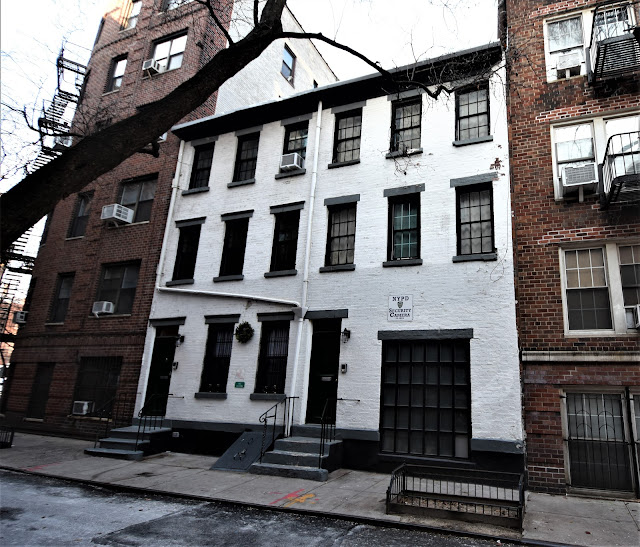 Ballet dancer Wilfred Schuman had moved into the lower portion of No. 12 by 1972 when he was performing on Broadway in The Rothchilds.  In 1993 he purchased it and No. 14.
The aging Schuman began to show signs of alcoholism and dementia in the early years of the 21st century.  One tenant later testified that he was "often drunk by late afternoon" and that he ate nearly nothing "besides cans of tuna fish, which he shared with his cats."
In the other apartment in No. 12 was David Burnett.  He opened a bank account in his landlord's name so the tenants could deposit their monthly checks when he was no longer capable of accepting them.  In 2007 Schuman stopped issuing leases and the tenants lived on a month-to-month basis.
That year he was first hospitalized for "alcoholism, dementia and bleeding of the brain after a fall," according to New York Post journalist Kate Briquelet.  He would be admitted several more times before his death in 2010.
In November 2004 Pari Dulac purchased the two houses from the Schuman estate for $2.75 million.  And she quickly got a troubling surprise.
In August 2010 Jud Parker, unaware that Schuman was deceased, had appeared at one of the apartments in No. 14 asking about him.  He told its tenant, Laurie Dowdeswell, that he held the lease and demanded that she pay $1,500 to sublet it, or vacate.  In 2012 he increased her rent to $2,500.  Just prior to Dulac's purchase of the properties, Lowdeswell and her husband had moved out.
A week after taking title, Dulac discovered that Parker had a 50-year lease on his apartment in No. 14 at $10 a month rent.  The 47-year old Parker insisted that the lease was a "gift" for taking care of the old man.  Dulac sued, claiming Parker "manipulated Schuman into signing the lease or forged his signature." 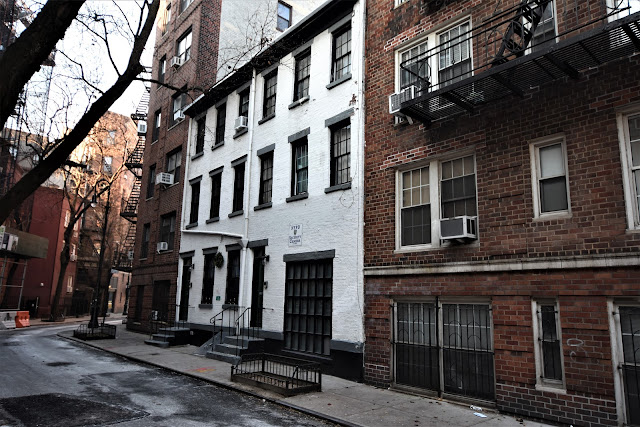