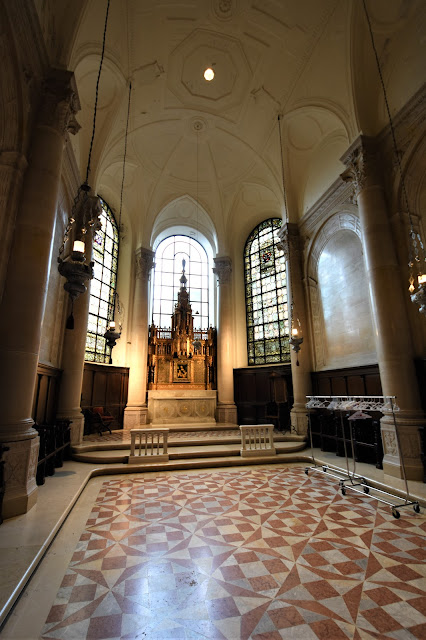 Sarah Swan Whiting, known affectionately as Sallie, was the daughter of Augustus and Sarah Whiting (nee Swan).  Introduced to society in 1880, The St. Paul Daily Globe said “among her first admirers was young Oliver Belmont…young Belmont became her devoted slave.”

The couple was married two days after Christmas that year but it was an ill-fated match.  Within six months they were divorced.  On September 1, 1881 Sarah’s baby, Natica Caroline Belmont, was born.


In 1889 Sarah married George Lockhart Rives, whose first wife, Caroline, had died two years earlier.  A lawyer, politician and author, Rives had just completed his term as Assistant Secretary of State under President Grover Cleveland.
In 1912 the massively ambitious project of constructing an Episcopal cathedral on Morningside Heights had been going on for two decades.  Socialites throughout Manhattan hosted teas, receptions and benefits to raise money for the project. Sarah Whiting Rives took it a step further.
Augustus Whiting had died in 1873 and his wife in 1894.   Sarah announced her intentions to donate a chapel in memory of her parents to the Cathedral Church of St. John the Divine, the Whiting Memorial Chapel.  It was originally to be erected on the north side of the structure, but there was a change in plans.  On July 13, 1912 the New-York Tribune announced "A change has been made in the location of the Whiting Memorial Chapel, the gift of Mrs. William C. Rives [sic], as part of the Cathedral of St. John the Divine...The place finally decided upon for the structure is the south side, next to the Potter Chapel."  The article said that work had just begun on the foundation and placed the anticipated cost at $100,000--or about $2.67 million in today's month.
There would be another change before long.  A plan to create seven chapels representing "the Seven Tongues," as described ed by The Evening World resulted in a name change.  On November 17, 1913 The Evening Telegram reported "The Whiting Memorial chapel...is named for St. Ambrose, and here the services will be in Italian."
In the meantime, construction was well underway.  Sarah had commissioned Carrere & Hastings (which had designed the Rives's mansion in 1907) to design the chapel.  Ralph Adams Cram, a fierce proponent of the Gothic Revival style, had recently been appointed supervising architect of the cathedral.  It is doubtful that his discussions with Thomas Hastings over the project were always affable.
Hastings designed an Italian Renaissance chapel the lightness and grace of which contrasted sharply with Cram's medieval Gothic ideal.  As the chapel neared completion in May 1913, Hastings addressed the Royal Institute of British Architects.  His comments read like an intentional slap at Cram.  He said in part that "the Renaissance style represents the main line of evolution in the architecture of Greece and Rome...while the Gothic style was an evolutionary incident, an outcome of the evanescent morbid spirit of devotion peculiar to medieval life."
The Architectural Record agreed.  In its August 1914 issue it called the chapel "a noteworthy example of the use of the Renaissance style to express devotional feeling in design."  By the time of its completion, the cost had rise to $150,000; nearly $3.9 million today.  The high-end materials contributed greatly to that figure.
The walls were clad in Rosato marble and the vaulted ceiling, embossed with delicate carving, was of white marble.  The complex floor design was executed in gray Siena and red Verona marble.  The magnificent altar and reredos, atop steps of Cenere marble, were of white alabaster, inset with three gold ornaments (a lamb with a cross flanked by angels swinging incense).
Three large, clear windows allowed light to pour into the space.  At night four antique silver lamps which hung from the ceiling provided lighting.
The chapel was guarded by a superb wrought iron Italian screen.  It was topped by a series of seven gilded and painted scenes from the life of St. Ambrose.  Seven tall candle sticks separated each section and at either end stood an angel.  Beehives, the icon of St. Ambrose the patron saint of beekeepers, appeared discreetly throughout the design.


The chapel was dedicated at 11:00 on April 23, 1914.  By now it served as a memorial not only to Sarah's parents, but to other members of the Rives and Whiting families, including Sarah's daughter Natica, who died in 1908.  Although The New York Times commented that "Only the immediate relatives and a few friends have been invited to attend the ceremony," it was no small affair.  It was officiated by Bishop David Hummell Greer; and assisted by Dean William M. Grosvenor; Rev. Dr. Charles L. Slattery, rector of Grace Church; and Rev. Stanley C. Hughes, rector of Trinity Church in Newport.
The first Italian service was held in the chapel on June 7 that year.  The Churchman reported "The whole service was in Italian, Canon Nelson preaching in this language to a congregation which filled the chapel, and many stood outside unable to gain entrance."
Not surprisingly, the chapel would be the venue of Rives weddings.  On April 11, 1917 Mildred Rives was married to Frederick Marquand Godwin here.  Because her father was too ill to attend, her brother, F. Bayard Rives, gave her away.  The guest list was most impressive.  It included Marshall Orme Wilson and his wife, the former Caroline "Carrie" Astor, who had been close friends with Sarah since childhood; the Henry Marquands; Prince and Princess Troubetskey; the H. McK. Twomblys; and Mrs. Frederick N. Goddard among others.
Only three weeks later F. Bayard Rives's marriage to Helen Hunt was celebrated here.  His best man was his new brother-in-law, Frederick Marquand Godwin.  The New York Herald explained "The marriage had been arranged for early June, but wad advanced as the bridegroom is a member of the Officers' Reserve Corps." 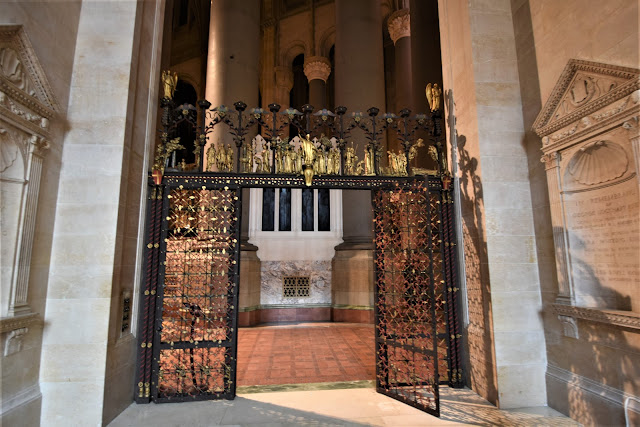 That the family had not necessarily been totally in agreement with the renaming of the chapel in 1913 may be reflected in the fact that press coverage of the engagements and weddings referred to it as the Whiting Memorial Chapel, ignoring any mention of St. Ambrose.
Family weddings continued to be held here.  A niece, Evelyn Rives Smith, was married to Roderic Wellman here on April 5, 1921.  The socially important event was broadly covered in society columns.
In 1923 Sarah Rives replaced two of the clear glass windows with magnificent stained glass panels.  They were dedicated on March 4 by Bishop William T. Manning.  Close inspection reveals that beehives are scattered among the honeycomb patterned sections. 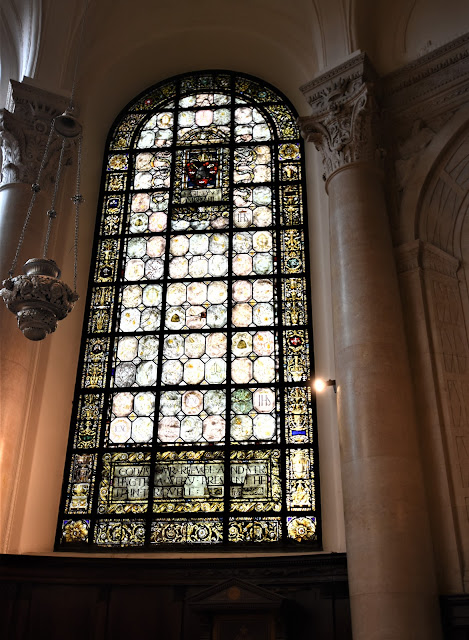 Dr. Robert J. Nevin had been rector of the American Church in Rome until his death in 1906.  He willed to the Cathedral his collection of early Italian art.  On June 21, 1930 the New York Evening Post reported that "Recently some of these interesting pictures have been placed in the Italian Chapel of St. Ambrose, and are now on view."
They were in the company of another handsome gift.  In 1929 Italian Prime Minister Benito Mussolini presented two silver candlesticks to the Italian chapel.  They were still in place in April 1932 when Colonel J. W. Finger gave a lecture on the cathedral.  The Newburgh News noted that he spoke about the St. Ambrose Chapel, saying, "This is exquisite.  The altar is all overlaid with gold.  The Mussolini candlesticks, a gift to the Italians, was [sic] also shown." 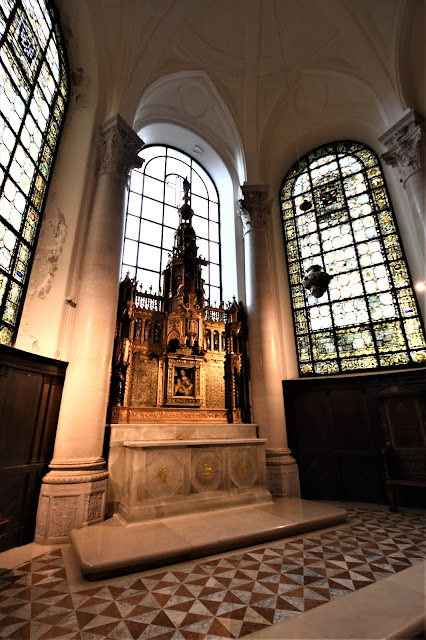 As construction continues on the cathedral around it, the stunning 1914 St. Ambrose Chapel continues to awe visitors.
photographs by the author
many thanks to Cathedral Program Manager Jimmy Newborg and staff member Dana Settles for their time and incalculable help