By the mid-1870's the Schwaner & Amend Brewery operated from several buildings at the southeast corner of 10th Avenue and 57th Street.  In 1878 the company renovated the structure at Nos. 514-516 as an ice house.  But only four years later the entire complex of buildings was sold at auction.

Another brewer, Conrad Stein, purchased the ice house and lot behind that ran through the block to West 56th Street.   Stein had come to the United States with his parents in 1835.  He had partnered with Philip Schaefer in 1864 to form the Stein & Schaefer Brewery; but it was a short-lived venture, ending in 1867.  That same year Stein opened the Conrad Stein Brewery.

He broke up the cube-like proportions with a tripartite design; the sections separated by a stone cornice above the first floor and a limestone course below the sixth.  Four full-length brick piers created three vertical sections, further alleviating the visual weight.

Jose turned for the most part to the neo-Grec style.  The ground floor openings--two windows on either side of the double-doored entrance--were linked by a continuous band of stone which rose and fell to form the lintels.  The motif was carried on at the upper floors in brick.  A brick corbel table upheld the ambitious metal cornice which rose at the center as an overblown arched pediment.  It embraced a cast iron panel that announced the firm's name.

In August 1884 Stein filed plans for "the erection of a stable at No. 517 West Fifty-seventy-st. to cost $25,000," as reported by the New-York Tribune.   (That would be about $660,000 today.)  Directly across the street from the brewery, it would have housed the teams of horses and delivery trucks necessary to delivery barrels of beer not only within Manhattan, but to Brooklyn and New Jersey.

The Hell's Kitchen neighborhood in which the Stein Brewery stood was populated mostly by immigrants, many of them German.  A popular means of spending one's evenings in the late 19th century for German-born residents was the biergarten, an open air space with entertainment, light food and much beer.  The Conrad Stein Brewery operated its own biergarten in the rear property.  The entire venue could, as well, be rented by groups or for special occasions.  Such was the case when an announcement appeared in The Evening World on May 8, 1893:

The following year, on October 24, 1894, the space was used by the Conrad Stein personally, in celebration of the marriage of one of his sons.  The Evening World reported "Brewer Stein's son was married last night and the employees were given a banquet at the Summer garden of the brewery, at Tenth avenue and Fifth-seventh street."  Among those enjoying their employer's generosity was 60-year old Charles Small.  He had been Stein's bookkeeper for twenty years.

At around 11:30 that night Small headed home "perfectly sober," according to co-workers.  But he never made it there.  Just after midnight he was found between the street car tracks only a few blocks away, at Ninth Avenue and 59th Street, nearly opposite Roosevelt Hospital.  Passersby carried him to the sidewalk while someone notified hospital personnel.

The Evening World reported "His skull was fractured, his right arm broken, nose broken, he had two scalp wounds and a number of contusions about the body.  He was covered with mud, and his clothes were wet through.  The house surgeon thought the man must have been lying in the street for full half an hour."

Missing were Small's gold watch and the $25 in cash he had had.  Hell's Kitchen was not a safe place for respectable men with gold watches after nightfall.  The Sun printed the possibility that Small "was struck by a passing car or vehicle" and The Evening World elaborated on that theory.  It wrote that police felt "that the man had been knocked down and trampled by a horse; that he had lain there in the street for a long time, until some members of the rough gang that hangs out in the neighborhood came along and found him; that they had rifled his pockets and left him in the street to be found later."

Small did not recover.  Shortly after his death witness reports came in that turned the story around--creating an even more chilling scenario.  A neighborhood hoodlum had attacked Small, beating him and robbing him of his valuables.  He then dragged his victim to the street car tracks where he knew the horses' hooves would most likely fatally wound his victim.  On October 27 the New-York Tribune wrote "The neighborhood is infested by a crowd of ruffians known as 'The Slaughter-house Gang,' one of whom is believed by the friends of Mr. Small to have robbed and murdered him."

On April 10, 1900 the New-York Tribune reported that "Conrad Stein, a wealthy brewer, died on Friday at his home, No. 327 West Fifty-seventh-st., from heart disease, from which he had suffered for several months...Mr. Stein took a prominent place among the Germans in this city."  It added "A widow and eight children survive him."

Stein's estate was valued at about $5 million, more than 30 times that much in today's dollars.  His wife, Josephine, received the house, "the furniture, statuary, bric-à-brac, pictures, and horses and carriages owned by him, together with the contents of a safe in the house."  The safe contained $400,000 in securities.

Sons Conrad and Alexander inherited the brewery "on the condition that they pay their mother $20 a week during her lifetime," reported the New-York Tribune.  The rest of the estate, after various bequests, was to be divided among the children--"but none of it was to be distributed until the youngest came of age."  So the Stein heirs would have to wait for their inheritances.

In December 1901 the brewery was re-incorporated as Conrad Stein's Sons.  The directors were Alexander, Conrad and their mother.

By the end of 1903 the youngest of the Stein children seems to have reached legal adulthood.  On January 31, 1904 the New-York Tribune reported "The brewery, which was established many years ago by Conrad Stein, has been conducted by his sons, Alexander and Conrad, who have now sold the business to the managers of the Lion Brewery."  Another newspaper said they intended to retire on "their large personal fortunes."

Josephine Schmidt, the wealthy owner of the Lion Brewery, was not interested in the immense stock of beer still housed in the 57th Street building.  The Wine and Spirit Bulletin reported "As the business at the old Stein Brewery was to be discontinued, and a renewal of a $5,000 bond to the Government for storage of beer being imminent within a few days, it was decided to turn the beer into the river by way of [a] private sewer connected with the brewery."

The bulletin sighed, "Just think of 11,000 kegs of good, fresh beer turned loose into the river, gone to regale the finny tribes that people the North river.  Not a drop for poor humanity."  The Wine and Spirit Bulletin was not alone in its laments.

The Stein brothers had tried to keep the beer dumping secret.  But word got out and hundreds of Hell's Kitchen men gathered outside while Government men carefully oversaw the "wild rush of beer dashing itself against waste pipes and sewer walls," as worded by the New-York Tribune.  On January 31, 1904 the newspaper reported "The beer stood in a flood seven and eight inches deep over the cement floors of the eighteen cellars."  It described a "$25,000 flood of three million beers."

The scent of fresh-brewed beer wafted onto the streets and the men could hear the liquid flowing into the sewers.  They pointlessly begged for just a taste.  One man moaned, "Ach!  It's a funeral."

In December that year the property was purchased by Gustav Schock.  Although not a brewer, he was heavily involved in the industry, manufacturing brewers' equipment.   He installed his office in the building and seems to have used just one floor for his own factory (he had been in business since 1870 and temporarily continued at his existing manufacturing locations).

In October 1907 Schock advertised space available in the newly-renovated lofts.  Taking the liberty to call the building "new," he said it was an "absolutely fireproof factory building."  He was charging 21 to 25 cents per square foot.

Among his first tenants was the Telescope Cot Bed Company, which took space that year.  It would remain at least through 1913.   The firm manufactured folding cots that "can be set up in a minute or two, and as quickly taken down," according to ads.  An advertisement in Outing magazine in 1917 boasted that Theodore Roosevelt had taken a Telescope Cot Bed on his "famous African hunting expedition."

The same year R. Plumacher & Sons, "platers and finishers," moved into the building.

Sharing space in No. 514-516 with Schock in 1910 was the newly-organized Geiszler Starting Device Company, makers of starters for gas engines; the Electric Bank Protection Co., the motto of which was "Burglary Protection That Protects;" and The Safety Sanitary Strainers Co., makers of "A Device That Saves Plumbers' Bills."


That year, on June 6, Patrolman McDonough noticed a man climbing over the iron railing in front of the building at around 3:00 in the morning.  He rapped his nightstick on the pavement, the pre-radio method of calling for assistance.  Patrolman Peter Coyle responded.  By now the would-be burglar had dropped to the basement level.

Coyle looked over the railing into the darkness and estimated the drop to be a few feet.  He jumped down.  But the depth was fully 30 feet.  When Lieutenant Mulligan arrived with back-up he heard Coyle groaning in the dark.  He had fractured his right leg and was taken to Flower Hospital.  In the meantime, the thief, Joseph Bouvear, was captured inside the building.

Prohibition put an end to Gustav Schock's business.  Following his death in 1921 his son Robert G. Schock continued to lease space the 57th Street building.  That year the Hinman Engineering Company took space and in 1924 Industrial Management magazine reported "The Fay Co., 514-516 West 57th St., New York, announces its recent organization for the manufacture of Fay Floor Machines which are used in factories and shops for scrubbing sandpapering and refinishing."

In 1926 a renovation was done which created a "motor vehicle repair shop" on the first floor with factory space on the upper floors.  The United States Recording Instruments Corporation and the United States Taximeter Corporation moved in immediately afterward.

A much different sort of tenant took space in 1930 when Robert Schock leased a floor to the Universal Pictures Corporation "for storage purposes," as reported in The New York Sun on May 23.

But throughout the 1930's the tenant list was mainly electrical and motor firms.  The Splitdorf Electrical Co. designed and manufactured racing boat motors.  On January 23, 1932 The New York Sun reported that the firm had introduced its three new "New Elto Motors."  The following year the firm was reorganized as Lawrencelle & Adler. 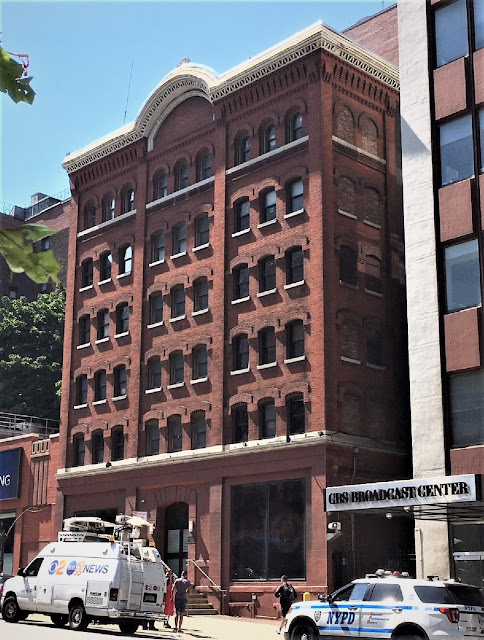 But change was about to come.  In 1941 Audio Devices, Inc. took space, and on August 2, 1946 The New York Sun reported that the Weimet Film Company had purchased the building "for its occupancy."

Weimet scored a coup following World War II when it purchased a large amount of Government surplus photographic supplies.  A page-long advertisement in Popular Photography in May 1949 listed everything from film, lenses, and papers to a "heatless forced-air dryer."

The media-related tenor of the occupants continued when in 1978 the building was renovated to include a "sound studio and accessory offices" on the top floor.   It was home to MPCS Video Industries which offered a "full facility" and referred to the address as the "MPCS Video Center Building." 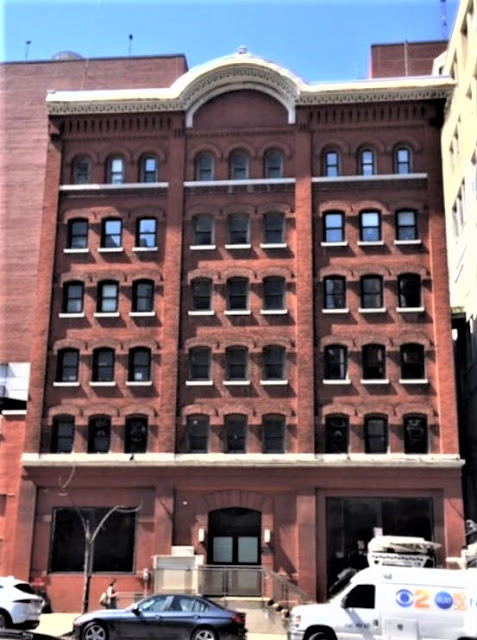 It was joined in 2001 by CBS News which took over the fifth floor.  Workers coming and going today editing the news or recording videos would most likely be stunned to know that their building was once the scene of the dumping of nearly 11,000 kegs of beer, a neighborhood travesty.