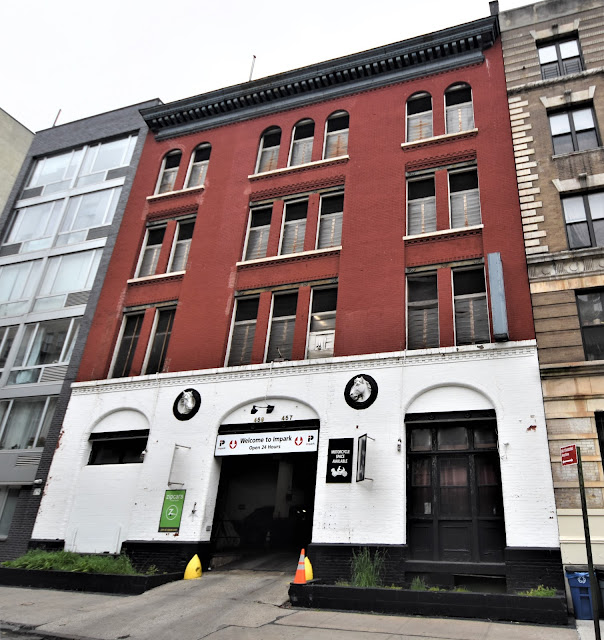 Richard F. Carman's vast real estate holdings in Upper Manhattan in the first half of the 19th century earned the district the name Carmansville.  A wealthy executive with the City Insurance Company on Wall Street, he was among the subscribers of neighbor John James Audubon's costly The Viviparous Quadrupeds of North America, completed in 1848.

Esper, who was the principal in the National Beef Company, soon erected a livery stable on the site.  An 1894 listing described the business simply as "horses."  Well-heeled residents of the Sugar Hill neighborhood boarded their expensive horses here, including trotters bred for sport.  An advertisement in the New York Herald on September 23, 1894 offered Jeanette for sale.  "Will trot a mile, with two in a buggy, in 2:50; can be seen at F. W. Esper's stable."

Business was apparently good, for toward the end of 1895 architect Henri Fouchaux was working on plans for a more substantial structure on the site.  Filed on January 3, 1896, they called for a "four story and basement brick livery stable" to cost $15,000, or about $463,000 in today's dollars.

Completed later that year, Fouchaux's utilitarian structure was both sober and unobtrusive.  Faced entirely in pressed brick, the grouped windows of the upper floors lined up above the three large arched openings at ground level.  Other than the rosette-decorated metal lintels of the second and third floors, the delicate ornamentation was executed in brick.  Above the arched openings of the fourth floor was a pressed metal cornice.

A vivid exception to Esper's frugality in regard to decoration was the pair of exquisitely-sculpted horses' heads on either side of the central carriage bay.  Set within decorative roundels, they identified the structure as a stable.  The unknown sculptor fashioned them as they would appear in full gallop--their manes flowing and nostrils flaring. 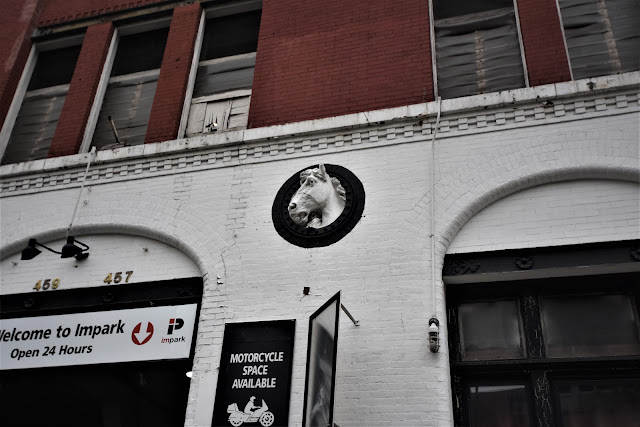 Busy with his meat business, Esper leased the stable to proprietors.  In 1900 Frank J. Hahn signed a five-year, $3,000 lease; and in 1905 Joseph M. Balmford took over the lease at $3,500.  Balmford changed the name of the stable from the F. W. Esper Stable to the Speedway Livery & Boarding Stables.  The name referred to the nearby Harlem River Speedway.

The Harlem River Speedway had been established in 1893 at a time when speedways were cropping up near large cities throughout the East.  Only particular vehicles were allowed to use the roadways—horseback riders and carriages among them.  Small or slow vehicles like sulkies, drays, and bicycles were prohibited.  With no cross streets, they were excellent for carriage races, hence the name.  The Harlem River Speedway ran from West 155th Street to Dyckman Avenue.

1906 was both a joyous and disastrous year for Frederick Esper.  He married Dora Eickwort, a graduate of Hunter College and a teacher in the New York public schools, that year.  But then on July 14 The National Provisioner reported "Frederick W. Esper, a butcher at 1703 Third avenue, New York City, N.Y., has filed a petition in bankruptcy."

Esper managed to retain ownership of the 150th Street stables until July 1909 when he sold it to Frederick Dannemann.   As soon as Joseph M. Balmford's lease expired, he was apparently given his walking orders.

On April 27, 1910 auctioneers Van Tassell & Kearney held the "Auction Sale of Livery Stock--Closing Out of the Speedway Stables, Joseph Balmford, Proprietor."  Included in the sale were a dozen "very serviceable" horses, and "several glass front landaus and various other carriages."  Three days earlier the New York Herald reminisced, "The Speedway Stables was at one time headquarter for many horsemen who drove trotters on the Speedway, David Lamar, Charles Welland and others having kept their flyers there."

Frederick Dannemann and his sons had forward-thinking plans for the building.  The same week the auction was held architect Charles Stegmayer filed plans for alterations, including an upgraded elevator shaft.  It was the first step in transforming the stable into a garage.

The Convent Garage not only provided long-term housing for the vehicles of the neighborhood, but repair services and fueling.  In 1915 the Standard Oil Company of New York listed the garage as among those where its Socony Motor Gasoline was sold.  The advertisement insisted that that fact that the garages sold Socony gasoline "is an indication of their appreciation of quality products."

When patrons upgraded their vehicles, the Convent Garage helped to sell their current cars.  An ad in The Evening Telegram on December 16, 1915 offered a "Stearn's Limousine--13-20 h.p., 1910, in excellent condition," and the following April a "30-50 h.p. Renault touring car, in good condition, cheap," could be seen here.

By the time CH 150 Holdings, LLC purchased the building for $6.3 million from the West 150 Street Operating LLC in 2018, the facade was painted red and white and the garage was operated by Alliance Parking.  The developers quickly renamed the building "The Carriage House" and laid plans to refit it for residential use.  The garage operator was given a month-to-month lease. 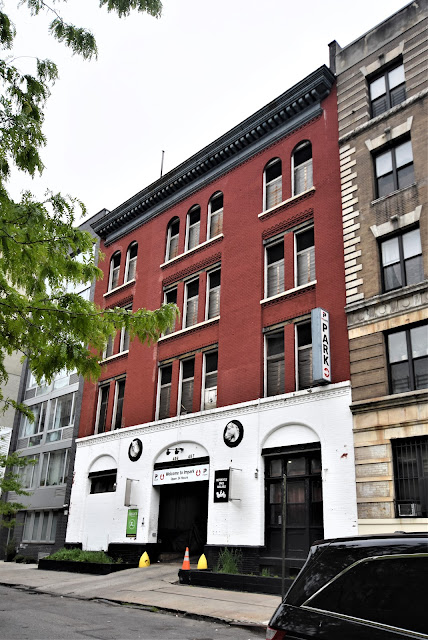 Other than the paint job and the closing off of the western entrance, almost nothing has changed to Frederick Esper's 1896 livery stable.  The building does not have landmark protection.