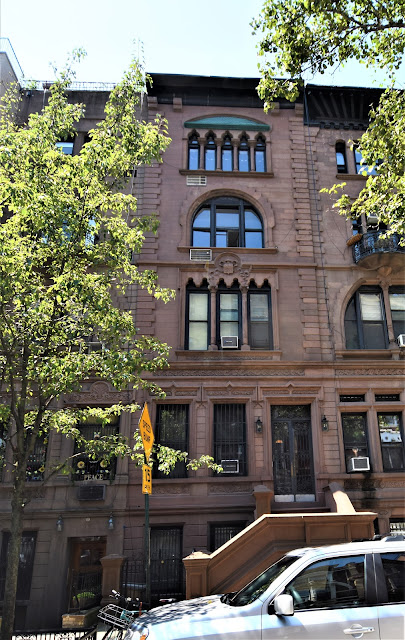 The Record & Guide reported on January 30 that six of the houses would be 16 feet wide and the remaining three would be 19, 18 and 17 feet in width.  As he had done the year before, Rafael Guastavino turned to a blend of the Moorish Revival and Renaissance Revival styles for the row (although the Real Estate Record & Guide preferred to call the style “Spanish Renaissance).  The mirror-image row was designed in a complicated A-B-C-A-D-A-C-B-A configuration. 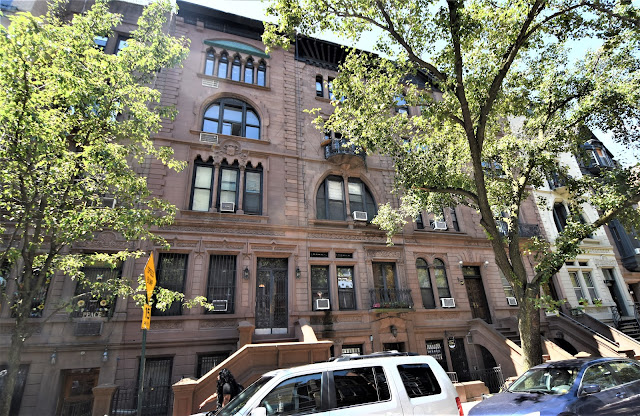 No. 126 was one of the 19-foot-wide houses.  Like its neighbors it rose four stories above the very high English basement.  A dog-legged stoop led to the parlor floor, the rusticated face of which was nearly lost behind the complex treatment of the openings.  Abutting architrave frames formed little Moorish arches between the windows and the entrance.  The grouped openings of the second floor were fronted by two engaged columns under a fringe of Moorish arches--creating the illusion of a recessed arcade, or balcony.  Another exotic arcade graced the topmost floor. 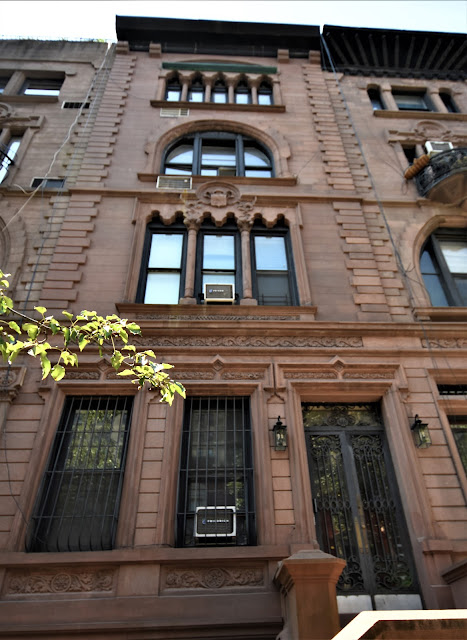 On June 11 1887 the Real Estate Record & Builders' Guide reported that Levy had sold the house "to a private family" for $35,000--just under $1 million today.  The buyer was Albert Lilienthal and his wife, the former Alice Meyer.

Alice decorated her new home in the latest of fashion.  The first floor level was filled with Louis XV, Louis XIV and Louis XI period antiques and reproductions, all in ivory and gold.  Cabinets held her collections of lace fans, Russian and Limoges enamels, and early English and Dutch silver pieces.

The music room followed suit.  There was a Steinway & Sons small grand piano with a white mahogany case, a Steinway upright with a matching case, and a Mason & Hamlin parlor organ, also in white mahogany.  The dining room suite was different, all in antique, hand-carved oak.  Alice's English silverware dated from the Queen Anne and Elizabethan periods and included solid silver coffee and tea sets.

Lilienthal was a partner with his brother Philip in Lilienthal Brothers, described by The Otsego Farmer of Cooperstown, New York years later as "one of the oldest and largest in the hop business in the world."  The article noted "Albert Lilienthal, the well known hop operator and manipulator...brought the firm to its present standing."

Albert quickly involved himself in the developing Upper West Side community.  He was a founder of The West End Club, incorporated in October 1889, the goal of which, according to The New York Times, was "to promote intercourse among members and provide a clubhouse."

His prominence in the hop industry was seen in December 1890 when the Hop Dealers' Exchange was incorporated in an effort to "bring the hop producers into close relation with the hop sellers."  The New York Times reported "Albert Lilienthal is President of the new Hop Exchange."

In the meantime, Alice busied herself with causes, like the Great Hebrew Fair in Madison Square Garden in December 1895.  The Times said that never before "had such a vast fair in all details ever been held in this or any building heretofore in this city.

It would seem that Alice was most comfortable conversing in her native language.  The several help wanted ads throughout this period routinely requested "German," or at least "German-speaking."  And it appears she expected her servants to work hard.  An advertisement in the New York Journal and Advertiser on December 11, 1899 emphasized that the "chambermaid, waitress, laundress" she for whom she was looking should be a "strong girl."

After 19 years in the house, the Lilienthal's put it on the market in November 1906 with an asking price of $35,000; the same price they paid for it.  Whatever the reason for leaving, the family intended to take nothing with them.  An auction of the entire contents of the "sumptuously furnished residence of Albert Lilienthal, Esq." was held in the house on November 26.  Included were all the furnishings, about 70 oil paintings "of great merit," and the Alice's silver and crystal.

The auction announcement noted that "the furniture, the walls and the floor coverings, decorations and bric-a-brac, cost a large sum of money, the furniture from the best cabinet makers from abroad and at home."  The vast collection of artwork, it said, was "chosen by a connoisseur."

Two days before the auction Hugo Meyer and his wife, Bella, purchased the house.   At the time well-to-do homeowners were remodeling architecturally passé houses into modern American basement style residences (doing away with the tall stoops).  Hugo and Bella set out to do just that.

On January 18, 1907 The Evening Post reported that "Plans have been filed for remodelling the 4-story and basement residence at No. 126 West 78th st., owned by Henry Meyer.  It is to have a new facade of brownstone, with a central entrance, and a foyer hall, and new ornamental windows, and a decorative gate and railing.  The improvements are to cost $19,000."  But for whatever reason, those plans never went forward and the architectural continuity of Guastavino's romantic row was preserved.

Hugo Meyer had gone into business in 1884 importing silks and woolens.  In January 1890 he brought his brother, Felix into the firm, forming Hugo Meyer & Co.   The firm imported silks and woolens, as well as representing domestic manufacturers.

When Felix's wife, Nellie died in March 1913, her funeral was held in the 78th Street house.  Interestingly, in reporting on the location, The New York Herald called it "the residence of Mrs. Hugo Meyer."

Hugo and Felix were additionally involved in real estate, both separately and together.  They wheeled and dealt in properties not only in Manhattan, but Brooklyn.  But by 1915 they had formed a surprising enterprise.--the Karczag Publishing Co., Inc.

The firm was the U. S. representative of music and play publisher W. Karczag of Vienna, Austria.  The Meyers contracted with major theater owners, like the Shubert Company, to stage the Karczag works.

Hugo Meyer leased No. 126 in January 1916 to David W. and Ora N. Childress.  They almost immediately sublet it to Shirli Rives, described by the Sacramento Union as "a prima donna who is famous in musical comedy."  By now, Rives had branched out into vaudeville and found the popular vehicle so profitable that she commissioned Edgar Allen Woolf to write The Song of the Heart for her.

Shortly after moving into the 78th Street house she appeared in a vaudeville performance at the Colonial Theatre.  Also on the program was the minstrel act of Lillian Boardman and Frank Hurse, the Four Meyakos, the Primrose Four, the Oxford Trio and other acts. 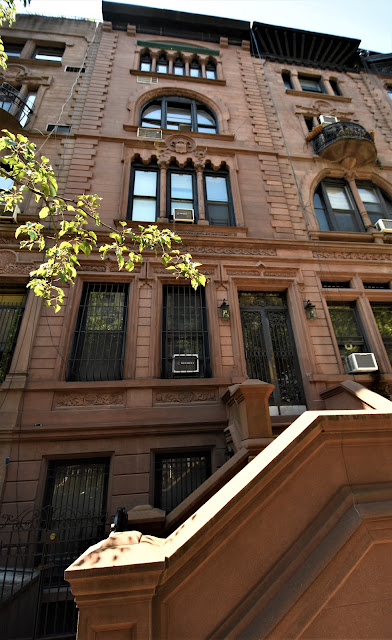 By the Depression years No. 126 was owned by Anna and Walter C. Ferguson.  It was still a private home when they leased it in April 1931 to Esther Esser.  She sublet a portion of the house to the Pulaski Society as its club rooms.

On December 11, 1932 The New York Times reported that the club's secretary, Bronislaus Gliwa "is compiling a list of books in English dealing in one way or another with Poland.  The books may be fiction or non-fiction, they may be translations from the Polish, or they may have their settings in Poland."  Gliwa was asking for help from readers of the newspaper in compiling the list.

The Pulaski Society annually celebrated September 12 as a holiday honoring the "relief of Vienna."  But 1933 was a special year, the 250th anniversary of the event.  On August 28 a meeting was held "to lay plans for the celebration," according to The Sun.  The article explained "On September 12, 1683, King Jan Sobiesky of Poland drove back the Turks and Tartars from Vienna, finally breaking their power as thoroughly on land as Don John of Austria broke it on the sea."

Within the next decade No. 126 was being operated as a rooming house.  Josef Weizenberg was renting here when he earned his dental license on July 23, 1943.  And following the end of World War II Seaman Second Class Eric Godefroi took a room.

On April 21, 1946 the United States Navy took advantage of the Easter Parade crowds to recruit.  The New York Times reported "The Navy seized the opportunity yesterday in the Easter fashion parade to show its new uniforms for enlisted personnel when three sailors from a recruiting station took posts at Fifth Avenue and Fiftieth Street.  Accompanied by three models in Easter finery, the men were in sharp contrast with sailors still wearing the old-style uniform."  Among the three was Eric Godefroi, who modeled "dress whites, consisting of straight trousers, civilian-style shirt, black tie and the old-style Navy cap." 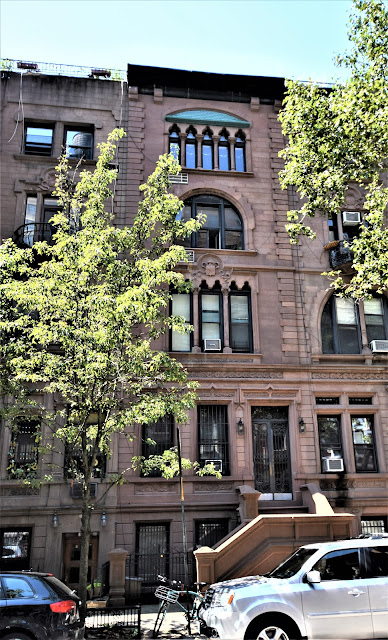 Change came in 1968 when No. 126 was converted to a triplex in the basement through second floors, and one apartment each on the third and fourth.  Outwardly, other than replacement windows, little has changed since the Lilienthals moved in in 1887.