The old Federal-style double house at the convergence of Washington Place, West Fourth and Barrow Streets most likely always had two shops in the ground floor.  Faced in brick and trimmed in stone, its hipped roof was distinguished by a single dormer.

For years the shop on the West Fourth Street corner, No. 193 West Fourth Street, was home to Nathan Metzger's butcher shop.  In 1876 Louis Strauss was not only a resident of the building, but an employee in Metzger's shop.  That year he and his boss would face one another in court.

On March 5 a regular customer, Mrs. McCormick paid her bill of $40--a significant tab amounting to nearly $950 today.  When she came back ten days later to place another order, Metzger mentioned her outstanding bill.  Strauss, who had not told the butcher of the payment, found himself in a most uncomfortable position.

"Oh my! I collected $40 from that lady last week and lot the money," he exclaimed, according to The New York Herald.  The newspaper continued "Mr. Metzger, therefore, caused his arrest for embezzlement."  The following day they appeared before a judge.  "The prisoner said that he had lost the money, but was willing to make it good."  He was held on $1,000 bail awaiting trial.

Nathan Metzger's butcher shop remained at No. 193 West Fourth Street until 1886, when he closed his business.

Ten years later the Board of Aldermen renamed the little triangular space in front of the old building Sheridan Square, in honor of Civil War General Philip Sheridan.  No. 193 West Fourth Street received the new address of No. 1 and 2 Sheridan Square.

At the time the colorful Merton Clivette and his wife, the former Catherine Parker Chamberlin, were living in San Francisco.  Born in Portage, Wisconsin in 1868 as Merton Clive Cook, he changed his name to the French-sounding Clivette.  Having worked in a traveling circus as an acrobat and magician's helper, he now ran a vaudeville troop in which he performed his magic act.

In June 1900 E. Dieschbourg leased both shops, Nos. 1 and 2 Sheridan Square, and combined them for what the Real Estate Record & Guide listed as a "saloon and restaurant."

Four months earlier, on February 4, the New-York Tribune had written "The bright gowns, the bright lights, the melody and dancing of 'Broadway to Tokio' at the New-York Theatre have kept the house filled at every performance."  Among the acts listed were the famous Houdini, and "M. Clivette."

Merton Clivette was more than a vaudeville performer.  He had the uncanny ability to reinvent himself and self-promote with a unabashed superlatives and questionable credentials.  On July 15, 1900 an advertisement appeared in the New-York Tribune:  CLIVETTE--The world's greatest palmist; society's reader and teacher of palmistry.  Occultism taught.

By 1910 he had added hypnotism to his repertoire.  On March 15 the New-York Tribune reported "the Four Mortons and Clivette the hypnotist are at the Plaza Music Hall."

Clivette seems to have had aspirations for a more respectable livelihood.  He had enrolled at the Art Students League around 1906, studying under masters John La Farge, William Merritt Chase and John Henry Twachtman.  By 1918 he had left the stage for good and prepared for life as a full-time painter, entrepreneur, and landlord.

Getting his name inexcusably bungled, The Sun reported on May 23, 1918 that "Clifford Olivette" had leased "the building at 1 and 2 Sheridan Square" for five years.  The family moved into an upstairs apartment while Clivette converted Dieschbourg's former restaurant to The Art Mecca, where his paintings were sold, and the Bazaar de Junk, a curiosity shop of antiques and bric-a-brac to which Clivette attached romantic if dubious histories.  He installed The Soul Light Shrine in the basement, admissible by at 25 cent fee.

Clivette's vaudeville background had taught him how to lure the public.  He referred to himself as "The Man in Black," and as an artist, a "great modern master."

Not everyone was fooled by Clivette's sometimes outlandish stories about the items he sold.  On October 5, 1919 The New York Times wrote "Clivette, character extraordinary and Munchausen plenipotentiary, will sell you in his store--something straight out of Balzac--anything from the salt cellar that Robespierre used in his last meal to a preserved icicle brought by Peary from the north pole.  Pass the Bon Mot is the motto of this corner.  Here nothing is true but debts."

Clivette's embellished histories were lavished on the wrong visitors on January 28, 1919.  That night, just after midnight, a group of uptowners "slumming" in the Village stopped by No. 1 Sheridan Square.  Among them were newspaper cartoonist Oscar Cesare and his wife, and historian Bill Van Der Weyde.  They were shown the Art Mecca and the Soul Light Shrine (after having paid their 25 cents each).

The Sun reported that when Catherine pointed out "original" paintings by masters like Van Dyck, Bouguereau, Turner and Constable, Cesare asked if they might have a Michaelangelo "lying around loose."  Such a shame, she answered, they had "several" but they had just been put into storage a few days earlier.

In the Soul Light Shrine, Catherine pointed to the coal chute vault lights.  "Those were slave holes.  In the olden days the slaves were dropped down through those holes and kept in bondage in this very cellar.  See those chairs fastened to ancient staples in the walls?  Those chains prove the historic fact that this house was once a slave market."  (At this point the reporter editorialized that the same ancient chains "to-day curiously are on sale at Hammacher, Bailey, Banks, Biddle & Schllemmle's hardware store in Fourth avenue.")

Having apparently learned the routine well from her husband, Catherine told that in that very cellar "General Washington and his Generals used to meet and plan their greatest campaigns."

Clivette joined in when the tour returned to the main floor.  "Nathaniel Hawthorne and Edgar Allen Poe were but two of the many literary lights who used to frequent the bar that once occupied the room in which we are now standing.  Thomas Paine, author of The Age of Reason, lived in the attic up stairs and O. Henry wrote most of his stories here also."

The educated men had now had enough.  Van Der Weyde happened to be president of the Thomas Paine National Historical Association and gave Clivette his own history lesson.  He told him "Would it interest you to know...that this house wasn't built until after Paine died?"  And Mrs. Cesare chimed in saying that she had lived in the same house with O. Henry "from the day I was born until he died.  He never lived in Greenwich Village."

A near brawl broke out as the Clivette family--daughter Alita was there as well--and their visitors traded loud facts back and forth.  When Patrolman Francis Aloysius McGovern arrived he was met by "the cries of all the Clivettes, who were yelling so tremendously that even Greenwich Village began to button on clothes and run to the scene."  The Sun concluded that "nothing came of anything, except perhaps this latest and minute historic record of a thunderingly historic house."

Merton's and Catherine's inventiveness extended to daughter Juanita, who according to them, "calmly announced"  in 1913 at the age of five, that she was their daughter in body only.  Her consciousness, she said, "was that of Sappho, the ill-fated Grecian poetess of 2,500 years ago."

A full-page syndicated story reached newspapers nationwide in September 1920.  "Since that time the child has persisted in her attitude, has given what she claims to be details of her previous life, and has written a number of truly extraordinary poems," it said.   The article continued "A month ago Juanita announced that she is destined to live on this earth only twelve years longer!

"'By the time I am twenty-four,' she said, 'I will be united to Phaon.  But not here.  It will be in another world, where he will give me all the love he denied me centuries ago.  After that I will never come back to this earth."


In 1922 The Quill, the local Greenwich Village newspaper, noted that at the "Art Mecca or Bazar De Junk" the visitor "may see the priceless Clivette and his inspired daughter Juanita Sappho."

Regular visitors at what they called "Clivette's 'Lost Paradise'" were English-born brothers Hugh and Malcolm Hardyman.  In July 1921 Hugh told reporters that in the brief time he had been in Greenwich Village he "had formed many delightful associations..notably that with M. Clivette, yclept 'The Man in Black,' author of The Confession of a Palmist, The Suffragette and The Royal Painter, and sire of Juanita Clivette, otherwise 'Sappho.'"  Hardyman said of her "not to know [her] is to be unknown."

The reason the Hardyman brothers appeared in the newspapers was because of a bet Hugh had made with Merton Clivette.  Sitting around the shop one day he bragged about the "superiority of his powers over the fair sex," and insisted he "can kiss 'em all--sooner or later."  Clivette dared him to prove it and offered him 1,000 English pounds ($5,000 in American currency) if he could kiss 1,000 girls between New York and California.

On July 29, 1921 Hugh set off on his kissing safari.  With him were his brother and an Irish friend to guarantee the tally.  The terms of the bet allowed them to use any transportation necessary.  The New-York Tribune reported "The kissing is to begin outside New York's city limits.  The first victim will be a Yonkers girl."  Whether it was Handyman or Clivette who lost the bet is unclear.

It may have been her family's cavalier disregard for historical accuracy that prompted daughter Catherine to found the Greenwich Village Historical Society in the family apartment in 1922.  The society's meetings were held in there once a week.  Single themes were sometimes the topics of the meetings.  The September 1922 meeting was deemed "Indian Night," and another was "Alexander Hamilton Night."  Not surprisingly, Catherine's father never appeared as a guest speaker.

Catherine's leadership led to bronze plaques being affixed to historic sites in the Village, including No. 59 Grove Street, the site of the former home of Thomas Paine.  On February 18, 1923 The New York Times noted "The house is just west of Seventh Avenue and not far from the old building at 1 Sheridan Square, where the society meets each week for talk on bygone village days and the value of true Americanism."   Later that year a plaque was unveiled at the site of Aaron Burr's Richmond Hill house.

In the meantime, Clivette's bombastic self-marketing and carnival-like shops overshadowed his true talent.  His paintings were exhibited in solo and group shows beginning in 1923.  In the 1930's his works would be seen in exhibitions at the Philadelphia Museum of Art, the Los Angeles Museum (twice), and the Anderson Galleries of New York.

Merton Clivette's lease on No. 1 Sheridan Square expired in 1923.  The following year the Department of Buildings issued a demolition permit for the property; ending one of the most colorful chapters in Greenwich Village history. 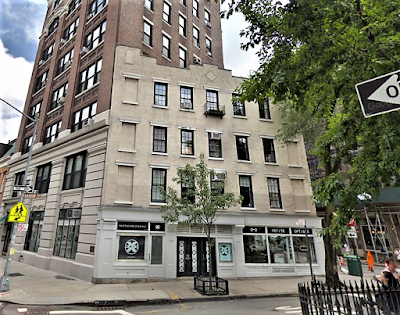