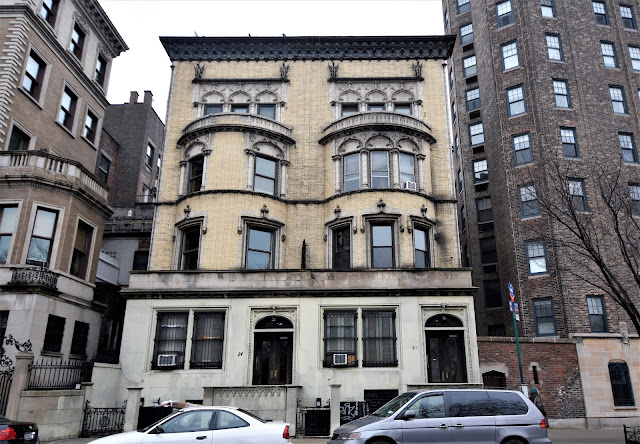 In 1893 the trustees of the New York Orphan Asylum sold off its sprawling grounds overlooking the Hudson River.  Stretching from Riverside Drive to West End Avenue and from 73rd to 75th Streets, it had been bucolic in 1836 when the orphanage was erected.  Now it was among the city's most valuable property.

The orphanage grounds were divided into building plots; many of which were purchased by individuals rather than developers.  In an unusual cooperative move, eight such buyers hired mansion architect C. P. H. Gilbert to design harmonious side-by-side homes on West 74th Street.  Almost simultaneously Asa Hull and George McKesson followed suit.  They purchased the lots at Nos. 23 and 24 Riverside Drive, respectively, in 1895 and hired Gilbert to design nearly matching homes.

Gilbert turned to ornate Francois I Revival style for the project, completed in 1897.  As he had done on some of the 74th Street homes, he place the upper floors upon a somewhat boxy and unadorned limestone base.  Dog-legged stoops with solid wingwalls led to entrances.

The upper three floors were faced in beige Roman brick and trimmed in terra cotta.  Two story rounded bays provided balconies at the fourth floors. Above the trios of elaborately decorated fourth-floor openings pairs of fearsome griffins stood guard below an intricate metal cornice.  The subtle difference between the two homes was the absence of the center bay windows at No. 24.

Asa Hull was the principal of Asa Hull & Co. at No. 132 Nassau Street, printers of hymnals and religious songbooks.  As was often the case within moneyed families, he put the title to No. 23 in the name of his wife, the former Sarah J. Warren.   (Although, mysteriously, the earliest building documents list "Lisa Hull" as owner.)  The couple's summer home was at Shelter Island.

Hull not only printed the hymns, but wrote them.  He had stepped away from his niche of Sunday School songbooks and hymnals briefly in 1877 when he published Hull's Temperance Glee Book.  The cover described it as containing "a choice variety of Temperance Songs, Duets and Choruses suitable for the sociable entertainments of the several Temperance Organizations."

Sarah shared her husband's uncompromising moral views and held the office of vice-president of the National Christian League for the Promotion of Social Purity.

When a tax was proposed on "country checks," (or out-of-state checks) in 1899, Asa Hull protested by means of a letter to the editor of the New-York Tribune.  It shed much light into the operations of his business, saying in part:

My business is mostly mail business, and nine-tenths of the remittances come from the country in checks, many below $1 each, and the result will be that I shall be obliged to decline all small checks...The nature of my business is such that I could not stand any further taxation.

In the meantime, George C. McKesson was a partner in the wholesale pharmaceutical firm McKesson & Robbins, founded in part by his father, John.   The McKessons summered at Monmouth Beach in New Jersey.  (George's son by a former marriage, George, Jr., had taken his adopted father's surname.  George McKesson Brown would eventually build one of Long Island's most magnificent estates, Coindre Hall.)

Almost assuredly, the lifestyles of the McKessons and the Hulls were starkly different.  The McKesson name appeared regularly in the social activities of New Jersey resort district.  Such was the case on July 3, 1915 when the McKessons were among the more than 200 guests at Hilden, the summer estate of the William Barbour.  There they rubbed shoulders with millionaires with names like Schiff, Borden, Fahnestock and Straus.

While No. 23 was soon sold to Sarah T. Adams, the McKessons remained next door through the 1920's.  But by 1930 both residences were being operated as rooming houses.

The tenants during the Depression years were not all upstanding citizens.  "Major" Irving F. Coleman was living at No. 24 on December 3, 1930 when he was arrested there "on the charge of writing worthless checks passed in Washington," according to The New York Times.  The article added that he "faced the additional charge of impersonating a Federal officer." 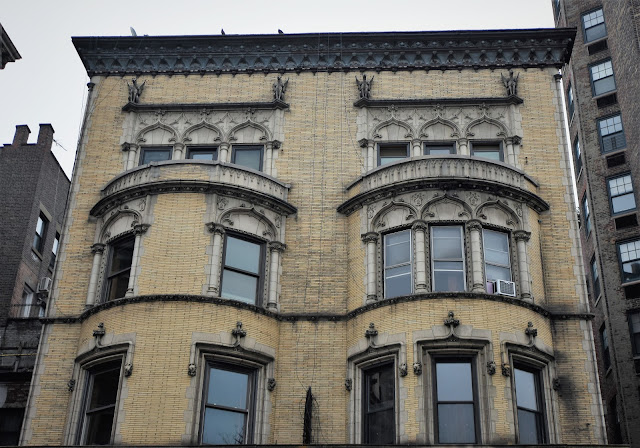 Colman's roommate, John Otis Handy, was an accessory to the crimes.  The Times reported that he "had cashed one of the worthless checks."  As for Coleman, he had invented his rank.  "It was learned that Coleman was no major and that he had found persons willing to cash his checks, it is charged, because of a portly and dignified bearing, which fitted the borrowed title."

The former Hull house had its own criminal tenant.  On April 2, 1943 Robert J. Cassidy and three cohorts stole a truck containing $85,00 in liquor in Long Island City.  It was a major haul, worth $120,000 today--or it would have been had they not gotten caught.  Cassidy pleaded guilty in the Queens County Court on May 17.

On January 13, 1945 The Times reported that Stanley Estates, Inc. had purchased the "rooming house at 23 Riverside Drive."  It was quickly converted to apartments, two per floor.  The same firm acquired No. 24 and converted it to apartments two years later.

The conversion to apartments did not initially improve the respectability of the buildings' tenants.   Thomas Hirsch, who lived in No 23 in 1958, went by the street name "Schoolboy."  He was arrested in a drugstore on Broadway and 50th Street on May 9, 1953 charged with bookmaking.  The police called him a "known Broadway figure" in illegal gambling.

Martin J. Yamin lived next door in 1955.  A former Baltimore judge, the 32-year old was accused of taking part in the hold-up and murder of Joseph Aronowitz on February 15 that year.  Aronowitz, who lived on West 83rd Street, was scheduled to testify for the state in a Baltimore hold-up case.  But, according to police, he was "taken for a ride" before that could happen.  His body was found in an abandoned automobile in Brooklyn. 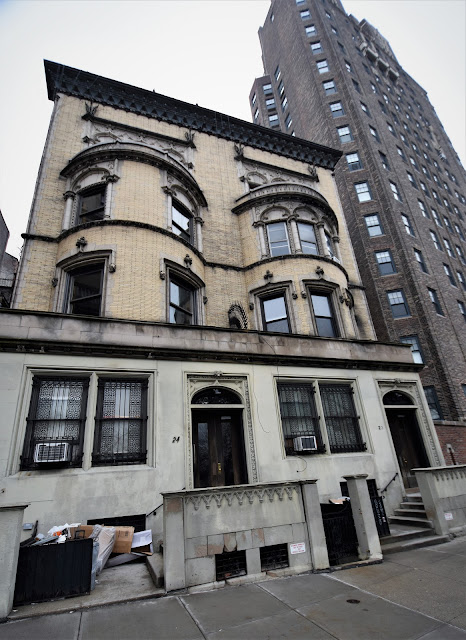 Happily, unflattering press ended around the same time.  By the end of the century there were small commercial tenants as well.  Birch Music Press was in No. 24 in the early 1970's; and Riverside Books, a publishing firm, was in No. 23 by the early l990's.