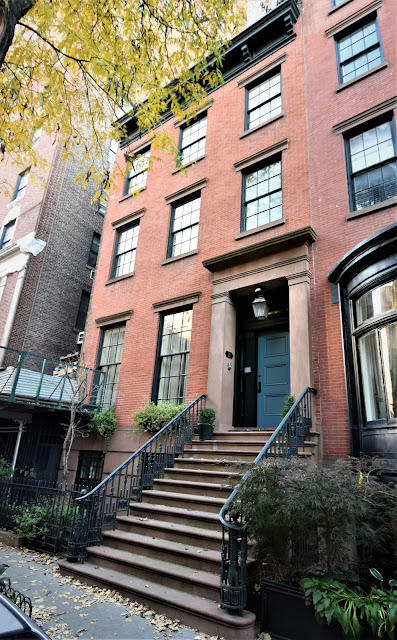 It is unclear if Thompson ever lived in the stylish new residence; but by the 1850's it was home to the William Roberton family.  It was the scene of a heart-breaking funeral of the Robertons' two-and-a-half year old daughter, Margaret on February 16, 1858.

At the time Erastus Cornelius Benedict was a well-known and highly-respected citizen.  Born in Branford, Connecticut on March 19, 1800, his ancestors had landed in Massachusetts Bay in 1638.  An attorney, he had been elected a member of the Common Council of the city in 1840; was elected a regent of the Free Academy in 1855, and to the lower house of the State Legislature in 1848 (he would be re-elected in 1864).  He would serve as the president of the Board of Education, was a member of the Executive Committee of the New-York Historical Society, had helped incorporate the Apollo Association "for the promotion of the fine arts," and was a director of the Institution for the Deaf and Dumb.

Benedict's important political and social status was in clear evidence on February 20, 1861 when the newly-elected President Abraham Lincoln was in town.  While he was tied up meeting with political figures, Mary Todd Lincoln held a reception in the Astor House.  Among her guests was Erastus Benedict.

It was around this time that Benedict and his wife, Caroline, moved into No. 10 West 10th Street.  Like those of their neighbors, the Benedicts' interiors would have been furnished luxuriously--rosewood tables with marble tops, French-manufactured carpets and rich fabrics.

Benedict's nephew, Abner, enlisted in the State Militia at the onset of Civil War.   He distinguished himself for leadership and valor.  After being seriously wounded--shot through the lungs at Fredericksburg on December 13, 1862--he refused to leave military service.  Even when his health began to fail, he steadfastly continued as General Grant's headquarters guard.  He died of complications from the wound on May 15, 1867, five years after being shot.

His body was brought to the West 10th Street house and the following day The New York Times reported "The funeral will take pace under military escort from the residence of his uncle...on Saturday, the 18th, at 10 A.M."

The Benedicts, described by The New York Herald as among "the most prominent people of the city," entertained J. P. Meehan, the editor of The Irish American, on the night of February 29, 1870.  Meehan's outspoken views on Irish independence placed him at odds not only with the British government, but with loyal English expatriates here.  His was a dangerous stance.

Around 11:00 that night Meehan left.  As he descended the stoop he noticed several men on the dimly-lit block.  As he walked briskly toward Broadway, he passed them, one of who he recognized as Dr. James Kiernan.  Seconds later he fell to the pavement with a bullet wound in the back of the neck.  Meehan survived what The New York Herald described as a "dastardly attempt at murder."  The newspaper credited heavenly powers with his recovery.  "The attempt proved nearly fatal--Mr. Meehan's preservation from the deadly bullet and more deadly intent being singularly providential."

Another highly disturbing event occurred the following year.  As Police Officer Dunn walked by the house around 8:00 on November 26, 1871, he noticed an infant under the stoop.  It is possible the mother left the newborn at the service entrance in hopes that the wealthy homeowners would take it in.  But by the time Dunn discovered it, the baby had died.

Benedict continued his work in education, politics, the arts and charity.  In 1875, for instance, he helped found the Association for Improving the Condition of the Poor.  In the meantime, he found the time to write.  He was the author of American Admiralty, A Run Through Europe (a book of his travels), and the Hymn of Hildebert, a translation of medieval hymns.

Erastus C. Benedict died in 1880.  His funeral was held in the South Reformed Church at Fifth Avenue and 21st Street on October 25.  The New-York Tribune noted "The dead man was attired in his Chancelor's robes, his university cap lying upon his breast.  The coffin was covered with black velvet, was lined with white sating, and had silver mountings."

The following month the Benedict estate sold the property to Helen L. and Henry A. Oakley.  The couple paid $26,000, or about $700,000 today.  Like Benedict, Oakley was a familiar name within Manhattan's social and political circles.  In addition to his legal practice, he was a vice-president of the Board of Managers of St. Luke's Hospital, a vice-president of the Church Club of New-York, and treasurer of the Citizen's Committee on High-Licence (an organization which pushed for restrictions on "liquor traffic and the diminution of crime and taxation that will surely follow").

Living with the childless couple was Julia Hawks Oakley, the daughter of Henry's deceased brother, Richard A. Oakley.  Some of Manhattan's wealthiest citizens were present when she was married to Edwin Stevens Allen on June 2, 1890 in Calvary Episcopal Church on Park Avenue at 21st Street.   Julia's maternal grandfather, the Rev. Dr. Francis Lesoer Hawks, had been rector of the church three decades earlier; and a stained glass memorial window to him was decorated with flowers for the ceremony.

Oakley's reputation was stainless and the charitable organizations he served had no reason to worry about his handling their funds.  And somehow he almost always managed to obtain positions that enabled him to receive the donations directly.  On August 10, 1893, for instance, an announcement appeared in The Sun saying "a society has been formed in this city to agitate for the abrogation of the Russian extradition treaty."  The notice added "The membership fee is $1, which will be received by Mr. Henry A. Oakley."

Helen and Henry lived well, spending summers at fashionable resorts and moving among polite society.  On July 2, 1893 The New York Times advised "Mr. and Mrs. Henry A. Oakley of 10 West Tenth Street have taken a cottage at Harrington Park, N.J."

But Henry's wealth and sterling reputation were about to come crashing down.  For some time he had served as treasurer of American Church Missionary Society.  In the spring of 1895 a review of the books revealed that a massive amount of money was missing.  The New-York Tribune described the organization's resultant condition saying the society's finances "have been crippled by the shortage."

The Society announced it "did not intend to bring any legal proceedings" against him.  However on March 7 the New-York Tribune reported "The muddling of the accounts of the American Church Missionary Society...has led to the retirement of its treasurer, Henry A. Oakley."

As partial reparation title to the 10th Street house was transferred to the American Church Missionary Society, which initially leased it to James P. Paulding and his wife.  Paulding was a partner in the brokerage firm of Paulding & Slosson, was president of the F. O. Norton Cement Company, and a director in the Colwell Lead Company.   In 1897 the Society sold the house to the couple, who paid exactly $33,069.74--the equivalent of $1 million today.

Paulding was also a supporter of the Society for the Prevention of Cruelty to Animals--and so he was familiar with bravery medal it awarded once a year.  That knowledge came into play on November 17, 1902.  He was passing by Madison Square Garden where the annual Horse Show was taking place.  The show attracted the cream of Manhattan society and their costly carriages lined the streets in front of the venue.

Something frightened a work horse pulling a delivery wagon and it took off among the "fashionable equipages in front of Madison Square Garden," as reported by The Evening World.  Policeman Casey darted out into the street, grabbing the frightened horse by the bridle.  "He was dragged and kicked by the horse and cut by the lines while holding on for over a block.  But he steered the horse in and out among the fine private carriages"

When Casey finally brought the horse to a halt, he looked for his new blue helmet which he had worn for the first time.  When he found it, it was crushed.  Paulding overheard him say "Well, that's a shame.  I just paid $2.40 for that and now I'll have to get another."  (It was, actually, a pricey loss for the civil servant, about $70.50 today.)

Paulding assured the officer not to worry about the helmet, "for he should have as many more as he wished."  He then went directly to the Society for the Prevention of Cruelty to Animals to nominate Casey for the annual medal.

Paulding died in the couple's summer residence in Barclay Heights, Saugerties, New York, on August 2, 1916.  Two years later, in May, his widow sold the 10th Street house to Archibald C. Kains and his wife.  The couple would not remain long, selling it to Margaret E. Rutledge, a fledgling real estate operator, in 1921.  The house was priced at $60,000, more than $820,000 today.

Margaret converted the former mansion to an upscale rooming house.   Over the next two decades it would be home to tenants like Mrs. Harold Whitley.  She was involved in a terrifying incident on March 5, 1932 when she and Margery Clement were passengers in a bi-plane piloted by A. C. Eustis.  The trio was heading from New York to Norfolk, Virginia.  Eustis lost his way, could not find the airport, and realized that he was running out of fuel.  He made a forced landing on the beach at Ocean View, Virginia where the uneven surface flipped the plane.  No one was seriously injured, but locals immediately sent out the alarm that "the Lindbergh party had crashed in the bay."

Other tenants in the 1930's were Assistant District Attorney James L. Murray and actress Eleanor King and her lawyer husband Lowell M. Birrell.

In 1956 a significant conversion resulted in two and three apartments per floor.  It was most likely at this time that the lintels were shaved flat and the stoop removed.  Tenants entered through the new entrance at the former English basement level.

Half a century later, an astounding renovation was begun by Eric and Andrea Soros Colombel.  The couple purchased the house in 2006 for $11.5 million and started "top-to-bottom updates and renovations," as worded by The New York Times.  (Andrea Colombel is the daughter of billionaire financier George Soros.) 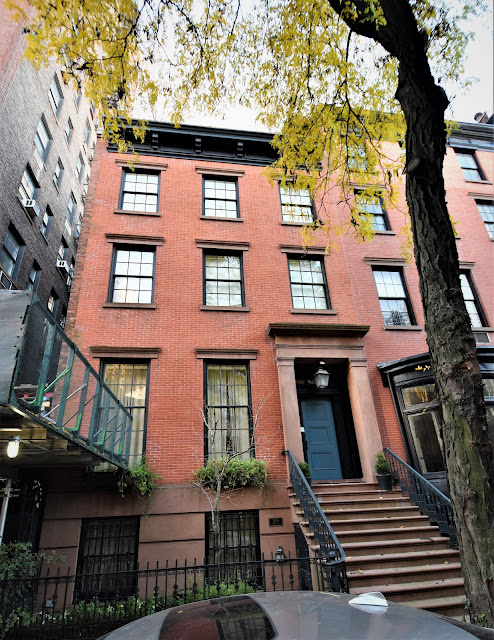 When the renovations were complete, the stoop and the lintels had been restored to their 1844 appearance.  Inside was a different story.  The enlarged building (now 8,500 square feet) had 21 rooms, including seven bedrooms and eight and a half baths.  The basement level, once the workplace of the Benedicts' cook, laundress and maids, contains a stone-walled fitness center complete with a ballet barre, a sauna and steam shower. 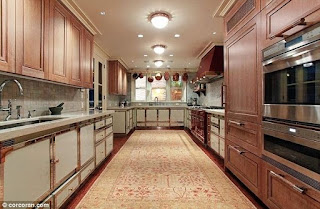 The Colombels sold the mansion in the fall of 2015 to Michael A. Karp, founder of the University City Housing Copany, for $20 million.