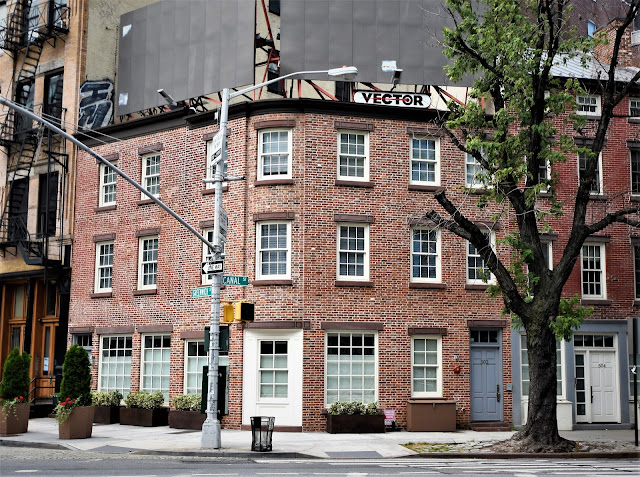 Greenwich Street was laid out in 1761 as First Street, but the name soon changed based on its being the main route from New York City to Greenwich Village.  It was intersected in 1809 by east-west running Canal Street, so named for the eight-foot wide drainage canal that was to run down its center.

The canal was completed in 1811, and covered over in 1819--creating an especially broad, 100-foot wide roadway.  John Y. Smith may have been anticipating the improvement of Canal Street when he  began construction on his dual-purpose structure at the southeast corner of Greenwich Street in 1818.

Smith was a manufacturer of hair powder and starch.  He leased the oddly-shaped plot from Alexander L. Stewart and his wife, Sarah (who was the daughter of Leonard Lispenard, whose name still survived in the area's common name, Lispenard Meadows).  The name of Smith's architect is unknown, but he produced a striking Federal-style double building on the site.

Three stories tall, the structure almost doubtlessly had a peaked roof with dormers.  Paneled brownstone lintels and Flemish bond red brick were elements expected in the style.  But the architect handled the plot's off-kilter corner by rounding the facade.  The result was a highly unusual and elegant design.

Smith and his family lived in the upper floors, while he operated his business at street level.  He moved on in 1829 and title to the property was transferred that year to Alonzo Alwyn Alvord.  Alvord was the owner of a highly-successful hat store on the Bowery.  The same year he purchased Smith's house and store he completed construction of a row of speculative houses on MacDougal Street, just south of Washington Square.

By now the former Smith house had been given an address, No. 478 Greenwich Street.  It would not be until around 1852 that a second address, No. 502 Canal Street, would be added.  The division may have had to do with the two storefronts--one on both streets.  In 1827, while Smith was still operating here, Edward Pew had opened his hat shop in the building.

Alexander Stewart reacquired the property in 1836 and sold the building the following year to Florence Riley, a "tailor," who most likely was a dressmaker as well.  Florence seems to have run her shop here.

Ralph Marsh owned the building in the 1850s, at which time J. Murphy's saloon had taken over the corner storefront.  Although Murphy still had three years left on his lease in 1859, he was looking to get out of the business.  His advertisement in The New York Herald on April 6 offered "For Sale--A first class corner liquor store...with cheap rent."

Peter Roach took over the saloon.  He was slapped with a $100 fine on February 26, 1867 for violating excise laws--most likely for selling liquor on a Sunday.

By 1871 the Greenwich Street store was home to a wholesale grocery business.  The owner seems to have been overwhelmed that year, when he sought a partner.  He advertised in The New York Herald on March 1:  "Wanted--A reliable person to take one-half interest in a wholesale and retail Provision and Produce Business; an unusual opportunity is offered."

Whether Peter Roach still owned the saloon next door is unclear; but in 1873 the owner's health was seriously failing.  An advertisement on June 10, 1873 offered "For Sale--The lease, fixtures, and stock of the Liquor Store, 502 Canal street, corner of Greenwich; reason for selling, bad health of the proprietor."

There were apparently no takers and on Christmas Eve the following year an auction was held at noon.  The announcement of the "mortgage sale" listed "fixtures and stock of the well known Liquor Store, 502 Canal street...consisting of English Pump, Glassware, Bars, Silverware, &c.  Also a fine stock of imported Liquors."

In the meantime, the upper floors had not been a private residence for years.  Low income renters occupied rooms, like the widow G. Hild, in the 1880s.  She lived on the pension of her patrolman husband's yearly pension of $30, less than $750 today.  In the early 1890s, barber Frederick Pheiffer lived here with his wife, three children, and three other boarders.

For years Dr. George A. Hayunga, whose office and home was on Broome Street, had been highly active in local affairs.  Born in Canada, he had served as a surgeon in the Union navy during the Civil War.  He was the the chairman of the West Side Protective Association in 1882, leading the attacks against the New York Central and Hudson River Railroad's blocking streets and running cars on Sundays, for instance.  As early as 1872 he had transformed the former saloon into a pharmacy.

Hayunga and his wife, Margaret, had three surviving children.  By 1902 the family had moved into No. 504 Canal Street, next door, along with a brother, cousin and one servant.  Margaret was involved in her husband's business and in 1906 held a retail druggist license.

The building was still owned by the Ralph Marsh family.  They received a notice of violation from the Department of Health on August 1 that year for "defective plumbing and defective draining."   The situation was much more serious than it first appeared.

The upstairs rooms were still being rented to blue collar tenants, like Peter Murphy who earned $75 a month from the city as a deckhand.  But residents were becoming ill at a rate that prompted a Health Department investigation.  The August 1 report deemed No. 502 Canal Street "dangerous to life and is unfit for human habitation."   A "nuisance" on the property, said the investigator, "is likely to cause sickness among its occupants."  An Order to Vacate gave the residents six days to get out of the building.

The problems were repaired by October and the building filled again, including Peter Murphy who lived here at least another two years.

In December 1908 Samuel Weil purchased the building from the Marsh estate.  The New York Times pointed out that "Mr. Weil owns adjoining property, and his holdings now include 502 to 506 Canal Street, 472 to 480 Greenwich Street, and 459 and 461 Washington Street."  Real estate operators most likely anticipated Weil's replacing the large block of nearly century-old structures with a modern loft.  But that never happened.

The following month George Hayunga promoted an ambitious cause.  He addressed the annual meeting of the Lutheran Inner Mission Society on January 18, 1909.  The Times reported he "urged the need of a Lutheran hospital to cost from $50,000 to $60,000, a Lutheran dispensary to maintain which $5,000 yearly would be necessary, and a district medical board."

By March 1911 the Society of the Lutheran Hospital had been formed, and its constitution adopted.  But as the time-consuming process of acquiring land, planning the facility, and other intricate details were ironed out, Hayunga seems to have taken matters into his own hands.  The 1914 New York Charities Directory listed the Lutheran Hospital of Manhattan at No. 502 Canal Street.

The directory described the facility as being "for care and relief of ill and indigent poor of the Borough of Manhattan, without regard to race, creed or color.  Accommodates about 100 daily."

In 1915 the Lutheran Hospital purchased land uptown, and on October 21 the following year the facility opened.

In 1919 the end of the line for the old buildings seemed unavoidable.  On September 12 Samuel Weil purchased No. 508 Canal Street from the Matthew Thompson estate.  He now owned the entire blockfront on Greenwich Street and 80 feet along Canal.  The New-York Tribune announced that he intended to improve the combined site "with a fire-proof structure."

Instead, however, Hayunga negotiated with his landlord.  On October 29, 1920 the New-York Tribune reported that Weil had sold him "the southwest corner of Canal and Greenwich streets."  Included with 408 Greenwich and 502 Canal Street were Nos. 504 and 506 Canal Street.  The newspaper noted "The buildings are among the oldest in Greenwich Village" and said "it is understood" that Hayunga "will alter the buildings for a private hospital."


George E. Hayunga continued to run his drugstore and clinic--and live in No. 504--for decades.   His free clinic administered to the poor in the neighborhood.  One local, in 1954, said he had delivered "at least 70 percent of all the babies in this section."

On March 8, 1941 the city was hit with a violent blizzard that dumped 11.6 inches of snow, paralyzed traffic and threatened lives.  George Hayunga was out in the storm and fell at the corner of Canal and Watts Streets.   The 75-year old was taken to Downtown Hospital with an injured hip, but recovered.

At the age of 90, Haunga retired from practice, although The New York Times remarked that "some former patients continued to consult him."  He died in his Canal Street home the following year on March 20, 1956.

By now the peaked roof had been removed from the corner building and large billboards erected.  George E. Hayunga III, also a doctor, sold the property in 1966, triggering a series of owners over the next few decades.

By the time the last Hayunga sold the building, the old pharmacy was once again a bar.  When the Landmarks Preservation Commissioned designated No. 480 Greenwich / 502 Canal Street a landmark in 1988, the building was in serious decline.  The store on the Greenwich Street side was vacant, and the Canal Street tavern was now a liquor store.  The brownstone lintels and sills were eroded and the 1819 brickwork was in desperate need of repointing.


In 2003 it was purchased for $3 million as the reborn Tribeca neighborhood promised residential potential.  But if the new owners were interested in rehabilitating the property, they moved very slowly.

On October 29, 2012 scaffolding girded the decrepit structure.  That night Hurricane Sandy arrived in New York City.  The massive blow the storm dealt to the building seemed to be irreversible.  The Department of Buildings marked it with a giant red X which declared it unsafe.  A red sign on the door warned "Do Not Enter or Occupy."

While the owners, Ponte Equities, promised to make repairs, nothing happened.  Two months later, in January 2013, a wall collapsed.  Preservationists and historians were outraged.  Among them was George Calderaro of the of the Historic Districts Council who called the inaction "demolition by neglect."

The owners insisted, however, that they intended to "remove the Canal Street facade by hand" and restore it with the original bricks.  And after an ignominious start, they came through. 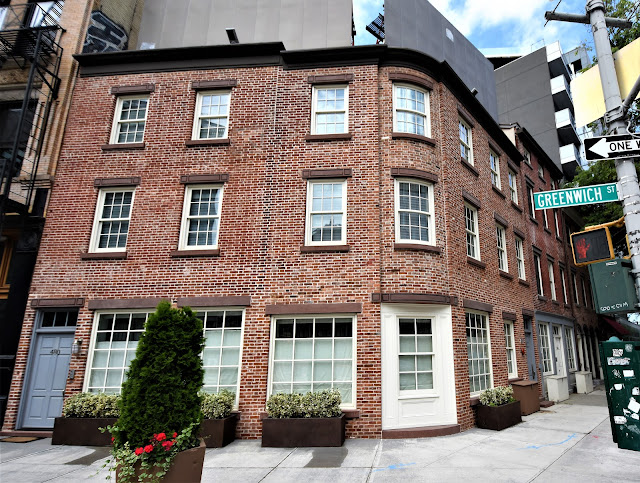 Under the direction of SRA Architecture, the nearly two-century old facade was restored and the interiors renovated to a single-family house.  The survival of the Federal-style building with its remarkable curved corner and equally remarkable history is just short of miraculous.