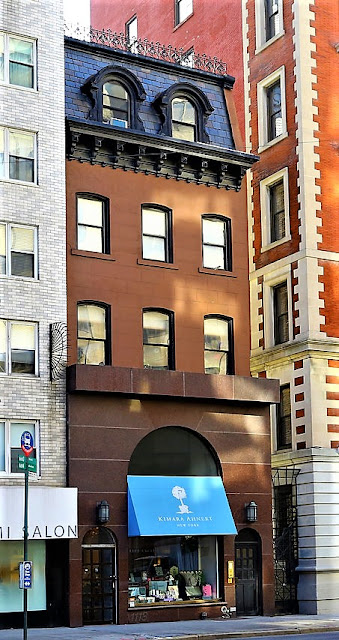 In 1853 Rabbi Bernard Illowy and his wife, the former Katherine Gitel Schiff, immigrated with their two children, Henry and Nettie, from Kolin, Bohemia (now the Czech Republic) to the United States.

Bernard came from a long ling of religious scholars.  He was recognized for his exceptional oratory abilities, and many of his sermons and speeches were published.  He held a doctorate from the University of Budapest and was fluent in Italian, English, French and German, and was literate in Latin, Greek and Hebrew.  But because of his opposition to the Habsburg Empire he was forced to leave his homeland.

The Illowy family was living in St. Louis when a second son, Jacob, was born.  As the eldest son, Henry was expected to become a rabbi, too.  He accompanied his father to principal U.S. cities where the rabbi preached.  But in 1864, at the age of 17, Henry changed his mind and announced he wanted to study medicine.

By then the family had relocated to Cincinnati, where Rabbi Illowy died in an accident in 1871.  Henry continued his studies, receiving his medical degree from the Miami Medical College of Cincinnati, and later studied in Berlin and Vienna.  By the time Henry and his siblings moved to New York in 1894, they had changed the spelling of their name to Illoway.

Henry was a specialist in children's diseases, but he never turned his back on religious scholarship.  He regularly wrote on biblical and talmudic subjects and was a member of the ancient Spanish-Portuguese Synagogue, Congregation Shearith Israel.

Jacob, who married Gertrude Kahn around 1890, went into business, becoming a partner in the LaMuriel Cigar factory on Avenue A.  Nettie eventually became a recognized artist of oil landscapes and seascapes.

James McNamara and his wife, Evelyn had lived in the 20-foot wide brownstone rowhouse at No. 1113 Madison Avenue since 1894.  Living with them was their son, Joseph, who was a Commissioner of Deeds.  The French Second Empire dwelling had been on the cutting edge of architectural fashion when built.  Three bays wide, the high stoop led to the parlor floor where, almost certainly, the windows stretched nearly floor to ceiling.

The elegant mansard level, however, drew the most attention.  Shingled in slate tiles, it sat above an exceptionally handsome bracketed cornice.  Two shallow, arched dormers were stylishly framed; and the roof was crowned with lacy iron cresting. 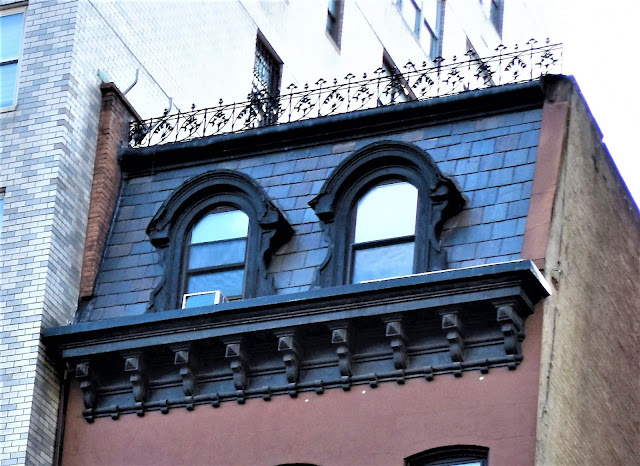 Henry Illoway, who never married, purchased the house from McNamara in March 1903.  His $12,000 mortgage, a third of a million dollars in today's money, points to the still-upscale residential nature of the avenue.   Nettie, also unmarried, moved in with him.

In 1907, the same year that Henry was elected president of the East Side Physicians' Association, his brother died.  Jacob's widow and their daughter, Mariam Ruth, moved into the Madison Avenue house with Henry and Nettie.

While the upper floors of the brownstone were now filled with the extended Illoway family, Henry converted most of the basement level to a free clinic for poor children.

On December 12, 1916 Gertrude announced Miriam's engagement to Richard Illowy, who had recently arrived in New York from Buenos Aires.  An Argentine native, he had been an importer of dyes until the outbreak of World War I.  He now intended to establish a new business in New York.

In reporting the engagement, The New York Times addressed what must have been on many readers' minds.  "There is only one letter difference between her name and that of her fiance."  What the article did not note was that the spelling "Illoway" was new to the family and Rabbi Bernard Illowy had never accepted the added "a."

It may have been the almost certain familial relationship that quickly undid the wedding plans.  Ten days later Gertrude announced that the engagement had been called off.  The New York Times simply wrote "No reason was given yesterday by Miss Illoway's relatives for the annulment."

Miriam remained in the house with her mother and uncle until May 1929 when she married Edward Jonas Phillips.  Phillips traced his American roots to the early 18th century and an ancestor, Moses Seixas, was the warden of the Hebrew Congregation of Newport, Rhode Island.

In October 1931 Henry Illoway decided to take his first winter vacation and went to Florida.  He had only just arrived when he became ill and he headed home, arriving in early November.  He had developed uremia and died in the Madison Avenue house on January 15, 1932.  He was 84 years old.  At his bedside were Gertrude, Miriam, and Nettie, who had come from her home in Washington.  His funeral was held in the house on January 17.

Illoway bequeathed his "large library of Hebrew works and a trust fund" to the Jewish Theological Seminary.  The bulk of his estate was divided among Gertrude, Mariam and Nettie.  He was specific in the use of the $5,000 he left to his brother's other child, Bernard.  It was to be used to "establish him as a physician or in any other honorable profession."

By now the Madison Avenue neighborhood had changed.  Private homes which had given way to apartment buildings now had shops appearing at street level.  In February 1934 the A. Schultze Company, Inc. purchased No. 1113 Madison Avenue from the Illoway estate.  Interior decorators, the firm had been located on Lexington Avenue for more than half a century.  Now on February 3 The New York Times announced the firm's plans "to remodel the building and make a two-story showroom of the ground floor."

The stoop was removed and a modern storefront installed over the basement and parlor levels.  There were now two apartments on each of the upper floors.

By mid-century A. Schultz was gone, replaced by Scott Service, described by a newspaper as having "a group of workmen who will take care of practically anything that needs cleaning or repairing."

When the white brick apartment building replaced the four properties at Nos. 1115 through 1121 in 1963, the former Illoway home became the last holdout on the block from the elegant post-Civil War row.

Throughout the next decades the retail space would be home to a variety of businesses.  In 1978 The Larder opened; a gourmet take-out shop that offered delicacies, some of which New York Magazine deemed "too expensive."   In 1990 a Beau Brummel branch opened in the space; followed by Kimara Ahnert in 2010. 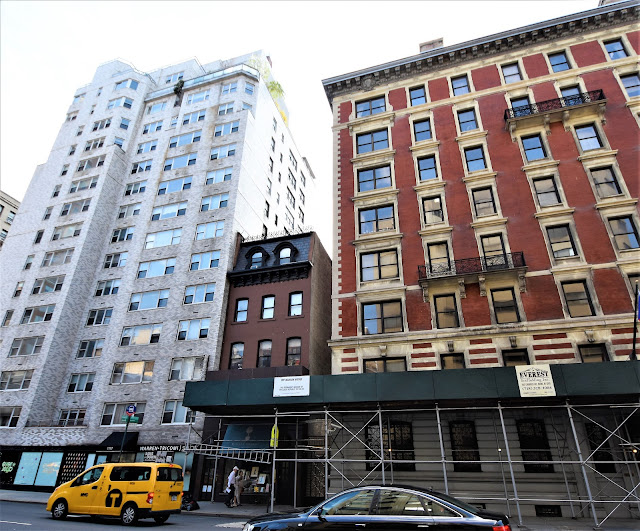 The storefront today wears a polished granite facade that apparently attempts to match the original brownstone.  The architectural details of the upper floor openings have been shaved flat.  But the glorious mansard and cornice--right down to the slate shingles and cresting--magically survive as if preserved in amber.