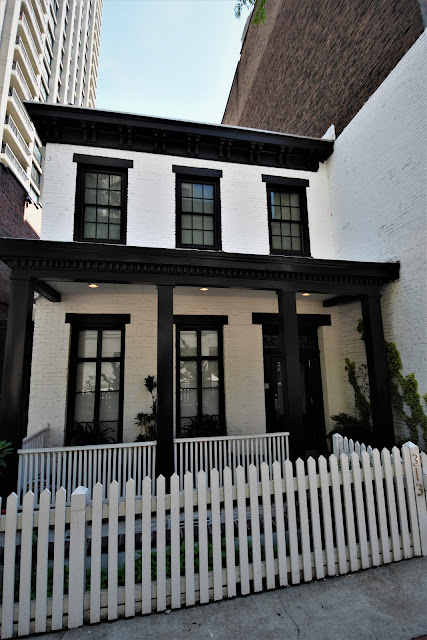 In the 18th century the area near the East River around what would become 58th Street was lonely.  Travelers using the Eastern Post Road could stop at the inn called The Union Flag (the name of which referred, of course, to the British colors, not the later American union).  The tavern sat approximately where the approach to the Queensboro Bridge is today.

But the decade prior to the Civil War saw the beginnings of development as streets were laid out and building plots sold.  In 1856 builder and mason Hiram G. Disbrow began construction on his own modest home at what would later be numbered 313 East 58th Street.  Simultaneously Charles Shute Pell erected a similar house on the lot next door.

Disbrow's home was completed in 1857.   He had no doubt acted as his own architect and the two-story tall structure made no attempts at ostentation.  Described as "vernacular" in style today, it exhibited some elements of the Greek Revival style in the doorway and bracketed cornice, for instance.  The parlor openings were, in fact, French doors.  They were less practical as access to the wooden porch than for adding ventilation into the house during hot summer months.

Disbrow was a partner with George Whitefield in the building firm of Disbrow & Whitefield.  A daughter, Emma, was born to him and his wife, Catherine on February 20, 1860.  By the time the toddler tragically died on March 30, 1862, the family had moved to No. 165 East 50th Street.

An interesting side note is that in 1899 the aging Hiram G. Disbrow patented an invention far afield from the building business.  His "reversible tie" was described as having "sides of different color or material."  For the price of one tie, the customer would get two.

In the mid-1890s James Jordan, "dealer in window-shades, and carpets, &c." lived in No. 313.  His next door neighbor, at No. 311, was the Prussian-born merchant Mathias Down.  Down had owned that house since 1877 and now his grandson, Herman Weiden, lived there as well.

Down died before 1920 and at some point Weiden purchased No. 311 as well.   By now not only had apartment buildings closed in around the houses; but the massive Queensboro Bridge had wiped out much of the old neighborhood.  Its approach was mere yards from the properties.

The end of the line for the quaint anachronisms seemed near in April 1928.  On April 28 real estate operator and builder Milton Barkin, of Samuel Barkin & Sons, purchased Nos. 311 and 313 "from the Weiden estate," as reported in the newspapers (Herman Weiden was, incidentally, very much alive).  The New York Times reported on September 13 the firm's intention to build "a nine-story apartment house at 311-313 East Fifty-eighth Street."


But something happened with the ambitious project.  The Weidens never relinquished title to No. 311 and No. 313 was purchased as the headquarters for the Humane Society of New York.   Mae Colbert Liotta, executive secretary and assistant to the president of the Society, lived in the upper portion of the house with her widowed mother, Margaret Colbert.

Large fund raising events for the Humane Society of New York rarely took place from the house (the benefit dinner and dance at the Waldorf-Astoria in 1935, for instance, lured patrons with names like Morgan, Dodge, Armour, and Roosevelt).  But it was the scene of one especially anticipated annual event--the Christmas party for children and their pets.

The event was no small affair, especially for pets and children.  On December 25, 1935 The New York Times reported "The party, which lasted an hour and a half, got underway with the playing of marches by members of the Kips Bay Boy Scouts, Troop 472, whose bugles and drums attracted a crowd to the Christmas tree erected at the front door of the society's building.

"Pets were brought in their best regalia, some with yellow ribbons and furbished leather harness.  One woman carried her cat in a crate usually used to ship oranges."

One man that year even brought his two white mice.  The Santa Claus was ready for more expected pets like dogs and cats, and his sack was filled with gifts of collars, blankets, leashes and food.  The mice sent workers scurrying.  "They received pieces of cheese and crackers," said the article.

A second Santa suit, right down to the long white beard, was worn by Paddy Reilly who made a special appearance.  He was the mascot terrier of the Society and lived in the house.  He received two loving cups during that event.  One was for saving the life of a woman in Jamaica Bay.  He barked until a passing boater heard him and plucked her from the water.  The other was from "an admirer" who was impressed with Paddy's help in raising $3,600 that year.   He routinely strolled the city streets with a money cup on his back "seeking aid for dumb animals," as described by The Times.

Two years later Paddy Reilly would add a special honor to his growing collection of medals "for his bravery and devotion."   Artist Helen Stotesbury visited the 58th Street headquarters where the terrier sat for his oil portrait.  Stotesbury was the daughter of Brigadier General Louis W. Stotesbury, president of the Humane Society.  She proclaimed Paddy "the best subject she ever had."  The portrait was sold to benefit the organization at the dog's 17th birthday party the following week.


Margaret Colbert died on October 22, 1938.  As had been the practice in the house in the 19th century, her funeral was held here several days later.


Mae Colbert Liotta continued to live on the second floor.  She threw herself into the Society's work, organizing and heading its street displays, free clinic, courses in animal care and other activities.  On December 13, 1943, for instance, she announced through the newspapers that anyone who called at the 58th Street house that day with a horse and wagon would be given a free horse blanket.

Exactly one week later Mae was working on the upcoming Christmas Party at her desk when she was seized with a heart attack.  She died later that afternoon at Flower Fifth Avenue Hospital at the age of 53.

The Humane Society of New York continued to operate from the house for three more decades.  In 1952 when the State passed the Metcalf-Hatch Animal Research Bill, authorizing the "turning over of stray dogs and cats to laboratories and institutions for experiments," it was the scene of dissent.  The New York Times reported on February 13 "The 100-year old green-and-white clapboard cottage at 313 East Fifty-eighth Street, housing the Humane Society of New York was the scene of a protest meeting yesterday." 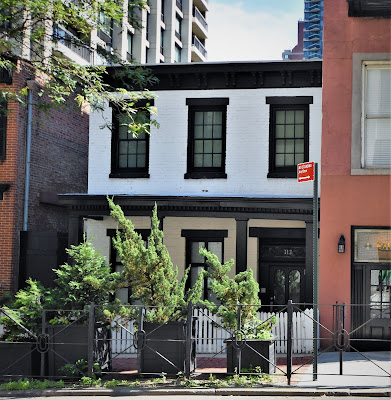 The Humane Society of New York moved to its new headquarters in 1974.  The East 58th Street building was purchased by Paul Steindler and his wife, Aja.  Steindler had fled his native Czechoslovakia during the 1945 Communist takeover.  He was at that time an Olympic wrestler and Aja was the world ice skating champion.  By now the couple had given up athletics to become restaurateurs.

Thankfully, No. 313 had been named a New York City landmark in 1970.  While designation did not protect the interior details, it safeguarded the exterior.

The New York Times food critic Craig Claiborne explained on September 8, 1976 "[Steindler] has gutted the building and excavated a basement.  When it is transformed into a restaurant, tentatively named Paul's Landmark, it will have an inner dining room with a seating capacity of 85, plus a patio."

Considering using the word "landmark" in the name was ironic since Steindler wiped out the interior architectural history of the structure.  Instead, the restaurant was named The Czech Pavillion.  A 1979 advertisement touted "Classic Czech cooking...Charming...Townhouse Atmosphere" and offered "Enjoy piano music of the Old World nightly in the Skylight Room."

Although the building was still owned by the Steindlers, in 1981 The Czech Pavillion became Le Club, described by a newspaper as "the disco for New York's power elite."  In 1989 the club's director, Patrick Shield reminded a New York Magazine reporter that "party animals like F. Ross Johnson, Donald Trump, Ronald O. Perelman, Henry Kravis, and Saul Steinberg" haunted Le Club "three and four nights a week, with the most magnificent girls.  They were swinging."

When Le Club moved out late in 1996, Aja Steindler (Paul had died in 1983) leased the house to Rocco Ancarola, owner of Cafe Boom in Soho.  He announced plans to open a new restaurant, Two Rooms, with a formal dining room on the ground floor and cafe and lounge on the second.  That project lasted only until spring of 1999.

Now it became The Landmark Club, "a restaurant, not a club."  The owner, Shamsher Wadud who also operated the restaurant Nirvana, was quick to point out to food critic Florence Fabricant "Only the exterior of the building, built in the 1850s as a residence, is a city landmark."

Finally, in 2010 artist John Ransom Phillips purchased the 154-year old house as his residence and studio for around $4.7 million.  Ironically it was the absence of the 19th century interior elements that attracted him.   Joyce Cohen, writing in The New York Times on November 19, 2010 explained "When Mr. Phillips saw the former dance floor, with two skylights--one of them with 16 glass panels in a vaulted ceiling--he began to see possibilities." 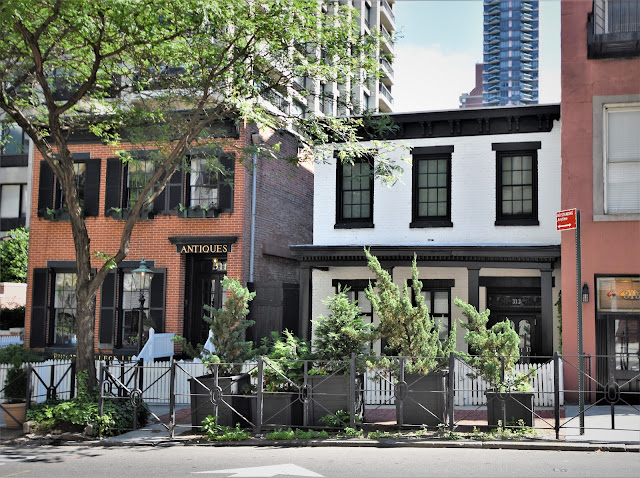 In 1970 Adolf K. Placzek of the Columbia University's Avery Arrchitectural Library perfectly described Hiram G. Disbrow's charming residence as "a little gem of human proportion."  Against all odds it, along with the Pell house next door, survives on the busy street, mostly ignored by the motorists intent on accessing the Queensboro Bridge.