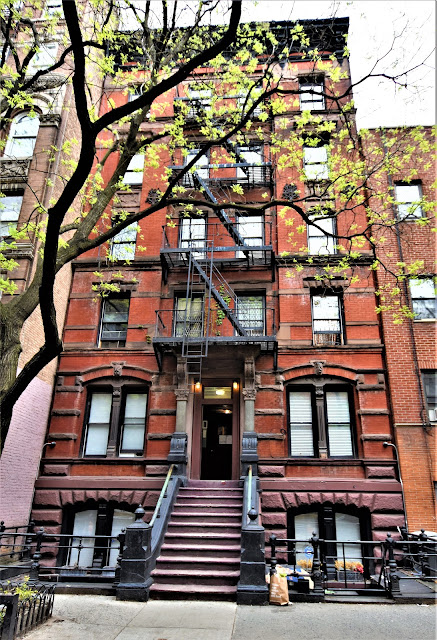 By the mid 1880s apartment house living had extended beyond crowded tenements.  "Flats" were being erected as housing not only for working class families; but also for the well-to-do.   At No. 25 Grove Street sat an old house typical for that section of Greenwich Village, formerly part of the Herring family's farm.  In the 1840s it had been home to School Board commissioner David E. Wheeler.

Developers George Rothmann and Ferdinand A. Sieghardt purchased the house and commissioned architects Berger & Baylies to replace it with a modern apartment building.  Richard Berger and Franklin Baylies had worked together in the office of prolific architect Griffith Thomas.  Not long after his death in 1879, they partnered; essentially taking over their former employer's practice.  An advertisement on May 20, 1882 noted "We have in our possession all of the drawings and specifications of buildings erected by Griffith Thomas, architect, which can be seen upon application."

The building, completed in 1886, cost $24,000 to construct--about $625,000 today.  It rose five stories above a full-height basement level.  The architects blended a brooding take on Romanesque Revival with neo-Grec elements--the incised decorations and square-headed lintels, for instance.  The basement was clad in rough-cut brownstone while the upper floors wore red brick trimmed in stone.  The last word in domestic architecture at the time, the weighty stone newels and iron railings, the ponderous entrance and somber carved decorations give a more forbidding feel to the building today. 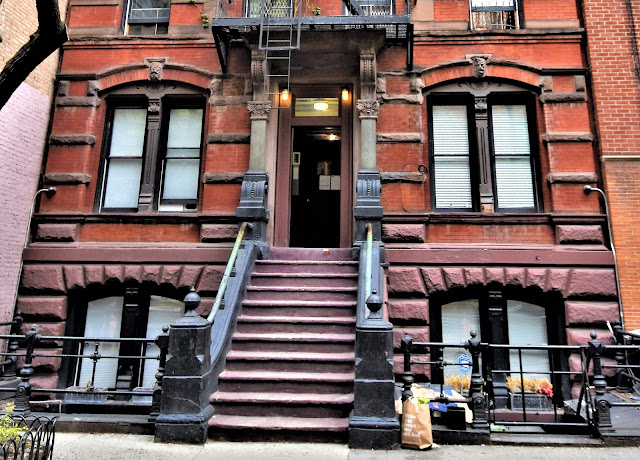 The apartments--four per floor--filled mostly with white collar professionals.  Among the first was James G. Beach, who had previously lived above his Beach Pharmacy in the converted house at No. 533 Hudson Street.   Born in 1841, he enlisted in the Union Army towards the end of the Civil War, but according to The New York Times, "was soon mustered out of service."

In 1864 he opened his drugstore, which became a fixture in the neighborhood.  In 1891 the  History and Commerce of New York noted that he carried "a full line of drugs, patent medicines, chemicals and fancy articles being always on hand."

Among the patent medicines he carried was Paine's Celery Compound.  When The Evening World prepared a full-page article on "the wonderful remedy," it sent a reporter to the Beach Pharmacy in April 1894.  Beach's commendation would probably raise eyebrows today.  "I don't know what its ingredients are, but I do know that it sells better than any other proprietary medicine there is on the market.  It is an excellent remedy."

The History and Commerce of New York called Beach "a druggist of the widest range of experience and long practice, and is a graduate of the New York College of Pharmacy, and holds a certificate from the Board of Examination."

Early in 1898 Beach's health began to fail.  Finally in May he was forced to retire.  The unmarried druggist died in his Grove Street apartment five months later, at the age of 57. 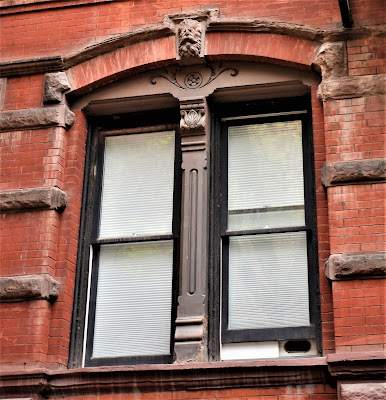 Another of the early residents was George H. Schweitzer, the bookkeeper for Bartholomew Gray who ran a delivery company on Centre Street.  Schweitzer's professionalism and integrity were questioned during a City investigation of corruption in the the newly opened West Washington Street Market.

Vendor complaints exposed graft and bribery in the allocation of stalls.  Fish, produce and other dealers found themselves unable to obtain selling space without paying off certain officials.  One of those officials was Deputy Collector of City Revenue, David Barnett.

Schweitzer's employer had two stands in the market.  The bookkeeper was put on the stand to testify before the Commissioners of Accounts on March 17, 1889.  His seemingly nervous testimony did not help either his own reputation nor Barnett's case.

The Evening World reported "Schweitzer said that he had paid $137 for fitting up the stands.  He afterwards modified this statement by saying that Mr. Gray, his employer, paid the money to Barnett, who was requested to fit up the stands."

Schweitzer was asked to point out the transaction in his ledgers.  But there was no documentation of the payment.  "It was a cash deal," he explained.  The World noted "This is looked upon as a peculiar proceeding by the Commissioners, who have evidence to the effect that not one hook has [been] driven into the stands allotted to Schweitzer, and no attempt made to fit them up, notwithstanding this payment to an official of the Finance Department for the alleged purpose of making them ready for occupancy."


The O'Connor family lived at No. 25 Grove Street as the First World War broke out in Europe.  But it would be another battle that affected them in 1916.   The city was struck by devastating epidemic that year--poliomyletis, or infantile paralysis, better known as polio.

The disease caught doctors unaware, giving it a foothold.  Dr. Abraham Zingher of the Willard Parker Hospital explained on September 3 that year that "so little did the average practitioner know about poliomyelitis at the beginning of the present sweep of the scourge that many cases were treated as summer complaint or other common illness for several days before unmistakable symptoms of paralysis began to manifest themselves."

On September 4 the New-York Tribune ran that frightening headline "Experts Train Private Doctors to Curb Plague."  The same day the New York Times reported "The 8,197 cases to date...make this epidemic of the disease the largest ever recorded, and the 1,988 deaths give it one of the highest mortality rates on record."

Sadly, one of those deaths was little Agnes O'Connor, at No. 25 Grove Street.


Around the World War I years the building was sold three times, the last being to "a Mr. Birnbaum" for $42,000--about $575,000 in today's dollars and a noticeable decrease in value.

When war broke out in Europe again, young men from Greenwich Village shipped off to fight; many of them injured or killed.  Two of them lived at No. 25 Grove Street.  Private Frank P. Sposado's wife, Bernice, received word that he was injured in battle in January 1945.  Two months later, First Lieutenant Michael J. Green was wounded.   He lived here with his wife, Teresa.  Frank Sposado returned to duty, only to be wounded again in May.

Long a center of the arts and free-minded thinking, Greenwich Village was a hot spot of political and social activists beginning in the 1960s.  One resident of No. 25 Grove Street, Roger Smith, protested the Vietnam War through music.  City officials, it turned out, were not a fan of folk music.

On April 9, 1961 Smith and four others were arrested in Washington Square Park for violating a ban on folk singing.  The ban "against folk singing and guitar playing" was limited to Washington Square and had been recently issued by Parks Commissioner Newbold Morris.  The arrests provided impetus in part for the 2,000-member protest in the park on April 30, which resulted in further arrests and, according to The New York Times, near riots.

Another Grove Street resident went far beyond folk singing to make her protests clear.  Dianne Donghi was a member of the Students for a Democratic Society and the terrorist group, the Weathermen.  In July 1969 she traveled with Bernardine Dohrn to Havana to meet with Cuban officials.

On April 15, 1970 Donghi was arraigned with two other Weathermen, charged with conspiracy to plant bombs.  Described by The Times as "a thin, blonde girl," she was released on $15,000 bail on April 24; but was arrested the next day on charges of being a fugitive from justice in Illinois "where she was being sought for her alleged involvement in a bomb factory." 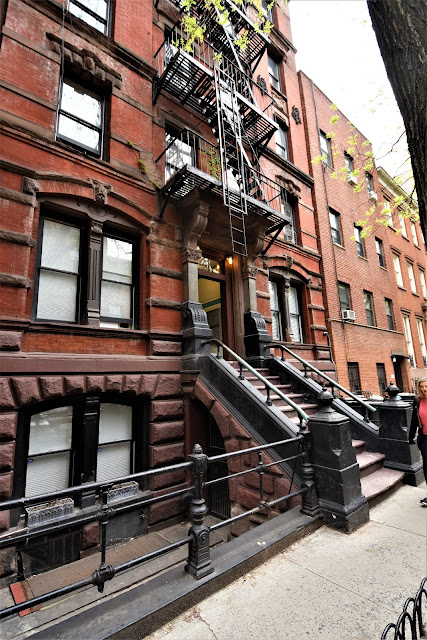 Berger & Baylies's somber building still has four apartments per floor.  Its somewhat grim presence is heightened by the regrettable damage caused by 130 years of weathering.  Its wonderfully unique personality on the block is, however, undeniable.