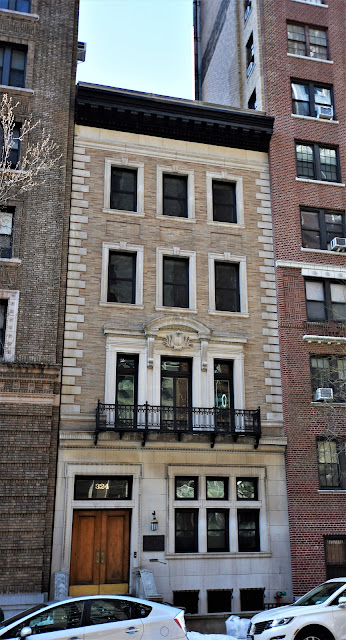 In 1890, in one sweeping deal, millionaire William E. D. Stokes teamed with contractors Squire & Whipple to build 32 upscale homes--21 of them on West 86th Street and 11 on West 72nd.  The project was additionally unusual in that the residences were not in long, continuous rows; but splattered about in groups of four, two or even one.

Among these seems to have been No. 324 West 86th Street, between Riverside Drive and West End Avenue.  The prim four-story neo-Renaissance design of beige brick and stone was a restrained exception to the often more fanciful architecture of Upper West Side rowhouses.  But its proper demeanor was the perfect setting for its decidedly academic owner, Edwin Robert Anderson Seligman.

One of nine children born to millionaire bank and businessman Joseph Seligman, he had graduated from Columbia University in 1879, then studied throughout Europe--at the universities of Berlin, Geneva, Paris and Heidelberg.  He married Caroline Beer in 1888 and the couple would have three daughters and one son.

Seligman was appointed Professor of Political Economy and Finance at Columbia in 1891.  Among America's foremost minds in matters of economics, he was editor of the Political Science Quarterly, and wrote authoritative books including Essays in Taxation, The Shifting and Incidence of Taxation, Progressive Taxation, and Railway Tariffs.

The Seligman house was rarely the scene of glittering entertainments.  It was more often the scene of serious discussion.  Seligman was the president of the Tenement House Building Co. and chairman of the committee on education of the Educational Alliance.  His interests were not totally dry and academic, however.  He was also a member of the Metropolitan Museum of Art, the American School of Classical Studies at Rome, and the American Historical Society.

The Seligman children were raised in an atmosphere of privilege and sophistication.   Violet, who was born in 1900, went off to the exclusive Bryn Mawr women's college in the fall of 1917--the same year that a measles epidemic broke out nationwide.   Considered more of an annoyance today, measles was a dangerous disease, often worsening to broncho- or lobar-pneumonia.   That year the United State Army alone reported 47,573 cases among its troops; and 947 patients across the U.S. died.

In March 1918 Violet contracted the measles, which then complicated into pneumonia.  The 18-year old freshman died at the college in April.

Afterward, life in the Seligman home was happily without incident until January 27, 1926.  Edwin had been ill for a few days, so he was resting in his bedroom that evening while Caroline and their youngest daughter had dinner.  Afterward, at around 7:30, Caroline went up to her bedroom "to prepare a table with gifts for her daughter's birthday celebration" which was the next day.

Among the gifts she went to gather up was a pricey pearl necklace.  When she opened her bureau drawer, she was panicked to see the necklace was gone.  She told investigators "Then I noticed that the bathroom widow was open, and I realized what had happened."

What had happened was that a gutsy burglar had climbed onto the roof of Edwin's study, which projected out in the rear, then pushed the bathroom window open and slipped in.  With Edwin in the bedroom next door, he rifled through Caroline's drawers, taking away her jewelry box with approximately $8,000 of jewelry (about $107,000 today), Edwin's watch, cash, and bank notes.

The former Seligman house would never again be a residence.  In the mid-1940s it became home to the Young Men's Philanthropic League, headed by Jack Wasserman.  The group would remain here until moving to 18th Street in 1955.

Its continued use by various institutions had saved the structure from being replaced by the looming modern apartment buildings that now lined the block.  In the fall of 1976 a radically different group took over the house, the Siddha Yoga Dham of New York.

New York Magazine explained on March 28, 1977, "Siddha Yoga attempts to awaken the dormant kundalini (divine energy) in disciples through the grade of the Siddha guru."   The guru on West 86th Street was Baba Muktanda, described in the article as "the most charismatic, compelling guru to grace the West with his prescience."

Today the Siddha Ashram continues to operated here, part of the Syda Foundation.  In their 2000 book Spiritual Places In and Around New York City, authors Len Belzer and Emily Squires said "Over the years, we have visited the Siddha Ashram on West 86th Street where enthusiastic followers sang out chants, spoke of their beliefs, and meditated together, all in heavenly rooms with carpeted floors, flickering candles, and worshipful pictures of the Siddha lineage."

Very little has outwardly changed to No. 324 West 86th Street.  Only a discreet metal plaque near the stoop announces the presence of the Siddha Ashram.  The Seligman house is one of the two surviving mansions among the row of apartments.