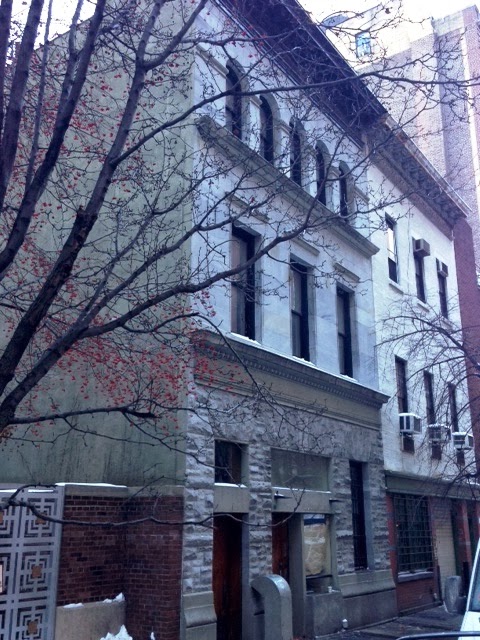 On August 9, 1895 builder-architects McCafferty & Buckley filed plans for a “three story brick stable and dwelling” to be erected at No. 111 East 77th Street.  Robert W. Buckley and Robert McCafferty had already been busy in the rapidly-developing area; putting up rows of townhouses and corresponding carriage houses.


Their choice of location made sense.  Sitting between Fourth Avenue (later named Park Avenue) and Lexington Avenue, it was close enough to the fine homes near Central Park to be convenient; yet far enough away that wealthy homeowners were not offended by noises and smells.  Similar carriage houses were appearing on the north side of the block; while on across the street was the nurses’ training school of the German Hospital and Dispensary.


The architects estimated the cost of the proposed structure at $18,000—about half a million today.  That figure may have risen when the intended brick façade became instead stone.  The handsome gray graining of the planar block of the upper floors suggests marble rather than the more expected granite or limestone.


McCafferty & Buckley’s carriage house “and dwelling” was completed the following year.  It was an income producing property for the partners and they retained ownership for four years.  And while similar structures housed stable-related employees on the upper floors, rooms in the building at No. 111 were leased to a variety of tenants of meager means.  As the 19th century rolled over to the 20th, only one occupant held a carriage occupation—apprentice coachman George H. Thompson (just 16 years old).


All of the residents were black, born in the US, except Irish immigrant Ellen McCarty who made her living as a laundress.  The other three women in the building were also laundresses; and there was one valet.


On October 3, 1900, about three months after the census-taker recorded the mix of residents, The New York Times reported that McCafferty & Buckley had sold the “three-story private stable” to Edward R. Wharton.   The wealthy Wharton who lived nearby at No. 884 Park Avenue at 78th Street paid a hefty $36,000 for the stable.


In 1885 he had married the former Edith Newbold Jones in a fashionable society wedding.  Wharton relished the whirlwind of social seasons in Newport and Europe; in stark contrast to his wife who disdained the conspicuous consumption and inane lifestyle of her staggeringly-wealthy peers.


For about a decade following her marriage Edith Wharton published poems and short stories; although Edward was mainly unimpressed with her avocation.  By the time the carriage house was purchased, Edith was seeing some recognition as a writer.  In 1897 she had begun writing The Decoration of Houses and two years later The Greater Inclination, a collection of short stories was published. 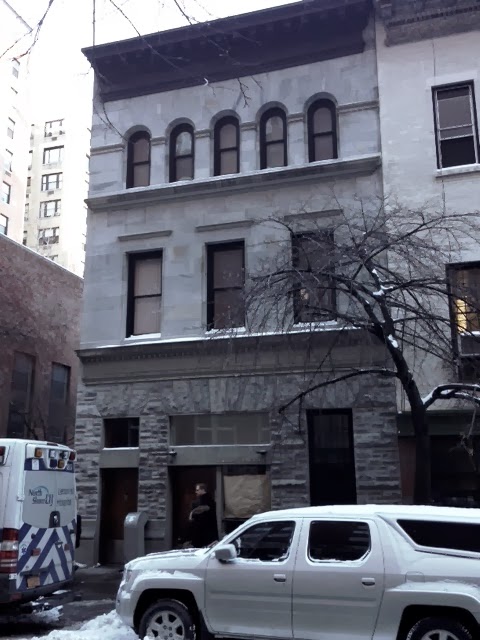 The deed to the 77th Street carriage house was apparently transferred to Edith’s name.  On November 13, 1903 The New York Times reported that Edith Wharton had leased the stable to Edward T. H. Talmage.


Talmage lived at No. 969 Park Avenue at 82nd Street.  His passion for golf led to his co-founding the Somerset Hills Country Club in Bernardsville, New Jersey in 1894.  The Talmages maintained a 400-acre estate in New Jersey known as “Woodmere Farms.”


Edward Talmage used the carriage house for only a year.  In 1904 Edith Wharton sold it to Francis Burton Harrison and his wife.  Mary Burton Harrison was the former Mary Crocker, daughter of Colonel Charles Fred Crocker of San Francisco, and heiress to the Crocker Bank and railroad fortunes.


The Harrisons had been married four years earlier.  Mary’s personal wealth rivaled that of her husband and Some Prominent Virginia Families noted that under Crocker’s will “the daughter received a large fortune.”  Her portion of the estate was about $5 million.


The year that Harrison purchased the carriage house he received the nomination for Lieutenant Governor at the Democratic State Convention.  The following year he was elected to Congress.  The couple lived at No. 876 Fifth Avenue across from Central Park.


Although their coachman lived above the stable, evincing that the building was still used for horses and carriages; the Harrisons owned motorcars, too, and a garage was maintained on West 58th Street.  On November 25, 1905 tragedy struck when Mary was motoring in Long Island City.   Her brother, Charles T. Crocker who was studying at Yale, and two friends from San Francisco, Mr. and Mrs. Laurence I. Scott, were visiting and the party was on their way to Hempstead Colony, Long Island.


As the limousine headed down Thompson’s Hill (deemed by a newspaper as “a favorite speedway for automobiles"), Scott and Crocker were examining a road map while Mary and Mrs. Scott were talking and laughing.  The chauffeur, Constant Ravert, turned and said that something was wrong with the steering gear.


According to the Baltimore Sun, “The next instant the machine swerved sharply.  The chauffeur’s frantic efforts to guide it back into the road were fruitless and the car plunged toward a ditch at the side of the road, with a telegraph pole booming directly in its course.  It struck the pole a glancing blow and then toppled into the ditch.”


Mary Burton Harrison was thrown under the car, her head pinned down by the vehicle.  Her neck was broken.  The Baltimore Sun reported “Former Congressman Harrison was grief stricken to-night, remaining at the hospital with the body of his wife.”


Harrison would hold on to the 77th Street carriage house for years as his political stature grew.  Unfortunately, so did his less-than-sterling reputation.  According to historian Robert A. Fulton in his Moroland, 1899-1906, “Handsome, rich, and powerful, Harrison also gained a deserved and less-savory reputation as an aggressive ladies man who targeted other men’s wives, particularly attractive spouses of those equally rich and powerful.  He went through six marriages in his lifetime, four ending in divorce.”


In the meantime, the German Hospital and Dispensary moved its facility in 1905 from the Lower East Side to the block where its nursing school had stood for decades.  As the United States entered World War I, a name change was deemed advisable to distance the hospital from the enemy abroad.  In July 1918 the medical facility directly across the street from the Harrison carriage house was renamed Lenox Hill Hospital.


In 1920 Francis Burton Harrison sold the contents of the Fifth Avenue mansion.  On March 13 the public was invited to the American Art Galleries to view the “costly antique and modern furniture, Oriental rugs and other objects of household embellishment and utility belonging to the estate of the late Mrs. Mary Burton Harrison.”  The following year, on April 21, 1921, he sold “the three-story garage” to Amy H. Weatherbee.


Amy was the widow of Edwin H. Weatherbee, the former head of the dry goods firm Arnold, Constable & Co.  Weatherbee’s position with the emporium was no doubt influenced by the fact that his wife was the daughter of Arnold Constable.  The Weatherbees had been highly conspicuous in society.  Until his death in 1912 Edwin bred and raced thoroughbreds and was a member of the Chamber of Commerce, New York yacht Club, Riding Club, Metropolitan Club, Union League and the Yale Club.


Throughout the 20th century the block of 77th Street between Lexington and Park Avenues changed greatly.  Lenox Hill Hospital expanded and enlarged until it engulfed the entire block across the street.  And yet the three-story carriage house remained essentially unchanged above the ground floor.


Today the picturesque little building is part of Lenox Hill Hospital—an unlikely survivor of a time when an emerging literary giant housed her horses and elegant carriages here.
photographs taken by the author
Posted by Tom Miller at 3:19 AM