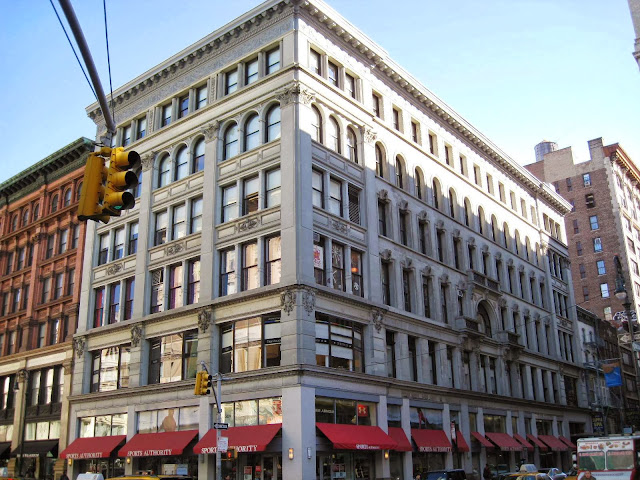 Twenty-six year old Andrew Alexander opened his first shoe store on Eighth Avenue in 1857.  As the better residential areas inched northward along Fifth Avenue and to the east, the Scotch-Irish merchant recognized the retail potential of just a block to the west.  Later the Christian Nation would recall “He was among the first to note the tendency of the retail trade toward Sixth Avenue.”


In 1877 he relocated to the northwest corner of 23rd Street and Sixth Avenue at the northern fringe of what would soon be called The Ladies’ Mile.  Eleven blocks to the south, at Sixth Avenue and 12th Street, was the shoe store of Alexander’s greatest competitor—Alfred J. Cammeyer.


By the beginning of the 1890s Sixth Avenue from 14th Street to 23rd Street was lined with mammoth emporiums catering to New York’s carriage trade.  In September 1893 Cammeyer moved squarely into the fashionable shopping area, taking over the newly-built structure on 6th Avenue and the southeast corner of 20th Street.  The New York Times called it “probably the largest and best equipped boot and shoe establishment in this country, if not the world.”


Andrew Alexander would not be long in answering the challenge.  Developers Lachman, Morgenthau & Goldsmith purchased and demolished a row of seven brick rowhouses along West 19th Street, reaching to the corner of Sixth Avenue.  Late in 1896 their new retail structure was completed--filling the southern half of the block where the Cammeyer Building stood.  Designed by Buchman & Deisler, it was a dignified neo-Renaissance building faced in limestone and brick.  Expansive show windows at the second floor ensured that attractive merchandise caught the eye of female shoppers passing along on the 6th Avenue El.


On February 5, 1897 The New York Times reported that Andrew Alexander had purchased the new building and “will take possession on March 1.”  Alexander declined to tell reporters the price he paid for the structure; but the newspaper took notice of the abutting monster shoe stores.  “He intends to abandon his old stand, at Twenty-third Street and Sixth Avenue, where he has been for twenty years, and to remove his entire stock to this new building, occupying the entire ground floor and basement.  Thus that entire block will be given over to the shoe trade.”


The building, now known as the Alexander Building, was “rated as a fire-proof structure.”  Two years after moving in, that rating would be tested.


Around 9:00 on the evening of January 18, 1899 defective insulation of electrical wires in the adjoining Cammeyer building sparked a fire in the basement.  By the time fire equipment could arrive, the blaze had spread to what The Times called an “inferno” and the store was nearly destroyed.


Andrew Alexander rushed to the scene around midnight.  “He said there was a four-foot brick wall between his building and the one on fire,” reported the newspaper, “and he did not expect to lose at all, unless in a small way from water.”  Surely enough, while Alfred Cammeyer suffered half a million dollars in damages (around $11 million today); the Alexander Building was unscathed.

Alexander was a religious and socially-conscious man.  He would serve as an elder in the Reformed Presbyterian Church on 39th Street for nearly 50 years, was an active Sunday school worker, and a board member on the church’s Foreign Missions and Church Erection committees.  He was a member of the Board of Directors of the National Temperance Society and a member of the Presbyterian Union of New York.  His concern for his fellow man extended to his employees.


That concern manifested itself on the night of March 12, 1901.  Just as the emporiums of Sixth Avenue were closing for the night, a well-dressed woman was seen staggering along the avenue at 15th Street.  A large crowd of unruly boys jeered and shoved her and, as she reached the corner of 19th Street, she lost her balance and fell headlong on to the pavement.


William Parsons was a salesman at Alexander’s and he witnessed the woman’s fall.  Several people on the crowded avenue tried to help her, including Parsons.  As they were attempting to get her to her feet, rookie Policeman Neil Brown arrived on the scene.


The Times reported “Swinging his club as he shouldered his way, he ordered the crowd to clear away.  Most of them did so, but Parsons lingered for a moment.  Then it is said Brown grabbed him by the coat, hurled him out to the curb, and struck him twice on the head with his club.  Parsons protested, and for answer the policeman struck him again and pushed him back into the crowd.”


The last blow knocked Parsons unconscious and “cries of ‘Brute’ and ‘Shame’ went up from the crowd.”


Brown, who had only six months on the force, was enraged by the reaction of the throng of shoppers.  He “went at the crowd, striking men over the head, face, and arms, and striking women in the face, until the people ran in all directions, leaving him the master of the entire block.”


By now Parsons had regained consciousness and was on his feet.  The woman was still unconscious on the sidewalk when the patrol wagon arrived.  Both the woman and Parsons were loaded into the wagon and as it drove off, the crowd of infuriated witnesses and victims ran behind it.  When the wagon arrived at the station house and discharged its involuntary passengers, there was a mob of no fewer than 500 persons on the street and in the police station, according to newspaper accounts.


“There were groans and hisses from those in the room and louder noises from those without as the policeman brought in the man and woman,” said The Times.


The woman was deemed “to be utterly stupefied with drink, and she was dragged to a cell until she should be sober enough to give her name.”  Despite the hoards of protestors, Sergeant Murtha locked up the bruised William Parsons as well on the charge of interfering with an officer in the performance of his duty.  A doctor from the New York Hospital was called to dress his wounds.


While the angry crowd refused to leave the street in front of the station house; a long row of victims issued formal complaints against Officer Brown.  In the meantime Andrew Alexander had heard of the plight of his Good Samaritan employee.  He left his home at No. 14 West 47th Street and furnished bail for the battered salesman.


In June 1903 Andrew Alexander attended a church synod in Hopkinston, Iowa.  On July 29, as he was aboard a train heading back to New York City, he was stricken with what was most likely a heart attack.  He never recovered and on July 29 the 72-year old shoe merchant died.  His funeral was held in the 47th Street house a few days later.


Alexander’s will, probated a week later, reflected his charitable nature.  His estate was estimated to be around $3 million and he left substantial amounts to Presbyterian causes and $5,000 to the Board of Trustees for Indian Missions.  Interestingly, while he left $750 to his sister; he left $1,000 to one of the house servants, Margaret Lindsay.


Along with his widow, Matilda, only two daughters of his six children survived.  His will requested “that they continue his business.”


The business did, indeed, continue and in 1911 a second store, on Fifth Avenue, was opened.

In August 1915 a reporter for Boot and Shoe Recorder stopped by the store to see its end-of-season sale items.  “Mr. Bemis, the manager of the business, which is owned by the two daughters of the late Alfred Alexander, told me that the season now closing had been fairly satisfactory, trade keeping up well until the first of the month, while the present clearance sale was well patronized.”


Bemis did not seem to have an acute merchandising strategy.  “In women’s lines we don’t know what women will want.  We buy a few of what we think they will like, and if they go, we order more.  If they don’t sell, we’re stuck, that’s all.”


The manager blamed the unpredictability of shoe fashions on his female customers.  “Women’s tastes are so fickle that only after the season is fairly opened can we tell what they will decide upon.  But of one thing I am certain, styles will be quieter.”


Earlier that year a writer for the New-York Tribune commented on the Spring styles.  “Here I saw women’s Colonial pumps in patent colt, with medium heavy soles, especially priced at $3.  These can be had for the same price in gun metal kid.  Oxford ties with gun metal vamps and inlay sand colored backs are also $3.”  Shoppers were spending the equivalent of about $50 today on the stylish shoes.


The article reinforced the fact that Edwardian women had a broad range of shoe styles from which to choose.  “The ‘Court’ pump, a copy of one of the new smart models, has gray cloth back and gun metal vamp and is moderately priced at $3.  A specially reduced high boot has dull or patent vamp and smart dark gray top, with leather trimmings—laced--$4.35.  Satin dancing slippers in the usual evening shades cost $3.”


Five years after the Tribune article, prices had not risen appreciably.  Boot and Shoe Recorder noted that the Sixth Avenue store offered “At $3.65 a pair, pretty slippers in colored satins; at $4.85, beaded slippers—black, white and bronze; also gold and silver cloth—all with Louis heels; and some at $4.85—oxfords for street wear.  Black and brown calf with Cuban heels.  Dull black kid and patent leather with Louis heels—all sizes in this lot.”


While nearly all of the great retailers abandoned the Ladies’ Mile for Fifth and Madison Avenues; Alexander’s would sell shoes from the Alexander Building well into the 1920s.  In 1924, after daughter Isabel Alexander Robey sold the building to the Sixth Avenue Leasing Corp., architect Herman Wolf was hired to redesign the first floor storefront.  Then in 1937 the buildings of the former shoe rivals—Cammeyer and Alexander—were joined internally.


The stretch of Sixth Avenue fell into neglect during the middle to latter parts of the 20th century as the grand emporiums were turned into factory and small office space.  A rediscovery of the district finally came and in 1993 the Alexander Building was renovated into four floors of photo studios and offices; with a billiard parlor and lounge on the first floor.
In 2010 the Cammeyer Building was converted to 67 residential condominiums; once again separated from the Alexander Building.  A year later William Macklowe purchased the Alexander Building for $45.2 million.  Renovations continue on the building and although the street level has been obliterated, the distinguished façade above is mostly intact.  Where Edwardian women with fickle taste for footwear shopped in 1915, 21st century sports enthusiasts browse through running shoes, shorts and tee-shirts.
Posted by Tom Miller at 4:47 AM