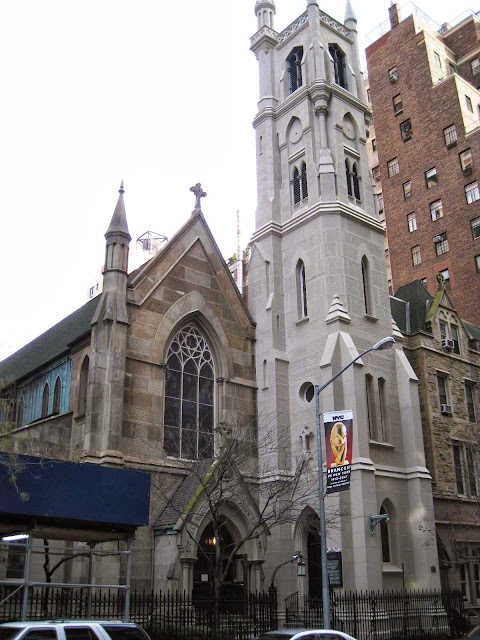 John H. Talman was 88 years old when he died in 1865 “possessed of great wealth acquired by successful Wall-street and real estate operations,” as noted in The New York Times.  When his widow, Sarah Somarindyck Talman, died two years later that fortune passed to the couple’s unmarried daughter, Caroline.  The newspaper would later remark “The great bulk of his property has fallen into the worthy hands of Miss Caroline, his only surviving daughter, by whom it is being mainly devoted to lasting works of piety and benevolence.”


Recognizing the wealthy woman’s “piety and benevolence,” Episcopal minister Rev. Isaac Tuttle approached her with a proposal in 1870.  Plans were underway to move St. Luke’s Home for Aged Ladies from Greenwich Village to the sparsely-developed Upper East Side.  The elderly women, Rev. Tuttle explained to Caroline Talman, would have no place in which to worship.


Caroline loosened her purse strings and in June 1870 construction began.  A little over four months later The Times reported that “The corner-stone of the Talman Memorial Church of the Beloved Disciple and Home for Indigent Females was laid yesterday, at the corner of Madison-avenue and Eighty-ninth-street, with all the solemn impressiveness of the Episcopalian ritual.”  Caroline intended the church to be a memorial to her father.


Both the Home and the church were designed in Gothic Revival style.  The architectural firm of Hubert & Pirsson was responsible for the church and, assumedly, the four-story Home as well.  The Home sat on the corner of Madison Avenue and 89th Street with the church and rector’s residence directly to its east.


While the Home could house 70 residents (including "all the appliances necessary to the comfort of the inmates"); the church structure was more ambitious.  The completed structure would, according to The Times, accommodate 5,500 persons.


The newspaper noted that “It was deemed unadvisable to erect aisles and transept, but it will contain a clerestory and a chancel, and its general interior will be fitted up with regard to the comfort and convenience of the congregations.”  Construction was projected to take a year from the cornerstone laying at a cost of about $50 to $75,000.


Although the church was consecrated on November 6, 1873, finishing touches would go on for years.  Additional details like the memorial windows and tablets added to the cost and on March 30, 1880, when the Church of the Beloved Disciple was incorporated, the final cost to Caroline Talman had risen to $150,000—about $3 million today.  The Times called it “a magnificent ecclesiastical edifice…splendidly furnished.”


Despite its size (100 feet deep and 70 feet wide) the Church of the Beloved Disciple managed to remain quaint; with all the charm of an English country chapel.  An impressive square stone tower, 125 feet tall, vied with the church building for visual appeal.


The final touch came on October 31, 1881.  Caroline Talman, who oversaw every detail of the decoration and design of the church, had commissioned the architectural sculpture firm of Moffitt & Doyle to execute the reredos—“a most attractive ornament to the chancel of this free church,” said a newspaper.


The New York Times noted “The edifice, with all of its appointments, inside as well as outside, together with the memorial windows and tablets, and even the reredos, just completed, are from the original plans and suggestions of Miss Talman.  That lady’s generosity and taste are everywhere manifested in the condition and work of this church.”


Perhaps the most attention-getting sermon delivered in the church was from a guest speaker.  The Rev. George F. Degen of Arkansas preached here on July 27, 1890 about, of all things, baseball.   The sports-loving minister grabbed the congregation’s attention by endorsing healthful activities.  “The Puritan who everlastingly sang psalms and who denounced healthful amusements as a trifling with one’s eternal destiny contradicts every natural instinct of the heart of man, and either drives men away from all religious teaching or makes unnatural Christians of them.  God tells us there is a time to laugh and sing as well as a time to pray.”


He then compared the game of life to a game of baseball.  “In each case there is a race to run, and it is to be made by stages and beset with difficulties at every point.  The goal for which players strive is called the home plate.  The goal to which we battle our way through life his heaven.  Sometimes it happens that when a man takes his stand at the bat he strikes out.  But he does not give up.  By and by he makes a manly effort, and perhaps he knocks a home run.”


Reverend Degen ended what a newspaper deemed “a unique sermon” saying “Happy may he be who, after many trials and struggles…hears the blessed word of the Divine umpire – ‘Safe.’”


By the time of Degen’s baseball-inspired sermon the Upper West Side around the church was developing with high-end residences.  No longer simply a church of convenience for the aged women of the Home, the Church of the Beloved Disciple served many moneyed families.  Episcopal rectors often enjoyed an enviable social status and such was the case of the Rev. Dr. Henry Merlin Barbour.


In January 1898 Rev. Barbour’s daughter, Elizabeth, married Hutchinson Southgate, the son of Horace Southgate, the Episcopal Bishop of Constantinople.  It was what The New York Times deemed “an elaborate church wedding,” followed by a wedding breakfast in the rectory next door.  The newspaper noted that the newlyweds “will make their home at the rectory after their wedding trip until April 1, and will receive their friends on Tuesdays.”


Hutchinson Southgate had previously adopted a young woman, Helen Forbes.  She later told officials that she used the name Southgate “while with him,” but “Subsequently, owing to a private difference, I left the family and, the adoption having been annulled, resumed my own name, Forbes.”


While visiting the Southgates, Henry Barbour and Helen Forbes became acquainted.  “We became good friends and boated and fished and rode and walked together,” she said.  Their friendship seems to have gone further than was appropriate for the son of a well-respected rector; for on September 14, 1900 he was found dead in a New York hotel with a gunshot to his head.  He and Helen had registered as “G. N. Bartlett and wife, New York.”


An investigation would discover that the couple had planned a mutual suicide; but after Henry ineffectively shot Helen in the chest, then shot himself; she fled the scene.  The Rev. Dr. Barbour said of the tragedy “He was a severe sufferer from neuralgia, and this, combined with a mad infatuation for a woman, led him to his death.  It would have been a great relief to my soul if this had been a murder instead of a suicide.”


On November 3, 1924 it was announced that the Church of the Heavenly Rest and the Church of the Beloved Disciple would merge.  “Each will sell its present property eventually and the churches will jointly build a great new Episcopal edifice costing about $3,000,000 at Fifth Avenue and Ninetieth Street,” reported The Times.


During the last service of the Church of the Beloved Disciple on February 10, 1929 the Rev. Henry Darlington, rector of the combined parishes, recalled the day when the building had been consecrated.  “There were but few houses within a mile of it, and all streets leading to its site were imperfectly paved.”


The church building would not be vacant long.  On October 6, 1929 dedication services were held as the edifice became the new home of the Reformed Church of Harlem—the sixth building of the congregation since it was organized in 1660.  During the six months since the congregation of the Church of the Beloved Disciple left, renovations had been done.  Among those was the installation of Dutch tiled flooring in the sanctuary.
Renamed the East Eighty-ninth Street Reformed Church, the congregation worshiped in the quaint Gothic building until June 25, 1950 when it disbanded.   Not long before the Reformed congregation dissolved, Cardinal Spellman established the congregation of St. Thomas More Church.   The new Roman Catholic church established itself within two weeks in the old edifice.  On July 9 Auxiliary Bishop Joseph P. Donahue, vicar general of the Roman Catholic Archdiocese of New York blessed the church before about 600 persons.


More than a century after its completion, a restoration project was begun in 1989 to address repointing of the masonry and restoration of other elements.  The decade-long process eventually included major work on the tower, restoration of the stained glass, and refurbishing of the choir and chancel areas. 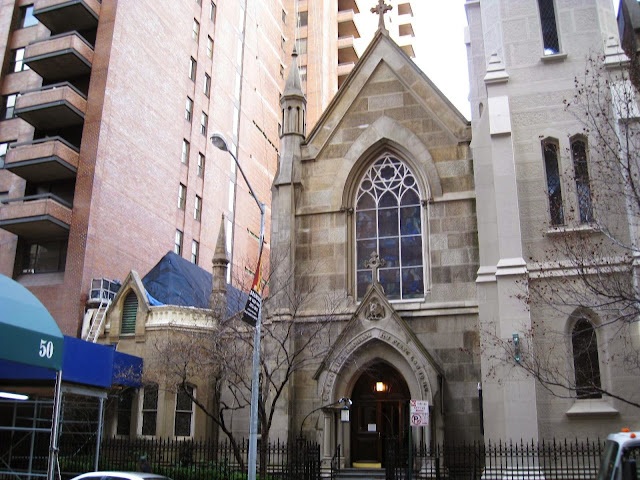 Among the well-dressed worshipers filing in and out of the stone church in the decades just before had been Jacqueline Kennedy Onassis and her children.  In July 1999 Senator Edward M. Kennedy stood before the mass of about 350 mourners here to eulogize John F. Kennedy, Jr.  The “simple stone church,” as N. R. Kleinfield described it in his report on the funeral, became the center of attention for the nation for a day.


Since that day, the charming Gothic church has returned to its quiet existence on a side street of the Upper East Side—a little known treasure awaiting discovery by urban adventurers.

photographs taken by the author
Posted by Tom Miller at 2:42 AM