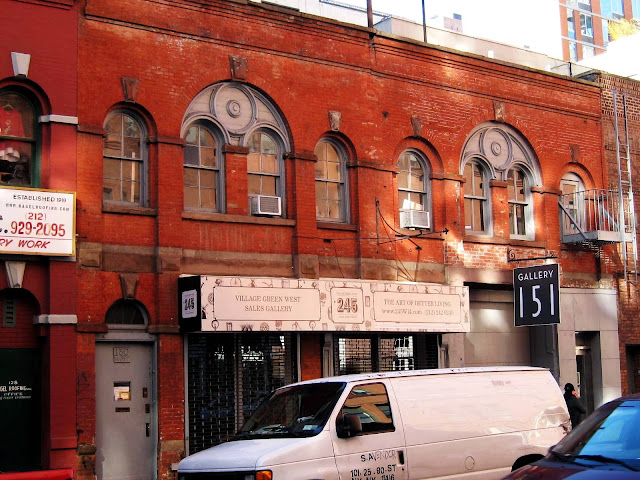 By 1817 the era of summer estates and farms above 14th Street was rapidly coming to a close.  Already, the Commissioners Plan of 1811 which laid out on paper the grid of streets and avenues had prompted many property owners to start selling off their land as building sites; among them the family of Peter Warren.


It was about this time that wealthy wool merchant John Tonnele began purchasing large tracts of real estate above 14th Street, including parts of the Warren farm.  Upon his death 32 of the lots, along West 17th and 18th Streets, were inherited by his daughter Susan G. Hall.  By the time she decided to start selling off the property in March of 1863, the once-rural neighborhood was sparsely-developed with shanties, a brewery, and the immense 400-foot wide factory of Weber Pianos at No. 18 East 17th Street, at Seventh Avenue.


The semi-industrial neighborhood was not suited for fine brick or brownstone dwellings; however it was conveniently close to the homes of Fifth Avenue for private stables.  Elisha Brooks, one of the successful Brooks Brothers clothiers, purchased three of Susan Hall’s lots in two sales—in May and then June of 1864.  He had three identical two-story private carriage houses constructed—handsome brick-faced structures with rhythmic arches in the newly-popular Rundbogenstil style—the robust German version of the American Romanesque Revival.


Quite amazingly, Brooks started a surprising trend on West 18th Street.  During the 19th century the personal stables of wealthy citizens were almost exclusively designed for the individual owner.  Well-to-do Victorians often vied to outdo their neighbors in the style and attractiveness of these utilitarian buildings.  Stable blocks, which rapidly emerged as corresponding residential blocks developed, were most often a mish-mash of handsome, yet highly individual, designs.


That would not be the case on West 18th Street.


Susan and her husband Valentine Hall retained one of the plots, No. 128, for their own use.  They erected a carriage house on the site that exactly matched the three built by Brooks.  Within two years there would be a total of 13 private stables along the block, from No. 130 to No. 146—each one a carbon copy of the originals.


Wilmot Johnson began construction of his carriage house next door to the Hall’s, at No. 130, in 1864.  An Albany coal merchant, he had a New York City office downtown at No. 111 Broadway, near Wall Street.  It is unclear whether he intended to use his new stable, finished in 1865; or if it was a speculative investment.  But he soon sold it to banker Walter S. Gurnee.


Gurnee lived nearby at No. 33 West 20th Street.  Having made a fortune in Chicago (and serving two terms as that town’s mayor) he had moved to New York two years earlier to open an investment banking firm.  The well-respected politician, railroad tycoon and banker was described by Ulysses S. Grant:  “He is a gentleman of intelligence, cultivation and wealth, and particularly well posted in matters abroad and in our financial matters.”


Before long Gurnee and his wife, Mary Matilda Coe Gurnee, would move to Fifth Avenue.  They retained the 18th Street carriage house only three years, selling it to Henry T. Helmbold in 1868.


Helmbold was a manufacturing druggist with a brilliant mind for marketing.  The Henry T. Helmbold Mfg. Co. made, among other tonics and elixirs, “Henry T. Helmbold’s Highly Concentrated Compound of Fluid Extract.”  Helmbold assured customers that the tonic was prepared under his “personal supervision, and its usefulness and efficacy are guaranteed by his personal reputation and experience.”


Guarantees aside, Henry T. Helmbold declared bankruptcy on September 13, 1872.  But before his financial embarrassment made the newspapers, the carriage house at No. 130 West 18th Street would once again change hands.  In 1871 he sold the building to Major Theodore K. Gibbs.


The Civil War veteran lived nearby at No. 62 West 21st Street.  According to The Sun years later, it was Gibbs “who directed the firing of the last cannon shot of the war.”  Twice he had been promoted for gallantry in battle.  For the rest of his life he would be addressed by his military rank.


The Major’s coachman, Irish immigrant William Spence, lived upstairs in the carriage house with his wife Susanna, their son and four daughters.  It would seem to have been a rather crowded environment.


Unlike his predecessors, Gibbs would own the stable for years.  While his carriages and horses were housed on 18th Street, he busied himself in various philanthropies.  Among his favorites was the Metropolitan Throat Hospital of which he was a trustee.  The New York Times described the facility, saying “It treats poor patients gratuitously for all affections of the throat, nose, and ear.”


On January 23, 1881 the newspaper noted that the Hospital’s trustees held “their annual meeting Friday evening in the parlors of Major Theodore K. Gibbs, in Twenty-first-street.”


Summers would find Major and Mrs. Gibbs entertaining in their Newport cottage on Gibbs Avenue.


Meanwhile, the matching stable next door at No. 132 had been built simultaneously with the Gibbs structure.  It was constructed for broker John R. Garland who lived at No. 28 West 21st Street.  Although Garland sold the stable within three years; its next owner would hold on to it for decades.

Nathaniel L’Hommedieu McCready was President of the Old Dominion Steamship Line and, like the other owners along the row, lived close by.  He and Caroline Amanda Waldron McCready owned a handsome brownstone rowhouse just off Fifth Avenue at No. 10 West 22nd Street where they raised their three children.


McCready’s fleet of steamships ran between New York City and four ports in Virginia.  In addition, he was President of the Missouri, Kansas and Texas Railroad.  Nathaniel McCready’s substantial wealth was reflected in his club memberships: New York Yacht Club, the very exclusive Union Club, and the St. Nicholas Society.


In 1872 Brooklyn and New York were devastated when an unknown “epidemic” swept through the cities’ stables.  Horses died at a rate never before recorded and city traffic came to a near stand-still.  Horse-drawn street cars disappeared from the avenues, retail merchants kept their horses in their stables with “their heads and throats bound up,” according to The New York Times on October 31, and deliveries of ice and other services ground to a halt.  The Times noted that “In view of the disabled condition of the horses of the street-cleaning contractors, the Board of City Works requests persons not to place their ash-barrels on the sidewalks, as their contents cannot be removed.”  The newspaper said the fear of fire was “increased ten-fold by the known fact that nearly all of the horses belonging to the Fire Department are incapable of performing duty.”


Among the long list of horses reported by The Times that had died the day before was one belonging to McCready.


Nathaniel L. McCready died on October 3, 1887 at the age of 66.  His will divided his estate into three equal parts for his children and provided “an annuity for his wife.”  The bequests were apparently substantial.  In 1895 a new 50-foot wide mansion was completed for Nathaniel L. McCready Jr. at No. 4 East 74th Street between Fifth and Madison Avenues.


That year Caroline McCready had the old carriage house renovated with ramps and upper stalls so horses could be housed on both floors.  Within four years she was ready to sell the building and, interestingly enough, entered negotiations with Major Theodore K. Gibbs.


The Major retained ownership of the two carriage houses until July 13, 1905, when The Sun reported on their sale to a single purchaser.  Just a year later, on March 29, 1906, the pair was resold.


By now manufacturing lofts were appearing along the block and mammoth, block-wide  emporiums had already taken over 6th Avenue.  Amazingly the row of two-story stables had survived.  The new owners of Nos. 130 and 132, the Metropolis Security Company, broke through the interior walls, creating a single structure.  The flanking entrance doors of the two buildings were knocked out, creating an additional vehicle entrance and the stone cornice that had separated the two floors was removed. 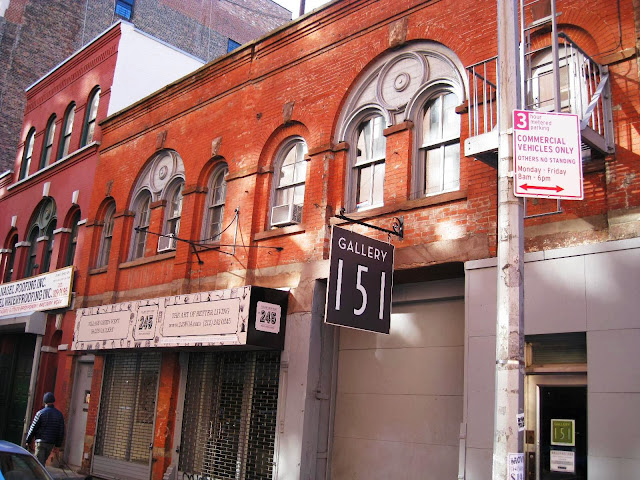 The combined building was leased to T. J. Gerome who operated his automobile repair garage here.  Two fires, in 1914 and 1946, resulted in necessary alterations at street level; however the upper floor remained mostly intact. 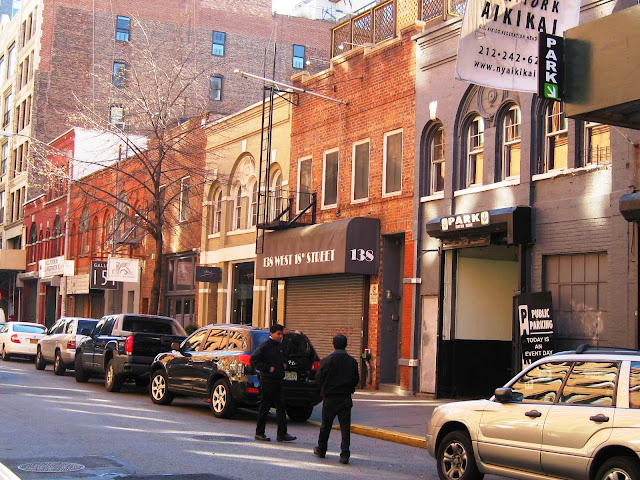 Throughout the 20th century the two little buildings and their matching cousins along the row were used for various purposes—garages, shops and light manufacturing.  And they were highly abused.  By the turn of the 21st century, however, they mostly survived relatively intact—an astonishingly rare row of matching 19th century speculative stable buildings.

photographs taken by the author
Posted by Tom Miller at 3:47 AM