Once development got going on the Upper West Side, it steamrolled.  Beginning in the 1880s developers filled entire block fronts in a single sweep with harmonious homes designed by a single architect.

Unlike the East Side with its prim, correct homes, the West Side erupted with Queen Anne, neo-Tudor, Flemish Revival and other expressive styles complete with gargoyles, dog-legged stoops and stained glass windows.  The mansions of the Upper West Side were not your East Side palaces.

Developer-builder John C. Umberfield joined in the building boom and purchased the block front of 105th Street between the newly-completed Riverside Drive and West End Avenue.  He commissioned the architectural firm of Janes & Leo to design a striking row of high-end residences that would stretch from No. 302 to 320.   The firm had just completed The Alimar around the corner at No. 925 West End Avenue, an exuberant high class apartment building in the Beaux Arts style.

For Umberfield’s string of homes, the firm would turn to the highly popular style again, creating a row of French-influenced mansions much more akin to their across-the-park cousins than their brick-and-stone West Side neighbors.  Construction began in 1899 and the row was completed a year later.  The homes were all highly similar, but discreetly individual.  The mansions were grouped in twos with each pair being nearly identical.  By arranging the row this way, the architects accomplished an harmonious flow and a sense of balance.

The closest to River Side Drive was No. 320.  Five stories tall, it was entered at street level.  A two story slightly-angled bay was flanked by shallow pilasters and decorated with ironwork and carved garlands.  A slate-tiled mansard was punctured by two hooded dormers. 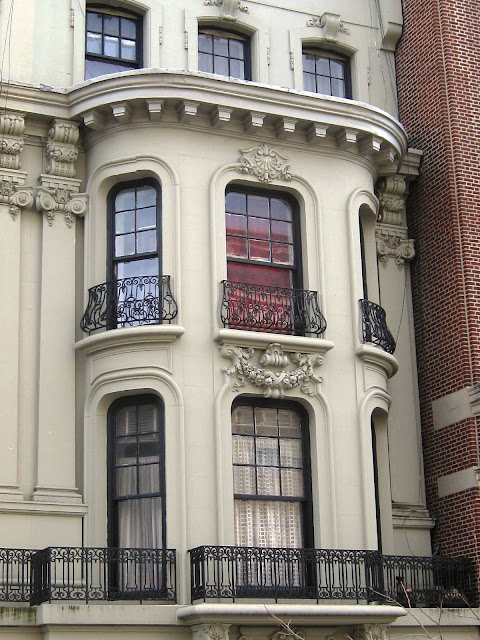 Banker Robert E. Tod purchased the house.  He and his brother John Kennedy Tod ran the firm of J. S. Kennedy & Company founded by their uncle.   When not banking, Tod was yachting.  He was Commodore of the Atlantic Yacht Club and was instrumental in organizing an international yacht race involving the German Emperor in 1903.  He was put in the awkward position of deciding between the cup offered as grand prize by Sir Thomas Lipton and the imperial cup offered by the Emperor.  He chose the latter.

That same year Tod was somewhat of a hero when he was motoring home along Broadway at 65th Street on September 4.  Ellen Walsh, a young mother carrying her baby, stepped off an electric trolley car and started to cross the street.  While Tod watched, she was run down by a hansom cab.  The shaft of the cab knocked her and her baby to the ground.  “The horse’s hoofs also struck her, and one of the wheels of the cab passed over her body,” reported the New York Times.

The cabbie, Frank Woods, whipped his horse and drove quickly away.  Robert Tod went into action. He sped after the cab, calling for him to stop.  “Woods paid no attention to the banker,” said The Times.  “At Sixtieth Street Mr. Tod overtook Woods and upbraided him for running away.”  When the cabbie exhibited his resentment at the interference, Tod told him that if he did not come to the station house with him, “he would arrest him himself.”

The cabbie realized he was caught and went to the police station with Tod, where he was charged with assault and jailed.  Both Mrs. Walsh and the baby were treated for their wounds and a policeman drove them home.

In 1906 Tod moved to No. 323 West 74th Street and No. 320 became home to attorney Walter M. Goldsmith and his wife, Hennie.  Like Tod, Goldsmith had a motor car (his was a Hupp), a reflection of his financial status.   The Goldsmiths would stay on in the house until July 1919 when it was sold to “a builder who plans to alter the premises.”

The builder was Richard A. Henrique and alter it he did.  He converted the mansion to bachelor apartments.  The building filled with a variety of tenants--none, perhaps, so rich but by no means any less colorful than their predecessors.

Charles D. Lowe was one of the first young men to live here.  On January 10, 1922 he parked his automobile at 109th Street and Fort Washington Avenue, only to find it gone when he returned.   A little over a month later, on February 15, police noticed it parked in front of a hotel in Smithtown, Long Island.  When the driver, 22-year old Samuel Schultz, started to drive it away, they arrested him.  Schultz had just completed a term of two and a half years in Sing Sing for an earlier automobile theft.

In 1927 Herman Bloom lived here.  He was a waiter in the swanky nightclub at No. 154 West 54th Street owned by singer Helen Morgan.  On the night before New Year’s Eve Chez Helen Morgan was the scene of “one of the most spectacular night club raids in the history of metropolitan prohibition enforcement,” according to The Times.

At around 1:30 in the morning, 25 agents crashed into the club.  They not only arrested Helen Morgan and eight employees, they “completely wrecked the club,” said The Times, causing $75,000 in damages.  Among those behind bars that New Year’s Eve was Herman Bloom.

Another resident to find himself behind bars was Alvin G. Davis, a 45-year old real estate salesman.  Davis supplemented his real estate commissions with forgery and swindling.  In September 1928 he advertised that he wished by buy a three-carat diamond ring.  Jeweler Irving Robinowitz of No. 562 Fifth Avenue responded.

When Davis (who formerly went by the name Albert Davis) wrote out a check for the $1,650 price tag, Robinowitz refused to accept it.  So Davis suggested they go to his bank and have the check certified.   While the jeweler looked on, Davis presented a check to the teller who certified it.  The check, however, was for $25.  Davis then handed Robinowitz a $1650 check with an artificial certification.

Although he protested his innocence, Davis had already served time in Sing Sing Prison for forgery in 1914, returned in 1921 for four years on three charges of forgery; and received a suspended sentence in 1926 for attempted grand larceny.  Alvin Davis had a hard time learning a lesson.

The “bachelors only” rule was no longer observed by 1933 when Doris W. Hopkins lived here with her Pekinese.  She was no doubt highly pleased her pampered pet took home “best dog of the day” at Bloomingdale’s department store’s second annual dog show in January of that year.  The store was compassionate to the mongrels as well; for besides the pure-bred competition The New York Times noted “Friday, January 13, has been set aside for dogs whose ancestry is at best vague.”

In 1937 the house was sold, assessed at $37,000.  It was converted to apartments, two to a floor.  Today the former mansion looks much as it did in 1900; although the entrance door has a rather unfortunate replacement.  It anchors the wonderful string of well-maintained residences that brought a little bit of the East Side across the park in 1900. 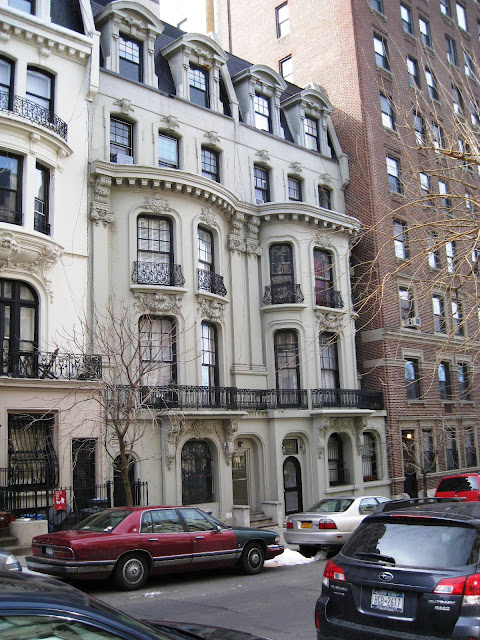