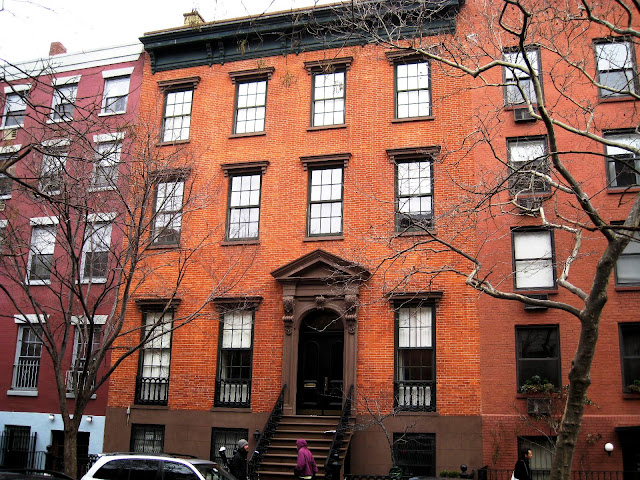 The 1811 Commissioners’ Plan laid out on paper the regimented grid of streets and avenues that would define Manhattan above 14th Street.  Sprawling country estates of the city’s gentry were now, at least on paper, divided into blocks that would sprout rowhouses and commercial buildings.  Among these was Chelsea, the family estate of Clement Clarke Moore.

Moore accepted the inevitable and seven years later donated a full city block, known as Chelsea Square, for the establishment of the General Theological  Seminary of the Episcopal Church.  In 1831 a chapel of Trinity Church, St. Peter’s, was dedicated half a block away on West 20th Street.  Before long Moore’s once-rural estate would be a hive of development.

Initially he wrote restrictive covenants into the residential deeds to ensure a higher class of homes.  Joseph Tucker was one of the first two homeowners on West 22nd Street between Eighth and Ninth Avenues.  In 1835 he purchased six lots from Moore with the agreement that he would complete a residence within the year.  The deed required that the house stretch 37 and a half feet wide--over 12 feet wider than the average building lot.

Tucker was a mason and builder who, quite possibly, was responsible for the construction of his own mansion at No. 337.  Next door, at No. 333, what was probably an identical house was constructed for Nicholas Ludlam and Tucker was most likely responsible for that home as well.  The wide, elegant homes were designed in the Greek Revival style that had recently nudged Federal-style residential architecture out of fashion.  They were considered mansions at the time and, as Moore intended, set the bar for construction along the block. 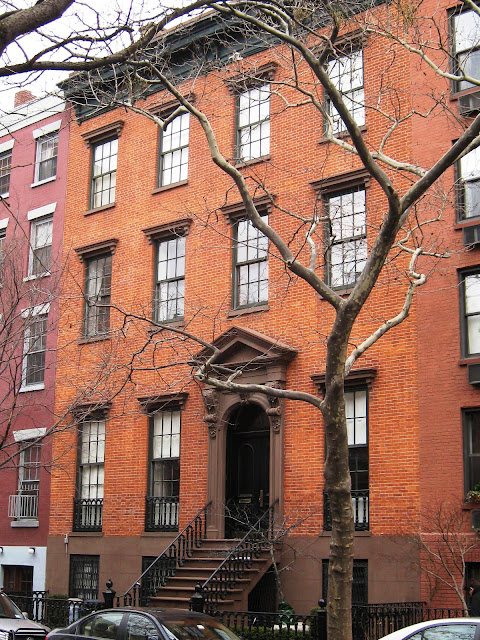 As John Tucker and his wife Isabella lived comfortably at No. 337, dry goods merchant and broker Don Alonzo Cushman was buying up property from Clement Clark Moore.  Between 1839 and 1840 he constructed the string of elegant Greek Revival homes a block to the west on 20th Street between Ninth and Tenth Avenues known as Cushman Row.

Around the time of the Civil War the Tucker house was modernized with an Italianate doorway, Victorian ironwork and a bracketed cornice.  When the Tuckers left West 22nd Street is unclear; but by the 1890s No. 337 was home to Don Alonzo Cushman’s son, Ephraim Holbrook Cushman.

The family traced its American roots to Robert Cushman who landed in Plymouth on the Fortune in 1621.  Ephraim Cushman was born in 1832 and his son, Holbrook, graduated with honors from Columbia College in 1878.  Holbrook then studied physics, mathematics and chemistry abroad at the University at Wurzburg, Bavaria, then at Helmholtz in Berlin.

Upon his return to New York he was appointed assistant in physics at Columbia, where he quickly rose to the rank of instructor.  Although he was an electrical engineer and was connected with several large corporations in the U.S. and England, his heart was in the classroom laboratory.   He spent his summers in Europe not on vacation; but to study the methods used in the leading universities which he would integrate into his teaching.

At the end of the school term in 1895 the 38-year old Cushman requested a leave of absence citing “ill health.”  Within two weeks he was confined to his bedroom in the West 22nd Street house; his doctors diagnosing “heart trouble.”  On the afternoon of October 25, 1895 he died in his bed at No. 337.

Friends and relatives of the family visited the body of Holbrook Cushman in the parlor the following day, before it was removed to St. Peter’s Church.  There the funeral was held at 10:00 on the morning of October 27.

The family stayed on in No. 337 and, like his father, Joseph Wood Cushman graduated with honors from Columbia College.  In 1893 he married Frances J. Rathborrne.  The couple had a son, also named Holbrook, who was born in 1895, the year of his grandfather's death.

By 1904 the Cushmans had moved to No. 240 West 23rd Street and were leasing the family home.  The once-grand homes between Eighth and Ninth Avenues were slowly being converted to rooming houses.  Simultaneously, a movement that some viewed with suspicion was taking hold a few blocks south on 14th Street.

That year Evangeline Booth arrived in New York.  The daughter of William Booth who founded the Salvation Army, she had come to take charge of the U.S. operation.  The Army’s headquarters had recently been established on 14th Street and in 1905 the Salvation Army Training College was opened at Nos. 126-130 West 14th Street.  The building burned to the ground in 1918 and a year later the Training College established itself in the Cushman house.

Directly across the street lived the President of the Borough of Manhattan, Frank L. Dowling.  The superintendent of the school became close friends with the politician.  As The New York Times explained it, “They became acquainted through Mr. Dowling’s 3-year-old daughter, who frequently visited the Salvation Army headquarters, where she was a favorite with the Superintendent and the workers.”

In September that year Frank Dowling died.  His well-regarded status was reflected in the names of his pallbearers:  Mayor John F. Hyland; City Controller, Charles Craig;  President of the Board of Aldermen, Robert L. Moran; all four other Borough Presidents; and leader of Tammany Hall, Charles F. Murphy.  On September 29, 1919 125 students from the Training College crossed the street and assembled “in military formation,” according to The Times, “and sang hymns and offered a prayer for the comfort of the Dowling family.  The ceremony attracted a large crowd, which took part in the singing.”

The Salvation Army Training College would not stay long in the Cushman House.  On December 31 that year it purchased a building in the Bronx and soon moved on.

The once-proud home, still owned by the Cushman family, was broken into apartments in 1921; however the Department of Buildings restricted its use to “not more than two families cooking independently on premises.”  Among the tenants would be Herschel Jones and his wife, Inis.  Inis was a well-read journalist who wrote under the name of Inis Weed Jones.   She was adept at popularizing less exciting topics such as medicine, sociology and science and wrote extensively for Harper’s, Schibner’s and the Reader’s Digest.  Her husband stayed on in the house after she died in 1938 while researching an article on the cooperative farm movement.

The Chelsea neighborhood underwent some unfortunate times in the second half of the 20th century and many of the old homes were substantially altered.  In 1962 No. 337 underwent a sweeping renovation which reportedly obliterated any surviving interior detailing.

Although no trace of John Tucker’s 1836 Greek Revival façade remains, the Victorian remodeling is mostly intact.   And the mansion has fared far better than its once-identical next door neighbor at No. 333 which is ruined beyond hope.