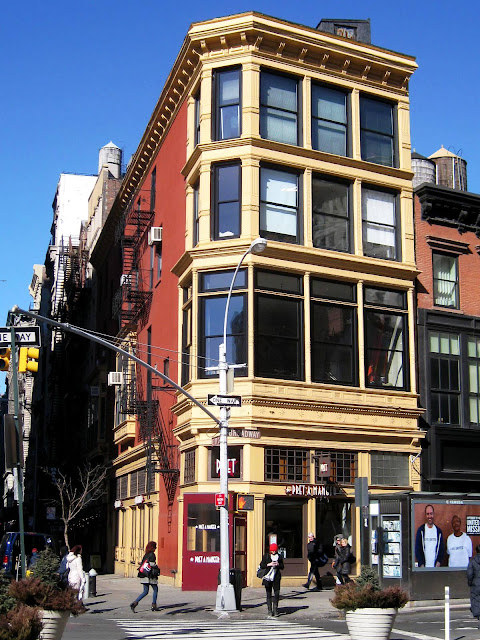 The Goelet Family traced its roots in New York to 1718.  That year John G. Goelet, a Huguenot who had come to America after the revocation of the Edict of Nantes, arrived. The family gained its financial foothold as merchants; but the Goelet’s greatest wealth came from the acquisition of land.

The family amassed its fortune by acquiring, but never selling land.  As the city grew northward, it began encroaching on the “Goelet Farm,” a vast swatch of real estate that covered much of the Broadway and Fifth Avenue areas north of 14th Street.

Peter P. Goelet, the grandson of John, had two sons, Peter and Robert.  Upon his death, the brothers inherited and managed the vast holdings.  In 1836 Peter paid the staggering price of $22,500 for the mansion of recently-deceased Cornelius T. Williams at the corner of Broadway and 19th Street.  Eccentric and reclusive, he never married, but was close to his brother, Robert.

Soon Charles Ruggles, who had developed the exclusive Gramercy Park a decade earlier, was busy working on Union Park, later to be called Union Square.  By 1845 the park had been laid out and fine mansions were being erected along its perimeter.  Peter Goelet started construction on a mansion at the northwest corner of 17th Street and Broadway in 1845.  Completed a year later it became home to his brother in 1854.

The Goelet brothers now lived two blocks apart.  Henry Hall in his “America’s Successful Men of Affairs in 1896," said Robert “resembled his eccentric brother Peter in many respects and was warmly attached to him, the two men making visits to West Point together every year, and being constantly in each other’s society.”

Robert, unlike his brother, was married.  In October 1839 he had married Sarah Ogden, and they had two sons, Robert and Ogden.   But like Peter, Robert and his wife lived a quiet existence with little apparent entertaining or display in the house.

Three years after the family moved in, on Wednesday morning September 16, 1857, the funeral of Robert’s sister-in-law, Charlotte E. Lawrence was held in the parlor.  The New York Times announced that relatives and friends of the family were “respectfully invited to attend…without further invitation.”

By now the once-fashionable Union Square had been engulfed by commercial interests.  The mansions that had not been razed and replaced with businesses were converted.  And so it would be for the Robert Goelet mansion.  A contemporary etching shows an added parapet and other modifications for commercial use.

Then in 1884 architect Joseph M. Dunn stripped off the masonry façade and replaced it with an up-to-date cast iron front.  The structure was extended to the rear as retail space was introduced at street level and offices installed above.  Touches of the Aesthetic Movement—like stylized sunflowers—decorated the cast iron. 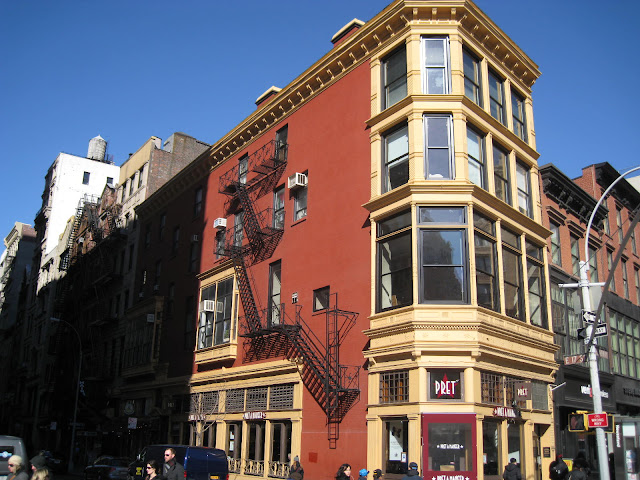 Jeweler Joseph F. Chatellier was among the first tenants.  One of his competitors, Tiffany & Co., also had its store on Union Square.  Joining the jeweler in the building was the salesroom of Brokaw Mfg. Co.  The firm manufactured men’s shirts in Newburg, New York and in September, 1890, advertised “Over one hundred thousand dollars’ worth of flannel shirts will be placed on sale.”

When Chatellier left, William Marcus took its place.  Marcus & Co., like its predecessor and Tiffany’s, was a high-end dealer in diamonds, pearls and other costly items.  And like those firms, it was a target for thieves.

One of the thieves was 18-year old Lizzie Patterson.  On August 16, 1894 she found herself in court on several counts, one of which was bilking $125 worth of diamonds from Marcus & Co.  It was not her first appearance in that same courtroom.

Earlier, before her marriage to George Patterson, she watched on as he was tried for forgery.  The New York Times reported at the time “he pleaded piteously to be released, saying that it was his first offense, and that he was about to be married.”  Then Lizzie “added her tears to his prayers, and Judge Cowing suspended sentence.  The couple were married in the court room.”

Now she was back, charged with the Marcus theft by forgery and for passing a counterfeit certified check for $100 at Flomerfelt & Co. nearby at No. 644 Broadway.  She tried to get goods from Tiffany & Co. “but the delivery of the goods was stopped on suspicion that all was not right.”

Lizzie’s lawyer pleaded for clemency on account of her tender age.  The jury found her guilty and she was remanded to the Tombs.

Just a week earlier William E. Marcus had been in the Police Court because of another theft.  It was customary for salesmen to obtain merchandise from retailers on “memorandum” when they had a likely customer, and then pay for the items after receiving payment.  Salesman Adolph Roller obtained a $450 pair of diamond earrings from Marcus that way and then, instead of selling them, pawned them for $250.

Marcus was vehement and had the saleman arrested.  The magistrate held Roller on $1,500 bail for trial.  The Times reported that “When he heard the Judge’s decision he fainted.”

Finally in February 1898 Marcus was on the stand against Bellwood.  The crook had traveled to France where, under the name of Louis Alfred Balensi, was involved in blackmailing.

Around 1900 Joseph de Young opened his photography studio in the building.  In 1903 the Drake Business School began operations in the upper floors, advertising “well lighted and cheerful rooms” where students could be trained in shorthand, telegraphy, higher accounting and other business courses.

Joseph De Young’s Photograph Gallery boasted that it was the “largest photographic establishment in New York City” and it would stay here for decades.  In 1907 it was instrumental in the apprehension of a bizarre thief.  The studio displayed samples of its work in a sidewalk case.  A watchman caught Edward M. Burnham, an Englishman, jimmying open the case and removing photographs.  He had taken a photograph of a polo team and another of a basketball team.  It would seem to be a petty crime; but the eyebrows of the police were raised when he gave his address—the Edward Berwind mansion on Fifth Avenue and 64th Street.

Burnham was the millionaire’s butler and, as it turned out, had also been the butler for Howard Gould, Charles T. Barney and Samuel Untermyer.  A search of his room turned up an Aladdin’s cache of personal items stolen from his millionaire employers.

The Sun reported “It is a very rare burglar, in the experience of Headquarters, that will treasure in his rooms such trinkets as a powder puff with jewels about the handle, silken hose with S.U. embroidered in feather stitch just where the garter clasps, several hundred silken neckties and an assortment of shoes from pumps to riding boots, to say nothing of pearls worth $600 and other gauds that should go directly to a conscientious ‘fence.’  So Headquarters believe that in the apprehension of Burnham they have a devote to art purely for art’s sake.”

Years later the photographer himself would be posthumously responsible for shocking the public.  Joseph B. De Young had a partner in the business, a woman named Matilda Wallace.  On December 18, 1919 his will was filed in the Surrogates Court.  The New-York Tribune spilled the details the following day.

The newspaper reported that De Young bequeathed “$5 each to his widow and son.  To Matilda Wallace, his partner in the photographic establishment, he left his one-half interest in the business.”  The photographer explained that Wallace had loaned him $15,000 after he had lost money in the stock market.  “And this is the only means I have to make some payment on that debt.”

At the time that Joseph De Young’s widow and son were trying to figure out how to subsist on their $5 inheritances, the U.S. Government was dealing with anarchists.  Among these were Mollie Steimer, Jacob Abrams, Samuel Lipman and Hyman Lachowsky who were all serving prison sentences for distributing literature opposing American military intervention in Russia.

The group’s attorney was Harry Weinberger who worked with The Political Prisoners’ Defense and Relief Committee with offices in No. 857 Broadway.   As Weinberger negotiated their release on the conditions of deportation, the Committee was raising the funds necessary to pay their traveling expenses.

Mollie Steimer, however, was a bit more stubborn that the rest.  Although “admitting she is an anarchist, [she] has refused to consent to deportation on the ground that individuals have the right to live anywhere,” said The New York Tribune on August 4, 1920.  Assumedly that included prison.

By mid-century the shops and businesses along Union Square were not as exclusive as they had been in the 1890s.  In 1942, during World War II, Northeastern Mdse. Co. ran its mail order business from No. 857.  The firm capitalized on the rampant and  deep-rooted bitterness against Japan and Germany and that year advertised “Hitler and the Jap”—an assortment of puzzle cartoons that cost $4.00 for 1,000 at wholesale.  The firm promised they were “Far funnier than 4 pigs.  Now showing the Jap hung on a noose; also Hitler and the rats.”

Although the building suffered neglect in the late 20th century, a 2005 renovation brought it back to life.  Now part of the vibrant, rediscovered Union Square neighborhood its late Victorian makeover shines.  No one would suspect that under the cast iron façade hides the mansion of one of New York’s wealthiest citizens of the 19th century.