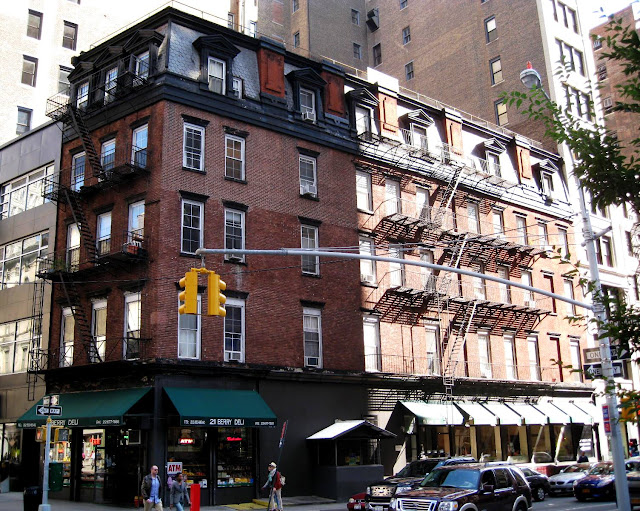 Around 1854, as Broadway just south of the fashionable Union Square filled with refined residences, Jacob Cram build a row of Italianate brick rowhouses on the thoroughfare's east side between 21st and 22nd street.   If Cram’s attractive building at the corner, No. 922, was ever intended as a single-family home it did not remain one for long.


In 1855 George S. Park’s “Select School for Boys” (formerly D. P. Baron’s) occupied the upper floors.  The well-heeled students entered through a door on 21st Street.   As the school prepared to re-open on September 8, 1856, it advertised in the New York Daily Tribune.  “There are three Departments—Senior, Middle, and Primary, with gymnastic Apparatus for physical training.  Circulars may be had at Lockwood’s Bookstore or at the School-rooms.”


The students here were schooled in “Classical, French, English and Primary School,” according to its advertisement the following year.  “Pupils are prepared for college or the counting-room.  Those between the ages of six and ten are under the care of a female teacher.  The Gymnasium is open to all departments.”


In the meantime the street level was home to the showroom of Colt & Whittelsey.  The firm sold chandeliers and gas fixtures to its high-end clientele.   On October 4, 1856 the store advertised a new shipment.   “Fifty New-Pattern Chandeliers—Never before offered in any market, will be OPENED THIS WEEK, for the inspection of purchasers.”


Additionally, homeowners could purchase weather stripping here.  An advertisement a month later urged “Every Dwelling-House should have Mathewson’s Patent Weather Strip on its Doors and French Windows.”  These were described as “a perfect prevention to the ingress of wind, dust and rain, besides being highly ornamental.  Can be applied to any door or window in a few minutes, at a trifling expense.”


In addition to lighting fixtures the firm supplied brackets and related chandelier parts and provided installation and customization of the devices.    At a time when most chandeliers were fueled by whale oil, the Colt & Whittelsey offered up-to-the-minute gas fixtures as well.

George s. Park’s school for boys was gone by 1859 and the upper floors of No. 922 had been converted to the Bancroft House hotel.   Run by M. L. and A. W. Bordwell, it had previously been located just a block to the south at No. 906 Broadway.


Julia Fitzgerald was a chambermaid here in December 20 of that year when a friend was invited to a ball.  Apparently her friend had nothing appropriate to wear, so Julia “borrowed” jewelry—a gold bracelet and breastpin—from the room of a guest, Mr. Duscom.  She also borrowed $25.


Since she had not bothered to inform Mr. Duscom of the loan, he complained and the chambermaid was detained by Judge Quackenbush.  On January 12 she appeared in court before Judge Russell. The New York Times reported that “As she made it appear probably that she had only used it as a personal decoration for a party to which she was invited, judgment was suspended.”


Her employment at the Bancroft House was suspended as well.

Exactly one year later South Carolina seceded from the Union and the first storm clouds that would become the Civil War formed.   By 1864 the nation was embroiled in a bloody conflict.  On Saturday October 1 of that year a group of “War Democrats” chaired by Peter Cooper met at the Bancroft House.


The delegates agreed on “no surrender of flag or principles to rebels in arms against the country, and no armistice that would give the traitors any advantages over the soldiers of the Union,” reported The Times.


The New York Times noted that “After some patriotic speeches, during which much enthusiasm was evinced, the meeting adjourned.”


Not all of the guests at the Bancroft House were travelers.  Seth Adams had lived here two years when in January 1865 he was sued by Andrew j. Millspaugh for “alleged criminal intercourse with his wife.”


T. Redding was a long-term resident here as well.  In January 1866 he wrote to the Editor of The New York Times in support of the proposed mass transit—subways and elevated trains.


Regarding the “tunnel and aerial roads” he wrote “I know, Mr. Editor, there is no room for any argument as to the great benefit that would accrue from this enterprise.  An axiom needs no investigation.  It is a fixed fact that one or both roads must be built, and that soon.”   The passionate Mr. Redding plead, “In the name of suffering pedestrians, let it be done.”


Despite its proximity to the exclusive Fifth Avenue Hotel on 23rd Street and Broadway, the Bancroft House remained popular as a respectable and more affordable hotel.   Room rates were advertised at 50 cents, 75 cents and $1 per day with “weekly reductions.”


The tony American Jockey Club rented long-term rooms at the Bancroft in the Spring of 1868 for its “subscription rooms.”   The club met here on June 4 to discuss the new betting procedures based on the London Tattersalls.  In stilted Victorian prose the secretary noted “The obligations contracted there, although not subject to enforcement in the courts of law, have always been rigidly kept, even at the cost or utter ruin to the unfortunate backer of the beaten horses.  The only bond has been the word of honor of gentlemen, and the wreck of many a princely fortune and the forced expatriation of many a proud nobleman, have born testimony to the fidelity with which the bond has been paid.”


Not everything went perfectly at the Bancroft House.    Only a month earlier Mrs. Margaret Butler returned to her rooms here around 2:00 in the afternoon of May 27.  She noticed that the door, which she had locked, was forced open.  Hearing her at the door, two men rushed past and darted down the stairs.


The New York Times reported “Sensing the true state of the case, she followed them, crying ‘Stop thief!’”  A police officer apprehended one of the thieves, William Wall, whom the newspaper called “a man of respectable and sedate appearance.”  Wall had on him burglar tools including four skeleton keys, a pair of nippers and a jimmy.  The other man “mysteriously disappeared.”


In the early 1880s Amos R. Eno owned the property.  Eno was a major player in the real estate field and also held title to the strange triangular plot of land just across Broadway which would later become the site of the Flatiron Building.   In June 1884 he sold No. 922 to Charles W. Burgoyne, a “provision dealer,” for $138,750 who established his store on the ground floor.  By now it had gained a handsome mansard roof, adding an entire floor, and had been extended back along 21st Street from 65 feet to 97 feet.

A bizarre string of suicides in the hotel occurred over the next two decades.  In May 1891 Thomas Atchison, just 21 years old, shot himself in the temple with a revolver.  He was a bellboy at the Hotel Clarendon.  On August 24, 1895 61-year old Ferdinand William Herrman, who had lost his fortune and was despondent over the financial troubles to his family, took poison.   Six years later on December 12, Frank Neumann drank carbolic acid here.  The 30-year old lived in Newark, New Jersey.  And on July 30, news correspondent Joseph B. McShane filled his room with gas and died for no apparent reason.

A ghastly murder-suicide occurred on July 30, 1887.   John E. Emmerson had been employed as a porter by the Bancroft House for about five months, but he resigned to work at the Astor House.   The middle-aged man whom the New York Tribune described as “of surly disposition and unsocial in his relations with other employees,” kept his rooms on the third floor here, though.


19-year old Charles Greer, who was visiting the United States from Ireland, had run out of money and while waiting for funds to arrive from home, took a temporary job at the Bancroft House so he would not have to borrow from friends.  It was a fatal decision.


The Tribune reported that he “was butchered in a most brutal manner by John E. Emmerson…After killing Greer, Emmerson killed himself.  There was absolutely no provocation for the murder and suicide, and the only explanation of the tragedy was the supposed insanity of Emmerson.”


On October 26, 1888 Burgoyne received $200 for allowing the Committee of Democrats and Independents to attach one end of a banner to the Bancroft House.   The banner, which stretched across 21st Street, read “For President, Grover Cleveland.  For Vice-President, Allen G. Thurman.  For Governor, Warner Miller.  For Clean Government and Ballot Reform.”  Except for the names, nothing much has changed in a century and a half.


The Sun commented on the imposing banner.  “It is made of netting, with the portraits of the three candidates on canvas attached to the netting.  Its workmanship is excellent.  It is perhaps the prettiest banner in town.”

Despite the scattered earlier tragedies, the Bancroft House continued its long run of success.  In 1896 the hotel was entirely refurbished and renovated.  It now offered rooms to “gentlemen only.”


In 1904 the property was owned by a young girl, Ruth Stephenson, who had inherited it from William W. Stephenson.  Her guardian, George G. Stephenson petitioned the courts on August 22 to raze the venerable Bancroft House and erect a 12-story mercantile building.  Stephenson argued that the annual income was about $20,000—“much less than it should yield if properly improved.”


Despite his attempts, young Ruth Stephenson stayed in the hotel business.

For some time American Express ran a branch office from the ground floor.  Then in 1919 Max Haber, who owned the Delmonico, Waldorf and Columbia restaurants, leased the store and basement of No. 922 Broadway where he established a restaurant and bakery.   The space would remain a restaurant for decades and in January 1927 the K & B Lunch Company took the lease for 21 years.

By the middle of the century the stretch of Broadway below 23rd Street was a bit dowdy and the once-respectable Bancroft Hotel was now called the Court Hotel—a little less respectable.


But in 1978 the upper floors were converted to four roomy “Class A” apartments per floor.   Today the street level has been mostly obliterated.  But the distinguished bulk of the hotel and its handsome slate-shingled mansard is highly unchanged from the days when gentlemen paid $1 for the best room in the house.

non-credited photographs taken by the author
Posted by Tom Miller at 3:22 AM