When Christian P. F. Holtz arrived in the United States from Hamburg, Germany in the mid-19th century, he changed his name to the more American-sounding Charles F. Holtz.  Unlike so many German immigrants in the 1850s who crowded into Little Germany on the Lower East Side of Manhattan, Holtz settled across the river in Hoboken, New Jersey.

By 1859 he had opened the Park Hotel on the corner of 4th Street and Hudson Street, described by the Internal Revenue Service as a “4th Class” hotel with three billiard tables.   In 1863, however, he had crossed the river to open a saloon-restaurant on Duane Street.  Trow’s New York City Directory listed Holtz in 1869 as a dealer in “Havana segars, champagnes, Bordeaux & Rhine wines.”

For a few years in the 1870s Holtz took on a partner, Henry Koennecke and the restaurant was coupled with an importing business.  The pair imported German and French wines and champagne, mineral water, “bitter water,” and canned goods.   Koennecke and Holtz parted ways in the mid 1880s and a new partner, Bruno Freystedt, joined the business.

Although the restaurant-saloon retained the name of Holtz Restaurant, the new Holtz & Freystedt partnership would be used for the retail and import business.  In 1896 the elderly Charles Holtz, now around 70 years old, either died or retired.  The company was re-incorporated as “Holtz & Freystedt Company of New-York City,” with a board of five investors.

That year a second Holtz Restaurant was opened at the corner of Broadway and Franklin Street.  The new directors aggressively expanded the business.    Six years later in 1902 they renovated the lower floors of the 6-story building on the corner of Broadway and Houston Street as their third restaurant location.  The Holtz Restaurants had developed from a single saloon downtown to classy, high end establishments that catered to businessmen and the well-to-do.  The New York Times called the newest restaurant “one of the finest in appointments in the city.”

In the cellar of the Broadway and Houston Street restaurant were stored thousands of cigars as well as the wine and alcohol.  Around 4:00 in the morning of June 12, 1904 smoke began wafting from the roof of the building.   Firemen were perplexed when no fire could be found, until they realized it was in the basement.  “When they at least discovered that it was in the subcellar, they lost no time in ripping up the glass sidewalks and demolishing the handsome stained glass domes over the basement entrance,” reported The New York Times.

And then came the rush of overpowering tobacco and alcohol fumes, so strong that “the firemen standing over the openings made in the sidewalk were toppled over like tenpins.”  The cigar smoke blinded the firemen, causing such pain to their eyes that “it was some time before they could see enough to make them available for service.”  Several fire fighters challenge faced the smoke and fumes to retrieve ice and seltzer and set up a make-shift bar on the opposite side of the street where overcome firemen were treated.  Cloths soaked in ice water were bound around their heads and they were given cold drinks of seltzer.

When the difficult blaze was finally subdued, the newest Holtz Restaurant was in ruins.

It would take a year before the restaurant could be reopened.  And shortly thereafter the directors laid plans for yet another Holtz Restaurant.   In 1907 the Fifth Avenue and Broadway area just south of 23rd Street was a hotbed of development.  The staid mansions of a generation earlier were gone or converted to business as residents moved uptown and commercial buildings rose.  The towering 22-story Fuller Building, known popularly as the Flatiron Building, had changed the complexion of the area in 1902.  The neighborhood teemed with businessmen and hotel patrons.  It was an ideal location for the newest Holtz Restaurant.

Philip Braender owned the property at Nos. 7 and 9 East 20th Street on the short block between Fifth Avenue and Broadway.   He commissioned architect William C. Frohne to design a 12-story loft and store building, with the lower two floors being specifically customized for Holtz.  The German-born architect had produced handsome gathering spots the German community like the Bohemian National Hall and the 1889 Schuetzen Hall.  But for this building he would turn to France for inspiration.

Completed late in 1907 the brick and stone structure was embellished with Beaux Arts carvings of garlands, wreaths, lions’ heads and scrolls.   A central, nine-story arch flanked by single openings emphasized the soaring verticality of the skyscraper.   An imperious goddess head looked down on the passersby from below a sturdy cornice.

But the Holtz Restaurant space would grab the spotlight.  Frohne lavished the two-story space with expanses of glass and at the second floor created a full wall of French windows.   Above, a decorative medallion announced “HOLTZ, flanked by a pair of odd creatures—part griffin, part cornucopia.  It was Paris on 20th Street. 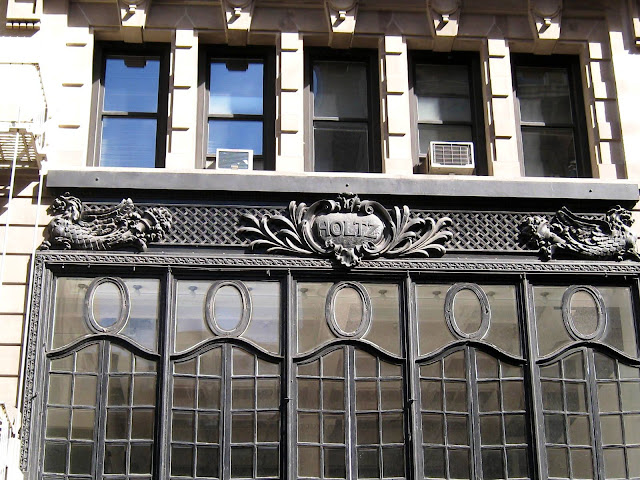 The new Holtz Restaurant opened on March 12, 1908 as commercial tenants filled the upper stories.   A. G. Thienel, manufacturer of ostrich feathers, moved in that year as did the Daisy Costume Manufacturing Co.    Before long Staheli, Reitmann & Co. would take the 5th, 6th and 8th floors for their lace curtain factory.   Barnard Rapp tried to make a go of his cloak and suit company, but it did not work.

The apparel maker began business on July 15, 1912 as a partner in Rapp & Meyer.   The partnership dissolved only four months later and Rapp continued on alone.  A year later, on August 6, 1913, he was forced to file bankruptcy.  That same year the Holtz Restaurant closed for business.

Philip Braender died in 1917, leaving an estate of just over $1 million.  On January 7, 1920 Meister Builders purchased the building from his estate, quickly flipping the property eight days later.  In the meantime, the building continued to attract apparel-related firms.  In 1921 the 8th floor was home to Babash, Kailo & Udoff, and Mendelsohn Brothers took the 2nd floor.  The following year the Belgian Waist and Dress Company took over the 5th floor.

Perhaps its side street location protected the structure from the brutal street level modernization that so many buildings in the neighborhood suffered during the mid- to late 20th century; yet Frohe’s handsome designs for the Holtz Restaurant, including the cast panel above the French windows, survive.

In 1987 the upper floors were renovated to apartments, with the exception of the 10th which became a “studio,” according to Building Department records.  Here the Castillo Theatre operated throughout the 1980s.    Now called the Holtz House, the space where cloaks, suits, dresses and lace curtains were manufactured is now 14 residences.    And where diners once savored French cuisine and champagne, a kitchen and bath showroom displays bathtubs and faucets.

photographs taken by the author.
Posted by Tom Miller at 2:32 AM