The great wave of German immigrants who settled in New York in the mid- to late 19th century included laborers skilled in trades learned at home—cabinet makers, cigar manufacturers and stone carvers among them.

Some of the stone carvers—gifted sculptors in their own right like Karl Bitter—would go on to celebrated careers.   But most labored away anonymously in the dusty cavernous workshops with scores of other carvers creating mantels, lintels and doorway surrounds.  It was grueling work that earned them a meager living to support their families. 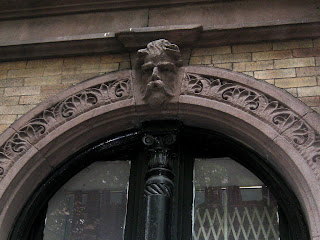 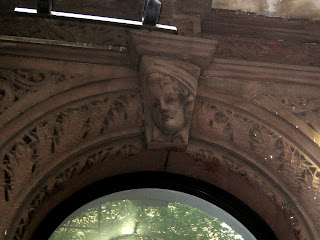 As early as 1852 a reporter for The New York Times took notice of the conditions in which the men worked.    The writer noted that while passing a stone-cutter’s yard “our attention was directed by the clinking music of mallets in the hands of a horde of busy artisans, to a few of their noble productions standing outside, which rather excited a curiosity to see more—and we walked in.  While wandering there and wondering over the many specimens, which we thought gave evidence of the surprising perfection to which the art has been brought, our attention was arrested by the occasional hacking coughs and emaciated appearances of some of the workmen; but when we saw them bending over their work, and inhaling the poisonous particles of dust created by their chisels, we thought the phenomena easily accounted for.”

The journalist consulted with a doctor who confirmed that “coughs, consumption, and other affections of the lungs have been frequently produced” from inhaling stone dust.  The Times simply advised stone carvers to “cover the mouth or face with gauze…We hope for the sake of this very useful, and respectable class of artists, that these plain hints will not be overlooked.”

At the time of the article the work of the stone carvers for the exterior of buildings was relegated mainly to reserved decorative lintels, door surrounds and cornices.   In the second half of the century their artistic talents would be more heavily taxed, including sculpted human forms.   The revived Italian Renaissance architecture brought with it busts of gods and goddesses—most often Hermes or Athena—who aloofly gazed down on passersby.

Then, with the medieval-inspired Romanesque Revival style that began sweeping the country in the 1880s fantastic heads of helmeted Vikings, warriors, kings and noblewomen appeared as carved keystones and in the elaborate capitals of carved columns.   Some buildings required dozens of faces carved from brownstone, limestone or marble.

The workshops were frenzied with the clinking of chisel against stone and, often, the advanced stone carver was given broad liberty in his creations.   Faced with producing an endless list of carved faces, he sometimes drew his inspiration from his own family or friends.   The sculptor produced unheralded, lasting images of his wife or children as elements of the new structure.

Through it all the carvers' wages did not necessarily reflect the increase in architectural sculpture.  A letter to the editor of The New York Times pleaded the case of the stone carver and his meager wages.

“A stone carver is an artist and a skillful mechanic.  He must be an expert in freehand drawing.  He must be a modeler.  Styles of at least a score of different periods in history must be common knowledge to him.  A study of nature in its various forms is necessary—foliage, flower and fruit, as well as the anatomy of the animal and the human body.  He must have an inborn and cultivated sense of harmony and contrast.  But all these studies and talents are nil if he cannot use the chisel and the mallet and the different tools of his profession on delicate and costly material for sculpture, natural stone, marble and granite.  A different technique is necessary to apply to limestone, marble, granite and sandstone.

“And after several years of concentrated effort and application, when he becomes a proficient mechanic he finds himself unable to properly care for his family.”

These artistic abilities did not go unnoticed by the wealthy real estate developers who were building New York.   Around the turn of the century it occurred to some that they, too, could be immortalized in stone on their own buildings.    In the Chelsea area alone, scores of buildings, mostly apartments, rose with the owner’s or developer’s proud face adorning the entranceway.  Suddenly entrepreneurs shared the limelight with Vikings and warriors.

Ironically, the wealthy men who posed before the poorly-paid stone carvers in order to be remembered forever achieved the same fate as the sculptors’ families—anonymity.   The wonderful stone portraits—these photographs in stone—are essentially overlooked and the names that belonged to the faces have been lost to time.

Email ThisBlogThis!Share to TwitterShare to FacebookShare to Pinterest
Labels: chelsea