The Improbable Little Survivor at No. 488 Greenwich Street

In the early decades of the 19th century, on the west side of Manhattan between the established city and Greenwich Village, the Lispenard family owned a large swath of land referred to as Lispenard’s Meadows.   The meadows were, in fact, marshy and of little value until the area just to the south was developed by Trinity Church as St. John’s Park – the most exclusive residential district in New York.
By the 1820s, Greenwich Street was the main route from New York to Greenwich Village, cutting through Lispenard’s Meadows.  When Canal Street was laid out, stretching east to west between the rivers, it included a sewer—resulting in effective drainage of the marshland.  What had been essentially worthless property was suddenly attractive real estate.
John George Rohr was a merchant tailor; a German immigrant who saw greater profits in real estate speculation than in the clothing business.  Around 1820 he began construction of small brick rowhouses along Greenwich Street on the Lispenard property.  A relative, also named John Rohr, was a mason and builder and he was most likely responsible for their construction.
In 1820 the Rohrs built three houses on the west side of Greenwich Street, northward from the corner of Canal Street.  Two more were added in 1821 and two years later the Rohrs leased six more lots to the north.
By 1826 their string of similar Federal-style, working class homes included five to the south of Canal Street and eleven to the north.   John Rohr (the builder) took ownership of the northern-most six homes in 1825 and lived in No. 498 Greenwich after 1827.  In the meantime, John G. Rohr continued with his tailoring business, joined eventually by his son, George.
Among the functional little buildings was No. 488 Greenwich Street.  Like its neighbors, it was a two and a half story house, clad in brick with a central dormer on the pitched roof.  It would appear that the house was always intended to have a business on the ground floor, and a side entrance to the upstairs living quarters.
John and Martha Rohr retained possession of the house (originally numbered No. 490) until 1837, renting it as additional income.  The early tenants came and went with surprising quickness.
James Wood, a tin and hardware dealer was here for one year, between 1824 and 1825.  He was followed by John Hannah, a copper smith, who also stayed only a year.  Grocer Anthony J. Werneken was here from 1834 to 1835.
In 1837 John and Martha transferred the property to their tailor relative, John G. and Rebecca Rohr, who conveyed it seven years later to their son, George.  George kept the property for only two years, until 1846, when it was foreclosed upon and purchased by Charles Hummel, the baker who lived next door.  Hummel had been living above his bakery in what is now No. 486 since 1831.
Hummel continued to lease his newly-acquired property to John McDermott who had been the tenant of No. 488 since 1838.  Somewhat a jack of all trades, McDermott listed himself in directories variously as a grocer, carman and smith.   By 1851 the little building was operated as a boarding house.  The proprietor managed to squeeze five working-class men into the upstairs quarters.
By now the area was bustling with small businesses serving the busy Canal Street commercial district.   Hardware dealer Robert Shiells purchased the house in 1852.  Shiells ran his hardware business until retiring in 1855 and, after his death in 1862, his two children, George and Elizabeth Shiells, held on to the property until 1870.
When the house was placed at auction in 1899, the shoreline of the Hudson River, originally only about a block to the rear of the property, had been filled in and West Street and its many piers had been constructed.  Much of the Greenwich Street area surrounding the little house at No. 488 now boasted large warehouses and factories.
Ambrose K. Ely placed the winning bid on the house, spending $6,500 for it.  Ely owned the large storage warehouses next door to the north.  The land-rich Ely family would retain the property until 1944.  How the little building and its matching neighbor next door managed to survive is inexplicable; however in 1908 two businesses were sharing No 488.  A. Allan & Son was here, advertising itself as “inventors and sole manufacturers of The Allan Metal,” an anti-friction metal.  Sharing the building was Max Schnall “rag and paper stock dealer.”
By World War I the Ohio Foundry & Manufacturing Co. of Stuebenville, Ohio had its New York office here.  A 1917 advertisement touted, “Coal and gas burning grates for fireplaces, andirons of iron and brass, baskets, screens, dampers, gas logs, etc., for fireplaces.”  The firm also operated as “jobbers of spark guards and gas fittings.”
Throughout the first half of the 20th century the house experienced a vast array of tenants.  Vito Cuoco ran a junk shop here in the 1920s, Alphonso Ruocco operated his fruit dealership from here around 1934, and a string of trucking-related firms followed—Express Carriers Corp around 1935, Tony Lupardi’s trucking company Baron’s Express Co., and V. Linetzky “truck covers” around 1939 to 1940. 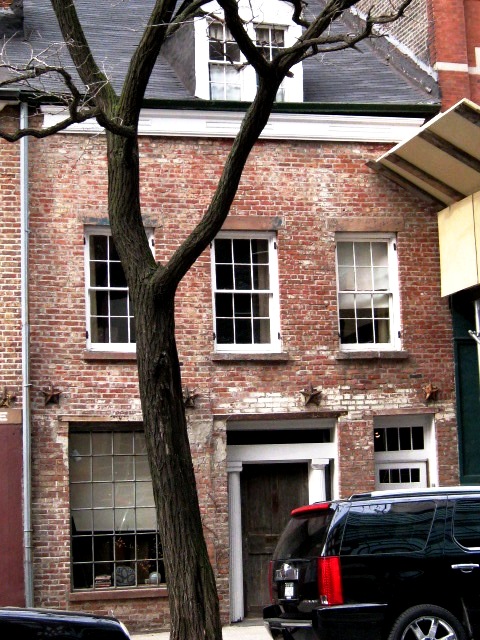 After George Drakoudes purchased the house from the Ely Estate in 1944, it was home to Metal Converters & Expeditors before becoming Eddie’s Locker Room Luncheonette around 1959.  In 1965, the year that Eddie’s moved out, the façade of No. 488 was seriously bulging out.
Normally, a pronounced bulge in the brickwork of a building is associated with a lack of ties between the walls parallel to the joists and the joists behind.  When John Rohr constructed the little house in the 1820s iron ties were unheard of.  Yet at some point in the 19th century the flaw apparently became apparent, because long tie rods had been retrofitted with large cast iron stars lining up on the brickwork below the second floor. 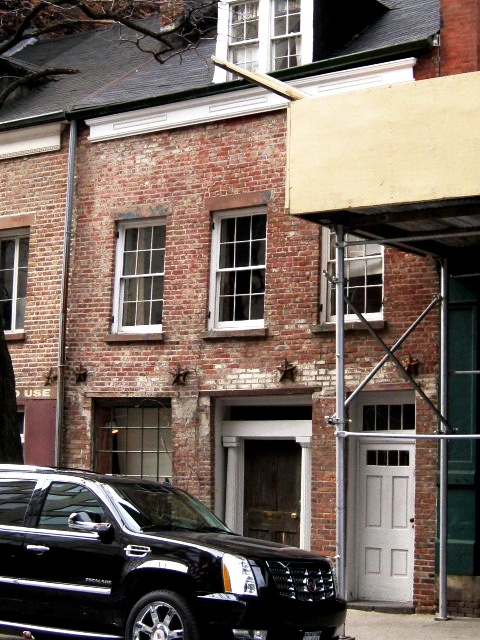 The Department of Buildings ordered that the dangerous problem be corrected.  The entire brick façade was removed and, amazingly, refaced using the original historic bricks--most likely an economic rather than preservationist decision.  A year later the owner of the house next door, James Johnston, Sr., purchased No. 488.  Johnston had run his business, A. Johnston & Son Iron Works, from No. 486 since 1953.

The amazing little survivor at No. 488 was purchased in 1975 by John and Joanne Hendricks, along with No. 486.  The Hendricks restored the facades and returned the upstairs of No. 488 to residential use for the first time in over a century.  Today the delightful and surprising little building is home to the Hendricks while the first floor functions as Joanne Hendrick’s bookstore selling rare cookbooks.
Although its near-match next door at No. 486 also survives, it has been more seriously altered.

non-credited photographs taken by the author
Posted by Tom Miller at 2:59 AM