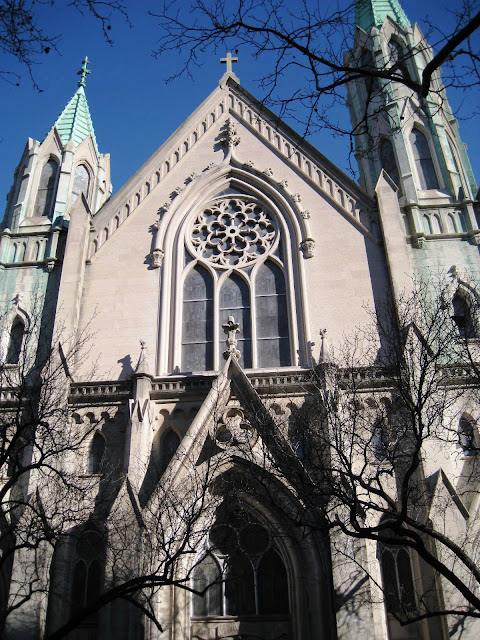 Although the great influx of German immigrants into New York City would not begin until the 1850s, there was a significant population as early as the 18th century.  On August 22, 1841 a group of German Lutherans were organized by the Rev. F. W. Geissenhainer as the “German United Evangelical Lutheran Church of the City of New York.”
While the bulk of German immigrants settled on the Lower East Side, in what would become known as Kleindeutchland, or Little Germany, this congregation established its church on the West Side, at the corner of 6th Avenue and 15th Street.  The church was dedicated in 1842, only to be razed 18 years later.  A new building was completed on the same site in 1861; but after 37 years of use it, too, would be demolished.
Under the leadership of the German-born Rev. Leo Koenig, the parish grew and prospered.  Koenig spearheaded the relocation of the church slightly uptown to the Chelsea area, a neighborhood of mixed cultures and nationalities.
In 1897 the property was sold for $190,000 and on June 30 congregant Jacob Klingenstein purchased three old buildings at Nos. 313, 313-1/2, and 315 West 22nd Street for the new building site.  Klingenstein spent a total of $41,800 for the land.
On the afternoon of July 4, 1897 the cornerstone for the new building was laid, with Rev. Koenig personally placing the mortar below the stone.  In the stone was placed a tin box containing coins, current newspapers and church documents. 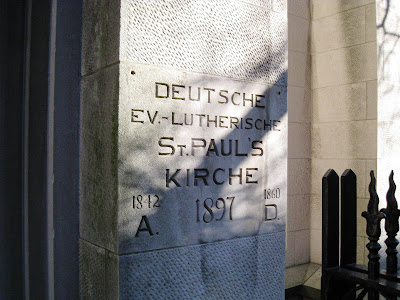 The New York Times pronounced that the new structure would be “of Gothic architecture, and is to have two spires, one somewhat taller than the other.  There will be placed over the entrance a large memorial window.”
German-born architect Francis A. Minuth designed the new church building.   Minuth used Indiana limestone which gleamed like marble against the streetscape of brownstone rowhouses.    Dedicated on February 13, 1898, the church, which could accommodate between 650 and 700 worshipers, cost a total of $150,000—leaving the treasury with an admirable endowment of $50,000 from the sale of the old property.
With the dedication, the church changed its name to the German Evangelical Lutheran Church of St. Paul in the City of New York.
In reporting on the dedication, The Times noted that “both interior and exterior [are] in Ionic style.”  The newspaper had gotten the architectural style right the first time.  It was by all means Gothic Revival with a visually-appealing symmetrical façade, its balance broken only by the divergent heights of the two steeples.  The taller spire towered 126 feet from the pavement. 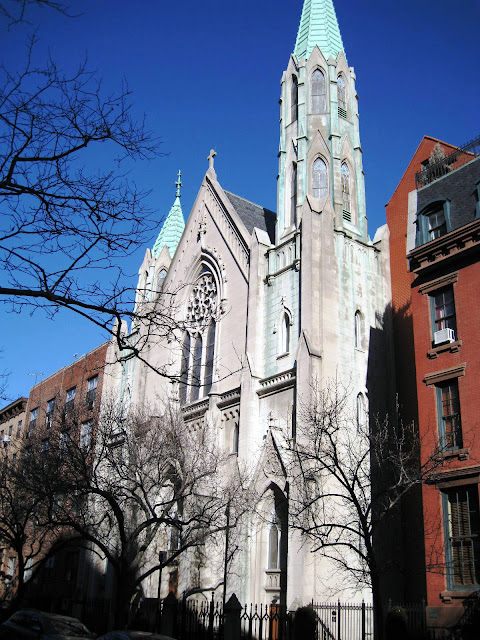 Inside, five memorial windows ringed the apse, executed by Mayer & Co. of Munich.  They were presented to the church as a memorial to the first pastor F. W. Geissenheiner, by his children and two parishioners, H. G. Mohlman and N. Betjeman.  The brass altar lights and crucifix were also imported from Munich, a gift of Rev. Koenig.

Heavy, clustered columns pierced the galleries, rising to the groin-vaulted ceiling.  Fronting the large rose window, the stenciled pipes of the Jardine & Son organ, which cost $3,140, formed a colorful screen.
The outbreak of war in Europe in 1914 marked especially troubling times for German congregations and neighborhoods throughout the city.  Tensions increased as German-Americans were viewed with suspicion with the United States’ entry into the conflict in 1917.
It was during this disturbing time that Rev. Leo Koenig reclined on his sofa at 80 West 12th Street to take a nap on the afternoon of October 13, 1919.  The man who had led his congregation for four decades and spearheaded the to move to West 22nd Street died quietly in his sleep.
As the war faded into memory and the Jazz Age transformed the globe, the unconventional Baron Ehrenfried Guenther Freiherr von Huenefeld – known as “The Crazy Baron”—took off from Ireland in a monoplane for New York City on April 12, 1928.  With him was an Irish pilot, Major James C. Fitzmaurice, and an American, Floyd Bennet.
A day later the pair crash landed on a frozen lake on Greenly Island, Newfoundland; somewhat successfully completing the first East to West transatlantic flight.  The weight of the airplane broke the ice and the craft with its damaged propeller partially sunk; but it was later recovered.
The pilots were eventually rescued and transported to New York City where cheering masses awaited.   But before the triumphant reception and President Calvin Coolidge’s presentation of the Distinguished Flying Cross, which would be attended by over 2 million people on May 17, Baron von Huenefeld went to church.
On May 6 the baron attended the 10:30 service at St. Paul’s.    It was an exciting day for the congregation.  The President of the Lutheran Synod of New York and New England was in attendance to greet the aviator on behalf pf the New York Lutheran Ministers’ Association.  The New York Times, the day before, promised that “The birdman will deliver a brief address in German to the congregation.”
The disturbing threat of war with Germany once again loomed as the Rev. Henry Paul Suhr was installed as pastor on the morning of June 23, 1940.  In the German language service, vague references to the uncomfortable state of Anglo-German relations were made.   The visiting Rev. Heinz. W. H. Kuegler spoke of the pastor’s responsibility to preserve the church as an institution of Christian truth “regardless of world events and circumstances.”  And Rev. Thomas Honiger prayed that “God’s joy may still remain in human hearts even in the midst of darkness.”
The following year, after Germany declared war on the United States, the church was prohibited from publishing its newsletter in German.   Following the war, St. Paul’s was deeply involved in relief efforts for the war victims in Germany.   By the end of 1945 the congregation raised over $10,500 and gathered thousands of pounds of clothing.
As the 20th century wore on, most ethnic communities diluted as immigrant cultures became absorbed.  Yet unlike the other German churches of Manhattan, the congregation of St. Paul’s remained mainly German, and is the last remaining parish that offers an entirely German service.  It is a welcome find for German tourists seeking worship services in their native language. 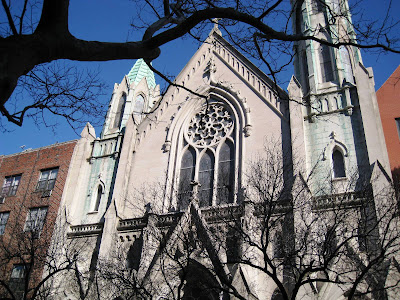 In 1994 the century-old organ was repaired and rebuilt and in 2005 the parish began a five-year, $1.6 million renovation and restoration of the structure.   Included were steeple repair, structural steel work, and masonry restoration.  At the same time, updating of electrical, lighting and heating and air conditioning systems were addressed.
The impressive white stone church stands as a living monument to an immigrant population that continues to thrive in its new home, despite occasional obstacles and hardships.

non-credited photographs taken by the author
Posted by Tom Miller at 3:42 AM