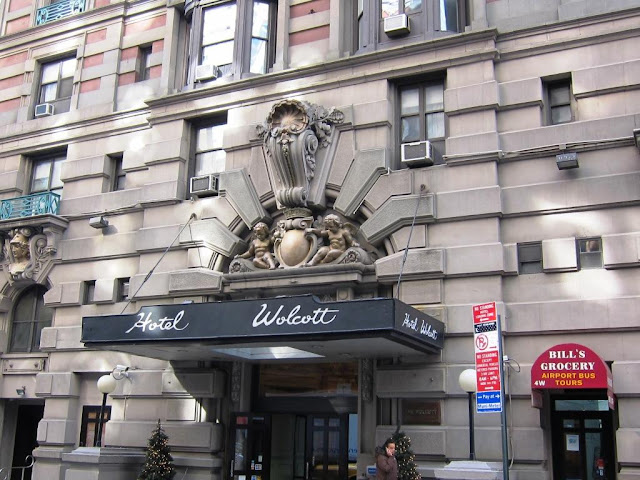 At the turn of the century, when Fifth Avenue in the 30s was being transformed from an area of mansions to a high-end commercial district—spurred by the construction of the hulking Waldorf-Astoria Hotel on the site of the Astor houses—apartment living still carried the stigma of the tenement.

One way developers evaded this taint was to build “residence hotels.”   Tenants availed themselves of the freedom from maintaining a private house, enjoyed the full services of a hotel staff, and avoided being branded as apartment dwellers.

Among the first of the stylish hotels just off Fifth Avenue was the Hotel Wolcott at No. 4 West 31st Street.  It was the latest venture by James H. Breslin who had been in the hotel business since the Civil War.  Breslin’s extensive experience with the best hotels in New York, including the Fifth Avenue and Gilsey House Hotels, provided him with the acumen to cater to the wealthiest and most demanding of guests.

The hotelier became known for his  list of guidelines for men in the hotel trade:
Work.
Don't grow old.
Keep good natured.
Don't forget names and faces.
Stick to honest dealing.
Remember that cleanliness is next to godliness.
Keep pace with the times if you can't keep a little ahead of them.
Keep your old employees around you so that when old friends enter your door they will feel as though they were getting back home.

The new hotel was designed by John Duncan; a twelve-story Beaux Arts confection dripping with carved garlands, heavy scrolled brackets and over-sized sculptures.  One- and two-story dormers broke the surface of the towering mansard roof and the lobby was like entering Versailles.

Named after Henry Roger Wolcott, a Senator from Colorado, the hotel opened on May 1, 1904.  Among those looking over the 300 rooms were eminent politicians like Representative Charles Arnette Towne and former Governor Frank S. Black.

The brochure at the time of the opening boasted a bathroom with every suite.  “The rooms are big enough, but not too big.  Comfortable, not barny,” it said.   The brochure spoke of the freshness of the Cape Cod oysters and the “little chickens that come unplucked from the Jersey farms,” to be had in the restaurant.
But it was service that Breslin knew would impress his upper-crust clientele.  “There is always a servant glad to do just what you want done, in just the way you want it done, at your command on the instant.  Never a servant to annoy you with superfluous attention.”

The brochure promised “A valet always at hand to brush your clothes and press them.  A ladies’ maid deft in the hooking up of delicate gowns.  If you like your trunk will be unpacked when you come, and packed again when you go.”
James Breslin introduced a service taken for granted today: the supplying of miniature toiletries, bathrobes and other often-forgotten necessities.  “A white cravat or hairpin, a tooth-brush, or a welcome knot of fresh chiffon.  A bath-robe or a night dress—spick and span in a sealed envelope.  An umbrella for a rainy day.  Fresh brushes and combs—indeed everything that the difficulties of one guest suggest, has been provided, against the possibility of a like difficulty again.”


The up-to-date hotel offered a telephone in every room, connected to the main office, which could “connect with every other telephone everywhere."
The level of accommodations is evident in that the room rates remained for years nearly identical to those charged at the Waldorf-Astoria.  On opening day a room with bath ranged from $3.00 upward; a suite of drawing room, bedroom and bath from $8.00.  Servants rooms were $2.00 with an additional $1.50 for meals.   (In 1917 both the Waldorf and the Wolcott were charging $5.00 a night for a double with bath.)


The proximity to Fifth Avenue and the Waldorf-Astoria attracted wealthy transient guests, as well as long-time residents.   On October 21, 1905 Mrs. Calderon Carlisle, of Washington DC, and her daughter checked into rooms 608, 609 and 610.   The following Wednesday evening when the women attended the theater, Mrs. Carlisle wore a pair of large pearl earrings and a matching pearl necklace--this at a time when matched pearls were as costly as diamonds.
The following afternoon, around 2:00, Mrs. Carlisle opened the silver jewelry box on her dresser.  Her pearl earrings were gone.  Further investigation revealed that the necklace, valued at around $5,000, was also missing, along with other items—a total theft of around $10,000.

It was not the sort of publicity the relatively new hotel needed.  The management hoped to keep news out of the press and away from potential, rich patrons.   While the house detective was put on the case, the police were not notified, causing The New York Times to pronounce an “attempt to hush it up.”
Indeed the victim was not of much help either.  When the police heard of the crime and sent a detective to investigate, the Washington socialite “told Detective Brueck very little about the robbery, resenting what she called the interference of the police,” said The Times.

On March 31, 1906 James H. Breslin died in his rooms at the Hotel Wolcott.  The 72-year old had suffered from Bright’s disease for more than a year.  Two years later, George T. Stockham purchased the lease and furnishings of the hotel.  Stockham had been manager of the Hotel Breslin nearby on Broadway which opened the same year as the Wolcott.
Among the permanent guests at the time was John Griffin Carlisle, a retired politician whose distinguished career included the post of Secretary of the Treasury under Grover Cleveland.  Others included General Jose de Zayas and his wife, a wealthy retired Cuban merchant.  The couple spent their winters here and summered in Paris.

Robert c. Rathbone, known  as the “dean of the insurance business in New York City,” lived here at the same time as Philip J. Dwyer, a “notable horse figure” in the city.
The hotel became a yearly meeting place for the American League baseball owners around 1910.  It was here that year that R. L. Hedges announced to the League that he would sell his majority interest in the St. Louis Browns baseball club.  The New York Tribune reported that “It was estimated that the sum involved would mount well into six figures.”

An even bigger sensation was caused in 1918.  The Times reported that “A prolonged whispering discussion between Manager Miller Huggins of the Yankees and President Frank Navin of the Detroit Club caused a flurry among the baseball men assembled at the Hotel Wolcott yesterday and started the sensational report that Ty Cobb might be tempted to wear a Yankee uniform next season.”
Despite the somewhat less-than-genteel atmosphere of baseball talks, the Hotel Wolcott continued to be a destination for wealthy travelers.  And it also continued, therefore, to be attractive to jewel thieves.

On April 19, 1920 John A. DeKay, editor of the Montreal Spur, and his wife returned to their rooms after an early dinner.  They found one of their trunks open and a jewel case containing gems and cash missing.  The total value of the items stolen was around $10,000.  Detectives suspected the guest who was registered in the room next door, whom The Times described as a “swarthy, stocky man of about 30 years.”  When the hotel intercepted a telegram from the man’s wife with a return address in upstate New York, the police were on his tail.

Although the 31st Street neighborhood experienced a decline after the middle of the 20th century, and the Wolcott along with it, the area revived with the dawn of the 21st.  The hotel underwent an extensive renovation and restoration of the façade, bringing the rooms onto par with modern hotels while retaining the grandeur of James Breslin’s 1904 showplace.