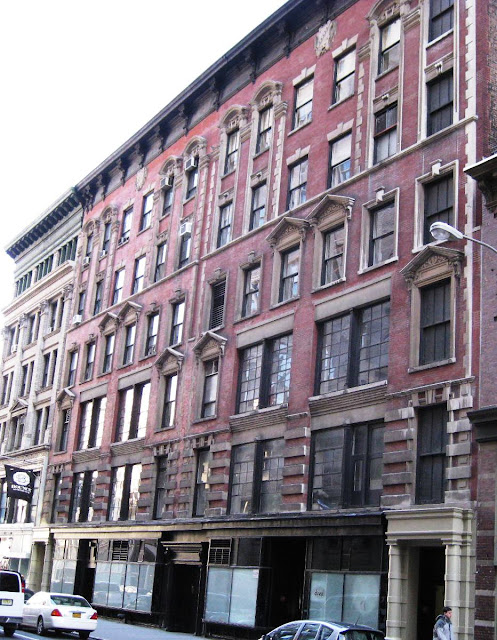 Until 1901 the Evangelical Lutheran Church stood on the north side of West 21st Street between 5th and 6th Avenues.  Smart brownstone residences lined the street, the last remnants of the block’s genteel history that was quickly coming to an end.
By now Fifth Avenue in the area was commercial and many of the 21st Street homes had been converted for business purposes.  Where the Lutheran Church had been were now two industrial loft buildings stretching from No. 45 to 51.
Meanwhile, further downtown on at Nos. 105-113 Wooster Street was the office and factory building of D. E. Sicher & Co.   The firm had begun in 1872 with three sewing machine operators and grew to be the largest women’s underwear manufacturers in the world.  By now it employed 3,000 workers who turned out “muslin drawers” and other feminine under garments.
When one of the loft buildings on West 21st Street was heavily damaged by fire in 1908, Dudley D. Sicher, president of D. E. Sicher, jumped on the opportunity.  On September 13 the New York Tribune reported that the company purchased both buildings.
Three days later The New York Times added its take.  “The removal of this concern…from Wooster Street to Twenty-first Street is a striking illustration of the northward migration from the older mercantile district,” it said, “and will probably be not without influence in bringing about other removals.”  The article projected that Sicher would spent about $100,000 to renovate the building and install its new factory.

The firm hired architects Goldwin, Starrett & Van Vleck to re-do the damaged building.   Completed in February 1909, it was an exceptionally handsome industrial structure.  Composed of red brick with limestone trim, it rose six floors from the pavement.  Two heavy stone entrances flanked the long salesroom space at street level.  The upper floors were dedicated to office and factory space.  Expansive windows on the second and third floors allowed sunlight to flood into the work areas.  Contrasting with the red brick were carved limestone pediments and window framing, and quoins.

Dudley Sicher would earn a reputation through his concern of workers’ safety and conditions.  His input was evident here.  “In these workrooms many new devices will be employed both for disposing of waste materials and adding to the building’s sanitary and fireproof qualities,” reported The Times.
The new building also boasted its own “light, power, and ventilating plants.”

The workers who filled the upper floors of the Sicher Building were mostly untrained, uneducated immigrants; many of them girls in their late teens.  Working conditions for sewing girls at the beginning of the century were often brutal.  As labor unions rose up against harsh owners and managers, strikes crippled production.  The result was often vicious retaliation by management.


Sicher, on the other hand, was compassionate.  In 1912 he pleaded with other factory owners to participate in collective bargaining and to recognize the union.  His own workers, accustomed to wages above scale, ultimately refused to join the labor organizations and Sicher’s factory paradoxically became a union shop in principle and an open shop in practice.  He introduced the idea of a company cafeteria and a “clubroom” in which workers had “community sings” to alleviate the monotony of their work day.
In the spring of 1913 the garment industry was hit with a general strike.  Rather than bristle at the workers’ insolence, Dudley Sicher was moved.   Years later he would recall that one of his earliest memories was of his father lugging a bucket of coal up five flights of stairs to keep his six or seven employees warm in the winter.  It was a legacy he would carry with him throughout his life. 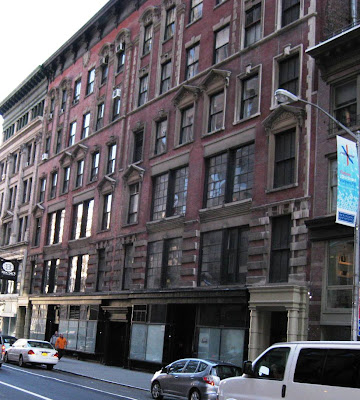 On March 26, at a dinner of the Cotton Garment Manufacturers of New York, he read aloud a poem he had composed during the strike.  His hope was to inspire the other members “to recognize their obligations and responsibilities toward their employees.”
Sicher’s poem was entitled “The Dawn of a Better Day” and included lines such as:


Let us wipe the slate of the bitter score,
Let us turn the blotted page,
And grant that we owe our workers more
Than the dole of a “living wage.”
They give us more than their time and skill
In the health and strength they spend,
And earn the right to the kindly will
And helpful hand of a friend.
We must give them more than the coin we pay
Ere we hail the Dawn of a Better Day.
That same year Sicher was overtaken with an innovative and unheard of idea.   Strikes could be avoided, he decided, if the workers were educated.  Paid schooling for the immigrant girls was his solution.
“The idea came to me when the strike was on,” he told a reporter for The Evening World.  He explained that the Irish-American, German-American and “plain American” workers who had at least an elementary education “stuck by us—even sent a committee to assure the firm they had no complaint.”

In the meantime, the handsome exterior of the D. E. Sicher & Co. building – where muslin drawers were sewn and immigrant girls learned English—is essentially unchanged.

non-credited photographs taken by the author
Posted by Tom Miller at 3:16 AM