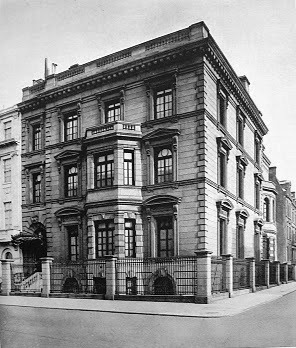 Richard Arnold was the founder of the Arnold & Constable dry goods store, the oldest department store in the country.   Early in the morning of April 10, 1886, 61 years after he opened his first store, his private funeral service was held in the parlor of his stately residence at No. 1020 Fifth Avenue.   Sitting on the corner of 83rd Street facing Central Park, the house was thirty blocks north of Millionaires' Row.
The Arnold house sat vacant nearly 14 years before being purchased by the Chairman of the Board of Directors of the Baltimore and Ohio Railroad, William Salomon.  The sale caught the notice of real estate investors.  As The New York Times noted “the extensive alterations and improvements to the old Arnold property at Fifth Avenue and Eighty-third Street, it may be assumed, will have an equally beneficial effect in that section.”

The “alterations and improvements” of the Arnold house were eagerly anticipated by the millionaires whose grand mansions, by now, lined the blocks nearby.   The long period of neglect since Arnold’s death resulted in a near-eyesore in the highly-exclusive neighborhood.  A later article in The Times remarked “the purchase of the old Arnold house…by William Salomon for a residence, means the early rehabilitation of a property which, while always intrinsically valuable, has not in its present condition been of any especial benefit to that neighborhood.”

William Salomon, however, had no intention of making “extensive alterations and improvements” to the venerable Arnold mansion.  He envisioned a completely new and more impressive home.  Two months after purchasing the house, he bought the two adjoining plots on the avenue, giving him a massive building site 102.2 by 100 feet.

In 1901, as construction began on the house, Salomon resigned from the Baltimore and Ohio and a year later founded the international banking house of William Salomon and Company.

It would be take a full six years before the new structure was completed.  In the meantime the Salomons spent the greater part of their time in Europe.  While in town, rather than stay in their existing mansion at 615 Fifth Avenue at 50th Street, now surrounded by hotels and exclusive retail stores, they took rooms at the Savoy.

Finally in 1906 the Salomons moved into their new $1.3 million home next door to the Frederick W. Vanderbilt mansion.  On February 27, Mrs. Salomon, the former Helen N. Forbes, celebrated with “one of the most brilliant musicals of the season,” according to The Times.  The newspaper noted that “Their house shows the fruits of their European travels in the multitude of its art treasures and bric-a-brac.”

The fruits of the couple’s travels were evident in the interior detailing as well.  Antique architectural marble and “overdoors of great beauty” painted by the 18th century Italian artist Giovanni Battista Tiepolo were installed in the new house, as reported in The Times.  Antique tapestries covered the marble walls of the sweeping grand staircase under an ornate domed skylight and intricately-carved coffered ceilings embellished the dining room.

Concerts and musicales were among Mrs. Salomon’s favorite entertainments.  On March 24, 1909 she hosted a charity concert that included the most noted operatic soprano of the day, Madame Calve.  The Sun reported on another evening musical in March 1914 that highlighted Metropolitan Opera diva Madame Alda as soloist.

Among the glittering social events in the house was a cotillion thrown for the debutante daughter of Mr. and Mrs. George G. Haven, Jr., Leila, on February 7, 1910.  The 200 guests began arriving at 11:00 pm (Edwardian society fêtes were normally late-night affairs; the fabulously wealthy could afford to sleep in) and couples danced in two salons.  While supper was served at 1:00 am in the palm and dining rooms, Nahan Franko’s entire orchestra played on.

In 1914 Germany invaded neutral Belgium, dragging that country into the World War I.   Mrs. Salomon opened her home to Countess de Hemptinne of Belgium to help.   Wealthy socialites were invited to view and purchase rare Belgian laces including a large Venitienne tablecloth valued at $1,500.  The proceeds of the sale went to the relief of Belgian women.

On December 14, 1919, the 68-year old William Salomon died in his marble-walled mansion at No. 1020 Fifth Avenue.  On Tuesday December 23 his funeral was held in the house.

Four years later the Salomon house was emptied of its antiques, paintings and “bric-a-brac.”  In the third largest auction of its kind in the United States to date, decades of the Salomons’ discriminating collecting went under the hammer.

The New York Times spoke of “French 18th century objects of art, including pictures, some of them of a quality not equaled in the museums."   Four Fragonard paintings had never been offered at public sale before.  Salomon’s paintings alone sold for over $1 million.

The most unexpected factor of the auction was the executors’ idea of offering the great Salomon mansion for sale among the artwork and antiques.   Auctioneer Thomas E. Kirby extolled the interior fittings of the house as artwork “valued by experts at not less than $500,000” alone.    He opened bidding at $900,000.

There was no response.
Kirby offered, “I will listen earnestly if you make any kind of bid.  I will listen to a bid from any gentleman or from any lady.”

There was, again, no response.

No one, in 1923, was interested in the incomparable Salomon mansion.

A year later in May 1924, the house sold.    Developer Michael E. Paterno bought the house for $2.5 million and immediately announced that he would join Louis Gorden Hamersley in erecting a modern apartment house.  Before the end of the year, the magnificent William Salomon mansion – just 18 years old – was razed.  The 13-story a penthouse apartment building on the site designed by Frank Bessler, Jr. was completed in 1927.
Posted by Tom Miller at 4:01 AM